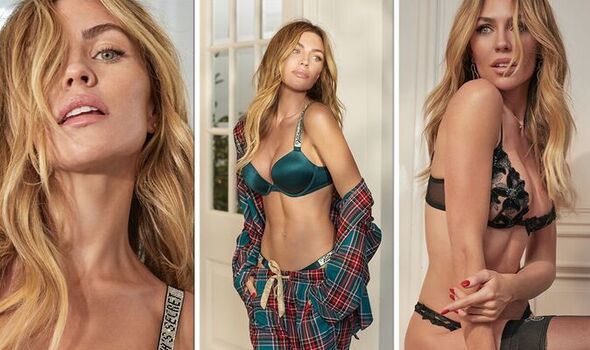 Abbey Clancy, 36, has now become part of the global Share The Joy campaign in the run-up to the festive season.

Abbey Clancy, 36, has now become part of the localised UK Share The Joy campaign in the run-up to the festive season.

The model posed in lacey and racy lingerie and showed off some snuggly holiday-themed pyjamas too.

She even took to Instagram to show off one matching set of plain black underwear.

The model shared the photos with her 519,000 followers, promoting the new holiday campaign.

Although viewers could be deceived by her toned abs, Abbey has three young children with her husband, former footballer Peter Crouch.

Featuring in Victoria’s Secret Holiday edit, the model showed off an array of lingerie, underwear and pyjamas.

Abbey Clancy appeared sun-kissed in the dead of winter

Posing in slivers of sunlight, Abbey let her golden locks dangle around her face.

Abbey Clancy took to social media with some of the photos

She proudly posted this matching black underwear set on Instagram.

As Abbey told her Instagram followers: “My new holiday campaign with Victoria Secret out now.”

Abbey Clancy featured in the Share The Joy campaign

The holiday campaign celebrates togetherness and the spirit of the season.