Her character Carrie Bradshaw is known for having the best fashion sense.

But Sarah Jessica Parker was rocking quite the zany look while filming her the Sex and The City reboot And Just Like That with Cynthia Nixon, 56, on Wednesday.

The actress, 57, appeared to be shooting a Halloween scene in Brooklyn’s Prospect Park as she donned a bold and bright look that looked straight out of the 80s. 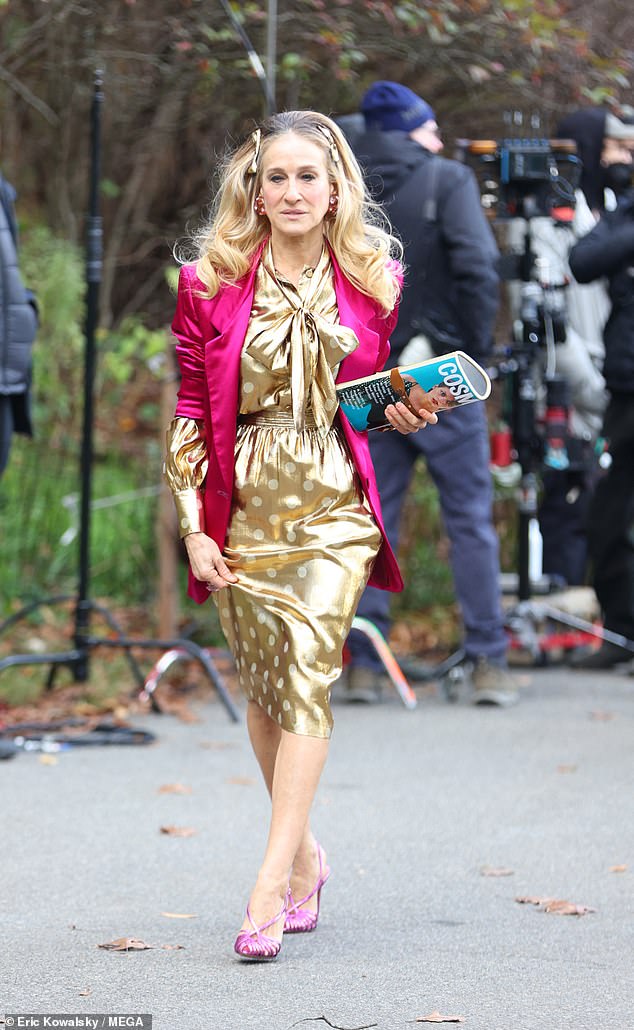 No missing her! Sarah Jessica Parker was rocking quite the zany look while filming her the Sex and The City reboot And Just Like That on Wednesday

There was no missing Sarah in her hot pink blazer worn over a gold polka dot dress.

She carried a copy of Cosmopolitan magazine and wore her blonde hair tousled in a voluminous ‘do that was jazzed up by two metallic bow clips.

Taking things up another notch, she rocked a very elaborate pair of pink jewel earrings and strutted about in lilac heels.

Sarah shot scenes with co-star Cynthia as various extras milled about, all dressed in costumes ranging from Harry Potter to a hot dog.

Sharing the spotlight! Sarah shot scenes with co-star Cynthia Nixon as various extras milled about, all dressed in costumes ranging from Harry Potter to a hot dog 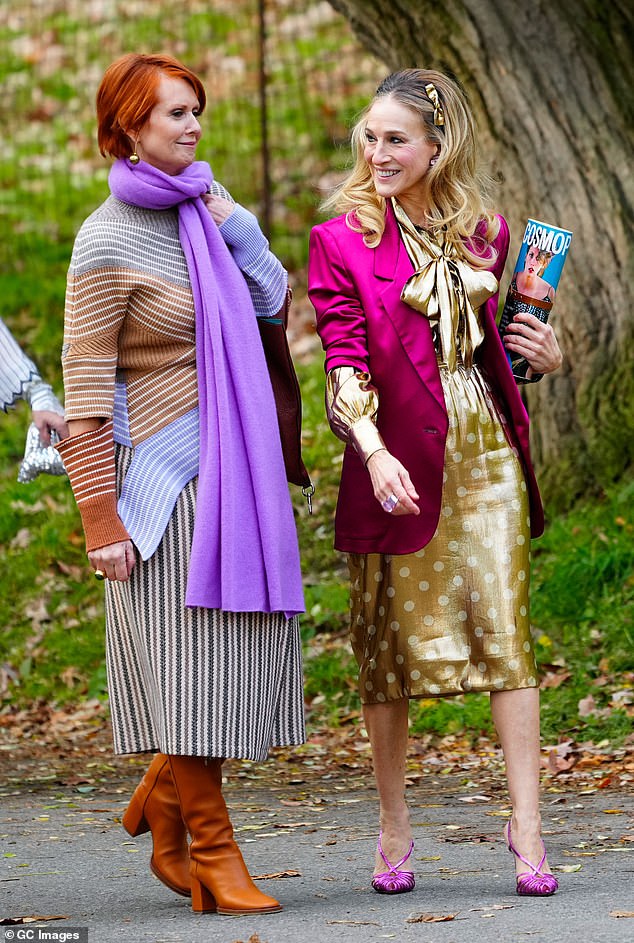 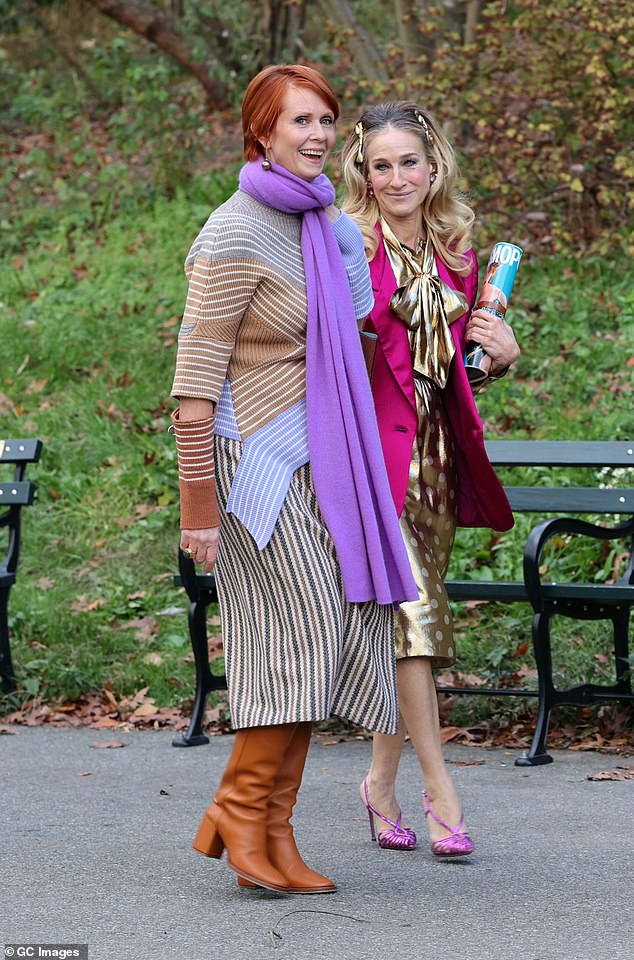 Cynthia’s character, Miranda Hobbes, didn’t seem to be in the Halloween spirit as she stepped out dressed in regular wear.

The wardrobe for the HBO Max show has come under serious scrutiny after fashion icon Patricia Field, who styled Sex And The City for its six seasons and the two movies, declined to return due to her work on Emily In Paris.

One fan commented: ‘Carrie did not dress like this in the series, in SATC. Whoever is dressing her for this new show, has a bigger budget and whole different look in mind. I don’t like it. She looks like a fancy hobo. 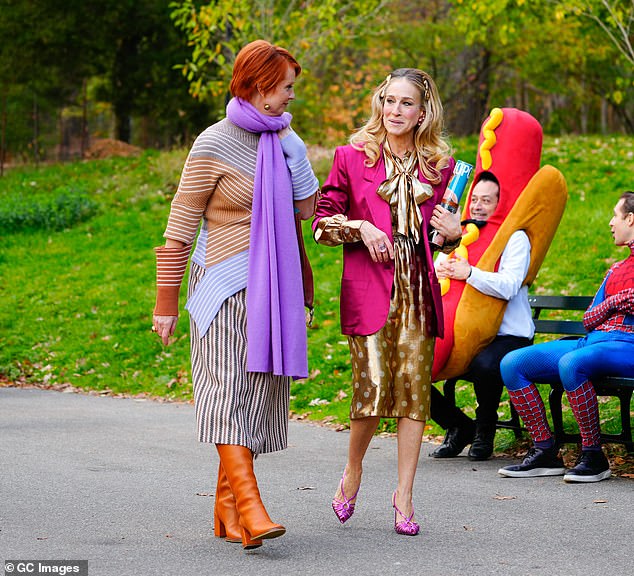 Boo! Extras milled about, all dressed in costumes ranging from a hot dog to Spider-Man 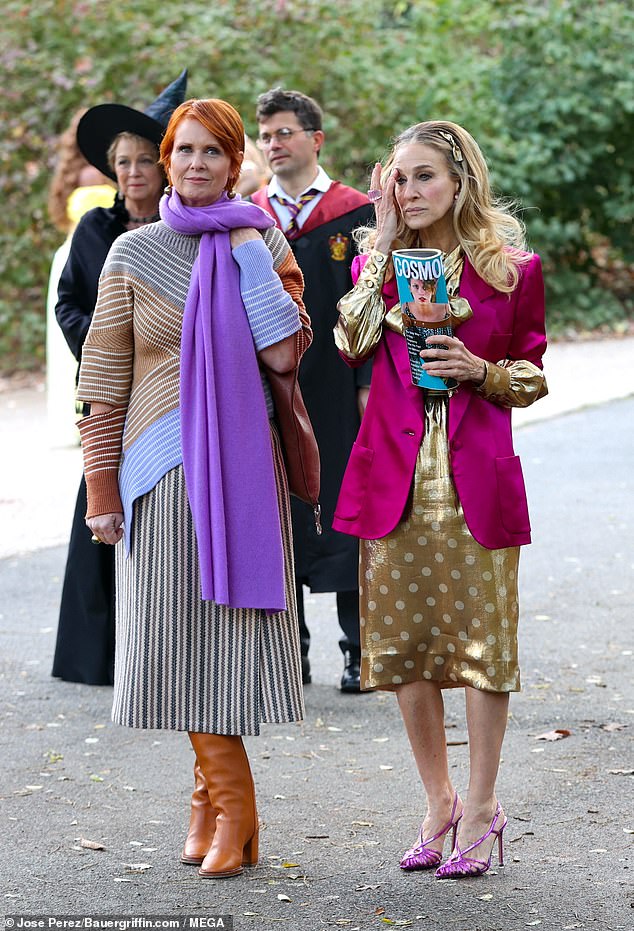 Happy Halloween? One man was seen dressed in Harry Potter apparel while another extra wore a witch costume

Another wrote: ‘I love Carrie Bradshaw, always have! I just watched the whole series and both movies and her style is STILL iconic.

‘However in the new series, her style is not that of an older Carrie Bradshaw. Please bring back Carrie’s iconic style!

A third typed: ‘We know her character is mid 50s and today’s mid 50s are super stylish! I respectfully beg of you… please style her up like her fans are waiting for 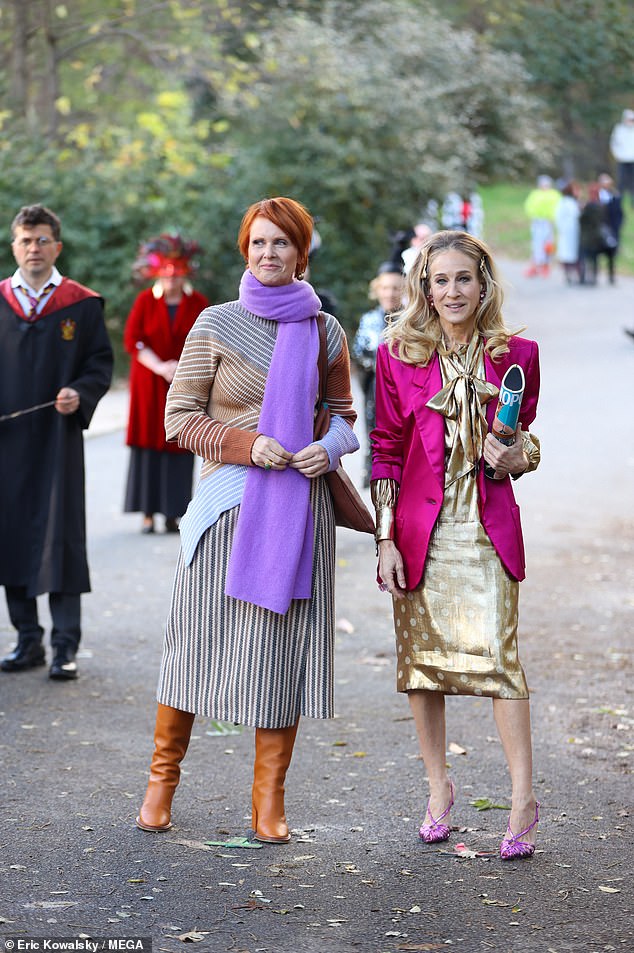 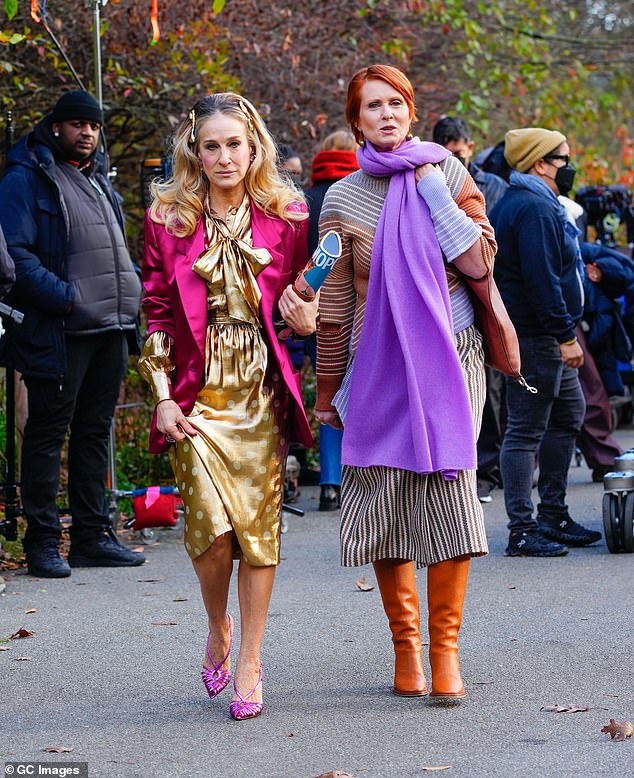 Lights, camera, action: The women strode past the film crew

Another wrote: ‘I hate how Hollywood makes them feel like once you get older you cannot show skin. Yes you can like Sam did in the old Sex and The City!’

Others wrote ‘So covered up, it’s nice but I do miss Carrie with her short dresses and showing off her shoulders’ and ‘Who said that looked good?’

Some followers came out in support of the star, saying: ‘She’s always so fabulous. I LOVE HER! Gorgeous as usual’ and ‘OMG this look slayyyyysss.’

For her work on Sex And The City, Field was nominated for five Emmy Awards, winning one, and six Costume Designers Guild Awards, with four wins. 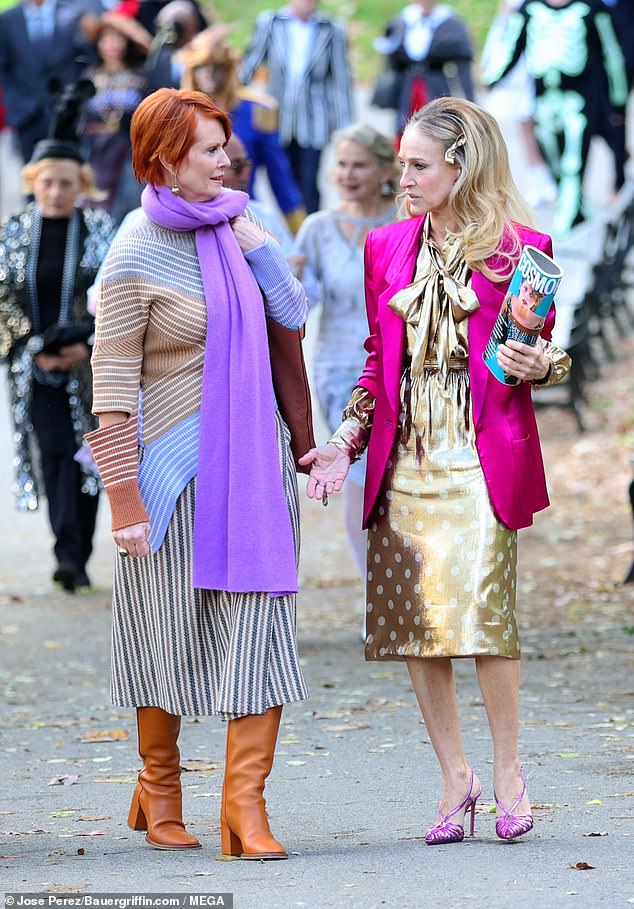 Chit chat: The women caught up during their stroll

She went on to return as costume designer for the Sex And The City movie (2008) and the sequel (2010), however she was unable to reprise her role for the reboot due to her Emily In Paris commitments.

Last month Patricia returned to the set to meet up with SATC and AJLT showrunner Michael Patrick King.

The fashion icon, 80, posed up with a chair bearing the show’s name – amid her continued friendship with SJP’s nemesis and ex co-star Kim Cattrall.

Patricia is known for her close friendship with ex SATC star Kim, 66, who played the iconic Samantha Jones, but exited the franchise acrimoniously due to her feud with Parker.

Patricia has publicly pledged her allegiance with Kim since the show ended, and in December last year, said she is interested in doing a series with her,

The two-time Emmy winner told Page Six: ‘I would love to do a show with [Kim].’ 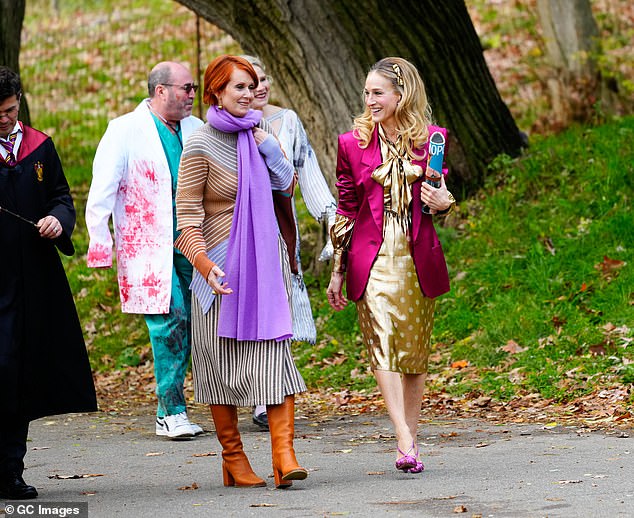