Adele tickets sell out in minutes and get resold for THOUSANDS

Fans of Adele were left sorely disappointed after tickets to her upcoming Las Vegas residency were priced sky-high on the resale market after selling out in minutes.

Ticket sales for the 33-year-old singer’s commenced on Wednesday for a select group of people using Ticketmaster’s Verified Fan program, but the tickets were quickly resold, with prices ranging from over $1,000 to more than $37,000.

The original tickets apparently sold for as little as $85 before fees were added in, though it’s unclear how many fans may have been able to access those cheapest tickets. 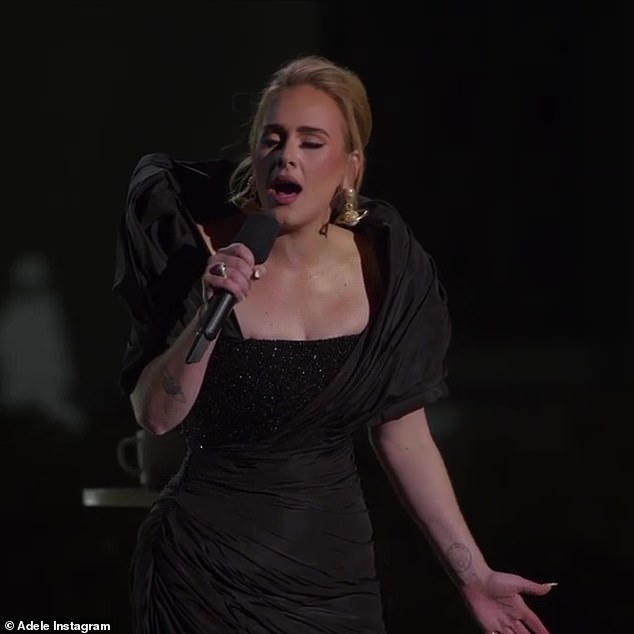 Sky-high prices: Tickets to Adele’s Las Vegas residency sold out within minutes and were resold for between $1,000 and $37,000 on the secondary market

Because of the extremely high demand for tickets, sales at the box office at The Colosseum at Caesar’s Palace had been cut off, and a regular ticket sale wasn’t offered.

Interested fans had to sign up for Ticketmaster’s Verified Fan presale, and only some applicants received codes to give them entry to the presale.

According to Touring Data, Adele’s Las Vegas residency tickets ranged from $85 to $685, and fans confirmed similar prices on social media. 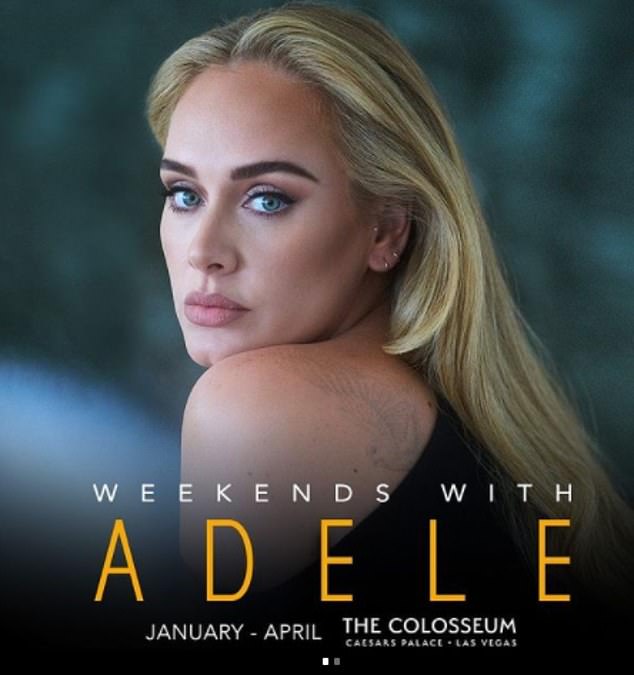 In the blink of an eye: Fans were only able to purchase tickets online on Wednesday via Ticketmaster’s Verified Fan presale, but not all people who gained access could buy tickets before they sold out in minutes 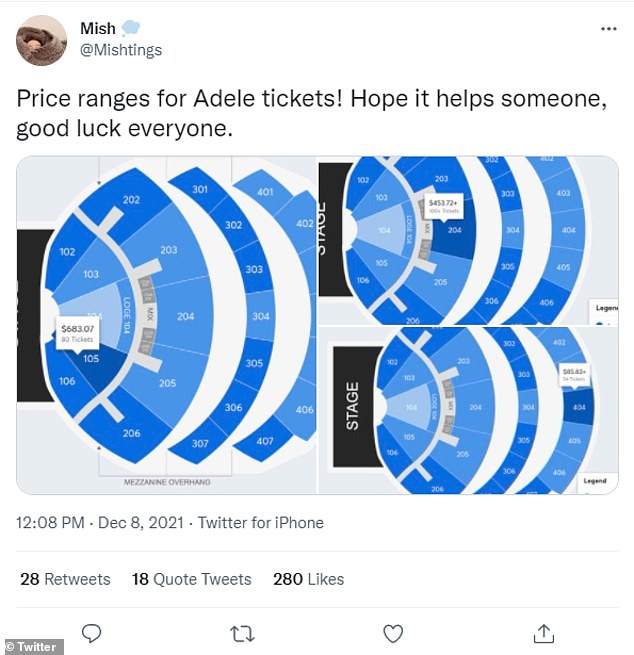 Big range: One fan shared a screenshot of prices that appeared to show the cheapest seats for $85 before fees, while seats close to the stage cost over $680

However, due to the incredible demand and the dynamic pricing, it appears some fans were forced to pay hundreds more to purchase the cheapest tickets, and that was before Ticketmaster’s fees were added into the equation.

One Twitter user shared a video of Adele and wrote: ‘Me searching for the mythical $85 tickets to Adele the moment I got to the front of the line only to find that Ticketmaster’s evil dynamic pricing scheme had boosted the nosebleed seats to $316 + fees.’

Over on the ticket resale site StubHub, tickets to some of Adele’s residency shows could be found for just over $1,000, but the prices quickly rose.

The priciest tickets for several concerts were just under $20,000, and the highest ticket on any of the shows appeared to cost more than $37,000 once all of the fees were included.

Considering Adele’s popularity among other celebrities, it’s also likely that the songstress has a chunk of reserved for her VIP guests and high-profile fans that weren’t offered to regular concertgoers.

One of her fans on social media poked fun at how unaffordable tickets were for anyone who wasn’t lucky enough to get them during the presale.

‘Adele tickets 4K??? HELLO FROM THE PARKING LOTTTT,’ they joked. 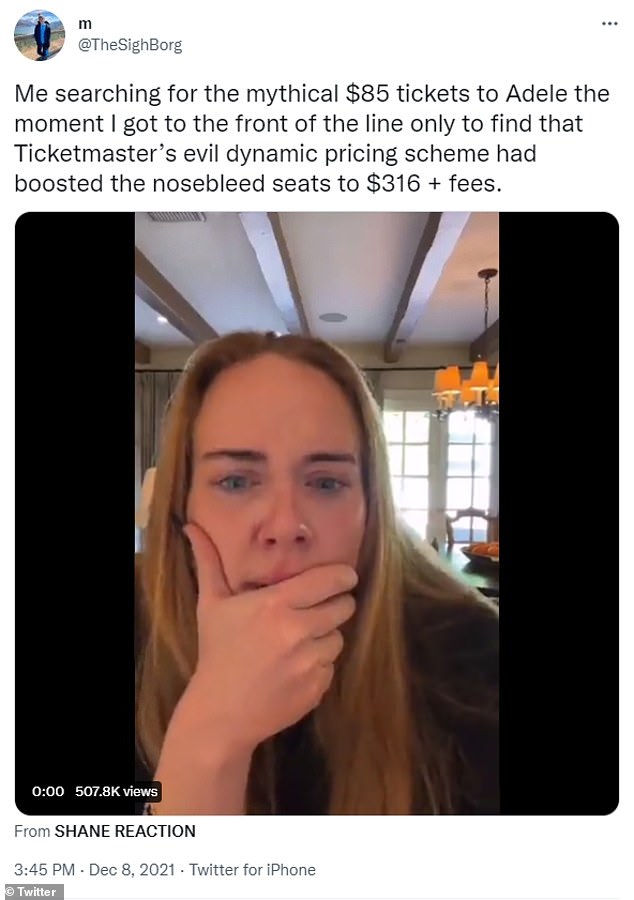 Sticker shock: Due to high demand and dynamic pricing, some fans were forced to pay hundreds more to purchase the cheapest tickets, even before fees were added

Nosebleed seats: One of her fans on social media poked fun at how unaffordable tickets were for anyone who wasn’t lucky enough to get them during the presale

Other called out resellers for buying tickets at their lowest prices and reselling them for many times their face value.

‘If you bought the Adele tickets on Ticketmaster as a Verified fan just to flip & resell them for more money, I wish nothing but the worst for you! That’s was not the point of her trying to keep fans at getting tickets for an Honest Price [sic],’ one person tweeted.

Some fans blamed Adele for scheduling too few concerts for the residency, as opposed to a tour, which might have included more shows.

‘Adele and her team watching fans fight for 4000 tickets knowing she could’ve done a bigger tour,’ one person complained while including a video of rappers Nicki Minaj and Doja Cat laughing. 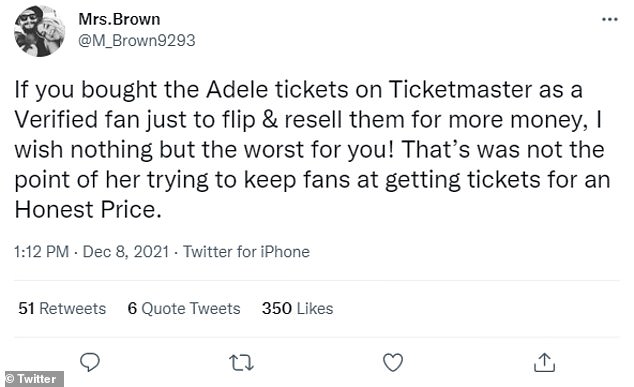 Furious: Some fans called out resellers for buying tickets at their lowest prices and reselling them for many times their face value 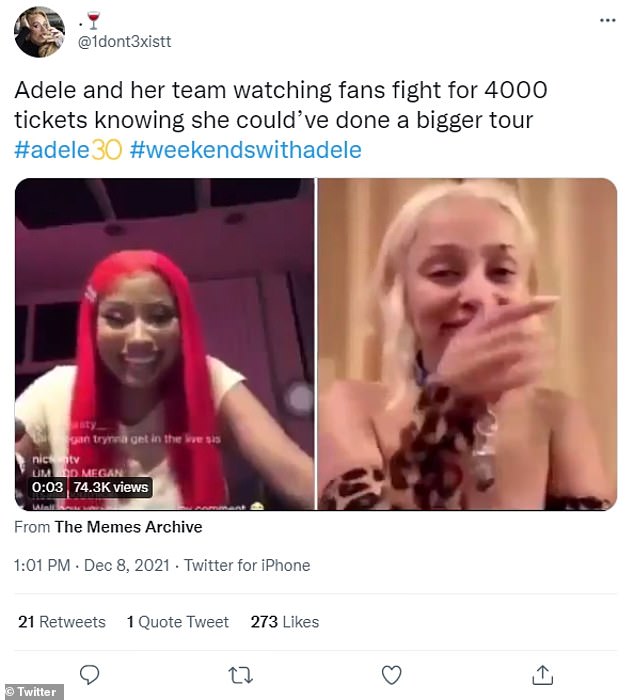 Limited supply: Other blamed Adele for scheduling too few concerts for the residency, as opposed to a tour, which might have included more shows

Although some fans were angered by the dynamic pricing on the initial presale, Ticketmaster uses the system as a deterrent against ticket scalpers.

By raising the price of in-demand tickets, it can make those tickets less appealing to sellers looking to buy up tickets on the cheap before boosting the price on the secondary market.

Earlier this year, InsideHook theorized that dynamic pricing had become more popular with artists as they try to increase their profits after sales plummeted in the early days of the ongoing coronavirus pandemic.

Artists who sell tickets through Ticketmaster have the option to skip dynamic pricing, but it may be a more attractive option now after a year of little to know revenue from concerts.