Amy Adams looked unrecognizable on the set of her latest comedy, Nightb***h.

The actress, 48, who plays a stay-at-home mother who fears she is turning into a dog, looked worlds away from red carpet glamour in a billowing striped shirt and oversized trousers.

She appeared to be without a stitch of makeup as she shot scenes for the flick in Los Angeles on Tuesday. 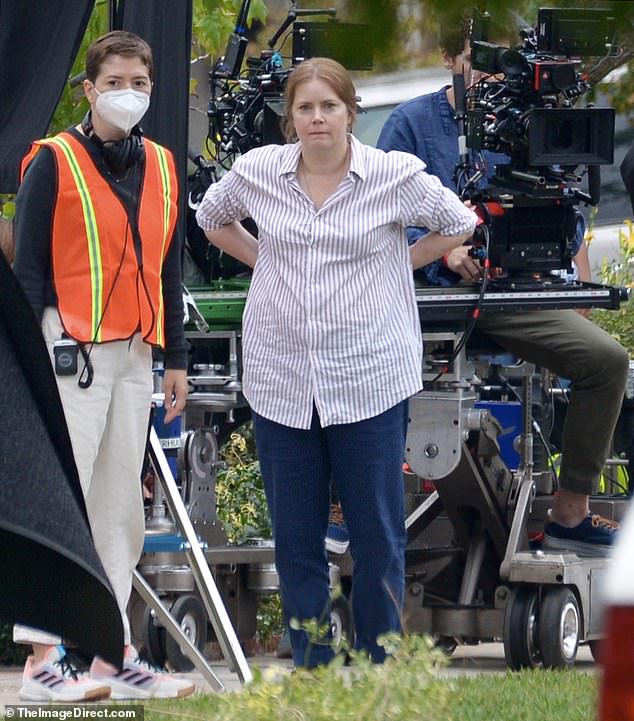 Trading in the glam: Amy Adams looked unrecognizable on the set of her latest comedy, Nightb***h, in Los Angeles on Tuesday

The actress was also outfitted in a pair of brown Birkenstocks.

She shot a scene which saw her slap co-star Scoot McNairy across the face.

The American Hustle actress expressed not an ounce of anger as she struck her co-star though did appear to have a tinge of sadness cross her face.

The duo were also seen holding hands as they stood across one another with cameras rolling.

Nothing fancy: Adams wore a striped button down and loose blue trousers (left, Amy is seen at the 2019 Vanity Fair Oscars party in one of her more glamorous looks)

Amy appeared to be in a more pleasant mood as she crouched on the ground and rested her hands on her knees with a smile on her face.

According to Variety, the film follows ‘a suburban mom thrown into the stay-at-home routine of raising a toddler.

‘As she embraces the feral power deeply rooted in motherhood, she becomes increasingly aware of the bizarre and undeniable signs that she may be turning into a dog.’ 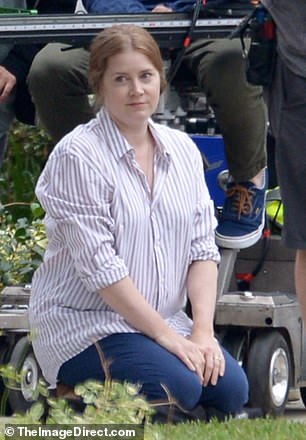 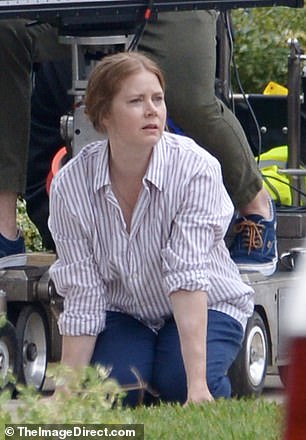 Throwing herself into character: The star appeared to be in a more pleasant mood as she crouched on the ground and rested her hands on her knees with a smile on her face 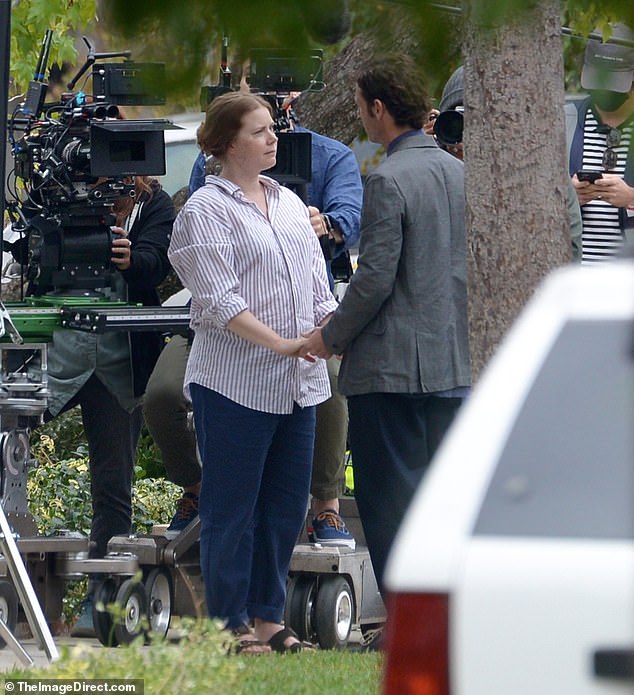 Eye to eye: The duo were also seen holding hands as they stood across one another with cameras rolling

That’s got to hurt! Adams filmed a scene in which she slapped her co-star Scoot McNairy across the face

The latest sighting of Amy comes after her former American Hustle co-star Christian Bale revealed he had acted as a ‘mediator’ between Adams and David O. Russell on the contentious set of the 2013 crime comedy American Hustle.

Years ago a leaked email from the Sony hacks alleged that David ‘abused’ Amy to the point where Christian had to step in. She herself has since described feeling ‘devastated’ on the set of the film ‘most’ days.

Now Christian confirmed previous claims that he got involved when tensions broke out between Amy and her director: ‘If I can have some sense of understanding of where it’s coming from, then I do tend to attempt to be a mediator,’ Christian claimed.

‘That’s just in my nature, to try to say: “Hey, come on, let’s go and sit down and figure that out. There’s gotta be a way of making this all work.”‘