Barbara Corcoran APOLOGIZES over fat-shaming joke on The View

‘I just want to say I really am very sorry’: Shark Tank’s Barbara Corcoran APOLOGIZES for fat-shaming joke she aimed at Whoopi Goldberg on The View

Shark Tank personality Barbara Corcoran has apologized to Whoopi Goldberg after she was accused of ‘fat-shaming’ The View host by making a snide remark about her jeans size during an appearance on the show.

The 72-year-old businesswoman came under furious fire on Thursday after joking that she could ‘make two pairs’ of jeans for herself out of a single pair that would fit Goldberg, 65.

In the wake of the online backlash, Corcoran took to Twitter hours after her appearance on the panel show to issue a public apology to Goldberg, admitting that the comment she made ‘wasn’t funny’.

‘I just came back from The View and saw my old friend, Whoopi,’ Corcoran said at the start of the video. ‘As you well know, she has a phenomenal sense of humor and I’ve known Whoopi for years.

‘I made a joke at Whoopi’s expense that I now realize wasn’t funny. For anyone who I may have offended unintentionally, I just wanted to say I really am very sorry.’ 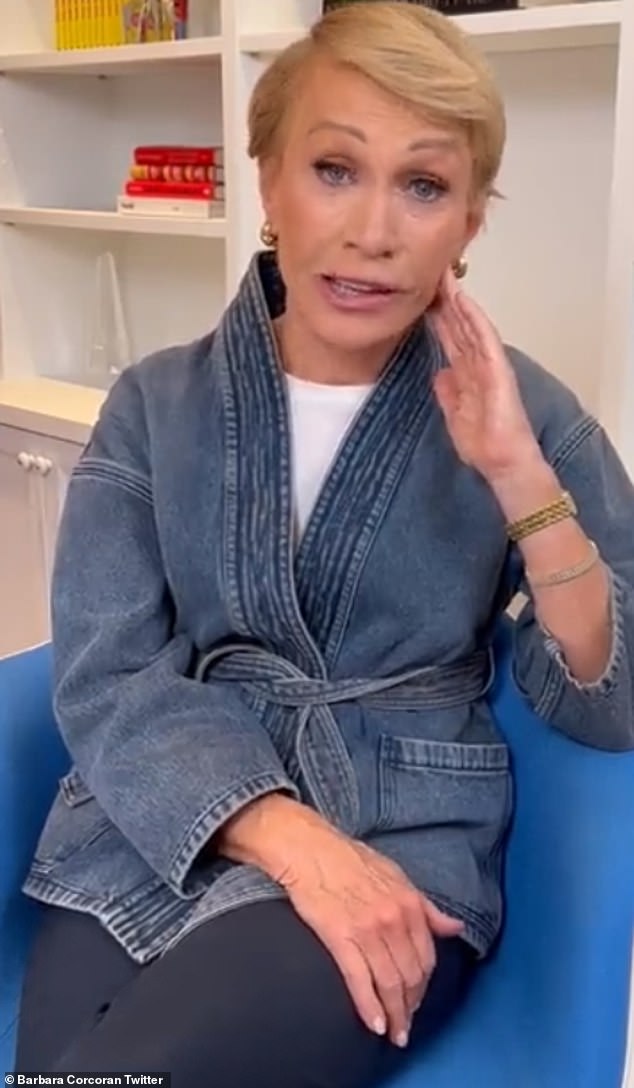 The latest: Shark Tank personality Barbara Corcoran, 72, has apologized to Whoopi Goldberg after fans commented that remarks she made to The View host amounted to fat-shaming 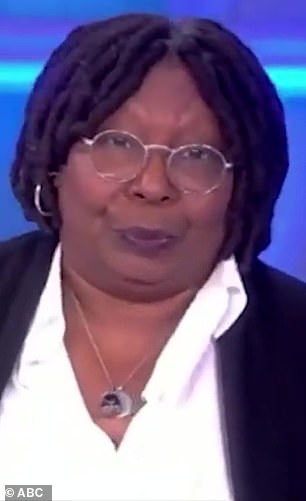 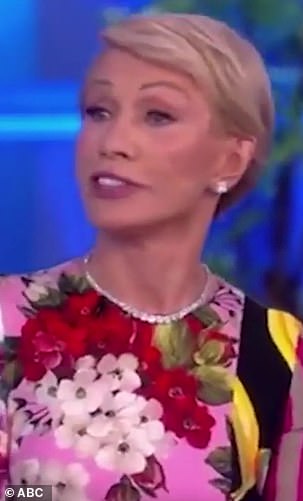 During an appearance on The View on Thursday, Corcoran told Goldberg that she could ‘make two pairs’ of jeans for herself out of a single pair of the TV host’s pants

Though Corcoran may have been hoping to shut down any further online criticism with her video, it actually had the opposite effect among many social media users, who were quick to hit out at the way in which she worded her video.

A number called attention to the way in which she address ‘those I may have offended’, with one person insisting that Corcoran’s use of the phrase ‘lends responsibility on the listener’, rather than taking ownership of her own mistake.

‘”To those I may [have] offended” is not an apology,’ the Twitter user wrote in response to Corcoran’s video.

‘It lends responsibility on the listener and implies they may be the one lacking a sense of humor. Take full responsibility and lead with only yourself.’

Another user shared an example of how they felt Corcoran should have apologized, writing: ‘I said something rude to Whoopi that may have hurt her feelings and likely hurt the feelings of several other people, whether they are overweight, love someone who is overweight, or are just good people.

‘Body-shaming is unkind, and I am sorry for what I said.’

Other Twitter users called out the hypocrisy of Corcoran’s comment to Goldberg – which was made just minutes after the Shark Tank founder spoke to the panel about how social media makes young women feel as though they have to meet impossible body standards.

‘The prior segment was referencing social media and young girls having to live up to certain body image standards,’ the person wrote.

‘You just spoke about instilling positivity to your own daughter and then did this to Whoopi. Be better Barbara!’

Having discussed the impact that social media has on young girls’ body image, Goldberg then turned her attention to the denim brand, jokingly questioning whether the label’s jeans would fit ‘her COVID butt’.

‘Will they fit this… COVID,’ Goldberg gestured while alluding to her backside. ‘Just thought I would ask.’

After everyone agreed that the size-inclusive range of denim was of high quality and promoted healthy body images, Corcoran jumped in.

‘And when you get finished with those jeans, and decide you don’t like them, give them to me. I’m gonna make two pairs!’ Corcoran said. 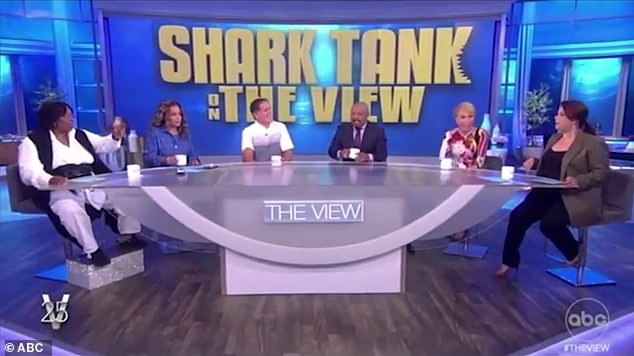 Talk about it: The 72-year-old famed investor sat among the panel to discuss the first black female guest Shark, Emme Gred, of the denim brand Good American joining the show 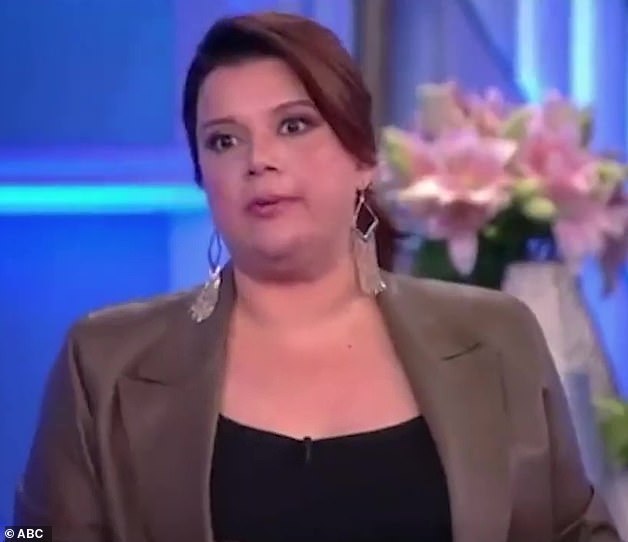 ‘Whoopi, let me just tell you something,’ Navarro said. ‘Both Sara Haines and Jill Biden wore that dress already, on TV’ 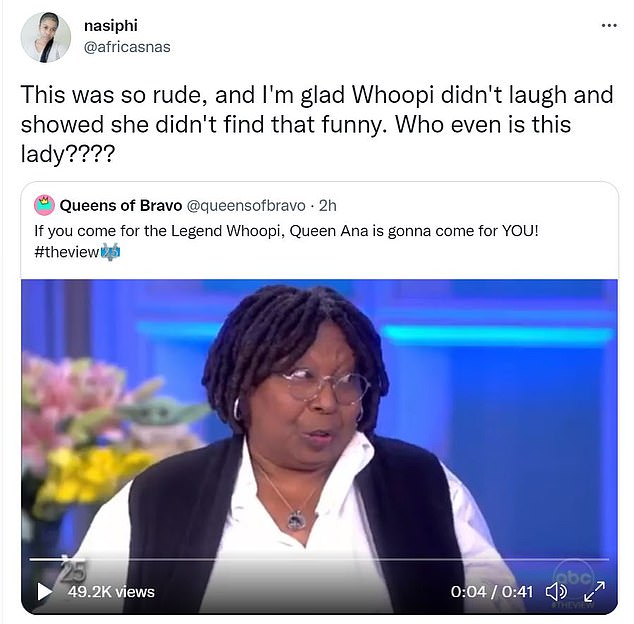 ‘This was so rude, and I’m glad Whoopi didn’t laugh and showed she didn’t find that funny,’ @africasnas wrote. ‘Who even is this lady????’

Goldberg went silent as the crowd booed against the shocking remark, while Navarro was instantly ready to defend her – by offering up her own dig aimed at Corcoran.

‘Whoopi, let me just tell you something,’ Navarro said, interjecting. ‘Both Sara Haines and Jill Biden wore that dress already, on TV.’

Navarro was calling out Corcoran’s fashion faux pas in a bid to get even with the Shark – and it worked – as Corcoran looked shocked, put her hands firmly on her hips and snapped: ‘That’s not true.’

But then Navarro appeared to double down on the fact that Goldberg had just been fat-shamed by Corcoran, by pointedly adding: ‘Donald Trump Jr. tried that on me. It didn’t work! No, no no.’

She was referring to the fact that Donald Trump Jr. had tried to fat-shame Navarro last month when she had a false positive test for COVID, and Trump Jr. tweeted that it was time to talk about ‘obesity.’

Navarro hit back at Trump Jr. with a stinging tweet, which included: ‘If you want to have a conversation about the effects of obesity on people with COVID, your dad is a phone call away… assuming he answers your calls.’ 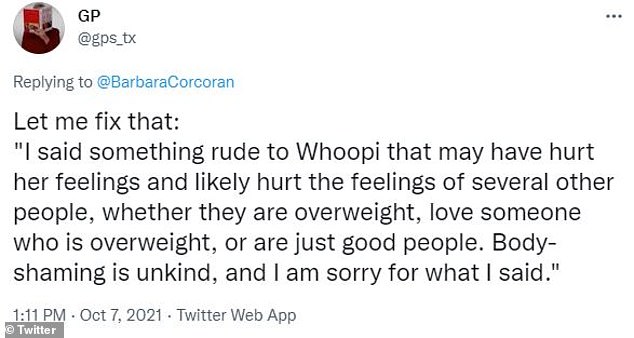 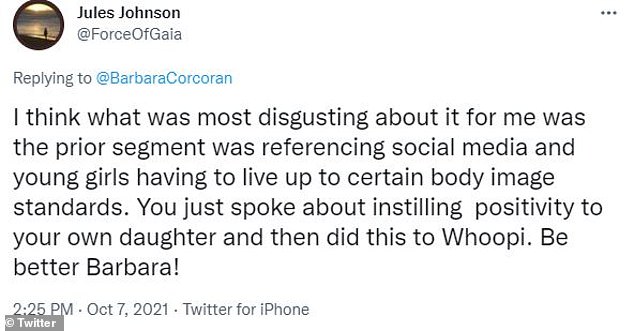 Meanwhile, fans were initially shocked by Corcoran’s callous comment and took to Twitter to criticize the businesswoman.

‘Did I really just see what I saw on @theview?’ one user wrote. ‘I’m trying to not be about #CancelCulture but @BarbaraCorcoran you pushed it. How unladylike of you to insult @WhoopiGoldberg How undignified!’

‘This was so rude, and I’m glad Whoopi didn’t laugh and showed she didn’t find that funny,’ @africasnas wrote. ‘Who even is this lady????’

The video shared was a clip posted by Queen of Bravo, who wrote: ‘If you come for the Legend Whoopi, Queen Ana is gonna come for YOU!’

‘NOT TODAY SATAN!!!,’ @RoccoReyna1 wrote. ‘@ananavarro showed @BarbaraCorcoran not to mess with an EGOT.. the disrespect towards @WhoopiGoldberg was first class TRASH!!!’ 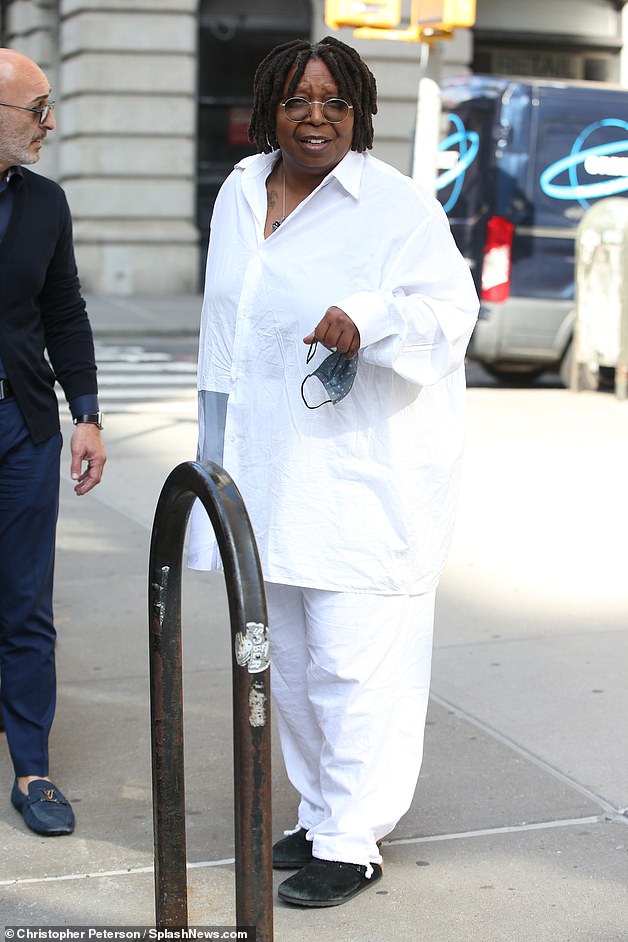 No harm: Whoopi was later spotted outside the studio in Manhattan wearing a classic white button down with matching slacks 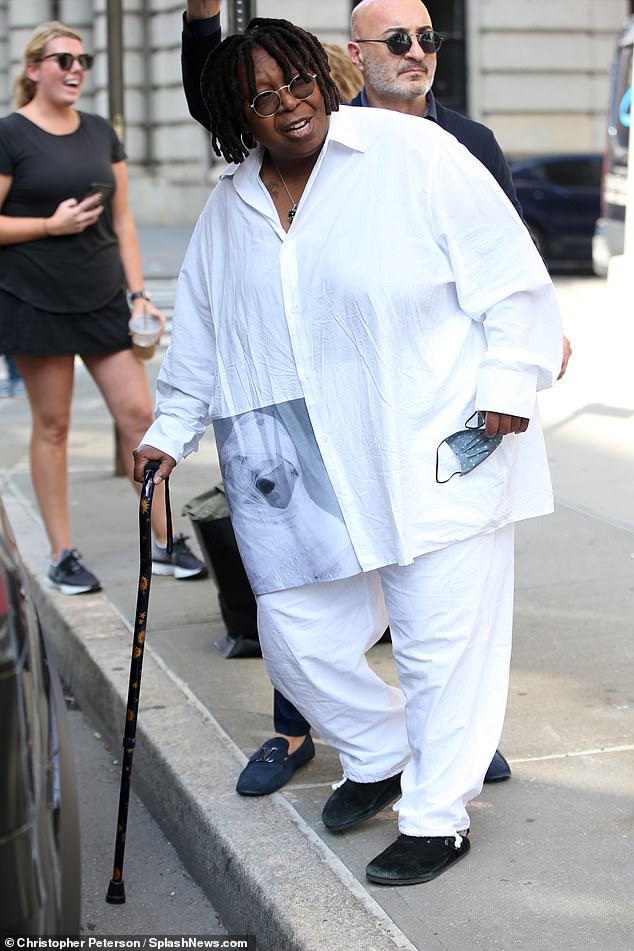 Best around: She appeared to be in good spirits despite the tense commentary on the morning talk show where she has been at the helm since 2007

Whoopi was later spotted outside the studio in Manhattan wearing a classic white button down with matching slacks as she walked with a cane for mobility assistance due to sciatic issues.

She appeared to be in good spirits despite the tense commentary on the morning talk show where she has been at the helm since 2007.

Whoopi has endured health struggles this year and was forced to take time off from The View in June because of sciatica, which is a painful condition that effects mobility as the nerve runs from your back down each leg.

‘Yes, it’s me, I’m back. I’m back. I was out because I was dealing with something called sciatica, which is basically a bulging disc in your back and it impacts the sciatic nerve, which sends pain down your leg,’ she shared online.

‘It’s like a bad boyfriend, a bad boyfriend who came back to mess with me. There I was trying to move my leg. Impossible to do. And it was really horrible. I’m glad to be here. I had a walker which kind of freaked me out. I didn’t know that I needed it. That first step with the walker, this is my new best friend. I’m just gliding along. That’s what happened to me.’ 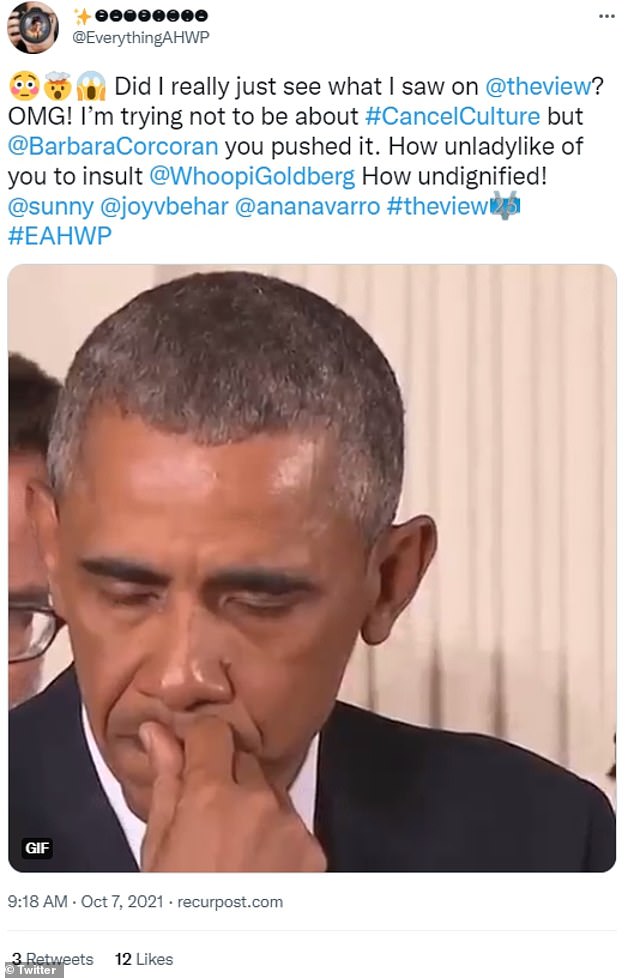 ‘Did I really just see what I saw on @theview?’ one user wrote. ‘I’m trying to not be about #CancelCulture but @BarbaraCorcoran you pushed it. How unladylike of you to insult @WhoopiGoldberg How undignified!’ 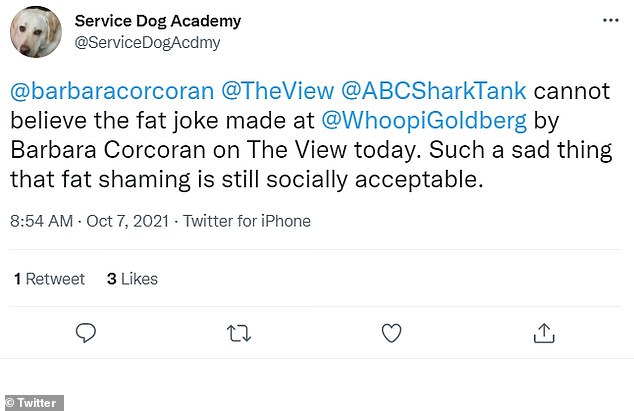 ‘Cannot believe the fat joke made at @WhoopiGoldberg by Barbara Corcoran on The View today,’ Twitter user @ServiceDogAcdmy wrote. ‘Such a sad thing that fat shaming is still socially acceptable’ 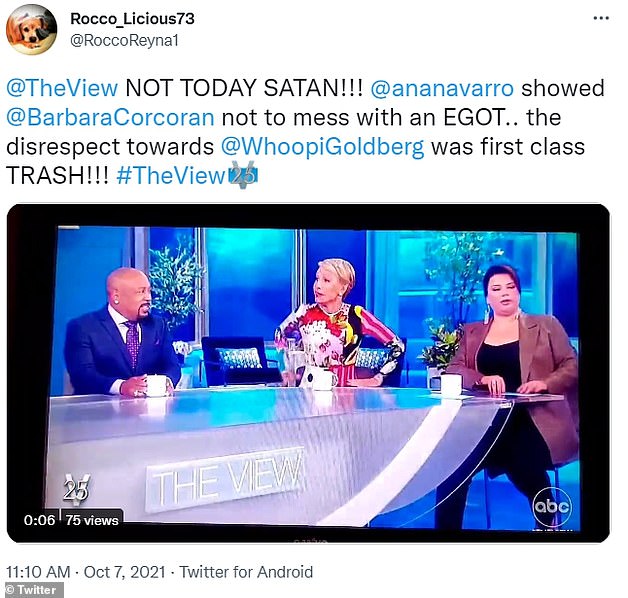 ‘NOT TODAY SATAN!!!,’ @RoccoReyna1 wrote. ‘@ananavarro showed @BarbaraCorcoran not to mess with an EGOT.. the disrespect towards @WhoopiGoldberg was first class TRASH!!!’

Whoopi addressed her own issues with weight earlier this year when she said ‘I too am Valerie Bertinelli’ after the soap star appeared on the show to talk about her fluctuating figure. ‘I have the same issues,’ she shared.

Co-host Joy Behar added: ‘I did a thing for Jenny Craig years ago, and I lost 30 pounds. I put 15 back over the years so I would like to just say that right up front. I don’t think that you have to be going through something to gain weight. I’m not going through anything. I’m gaining weight.’

Behar went on: ‘Stop watching women. Stop watching what women look like, stop it already. I feel for poor Valerie having to endure this in public, it’s sad.’

In 2014, Whoopi’s weight was once again a discussion as she admitted to topping the scale at 217 pounds and needing a change.

She credited former co-host Sherri Shepherd with giving her motivation to lose the weight as she discussed season 18 during an interview for ABC News.

When asked how much weight she had lost, Whoopi said: ‘About 35 pounds. I happened to notice that I had begun to look like a linebacker. I happened to look over and there was Sherri, skinny, and I said, “What did you do?” She said, “I’ve been doing Rocco DiSpirito’s one pound a day diet.” I said, “Please, I want to do it too.”‘

Whoopi joked that having a ‘month off’ from work also helped aid in her transformation at the time.

In 2016, Goldberg joked about the annoying trend of holiday weight gain before panelist Jedidiah Bila noted that big butts were in style.