Baywatch vet Donna D’Errico, 54, poses in lingerie after revealing she is lonely: ‘It’s a heart numbing thing when so many men desire you but none love you’

In the snapshot, the blonde beauty from Baywatch was seen again in a provocative pose. This time, the 54-year-old ex of Motley Crue co-founder Nikki Sixx had on lacy black lingerie as she sizzled in her bedroom with opened suitcases behind her.

This post comes just after she shared that she is lonely in Los Angeles as has not been able to find a man who loves her for who she is. 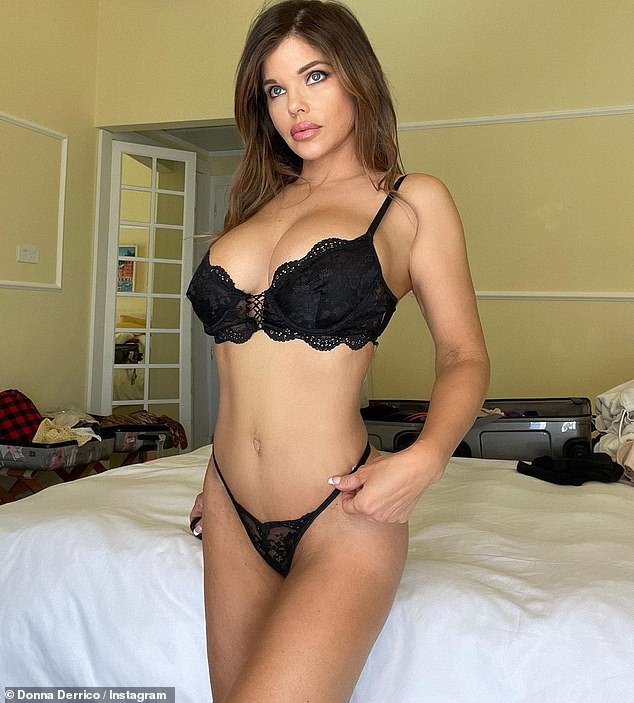 Looking great: Former Playboy model Donna D’Errico shared a smoldering pinup photo to Instagram on Monday. The Baywatch vet had on lacy black lingerie as she sizzled in her bedroom with opened suitcases behind her

Her caption did not reference the bullying she received earlier this year when she was told she was too old to pose in skimpy lingerie or swimsuits.

Rather, she reminded her followers that she is hot stuff.

‘Alexa, play “Girl on Fire” by Alicia Keys,’ wrote the TV and movie star in her caption for her 1.1 million followers.

This weekend the star shared a flashback photo as she discussed being admire but not loved.

‘I am no angel. I’ve done some questionable things. Some with full knowledge of what I was doing and wish I could forget. Some when I wasn’t in my right mind and don’t care to remember,’ she began her story.

‘LA is a very lonely city filled with beautiful lonely temporary people and I’m a human being just like everyone else,’ added the Candyman: Day Of The Dead star.

She then wrote that she wants to love and to be loved.

‘And sometimes the company of a beautiful man can feel like a sort of love, can’t it?” she asked.

She then noted that for a fleeting moment she absorbs it.

‘Then it’s gone and I remind myself that everything in this town is make believe,’ wrote the Alabama native.

‘I live in a state of abundance when it comes to men, so I’m never without a date if I don’t want to be. But I mostly prefer to be alone.

‘It’s a heart numbing thing when so many men desire you but none love you.

‘I realize that deliberate use of sex appeal makes it difficult for people to appreciate other things about you. I make my peace with it.’

Donna then wrote that she thinks think all our decisions in life, both good and bad, shape us into who we are today. 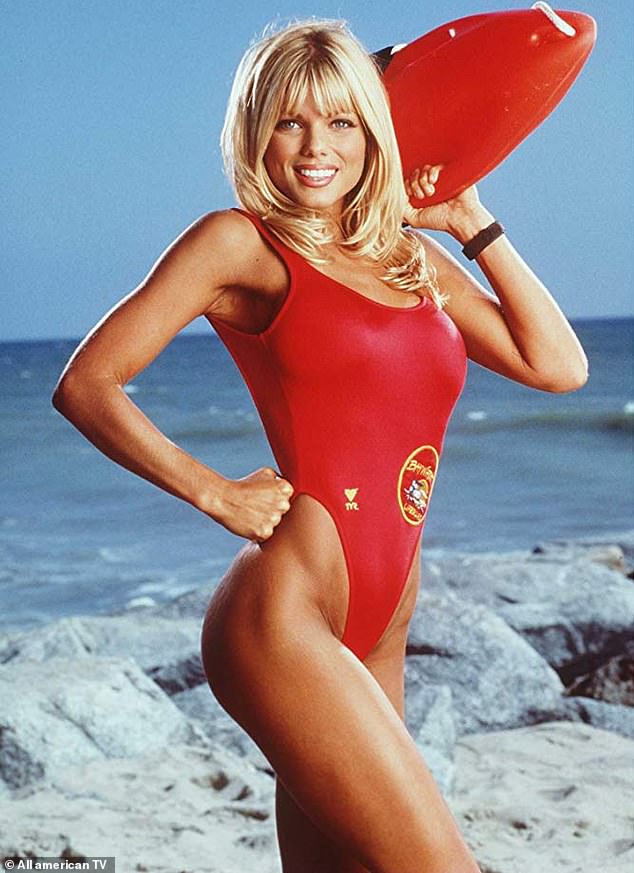 Her big TV show: The blonde bombshell who was on Baywatch and Baywatch Night from 1996 until 1998

‘I do my best to be good. I live with integrity. I make my actions match my words. If I say I’m going to do something, I do it. I wouldn’t dream of intentionally hurting anyone. Human emotions are delicate.

‘I may not always be the smartest one in the room, in fact I very often feel quite stupid, but I always maintain a sense of inner dignity and character and manners and respect no matter what is happening around me. My insecurities are many, I have a temper, and I make mistakes, but I am kind. I think that’s the best I can do.’

The bombshell was told in June by haters that she was ‘too old’ to share pinup snaps.

‘I feel sexy as hell,’ said the icon in response soon after.

She was posing in lingerie. And Donna wanted her fans to know, ‘Men are complimenting me and I’m eating it up. Let me live. When I’m 80 I’m going to look back and be so happy I did this while I was hot. ❤️’ 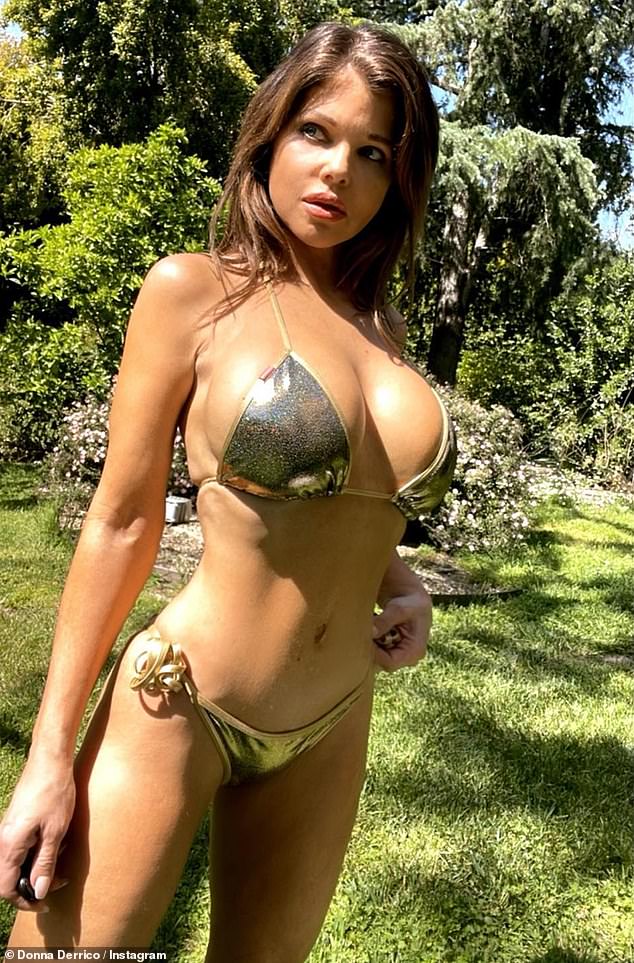 Hot stuff: D’Errico has been told that she is too old to model bikinis but she opts to ignore the haters

She also claimed that Instagram has been censoring her.

‘So IG removed my other post because too many Karens were complaining about it saying my caption was indicating that I was soliciting prostitution,’ she began her note.

In her note she said that the sexy images shared on Instagram are a lot like what is seen on the pay site Only Fans. And she added that women who pose in skimpy clothes for Instagram are applauded but if they do it for Only Fans, their careers are over.

Along with her caption she could be seen in pink lingerie.

She said she was ‘trying not to laugh’ about the controversy. ‘I’m trying again with a new photo showing something the Karens may kiss. Below is the caption I had with my original post. If this one gets deleted, I really don’t know what to say.’

She also said she loves wearing sexy lingerie. ‘I don’t have a man to wear it for though and I can’t exactly sit around my house alone randomly wearing it,’ shared the star. 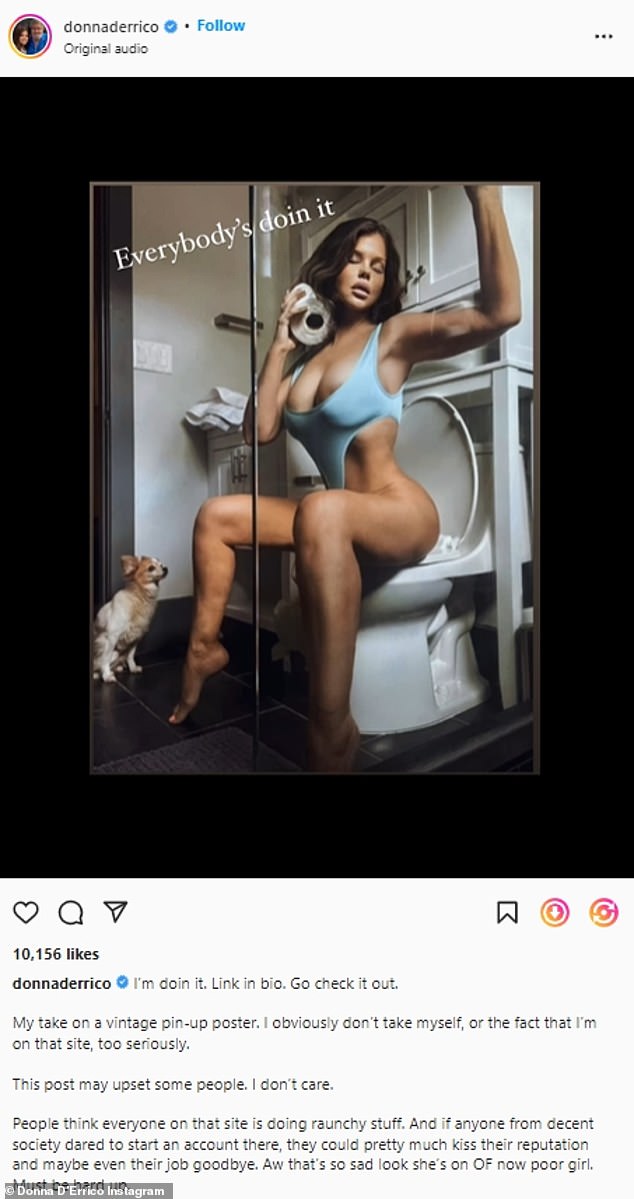 Only Fans talk: She shocked fans in this monokini as she sat on a toilet. In her caption she talked about Only Fans saying, ‘People think everyone on that site is doing raunchy stuff’ but most women are not

The comment was a reaction to the hate she received on 4th of July when she was seen in a bathing suit during a video shared to social media, she explained.

‘Quite a few women complained about the 4th of July video I posted in a red white & blue bikini because they thought I was “classier than that” and “too old to wear a bikini” and, my favorite, “desperate,”‘ shared the bombshell.

‘Let me tell you something that might surprise you. I can actually wear and do literally whatever I want. On that note, here is me in a bikini squatting on a coffee table ❤️.’

Hitting back: The fitness expert posted a sexy bikini photo to Instagram in mid July as the acting veteran told her followers that she is not too old to post these types of sexy snaps

She added a second note as well.

‘For all those asking, no I didn’t remove the red white & blue 4th of July video. It’s still up under the “reels” tab on my page,’ she shared.

In the clip she is seen in a red, white and blue bikini as she played God Bless USA.

‘Happy 4th of July everyone! US,’ read her caption as she wished her fans well in the clip while pulling at her bikini bottoms.

The comments seemed to be only flattering with fans saying she was ‘beautiful’ and  ‘stunning.’ 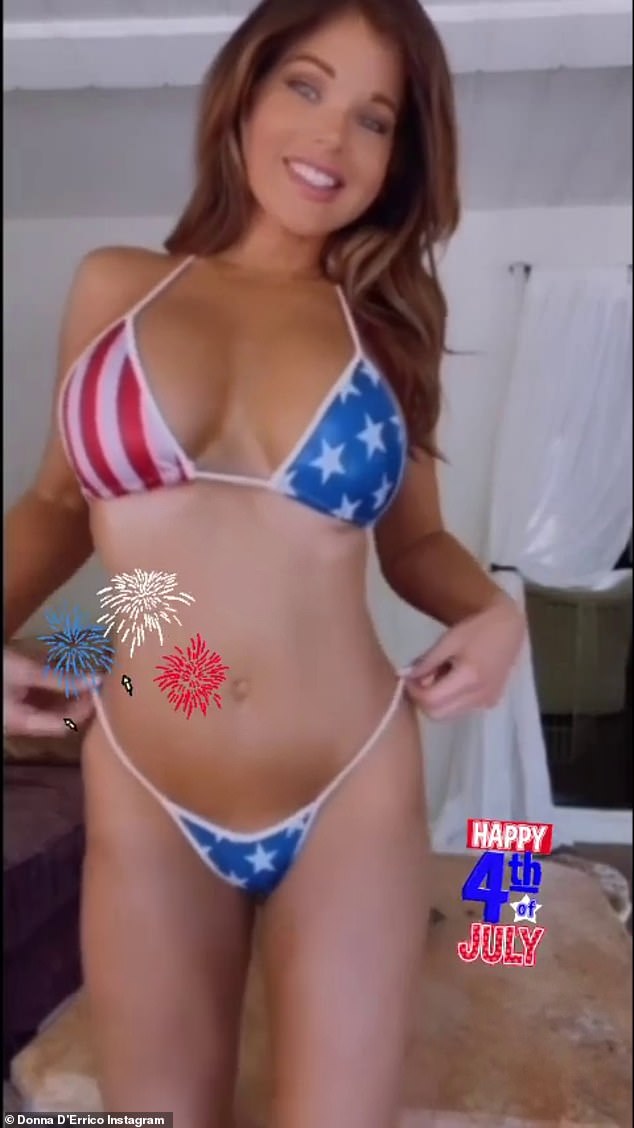 The 4th: In the clip she is seen in a red, white and blue bikini as she played God Bless USA. ‘Happy 4th of July everyone! US,’ read her caption as she wished her fans well in the clip while pulling at her bikini bottoms