Bethenny Frankel, 50, dons plunging swimsuit in summery new snap… as she pokes fun at scathing tweet from a former colleague: ‘What a beach…’

Bethenny Frankel looked ready for summer in a new Instagram snap she shared on Thursday.

The former Real Housewives of New York star modeled a red floral swimsuit with large cut-out on the chest to reveal her cleavage.

In her caption, the 50-year-old gave a tongue-in-cheek reference to former colleague Jessica Kirson’s scathing tweet aimed at Bethenny earlier this month which called the Skinnygirl founder a ‘total b***h’.

‘What a beach…’: Bethenny Frankel shared sexy swimsuit snap on Thursday and also made a cheeky reference to one of her critics’ scathing tweets earlier this month 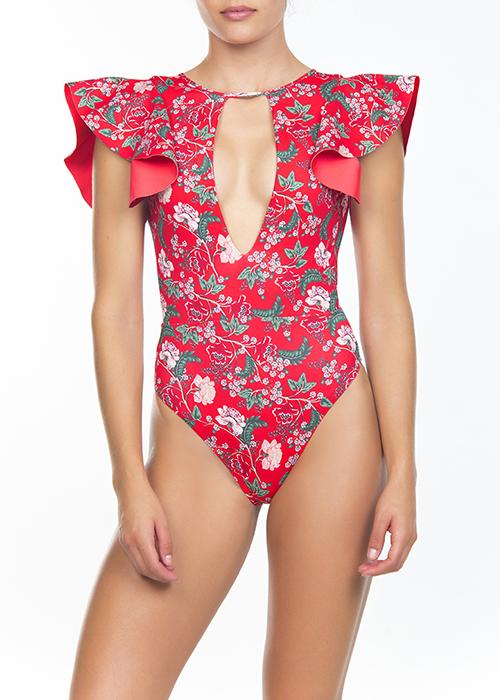 ‘What a beach…’ the mother-of-one wrote along with a beach emoji and a plug for her new sunglasses brand Bethenny Eyewear.

The TV personality finished her look with a gold padlock necklace, a straw fedora and a pair of sunglasses from her line.

Jessica spoke out on Twitter on March 7, recalling her unpleasant stint as a warm-up act for the former Real Housewives star, in response to Bethenny’s scathing attack on Meghan Markle.

‘I was the warm up comic on your failed morning talk show and you were a total b***h to me.’ Jessica, who is Zach Braff’s step-sister, wrote.

‘For months you never said hello and you ordered me around like a dog. One day I walked off set because I had enough of your s***. Have a great day!’ the New York-based stand-up comedian added. 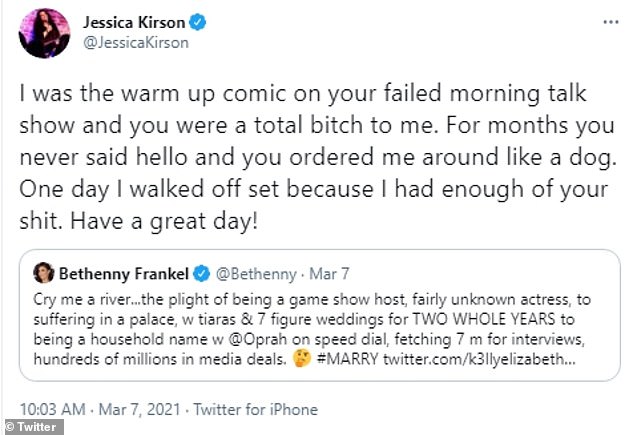 ‘Total b***h’: Jessica Kirson – who once worked with Frankel – recalled her unpleasant experience with the former Real Housewives star during her stint as a warm-up act on Frankel’s talk show 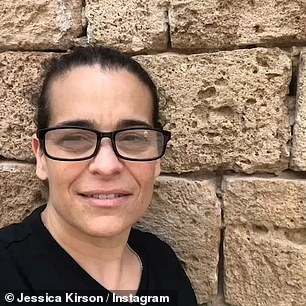 Jessica spoke out on Twitter on March 7. She is a comedian and Zach Braff’s step-sister

Jessica’s tweet came in response to Bethenny’s post about the Duchess of Sussex which poked fun at her privilege and criticized the former actress for not being able to handle ‘two years’ of being part of the British institution.

‘Cry me a river… the plight of being a game show host, fairly unknown actress, to suffering in a palace, w tiaras & 7 figure weddings for TWO WHOLE YEARS to being a household name w @Oprah on speed dial, fetching 7 m for interviews, hundreds of millions in media deals. #MARRY’ the reality star wrote on Twitter just hours ahead of Meghan and Harry’s explosive sit down with Oprah on March 7.

‘Cry me a river’: Kirson chimed in after Frankel’s post about the Duchess of Sussex, poking fun at her privilege and criticizing the former actress for not being able to handle ‘two years’ of being a princess 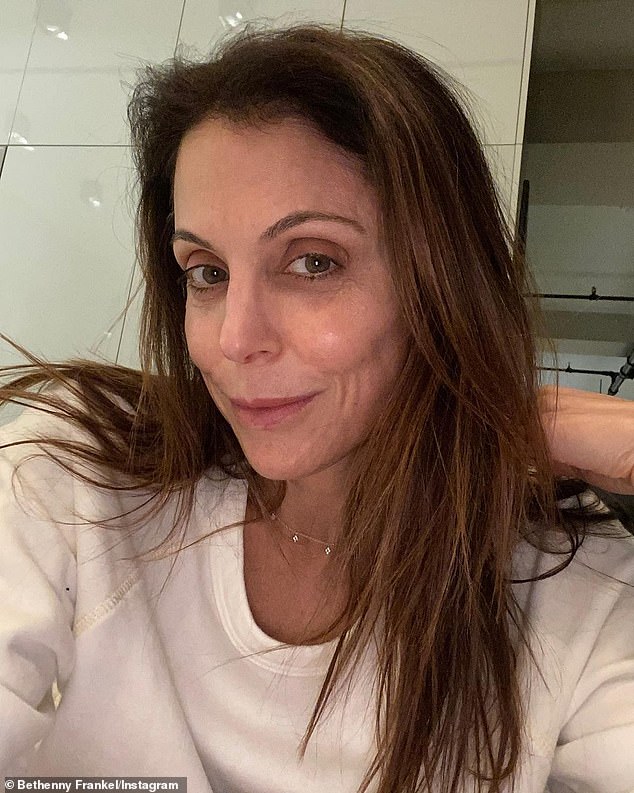 The Bravo star later apologized for her remarks after she watched the Oprah interview which aired on CBS on March 7, writing: ‘I’m a polarizing, unfiltered(often to a fault)flawed person w a voice.’

Bethenny later apologized for her remarks after she watched the Oprah interview.

‘I watched M & H sit down. Emotional distress & racism must feel suffocating & powerless. I’m a polarizing, unfiltered(often to a fault)flawed person w a voice. When I heard of the interview,during a pandemic, it felt like a surprising choice. I’m sorry if it hurt or offended you. (sic)’

During the interview on CBS, the Duchess admitted to having suicidal thoughts after joining the royal family.

She also accused an unnamed member of the royal family of asking about her son’s skin color prior to his birth.

The former Suits actress – who is biracial – claimed the royal family brought up the subject with her husband, Prince Harry, when she was pregnant with their first child, who is now 22 months old, and suggested the baby’s heritage was one of the reasons why the tot wasn’t given a title. 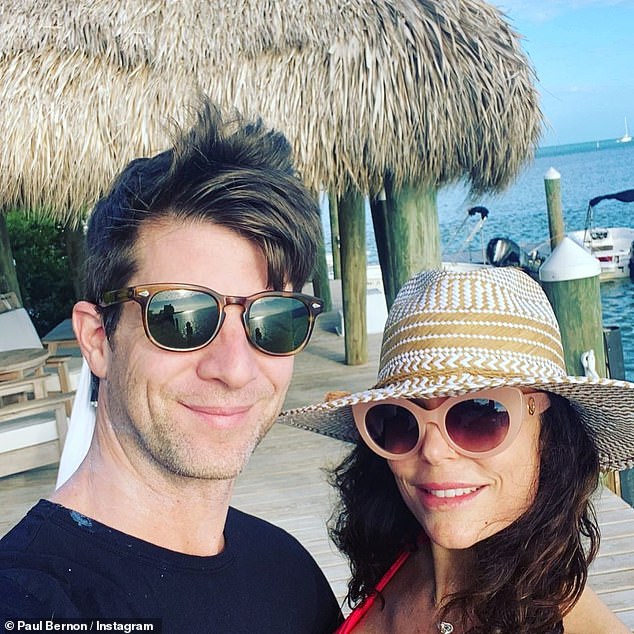 Giving it another shot: Meanwhile, Bethenny rekindled her romance with Paul Bernon