Cardi B is shutting down Offset cheating rumors in the most NSFW way possible!

It all began over the weekend with a Twitter user posting a meme from Spongebob SquarePants in which the title character is looking down at a phone with lustful eyes, captioned, “Man eat that d**k.” The Twitter user who caught Cardi’s attention quote tweeted the photo, adding:

“This is how @OffsetYRN be w/random women when @iamcardib be away from home.”

See the full thing (below):

Oooooh, low blow! Bet he wasn’t expecting the WAP rapper to actually see what he wrote, but she sure did, and she came prepared with a pic of her own! Yes, in her attempt to showcase Offset’s loyalty, she replied in a since-deleted tweet with a screenshot of her and her husband’s NSFW messages, in which they detail their sex life. In the messages, Cardi has the Migos alum named “Hubbington,” who texts her:

See the screenshot (below): 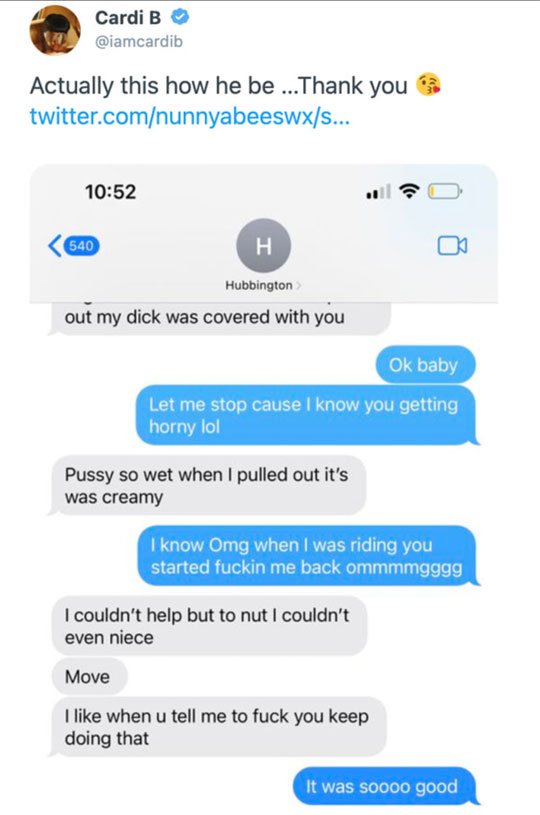 Okayyyyy, yeah, that’s probably something we all could have gone our entire lives without reading, but point taken, Cardi. You and your man are attracted to one another — to put it softly.

This all comes just days after the I Like It Like That artist tweeted out steamy pics of her and her hubby, which she captioned:

Damn, Cardi! We definitely see what you mean! And couple days after that post, she tweeted about her baby daddy again, this time gushing:

“I remember the first time Set told me he loved me…….I called all my 15 friends right after”

Many fans have been speculating Cardi’s recent public displays of affection are in response to a rumor started by another Twitter troll last month that Offset actually was indeed unfaithful, but with fellow female rapper Saweetie, who previously dated his Migo’s groupmate Quavo. Messy messy! The Bodak Yellow songstress was quick to shut it down, though, writing:

“You makin crazy lies starting shit and putting female rappers in it WIT NO RECEIPTS,no blog ever spoke on this all of a sudden you come out of jail 5 days ago and you made up for lied in 2 hours wit NO RECEIPTS!”

Whew! That’s a lot of drama for Cardi to navigate! How successful do you think she is at it? Let us know in the comments (below), and let’s just PRAY we never have to see a text convo between her and Offset again, LOLz!