And now it can be revealed that comedian Eddie Izzard is to assume the cape of fiction’s most revered detective.

Izzard, 60, became famous as a comedian who cross-dressed, but now identifies as a gender-fluid trans woman. She announced two years ago that she would prefer female pronouns and intends to be ‘based in girl mode from now on’.

Last month, she launched a campaign to be Labour’s candidate in Sheffield.

But in the meantime, she is in advanced talks to join the cast of big budget drama series Sherlock’s Daughter. It is not clear whether her Sherlock will be played as a trans woman or as a man. 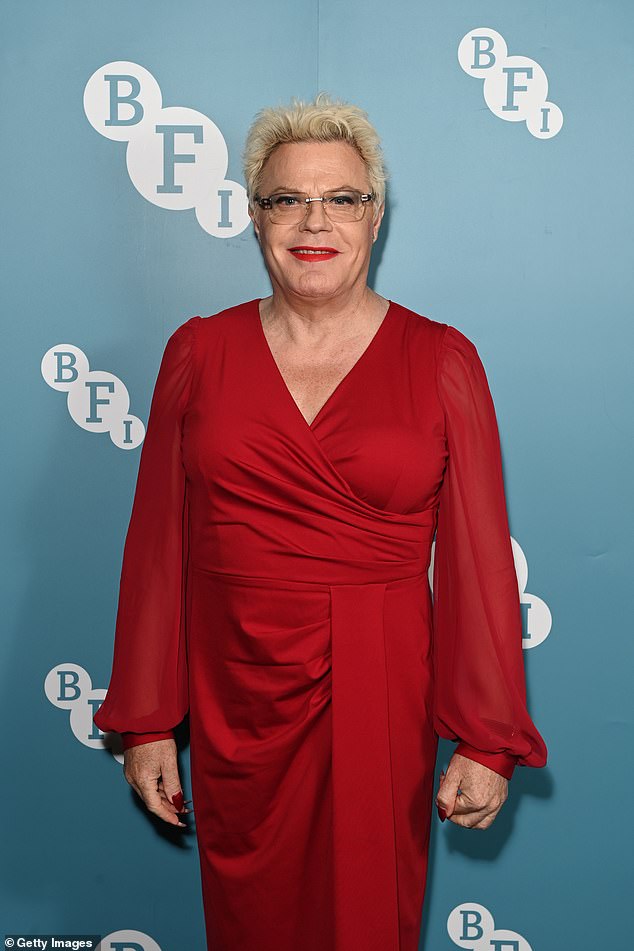 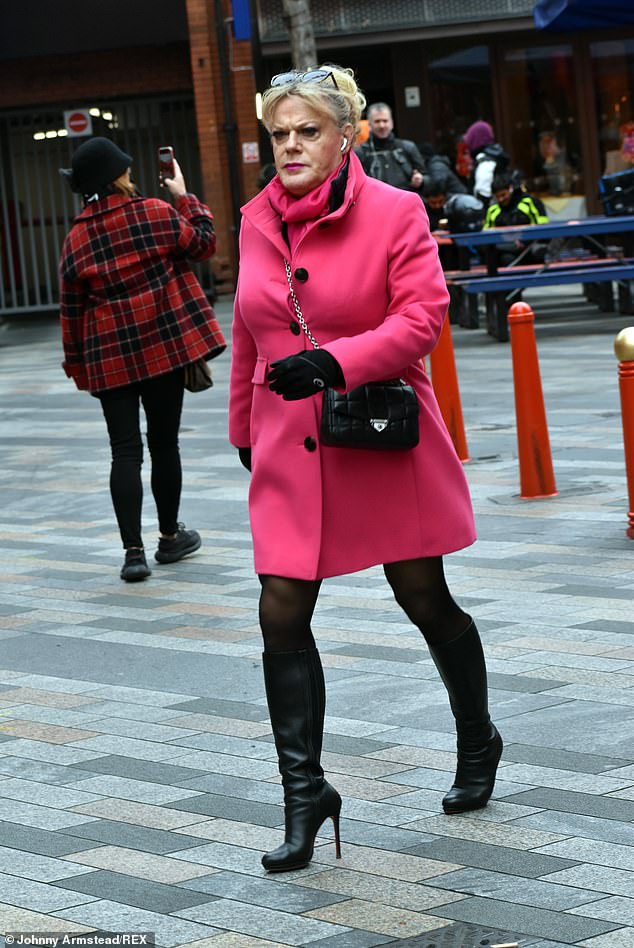 Izzard, 60, became famous as a comedian who cross-dressed, but now identifies as a gender-fluid trans woman

The show, made by Starlings Entertainment, has been written by Brendan Foley and tells the story of Amelia, a young American woman who travels to London to track down her biological father after the murder of her mother.

A synopsis of the project explains: ‘She journeys to England to find him, but he’s not what she expected. Holmes is stymied, unable to investigate a sinister case without risking the lives of his closest friends, but Amelia is determined to prove she has inherited his powers of deduction and that two Holmes are better than one.

‘Holmes sees a chance both to test her claim and use her as his proxy. He sets her a challenge: Sherlock’s daughter? Prove it. Crack this case.’

Sherlock Holmes was most recently brought to the screen in Netflix’s Enola Holmes films, starring Millie Bobby Brown in the title role, and featuring Superman actor Henry Cavill as an extremely hench Holmes.

Those adaptations followed a lawsuit brought by the estate of author Sir Arthur Conan Doyle. The estate sued Netflix — and Enola Holmes author Nancy Springer — over a violation of copyright, but the matter was settled out of court in late 2020.

The entire Holmes canon will be out of copyright in 2023, which is when Sherlock’s Daughter is expected to film. 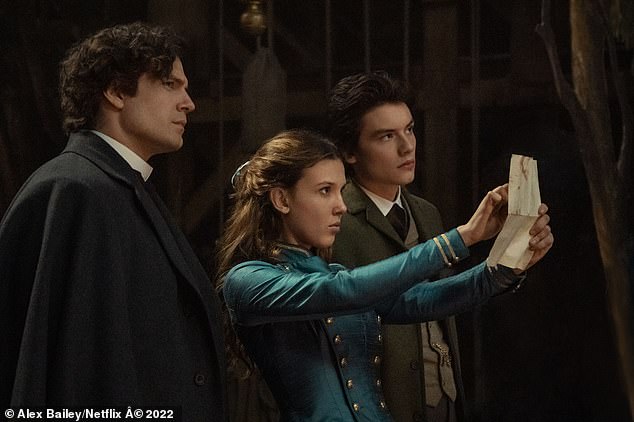 Brace yourself for bad behaviour on screen in Babylon, a 188-minute epic from La La Land director Damien Chazelle. Some friends who have seen it are not fans of the period comedy, which tells the story of Hollywood as movies transition from silent pictures to talkies.

Margot Robbie plays actress Nellie La Roy — loosely based on wild child Clara Bow (aka ‘The It Girl’) — and Brad Pitt is actor and director Jack Conrad. It’s totally over the top, with Robbie fighting a rattlesnake and projectile vomiting (thankfully not simultaneously). 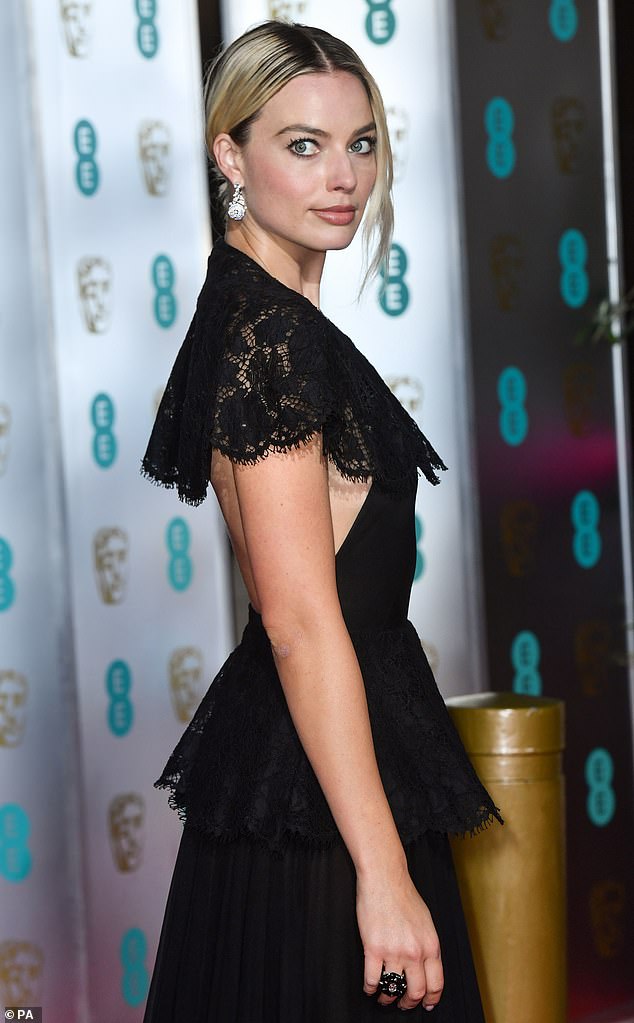 Actress Jean Smart (of Hacks) plays a gossip columnist who is also present at the party. She said: ‘That first tracking shot … with the chicken high on cocaine …went on for ever, with about 37 insane things happening, like people snorting coke off naked bodies. I remember thinking: ‘Thank God we have some really uninhibited extras in Los Angeles.’

She joked that she told herself: ‘Just don’t look down, and don’t back up.’

Robbie, in London this week to promote the film, said she didn’t think she was anything like Nellie — who rockets to fame but ends up overwhelmed by gambling debts and drugs — ‘but then I have friends who’ve seen the movie and they go: ‘That’s totally you!’ ‘ When asked if making the film made her nostalgic for old Hollywood, she said: ‘I think there’s way less drugs now.’ Co-star Pitt chimed in: ‘Sadly, true.’

Director Chazelle said: ‘Towards the end of the 1920s there was this sort of rash of suicides, deaths, drug overdoses and I found it coincided with the transition from silent to sound. I started looking at the kind of extreme living — the passion, ambition and recklessness of all stripes — that characterised Hollywood at that time, and it got my brain going.’

The film will be released in America on December 23, and in the UK in January.

A little extra flair for Fleur

Did Fleur East (below) have a secret weapon for the Couple’s Choice dance on Strictly last Saturday, which gained her a perfect 40 score — the first of the series?

It can be revealed that her amazing routine, performed to a Destiny’s Child medley, was choreographed by Beth Honan, a commercial choreographer who has worked with Girls Aloud, Little Mix, One Direction, the X Factor live TV shows — and Fleur, in her pre-Strictly days. 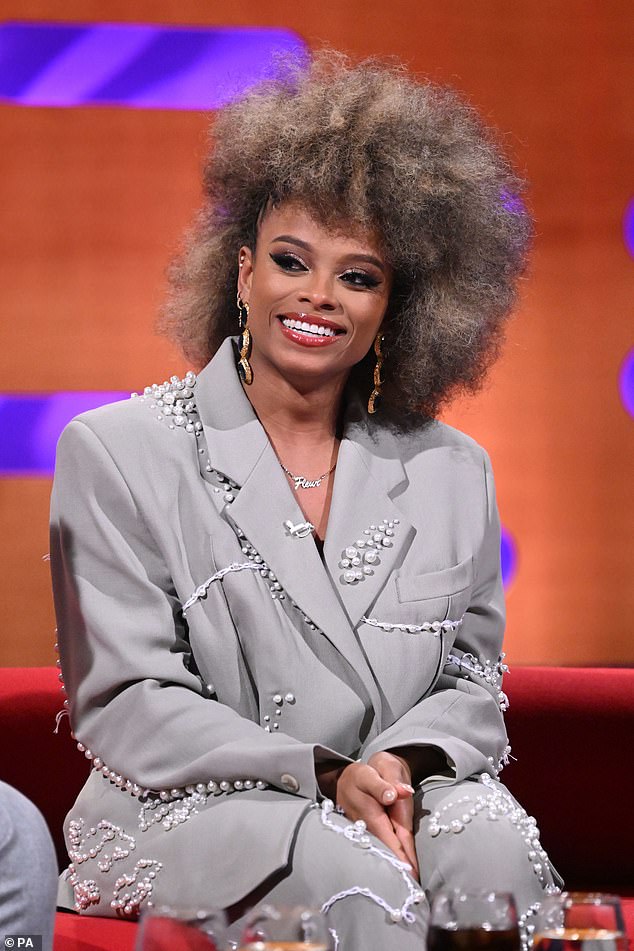 Fleur East’s amazing routine on Strictly, performed to a Destiny’s Child medley, was choreographed by Beth Honan, a commercial choreographer who has worked with Girls Aloud, Little Mix, One Direction

Ms Honan is credited as one of a team of ‘additional choreographers’, and a BBC spokesperson confirms she was indeed the creative force behind the dance. I’m told: ‘Beth has worked on the show for a number of years and choreographed many pro numbers and Couple’s Choice dances, including Fleur and Vito’s last weekend.’

Honan choreographed AJ Odudu and Kai Widdrington’s Couple’s Choice dance last year — which also got a perfect 40 — as well as Faye Tozer and Giovanni Pernice’s routine in 2018, which earned a mere 39 points.

Clive Myrie is very much the BBC’s rising star. The newsreader took over the reins on Mastermind from John Humphrys last August and has now been chosen to front another ‘factual entertainment’ programme — this time a travel show in Italy. Clive Myrie’s Italian Roadtrip is currently filming and will go out on BBC2 in due course. He’s long been a fan of the country and regularly travels there to see opera.

Myrie fronted the BBC’s News At 10 in the Ukrainian capital Kyiv on the day Russia invaded, and viewers saw a tear roll down his cheek during the broadcast. A passionate jazz fan, he has hosted a number of jazz shows for radio and the BBC Proms. 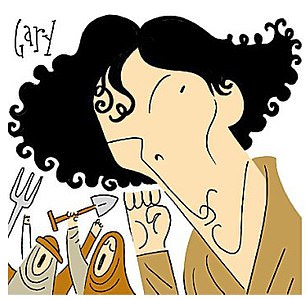 Benedict Cumberbatch will star in The Hood for director Paul Greengrass. The Revolt was led in 1381 by revolutionary Wat Tyler

Wat’s it all about for revolting Benedict?

He gets terribly cross about people constantly bringing up his privileged upbringing (Harrow, since you ask), so let’s make no comment about the casting of Benedict Cumberbatch as one of the leaders of the Peasants’ Revolt. The 46-year-old actor will star in The Hood for director Paul Greengrass. The Revolt was led in 1381 by revolutionary Wat Tyler, who ended up with his head on a spike. Cumberbatch has been a busy bee recently. He has just finished shooting a new TV mini-series of John Buchan’s classic novel The 39 Steps, and a film adaptation of Roald Dahl’s The Wonderful Story Of Henry Sugar (he plays the title character). Both will be out on Netflix next year.

Some of the biggest names in British film stand accused of being involved in ‘art-washing’ after agreeing to take part in a film festival in Saudi Arabia next week.

The regime has reportedly carried out 12 beheadings in recent weeks, and it is widely accepted that government agents murdered journalist Jamal Khashoggi in the Saudi consulate in Istanbul in 2018.

Next Thursday, director Guy Ritchie will receive an ‘honorary award to recognise his exceptional contribution to the film industry’ at the Red Sea International Film Festival in Jeddah. He will also give a talk about his career at the event, which is run by the country’s culture minister.

Ritchie’s agent at WME did not respond to requests for comment, nor did his lawyer Matthew Saver.

It is not known whether the director was paid a fee for attending, but industry sources say that it would be standard for attendees to receive one, as well as free travel and accommodation.

There is further British involvement, with two UK films — Sam Mendes’s Empire Of Light, starring Olivia Colman, and Shekhar Kapur’s What’s Love Got To Do With It, with Lily James and Dame Emma Thompson — being screened at the event.

The latter, a romcom scripted by Jemima Khan, will be the opening night premiere. It was made by British film company Working Title, whose co-chairs — Tim Bevan and Eric Fellner — are both CBEs.

Khan is planning to attend, but says she agonised over the decision. ‘I have always been and continue to be critical of the Saudi government’s human rights abuses. But I have learned from my years in Pakistan that, while shunning people rarely brings change, engaging through art and culture sometimes can.

‘I thought about this a lot, and I feel that, on balance, there is value in screening a film about multiculturalism and tolerance, featuring strong, independent women, in a country where just five years ago, cinema-going was illegal and women weren’t allowed to drive, nor go out in public without a male ‘guardian’, let alone make films.’

A spokesman for Thompson, who has been a great advocate for human rights and supported organisations including Amnesty International, said this week she would not be attending. She is understood to be on a press tour to promote the film Matilda. 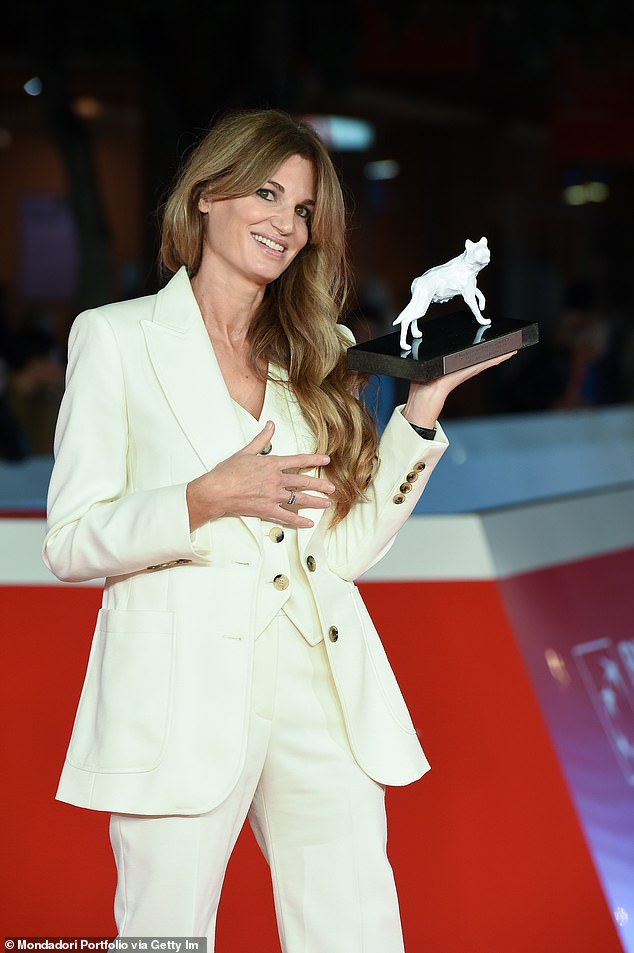 The latter, a romcom scripted by Jemima Khan, will be the opening night premiere of a film festival in Saudi Arabia next week

Agents for Lily James did not return requests for comment. The music producer Naughty Boy, who also worked on the picture, confirmed on Monday that he will be going, and said: ‘I am looking forward to it.’

What’s Love Got To Do With It will have been entered in the Festival by distributor Studio Canal. Nobody at the company was willing to comment this week.

Of course, film is not the only UK industry to have links with the Saudis, but a spokesman for Human Rights Watch urged celebrities to limit their involvement, or at least speak out about human rights abuses while there.

‘Saudi authorities often use international cultural festivals as a reputation laundering tool, in the same way that they have used previous celebrity and sporting events to try to whitewash their quite terrible image,’ the representative of the New York based organisation said recently.

We do not take a position on boycott, but we would urge people to educate themselves as much as they can about what is going on, and ask them to use their platform to speak out about abuses.’

Peter Frankental, Amnesty International UK’s Economic Affairs Programme Director, took a similar line: ‘Whether actors and directors go to Jeddah is a matter for them, but we’d strongly urge attendees to use their platforms to raise human rights issues.

‘Earlier this year, the Saudi authorities executed 81 people in a single day, there are juvenile offenders currently on death row, and we’ve seen Twitter users like Leeds student Salma al-Shehab given huge jail sentences; and there’s never been proper accountability for the shocking murder of Jamal Khashoggi.’

Spare a thought for the I’m A Celebrity stars — after surviving trials and indignity, they will then have to contend with the Australian taxman. It turns out that they are liable for 42 per cent tax on their whopper earnings, and will then have to pay a nominal amount to the UK taxman as well.

Helen George (pictured) is stepping into Deborah Kerr’s ballet pumps to play Anna Leonowens in a UK tour of the beloved Rodgers & Hammerstein musical The King And I, which features classics like Getting To Know You and Hello Young Lovers. Ms George, who shot to fame as glamorous Trixie Franklin in Call The Midwife, will play the British schoolteacher who is hired by the King of Siam to educate his many wives and children. Kerr famously took the role in a big screen version opposite Yul Brynner in 1956. In 2018, a production of the musical directed by Tony award-winner Bartlett Sher enjoyed a sold-out season at the London Palladium. The touring version, with George as Anna, will visit Dartford, Cardiff, Birmingham and other locations.

She said: ‘Theatre is my first love, and I am so excited to be returning to the stage for this beautiful, majestic production of The King And I.’ 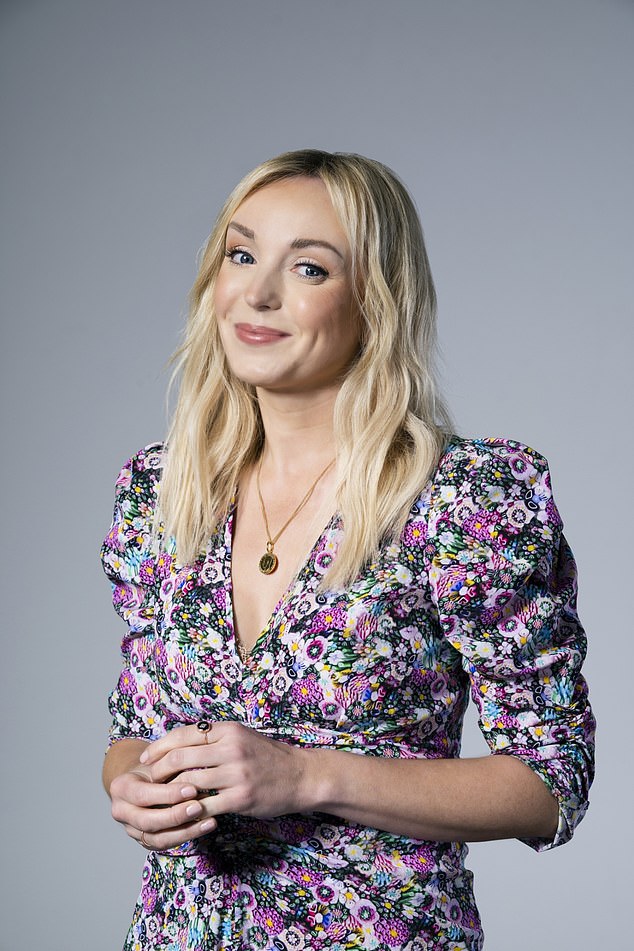