EDEN CONFIDENTIAL: Carrie on decorating! Workmen are in Downing Street

EDEN CONFIDENTIAL: It’s Carrie on decorating! Workmen are in Downing Street again as ground floor is given plush makeover

Now, I can disclose that the ground floor has been given a plush makeover as well — at the taxpayers’ expense.

Carrie is said to have described the flat they inherited from Theresa May as a ‘John Lewis furniture nightmare’ and their overhaul upstairs featured custom-made furniture and gold wallpaper by her friend Lulu Lytle.

The improvements left downstairs, where the staff and politicians beaver away, looking very shabby by comparison. So over the summer, I hear, there have been extensive renovations including an elegant cream paint scheme, brand new deep, fluffy red carpets, and modern artworks hung on the walls. 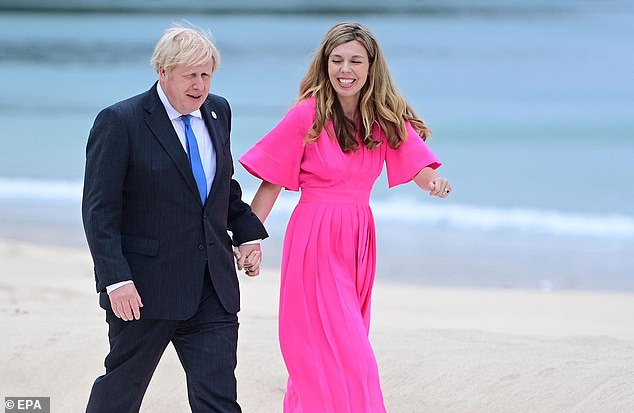 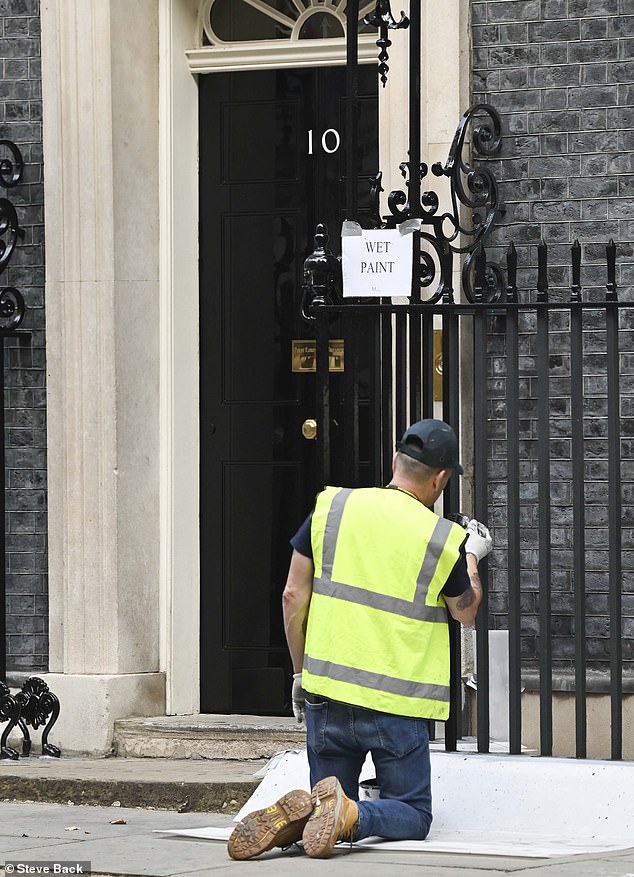 Even the outside of Downing Street has been given a lick of paint, with No 10’s front door getting a shiny new look

Carpet is removed from No10 Downing Street on 17 August

‘It’s been given a proper upgrade,’ says my Westminster mole. ‘It didn’t make sense to have the downstairs looking like the poor relation to the upstairs flat.’

Even the outside of Downing Street has been given a lick of paint, with No 10’s front door getting a shiny new look.

A staffer admits the works have been ‘very disruptive’ but, luckily for the Johnsons, they took place while the couple enjoyed time away at Chequers in Buckinghamshire, the West Country and, as I revealed last week, Balmoral with the Queen.

Chancellor Rishi Sunak, who lives above the property next door and has been working hard on the new plan for social care, has not been so fortunate: there has been plenty of scaffolding, and workmen coming and going for weeks.

Just how much taxpayers’ money was spent will be released in the Cabinet Office’s annual report, a spokesman says. Downing Street was forced to reveal the source of the funds for the upstairs refurbishment last year, after a string of exclusive stories in this newspaper. Taxpayers paid £28,600 for the Lulu Lytle wallpaper and furnishings, and this was topped up with a £52,802 ‘bridging loan’ from Conservative Party funds.

This was paid off with a loan from Tory donor Lord Brownlow, but the party later announced that the costs had been ‘personally settled’ by Boris himself.

If you’re paying £195 for dinner, with drinks and a 15 per cent service charge NOT included, would you expect to know what you’ll be served? Well, Gordon Ramsay doesn’t think so.

At Restaurant Gordon Ramsay in Chelsea, the chef has introduced a ‘Carte Blanche’ menu — a blank sheet of paper. Diners won’t know what they’re eating until they tuck in. Head chef Matt Abe explains: ‘It’s great as it lets me be a lot more free in the kitchen.’

The MasterChef star adds that ‘surprise’ dishes ‘allow guests to go on a journey’. Hopefully that journey won’t be down the road to a restaurant where they know what they’ll eat.

Dandyish TV presenter Michael Portillo might be known for his garish suits, but the former Cabinet minister’s wife, Carolyn, is just as colourful.

Asked at the launch party for Venetia Welby’s novel, Dreamtime, what she had been doing in lockdown, she said: ‘What do you think? Enjoying myself, having lots of illegal parties.’

Hollywood star Sienna Miller has proof that her dashing new boyfriend, Archie Keswick, is prepared to pay the price of love — however high.

I hear that Keswick — a scion of the Jardine Matheson dynasty which owns the Mandarin Oriental Hotel Group — bid furiously at a theatre charity fundraising auction at Kensington Palace Gardens, where the prize was ‘lunch with Sienna Miller’.

‘It was amazing,’ auctioneer Lord Dalmeny tells me. ‘The auction took place after dark, so it was quite hard to see everyone at first. But then, out of the darkness, came all of the generous people in the theatre.’ 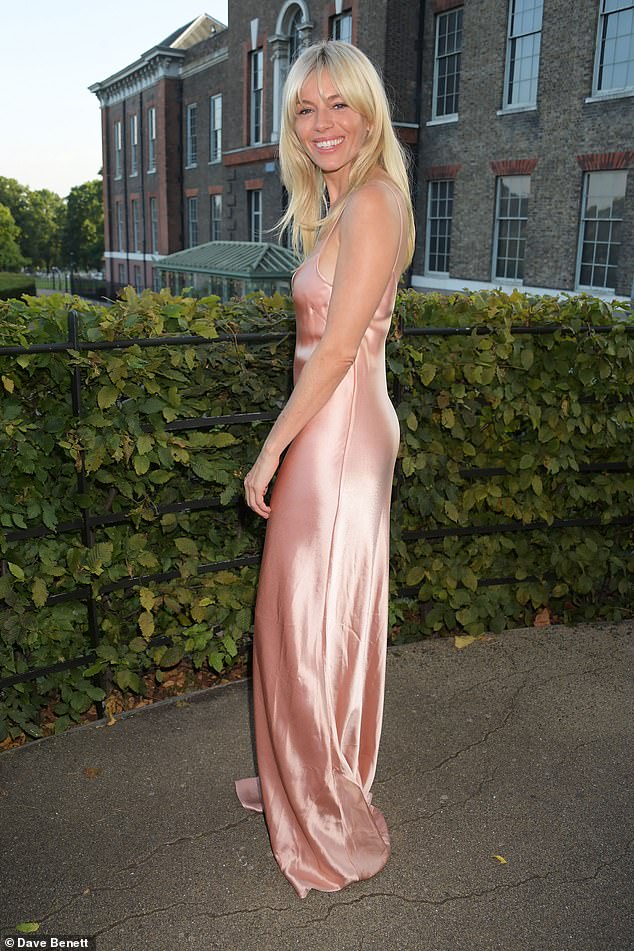 I hear that Archie Keswick — a scion of the Jardine Matheson dynasty which owns the Mandarin Oriental Hotel Group — bid furiously at a theatre charity fundraising auction at Kensington Palace Gardens, where the prize was ‘lunch with Sienna Miller’ 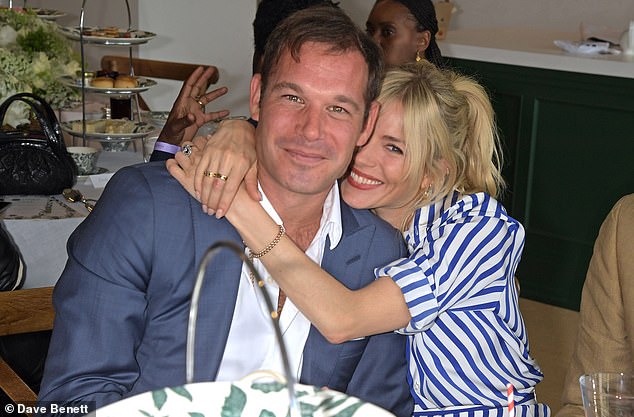 Hollywood star Sienna Miller has proof that her dashing new boyfriend, Archie Keswick, is prepared to pay the price of love — however high.

Old Etonian Keswick, 41, whose long friendship with the 39-year-old actress turned into a passionate romance this summer, was determined not to be outbid.

Harry Dalmeny’s hammer came down on a staggering £10,000. ‘Archie Keswick bought lunch with Sienna, which was quite fun,’ the Sotheby’s chairman confirms. ‘I was so happy to help — theatre in Britain is one of our greatest pleasures.’

Among the other guests at the Ambassador Theatre Group’s party in support of the Theatre Artists Fund were Oscar winners Sam Mendes, Eddie Redmayne and Sir Tom Stoppard.

Enfield, 60, who plays Prince Charles in Channel 4 comedy The Windsors, says: ‘I was just about to go on and someone said, “Your Royal Highness Prince Edward is about to come in, and you’ve got to stand up and call him Sir”.

Princess Michael of Kent has been in the wars, suffering a nasty bout of Covid followed by blood clots, so it was good to see her hosting a party for about 200 in the gardens of Kensington Palace on Monday.

‘Marie-Christine was in good spirits, but needed a stick to help her get around,’ a guest tells me of the Princess, who’s married to the Queen’s cousin, Prince Michael. 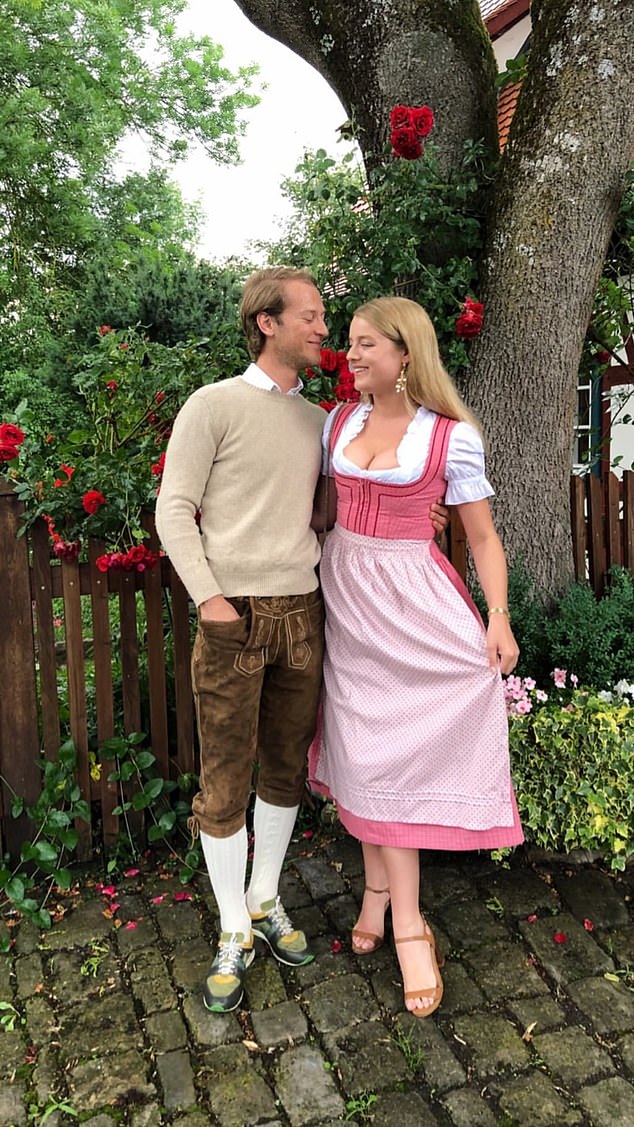 I hear that Princess Alexandra’s granddaughter, Flora Ogilvy, 26, (right with Timothy Vesterberg) will have a marriage blessing at St James’s Palace on Friday, with the snaps due to be published by a ‘Conde Nast publication’, believed to be Vogue, for which the art curator writes.

The Queen’s grandson Peter Phillips caused a furore when he sold the rights to his wedding to Hello! for a reported £500,000. Now, another Royal is dicing with danger by granting an exclusive to a different glossy magazine.

I hear that Princess Alexandra’s granddaughter, Flora Ogilvy, 26, will have a marriage blessing at St James’s Palace on Friday, with the snaps due to be published by a ‘Conde Nast publication’, believed to be Vogue, for which the art curator writes.

But a pal insists she will not be paid. She and financier Timothy Vesterberg, 27, originally married privately at the Chapel Royal last autumn due to lockdown restrictions.

The Duke of Richmond was in fine form at Glorious Goodwood, on his West Sussex estate, but he’s revealed that he had previously caught Covid — and from his doctor, of all people.

‘I went for my check-up and he gave me the coronavirus,’ says the Duke, Charles Gordon-Lennox, 66. ‘He was very apologetic. He rang me and said, “How are you feeling?” I said, “I’m not feeling very good.” He said, “I hate to tell you, but I think I’ve got Covid.” ’

The Duke adds: ‘It was just five days of a bit of fever, in bed a bit, but I was fine.’