Staging theatre shows outside is not a new idea but being able to bring excellent production qualities to those shows is – and it’s part of a concept that will allow for performances in a post-pandemic environment.

Born in a Taxi, a theatre group based in Melbourne’s west, has devised The Cube, a pop-up venue complete with high-quality sound, lights and stage. Melbourne City Council has just allocated $15,000 in funding to the group for a show called Butterfly House, to be staged in The Cube at the Royal Botanic Gardens next year. 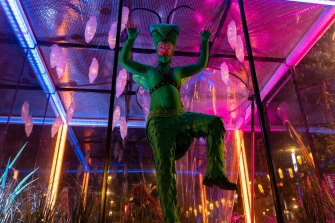 Butterfly House will be staged at the Botanic Gardens next year. Credit:Catherine Smith

Co-director Carolyn Hanna says the money will allow the organisation to realise a dream by performing the show in such a rarefied and relevant environment.

“It’s generally putting a microscope on the work that insects do that is invisible,” Hanna says of the show. “It’s a mix of visual art, technology and performance, all to create this interactive, engaging, entertaining and educational piece of art which has real-world benefits for the community as well as for biodiversity.”

Designed to shed light on the many endangered insects in the world,the show also explores the magic of metamorphosis, demonstrating how a caterpillar transforms into a butterfly. 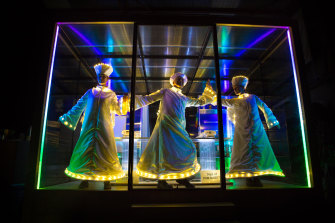 The Cube is an innovative pop-up theatre space, which has housed a work called Enlighten about death, featuring angels.Credit:Emma Jane Pirvel-Collins

“We want to make the invisible visible, so there’s a giant praying mantis and a human-size ladybird,” Hanna says. “That’s the thing about insects – they look like aliens. Kids are drawn to them because they are extraordinary looking, but they’re also scary.”

Artist and designer Gabriel Paananen created the Butterfly House installation, with audiences also making things, mainly from recycled materials: grasses from old packaging, flowers from plastic bottles, pathways from recycled CDs and hanging cocoons from recycled bottles. The show runs over three days and is all about habitat, with some audience members given seedlings to take home or to plant, depending on where the work is staged.

Designed to get several generations of the family involved, from kids to grandparents, Butterfly House has been in development for over six years, with a trial of the show held in Stonnington earlier this year. Somewhat prophetically, The Cube itself was devised long before the pandemic. Designed and built by David Murphy, it has come into its own in recent times.

Born in a Taxi was one of several organisations to win funding, with more than $1 million awarded by the Melbourne City Council. Other recipients include the Melbourne Women in Film Festival, which will showcase inspiring filmmakers; Tash Atkins for an opera based on the life of Mademoiselle Julie Maupin, an LGBTQI+ opera singer and swordsperson born in the 17th century; Rebecca Bracewell, for an interactive sound installation with hearing aids that enables listeners to take creative control over what they hear; and Mari Lourey, for a new play with themes of exploration, belonging and heritage that centres around a 12-year-old girl and her extended family. 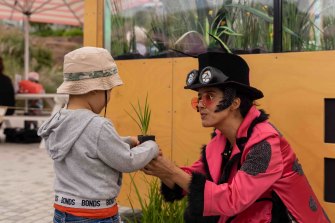 Butterfly House at Prahran Square in City of Stonnington.

The arts sector has been devastated by lockdowns and the return of audiences in large numbers to theatre venues, concert halls and other live music venues is not expected any time soon. Lord Mayor Sally Capp said the funding will provide much-needed support for 101 projects and 1500 artists, while also attracting people back into the city.