When addressing the matter on the ‘Rocket Hour’ podcast, the ‘Tiny Dancer’ hitmaker claims that he has requested a meeting with the British Prime Minister, but has yet to hear back from him.

Earlier this week (ends September 17), Elton revealed he hasn’t heard back from the U.K. leader after he requested a meeting to address the “red tape” performers now face when they try to arrange live shows in Europe.

The “Tiny Dancer” hitmaker said on the “Rocket Hour” podcast on Wednesday, September 15, “What has happened is that it’s impossible for young artists financially to pay for visas, negotiate their way through all of the red tape that’s necessary for going to Europe.”

“As it stands, the rules that were enacted at the beginning of 2021 do not guarantee visa-free travel for musicians in the European Union and have prompted fears that touring artists will incur large fees in many of the countries they visit.”

“It’s financially impossible for them to [tour],” raged the award-winning musician, according to The Independent.

“So I’m on the warpath to try and get this sorted out. And I’ve requested a meeting with Boris Johnson, I’ve yet to hear back from him,” he added.

In August, a spokesperson for the Department for Digital, Culture, Media and Sport (DCMS) announced the group had negotiated with 19 EU countries to allow British musicians and performers to conduct short tours without the need for a visa, but Elton reportedly condemned it as insufficient, calling it a “rehash of what we already know.” 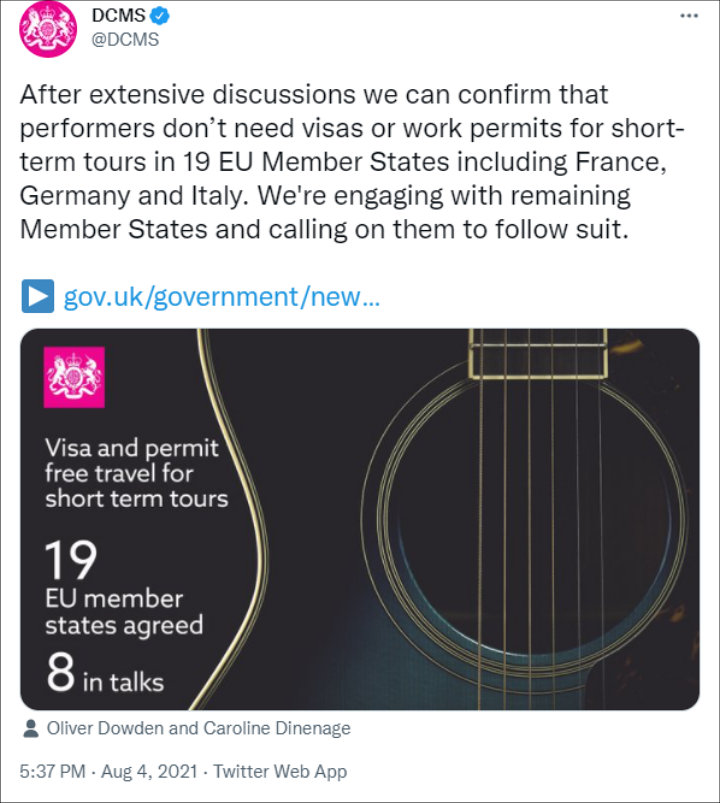 Elton has been vocal in criticizing the government over the trade deal that made it difficult for young artists to tour Europe. “Either the Brexit negotiators didn’t care about musicians, or didn’t think about them, or weren’t sufficiently prepared,” he wrote for The Guardian newspaper in February.

“They screwed up. It’s ultimately down to the British government to sort it out: they need to go back and renegotiate,” the “Don’t Go Breaking My Heart” hitmaker went on to say.