‘My biggest achievement from 2021!’ Frankie Essex looks back on her 2st weight loss in throwback snaps as she vows to keep up good habits in 2022

Frankie Essex looked back on the two-stone weight loss she achieved in 2021 in throwback snaps uploaded to her Instagram on Wednesday.

The former reality star, 34, looked trim and toned in pictures taken after her impressive body transformation as she posed in grey Calvin Klein underwear.

Frankie previously said that her original weight gain was due to being ‘fed up’ in lockdown but that by controlling her portion sizes and changing her routine she managed to shed the pounds. 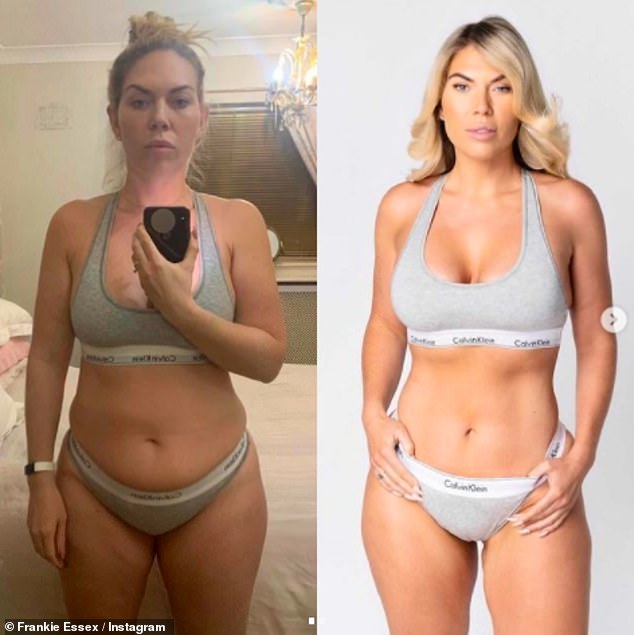 Wow: Frankie Essex looked back on the two-stone weight loss she achieved in 2021 in throwback snaps uploaded to her Instagram on Wednesday

Looking back on her transformation Frankie said it was one of her biggest achievements of the year and that she was keen to keep up her good routine for 2022.

She penned alongside the image: ‘I’m back! Who remembers my transformation from last year with @mfgoalgettersuk.

‘It was definitely one of my biggest achievements from 2021 and it’s safe to say I have since stuck to making better eating habits and keeping up with my fitness as much as possible. 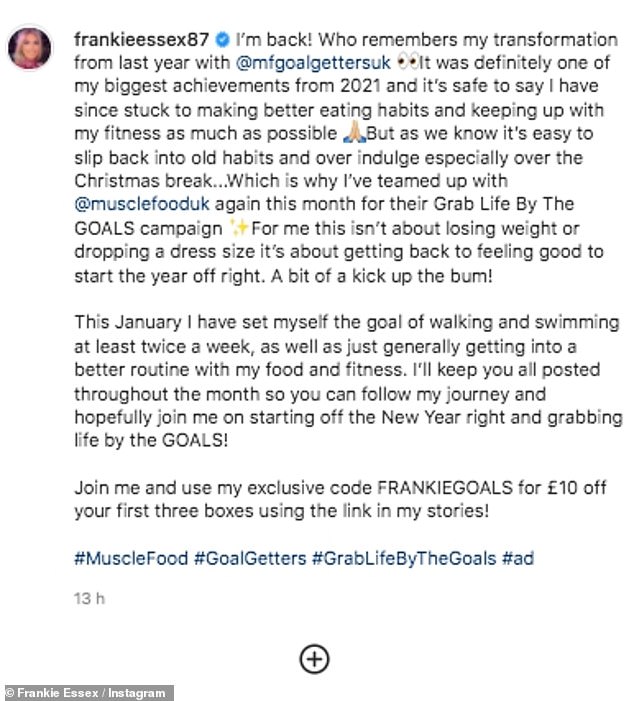 Proud: Looking back on her transformation Frankie said it was one of her biggest achievements of the year and that she was keen to keep up her good routine for 2022

‘But as we know it’s easy to slip back into old habits and over indulge especially over the Christmas break…Which is why I’ve teamed up with @musclefooduk again this month for their Grab Life By The GOALS campaign.’

She continued: ‘For me this isn’t about losing weight or dropping a dress size it’s about getting back to feeling good to start the year off right. A bit of a kick up the bum! This January I have set myself the goal of walking and swimming at least twice a week, as well as just generally getting into a better routine with my food and fitness.’

She signed off by saying: ‘I’ll keep you all posted throughout the month so you can follow my journey and hopefully join me on starting off the New Year right and grabbing life by the GOALS!’ 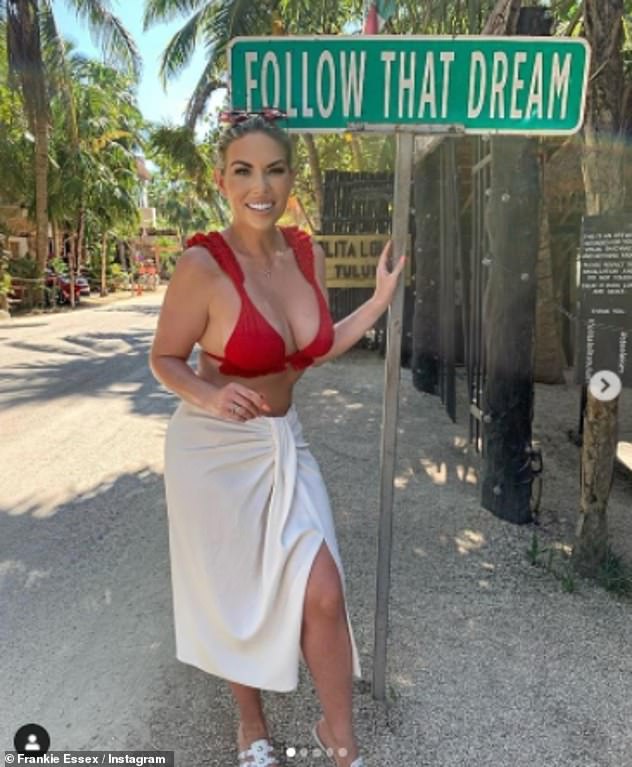 Radiant: Frankie has previously credited getting back into a routine as a big part of her weight loss success (pictured in February)

Last year Frankie admitted her body transformation meant she had got her ‘confidence back’ after her weight crept up to 12 stone 13 pounds in November 2019.

Frankie confessed that she hit ‘breaking point’ four months before and felt like ‘a mess’ after her healthy eating habits went ‘wayside’ when restaurants briefly reopened.

Talking to Closer magazine after slimming down to 11st, the reality said: ‘I’m proud of my transformation and I feel like I’ve got my confidence back. I’ve lost weight all over but I’ve mostly trimmed my belly and waist.’ 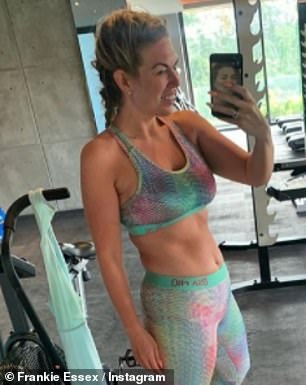 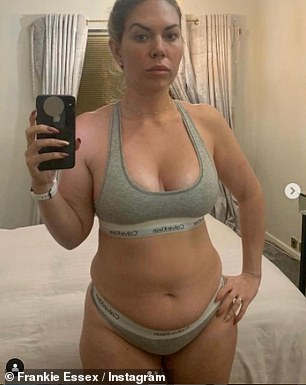 Weight loss: Despite being fairly healthy before, she has previously revealed she had problems with portion control and frequent snacking throughout the day during lockdown (pictured in February 2020, left, and November 2019, right)

Frankie admitted that due to lockdown and then restaurants briefly reopening again, her weight slowly crept up as she opted for ‘easy’ takeaways over home cooked meals while her exercise came to a ‘standstill’.

The reality star, who has a slow metabolism, said that she ‘loves’ food but she was going wrong with her portion sizes as she would eat the same as her personal trainer boyfriend Luke, 31, who ‘can eat a lot’.

Talking about her decision to change, Frankie said: ‘I knew I was already overweight and with Christmas coming up, I realised that if I put on any more weight, I’d be close to being the heaviest I’d ever been. I just couldn’t do that to myself.’

She added: ‘I can’t keep going up and down because it’s not good for you in the longterm, it makes you feel sluggish and puts you at risk of diabetes. Plus I haven’t had children yet and I wan’t to be as healthy as I can when the time comes.’

The reality star noted that as well as her weight loss she has noticed an improvement in her skin and that she now has a ‘slimmer’ face.

Although despite her staggering two stone weight loss, Frankie admitted that her boyfriend Luke doesn’t want her to get ‘too skinny’ as he loves her curves and bum.

Reality star Frankie has been open about her fluctuating figure in the past, having shed two stone back in 2016, before gaining weight a year later due to a crippling knee injury.

The older sister of Joey Essex overhauled her eating habits once again in 2019, but insisted she’s struggled to commit to the lifestyle since COVID-19 struck. 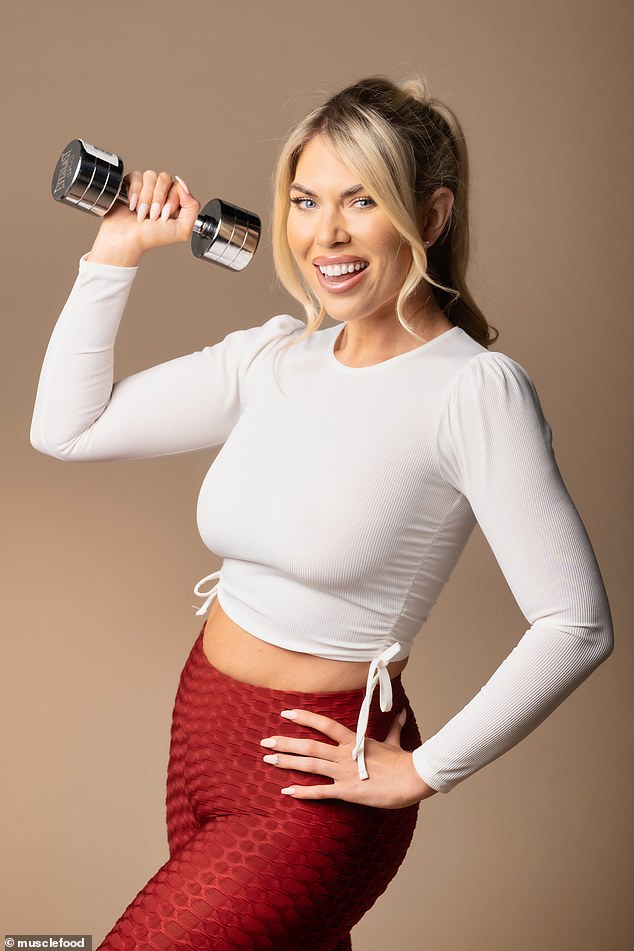 The results: The older sister of Joey Essex overhauled her eating habits once again in 2019, but insisted she’s struggled to commit to the lifestyle since COVID-19 struck