She was a professional dancer and qualified personal trainer before entering the Love Island villa in 2017.

And Gabby Allen has returned to her career as a PT, as she showcased the results of her workout regime in a racy topless snap posted to social media on Saturday.

The reality TV star, 28, pressed against her cleavage and exposed athletic physique, after declaring that she shouldn’t be ‘penalised’ for showing off the hard work she puts into her body as a fitness trainer. 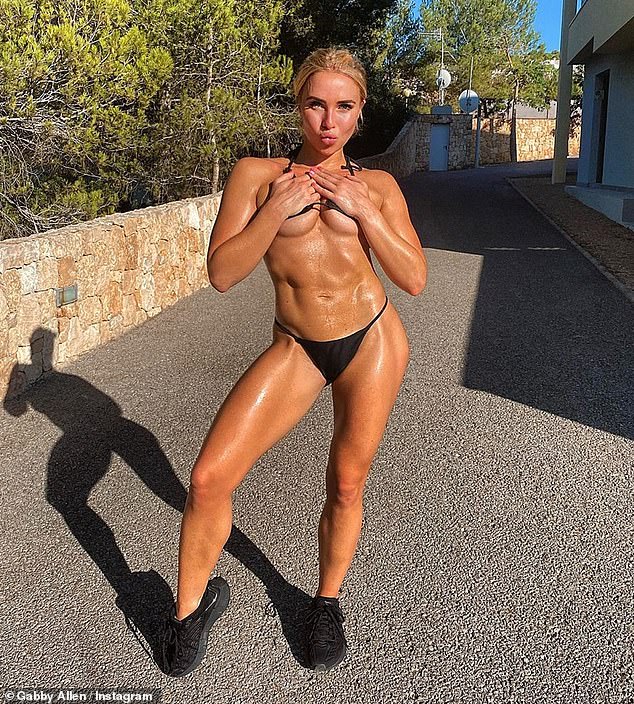 Bare all: Gabby Allen put it all on display for a sizzling social media snap while wearing a minuscule black bikini and matching black trainers in Ibiza, Spain on Friday

Gabby wore a black thong with a matching bikini top that she positioned above her cleavage to expose her ample under-boob.

The star looked like she had just taken part in a challenging workout session, as she emanated a dewy glow and kept her makeup look to a minimum. 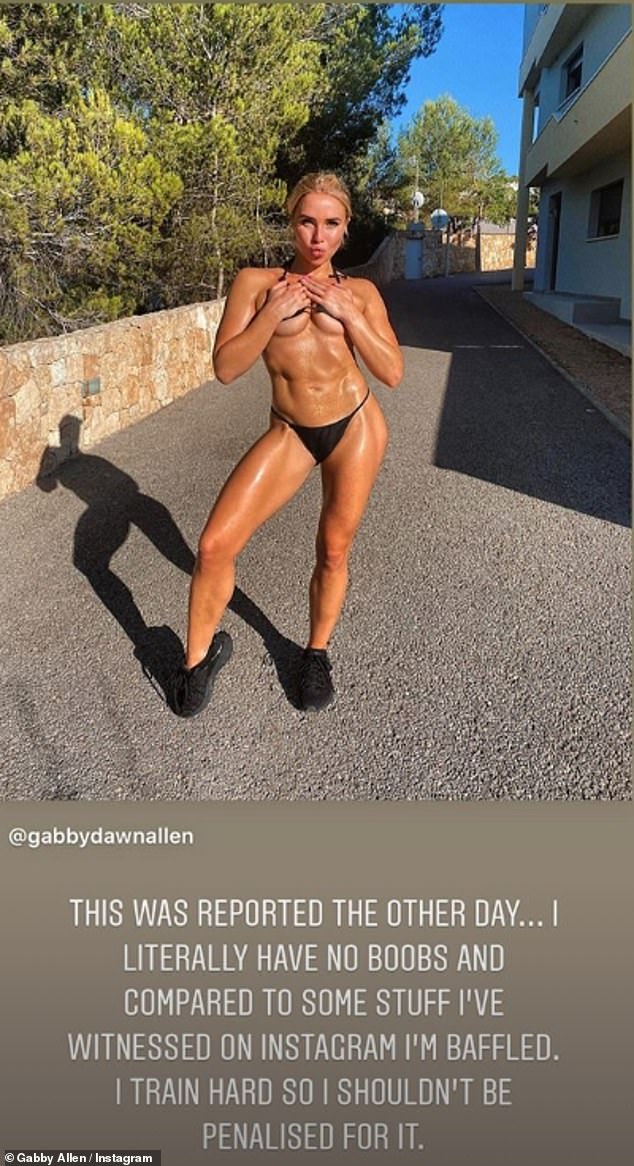 Hard work: The Love Islander, 28, shunned criticism as she defended her decision to reveal the fruits of her labour as a fitness instructor 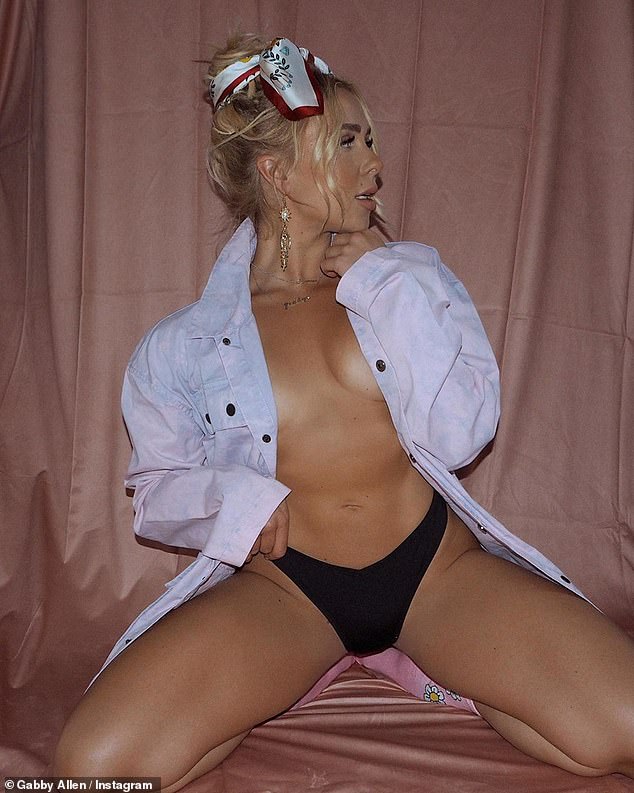 Blonde bombshell: The reality star frequently displays her taut physique online such as a picture she posted earlier this month wearing nothing more than a thong and denim jacket

Gabby styled her stunning blonde dresses in a practical bun and wore a pair of black trainers as she cheekily pouted towards the camera.

On the social media post, she defended her decision to reveal her half-naked body.

She said: ‘I literally have 0 boobs, I train & work so hard, compared to some of the stuff I see on Instagram I am baffled as to how this was reported.

‘I shouldn’t be penalised for showing my physique as a PT.’ 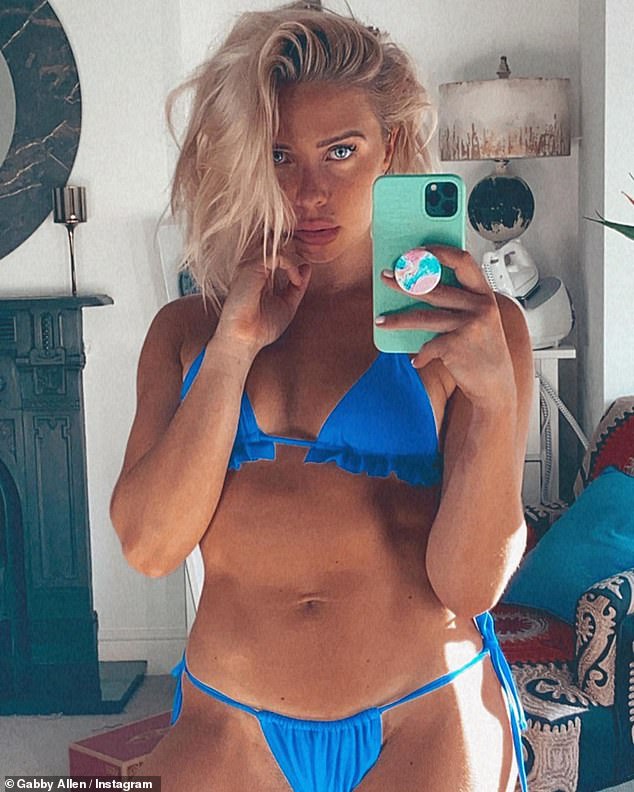 ‘Baffling: Gabby couldn’t believe that her followers reported the racy topless pic as she said ‘compared to some of the stuff I see on Instagram I am baffled as to how this was reported’

According to the reality star, she couldn’t understand why people chose to report her racy snap in comparison to the other revealing content that is available on social media.

Gabby believes she should be allowed to showcase the fruits of her labour.

She said in another social media post on the matter: ‘This was reported the other day, I literally have no boobs and compared to some of the other stuff I’ve witnessed on Instagram, I’m baffled.

‘I train hard so I shouldn’t be penalised for it.’

The personal trainer has been making the most of displaying her toned physique on holiday in Ibiza, Spain this week with her rumoured boyfriend, Brandon Myers.

Gabby and her Ex On The Beach star beau, 34, were spotted cosying up to one another in the Mediterranean hot spot as they party with pals.

The pair were first reported to be dating in May, when Brandon posted a flirty comment under one of her scantily-clad bikini snaps. 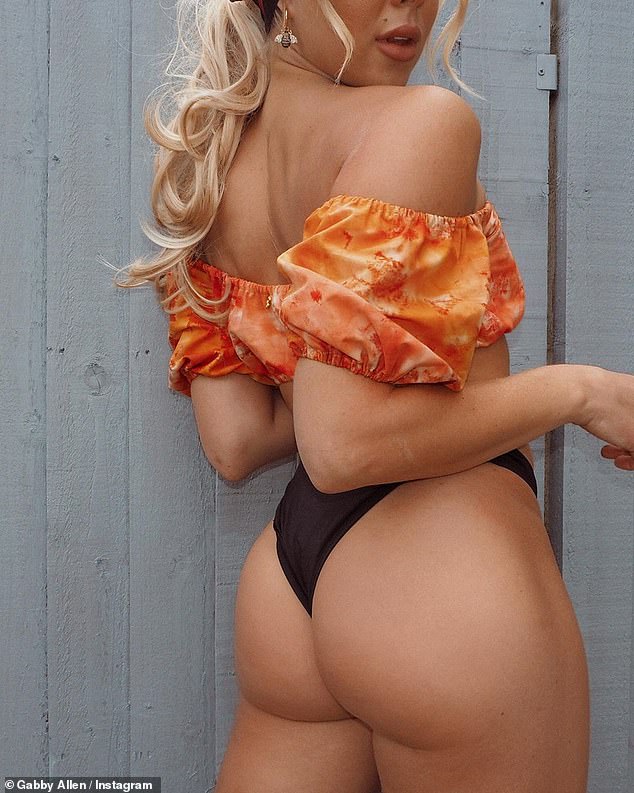 Ample assets: The fitness enthusiast said she shouldn’t be ‘penalised’ for showcasing her physique that is a result of her job and claimed that despite her hard work, she has ‘0 boobs’

But the fitness enthusiast insisted they are little more than close friends, telling OK!: ‘No. We’ve known each other for a long time. He’s the loveliest person and a really good friend of mine, but that’s all it is.

‘Someone must have seen him comment on a picture on my social media, and automatically assumed he’s my boyfriend.’

Last month, Gabby insisted Brandon was a ‘really good friend’ but they appear to be getting increasingly closer in the sweltering Spanish heat. 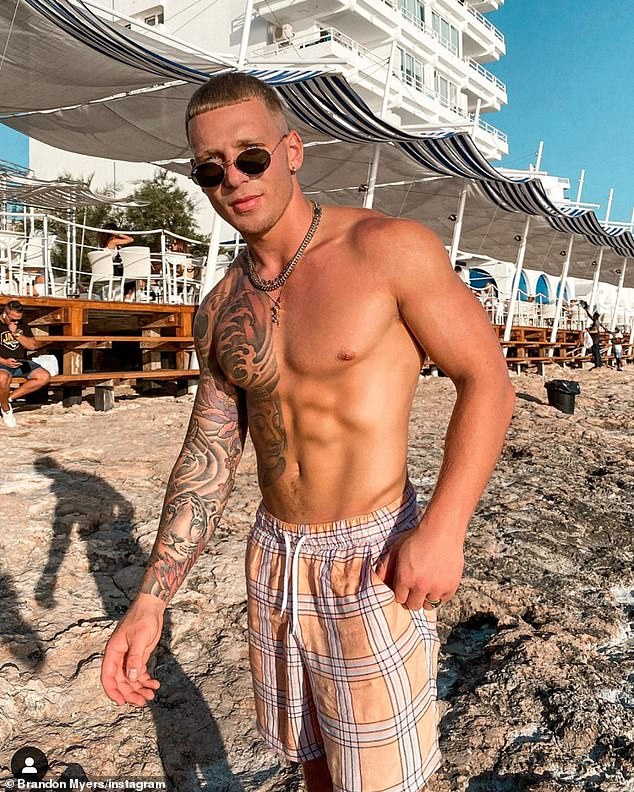 New love? The personal trainer has been making the most of displaying her toned physique on holiday in Ibiza, Spain this week with her rumoured boyfriend, Brandon Myers (pictured)