Grimes is showing off her fresh new ink!

The 33-year-old singer took to Instagram over the weekend to reveal a photo of the massive white ink tattoo she recently got done on her back at a tattoo shop in Los Angeles.

“Full back in white ink by @tweakt w sum help from the alien computer brain of @nusi_quero,” she captioned it. “Don’t have a good pic cuz it hurts too much and I need to sleep haha, and it’ll be red for a few wks , but gna be beautiful alien scars. Hope everyone’s having a good day.”

Nusi Quero, who helped come up with the design digitally, took to Instagram Stories to share some more behind-the-scenes pics and information on how Grimes’ new tattoo came to be.

“Last night was an amazing experience, @tweakt and I collaborated on a tattoo for @grimes entire back, a courageous and beautiful decision and Talisman she will carry with her from here forward,” he wrote. “An armor, a spectral field that will affect and protect her in ways unknown but no doubt with a benevolence of some kind.”

“@tweakt drew the base shapes on an iPad and then emailed me the image file. I turned it into 3D geometry, selected vertices on the shape and guided and grew the embellishments along and around the shapes that he laid down first with a series of procedural operators (math rules) in a way that I felt spoke to his shapes, and @grimes,” he continued. “I then sent it back to him as a png overlay and ets etc and they went in on it immediately full on 1 take 1 session!” 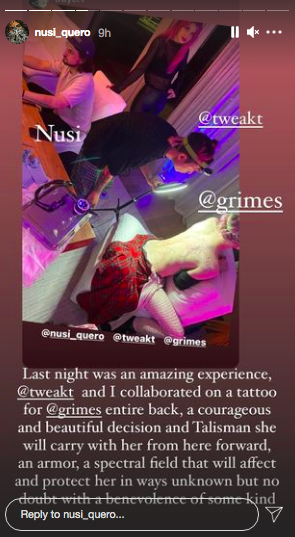 Last October, Grimes revealed in an interview with the New York Times that the child she shares with Elon Musk, son X Æ A-XII (whom they call ‘X’), was already a big fan of “radical art.”

“I’ve watched Apocalypse Now and stuff with my baby,” she shared at the time. “He’s into radical art. Like, he just actually is, and I don’t think it’s problematic to engage with them on that level.”

The singer also revealed that she and Musk were trying to move their son away from traditional baby entertainment, partnering with the Endel app to create an “A.I. Lullaby” for X in an effort to produce “a better baby sleeping situation.”

“When you have a baby, you’re always using white noise machines. It’s much easier to get them to sleep if you train them on some kind of audio situation,” she explained. “And so I was just like, could this be more artistic? In general, stuff for babies is really just creatively bad. I don’t want your first introduction to the world to just be all this aimless crap.”

Meanwhile, Musk shared a rare pic of their baby boy via Twitter back in March while on a trip to “Starbase, Texas,” a town the Tesla CEO is hoping to create at a SpaceX facility along Texas’ Gulf Coast.

Hear more on their family in the video below.