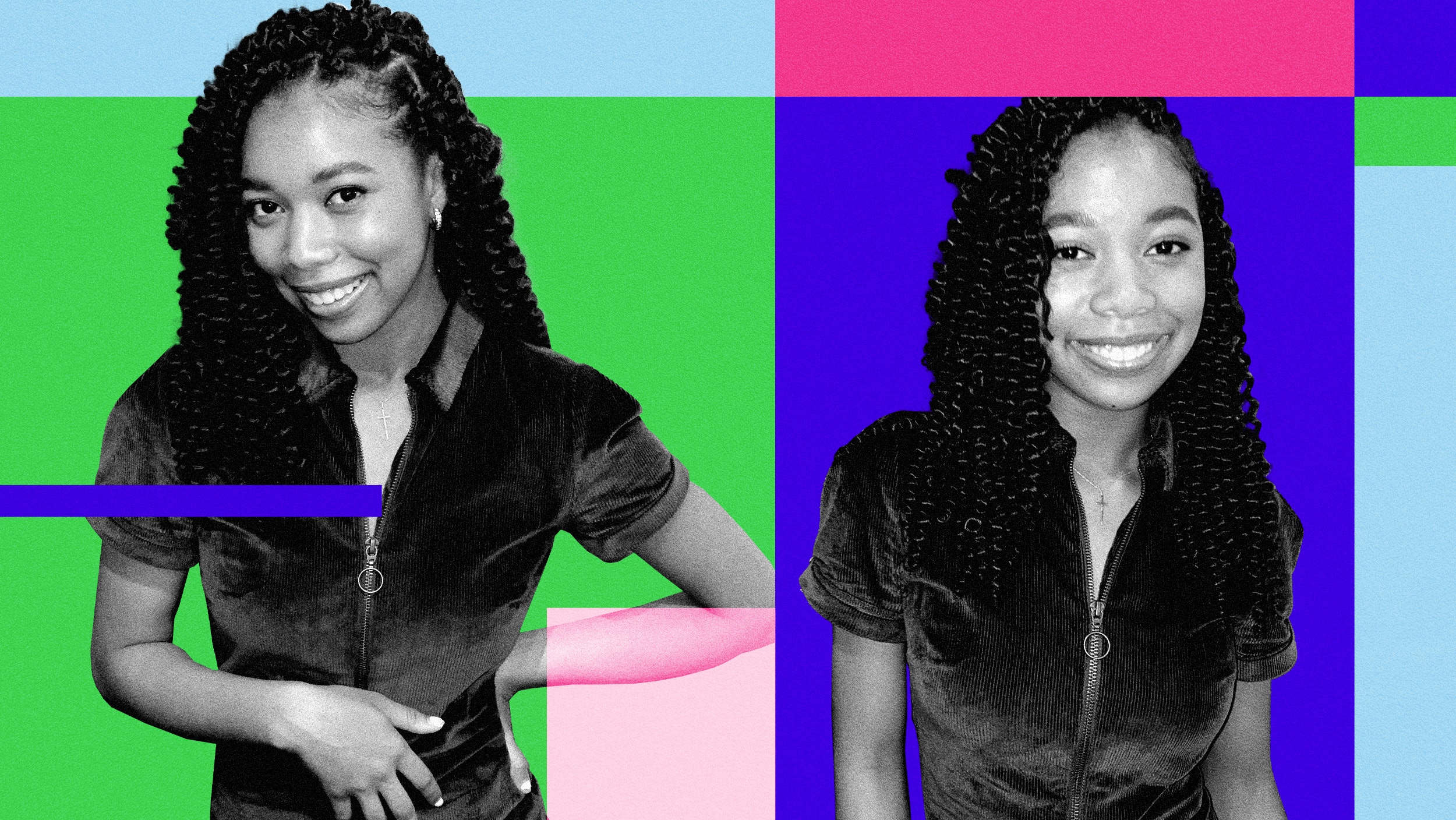 They say child stars grow up quickly, but actor Kyla-Drew takes that to another level. At 16 years old, she’s already enrolled in college, with goals of creating her own production company in the future. And she’s well on her way to moving up in Hollywood: After getting her start on kids’ shows like Nicky, Ricky, Dicky & Dawn and No Good Nick, Kyla-Drew is now starring in Dad Stop Embarrassing Me!, a Netflix sitcom that puts her opposite Jamie Foxx — a big step up from her Disney Channel and Nickelodeon days.

On the show, Kyla-Drew plays Foxx’s character’s daughter Sasha, who is inspired by Foxx’s real-life daughter Corinne Foxx, a producer for the series. "I really straightened up and tried to act mature because I was around all these adults," Kyla-Drew tells Elite Daily. Luckily, she fit right in with her co-stars. "We all clicked from day one, and I can say honestly they’re my family. You know, it’s Uncle Jamie, Uncle David [Alan Grier], Auntie Porscha [Coleman]," she says.

This isn’t the first time Kyla-Drew has shared the screen with big names; she’s had guest starring roles on major network hits like Grey’s Anatomy, How I Met Your Mother, and The Good Doctor. Luckily for fans in awe of her already-impressive list of accomplishments, Kyla-Drew has documented her illustrious career on Instagram, where she shares celeb selfies and exciting life updates like the ones below.

This interview has been edited and condensed for clarity.

Bonding With Corinne & Jamie Foxx On Dad Stop Embarrassing Me!

Elite Daily: What was it like filming during the coronavirus pandemic?

Kyla-Drew: It’s one for the books. I’m never going to forget this kind of experience. I personally think it allowed the cast and crew to get closer together because we were all quarantined outside of the set, so when we were on set we were all excited to be there, excited to get to know one another. It just helped build that chemistry even more.

ED: What advice did the Foxxes give you to play a character inspired by their real lives?

KD: A major thing that they both told me was they wanted me to make the character my own, and to just have fun with it and be as natural as possible. They would guide me, but they weren’t, like, directing me to act a certain type of way.

ED: Did Jamie Foxx give you any career advice during your time together?

KD: Every day I learned something from Jamie. He can tell the best stories. The stories he would tell me really helped me, and it’s honestly the best education someone could give me. He would just always tell me life lessons, lessons about things that are going to happen in this industry, and I feel blessed and honored to be able to hear those stories firsthand from someone who is experienced in Hollywood.

ED: Is there a specific story he told that resonated with you?

KD: This was a good one — he told me about how one time he had this audition and he just did it totally the wrong way because he was intimidated, and he told me never to feel intimidated and to hold my own, and take the joke and run with it.

ED: Do you have a favorite Jamie Foxx project?

Meeting Michelle Obama On Jessie In 2014 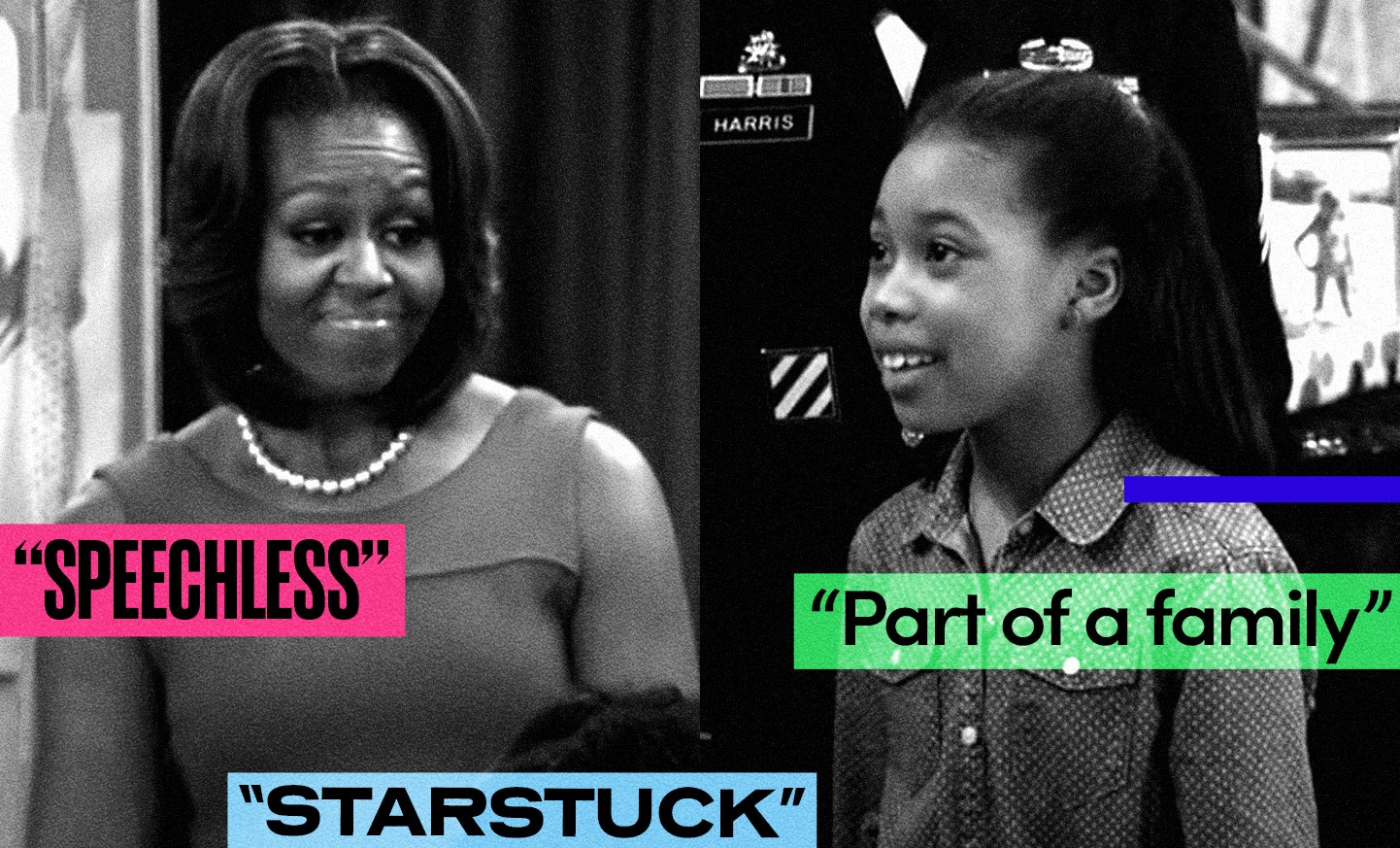 ED: How did you react to finding out you were going to guest-star on Jessie, and with the first lady no less?

KD: All my agents and my manager called me, and normally when they call you in a group FaceTime I know that something went down. They told me, "Kyla-Drew, you’re booked. You booked Jessie," and then they told me that it was going to be with a special guest, but I didn’t know exactly who it was until a couple hours later. They started calling my mom and asking for her information and a lot of personal things. We were very shocked by that because that never really happens on a guest-starring role. Then they ended up telling me it was Michelle Obama, and I freaked out a little bit. I don’t get starstruck easy, but I most definitely did with Michelle.

KD: I was rendered speechless when I first met her, but she was so sweet. I feel like if I was walking down the street, I would not know that was the first lady of the United States because she was just so humble and such a sweetheart. She spread so much warmth and really just invites you in. She’s the best; I love Mrs. Obama.

ED: What stands out to you the most about your time with her?

KD: After we had wrapped, she actually wrote me a little letter that said, "It was so great working with you" and, "Keep up all the good work that you’re doing." I have it framed with this picture of all of us. It’s hung up in my house and I pass it every day. She didn’t have to do that, but she’s just so sweet that she did. It was so thoughtful.

ED: You also got to co-star on Jessie with Cameron Boyce. What was it like to work with him?

KD: Cameron was very welcoming and made me feel a part of a family the first day I stepped on that set. He was such a light. It was such a highlight being able to work with him on the show. 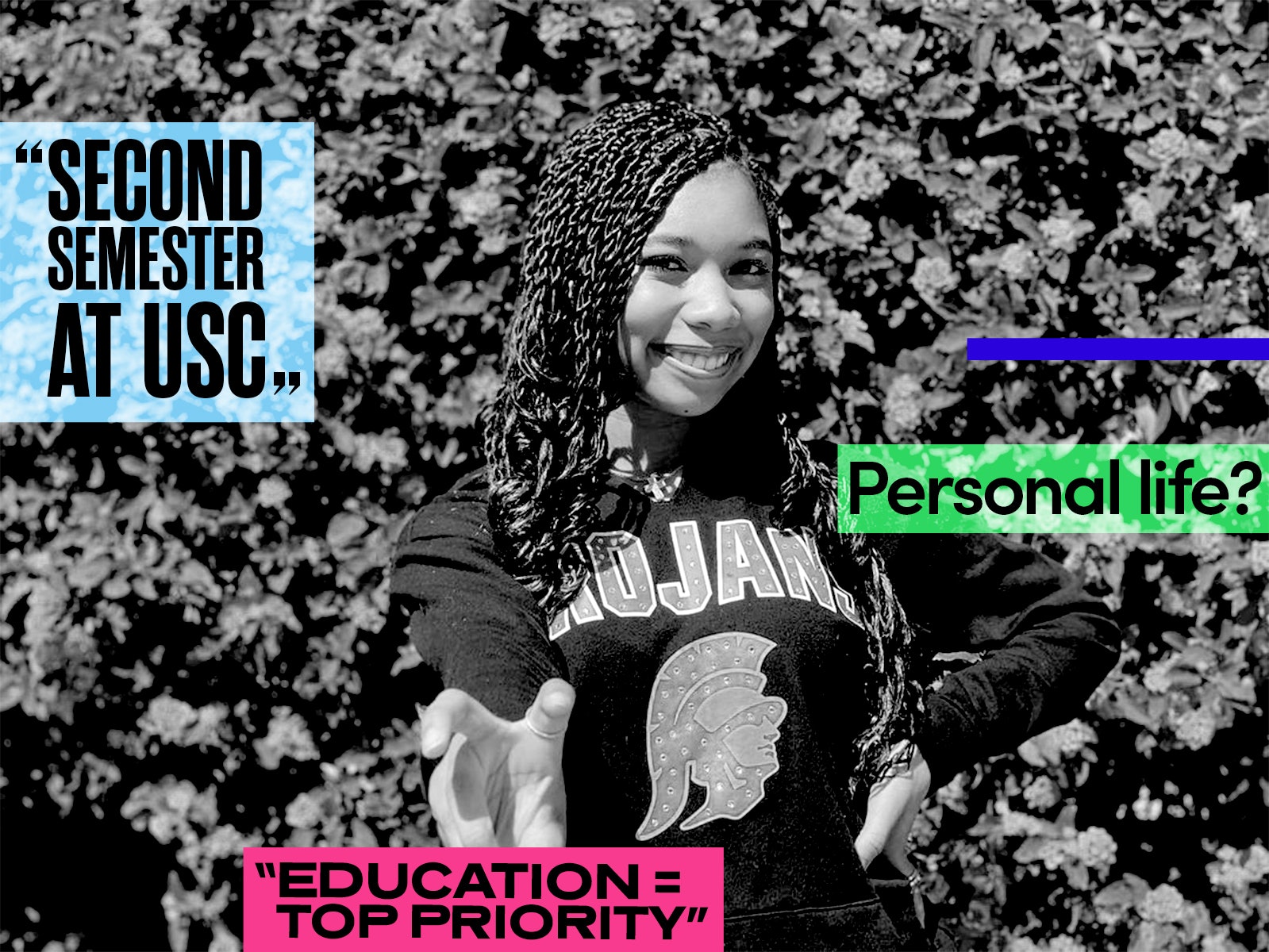 ED: How were you able to graduate high school at such a young age?

KD: Educational child abuse [laughs]. Whenever I would get in trouble, rather than taking away my phone or the TV or something, my mom would add another class to my schedule. Eventually she ran out of classes to add. I took chess, I’ve taken game design, I’ve taken a lot of classes that I didn’t need just because I was getting in trouble. So I ended up graduating high school when I was 15 years old, and then I went to community college for a year and got my associate’s degree in natural sciences, and now I’m in my second semester at USC.

ED: Did you take classes on the set of your acting projects?

KD: I’ve always disliked doing school on set because I could never get any work done. So I got my CHSPE (California High School Proficiency Exam), which is the equivalent to a high school diploma, when I was 12. But I wanted to actually get my high school diploma from the school I was going to, so that’s why I opted to continue and graduate at 15.

ED: What’s it like going into college at such a young age?

KD: It has its benefits. My professors and counselors are always so amazed and shocked when they find out I’m two to three years younger than everyone in my class. But honestly, I love it because I’m making friends with people — I hate to say this, but — on my maturity level.

ED: Considering you already have a successful acting career, what motivated you to pursue college?

KD: Education has always been a top priority for me. I do want to continue acting and being involved in the entertainment industry, and eventually I want to progress and start producing films and screenwriting, but I definitely want to have an education behind me so when I start my own production company I know what the heck I’m doing. That’s why I’m pursuing a business degree at USC and hoping to add something with journalism, so I can progress my career and be successful in whatever comes down the line.

ED: What’s the most challenging aspect of balancing college and acting?

KD: I would say fitting in a personal life. Oftentimes I don’t have time to hang out with my friends or anything like that because I’m so caught up in between school and work. But I know it will all be worth it in the long run.

ED: Have you been recognized by anyone on campus yet?

KD: I haven’t been to campus yet! But I have been recognized over Zoom. They’ll private message me like, “Oh, are you on this show?” or “Were you in that movie?” And I’m like, “Yep. That’s me.”

In Elite Daily’s I Can Explain… series, we’re asking celebrities to revisit their most memorable photos and tell us what really went down behind the scenes. Read more here.