They tied the knot in February 2019 after a two-month engagement.

And Heidi Klum and Tom Kaulitz proved their love is still strong as they shared a romantic sunset kiss in a new Instagram snap shared on Thursday.

The model, 48, turned up the heat for the sizzling image as she posed topless while covering her modesty with her arm. 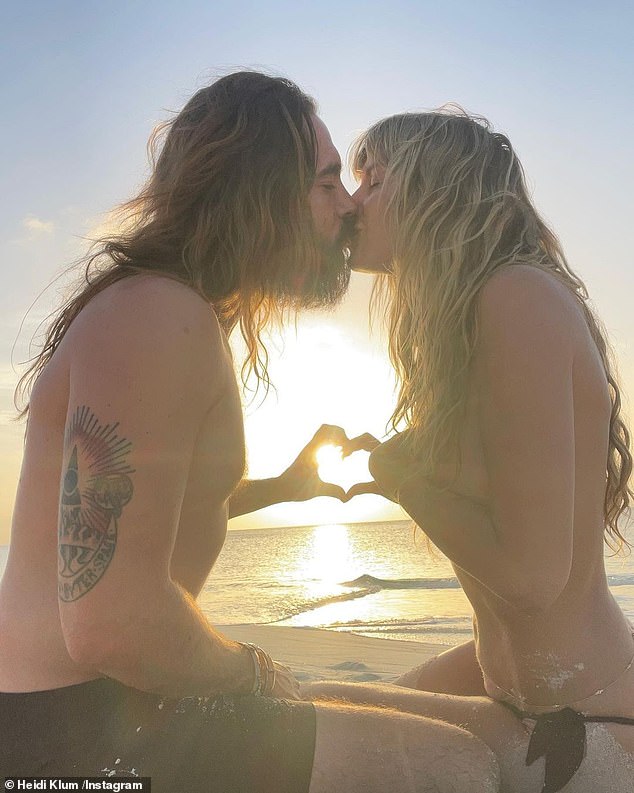 Heidi was sure to showcase her incredible physique as she ditched her clothes to smooch her shirtless Tokio Rocker beau, 31, for the photo.

She did however appear to be wearing a pair of black bikini bottoms for their day at the beach.

The loved-up pair formed a heart with their hands and they enjoyed a special moment as the sun went down over an idyllic beach. 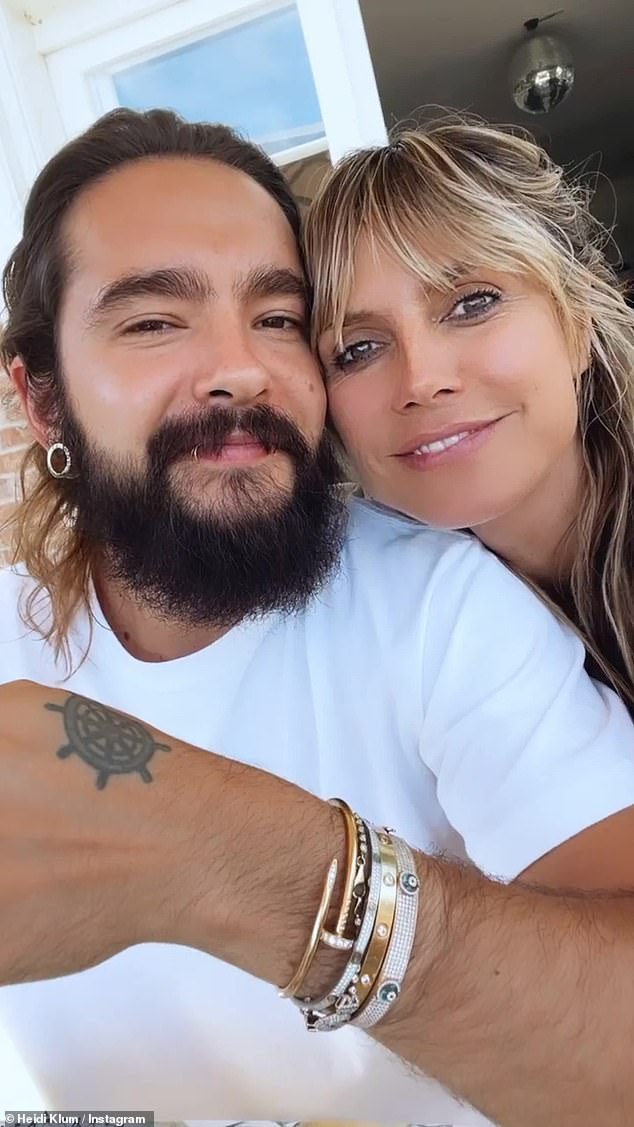 Devoted: The couple have been happily married since February 2019, tying the knot following a two-month engagement

The German beauty has been keen to showcase her incredible figure of late as on Tuesday, she flashed her toned stomach and plenty of underboob in homemade crop top while cheering on German football.

The Victoria’s Secret vet was cheering on a German soccer team as she said in her caption, ‘Good luck today Germany.’

Her Adidas shirt in black and white was for her team. It appeared as if she cut the shirt herself to expose her chest.

It comes as her former spouse Seal is reportedly unhappy about his daughter’s modelling ambitions.

The Kiss From a Rose hitmaker – who has Leni, 17, Henri, 15, Johan, 14, and Lou, 11, with Klum – admitted seeing his eldest child follow in her mom’s footsteps wouldn’t have been his first choice of career for her because it ‘seldom’ ends in happiness. 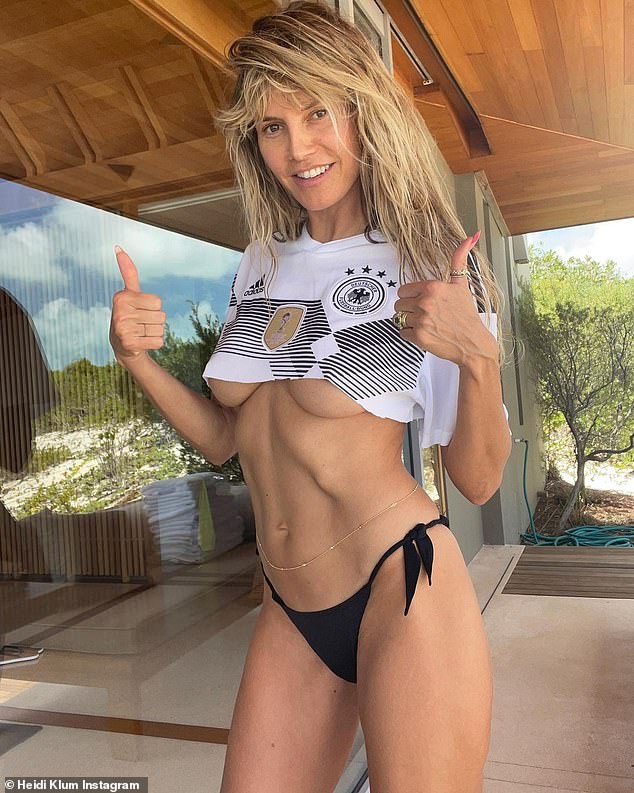 Flaunt: The German beauty has been keen to showcase her incredible figure of late as on Tuesday, she flashed her toned stomach and plenty of underboob in homemade crop top while cheering on German football

He said: ‘That’s a precarious road to take.’

But his kids are ‘just not all that impressed’ by his own career. He added to Us Weekly magazine: ‘We never really talk about my music at all.’

The Crazy singer doesn’t think his children have to face many ‘challenges’ in their lives.

He said: ‘[They] don’t have challenges in the grand scheme of things…

‘They live in a nice house. They don’t have to worry about food on the table. They have the benefit of a great education.’ 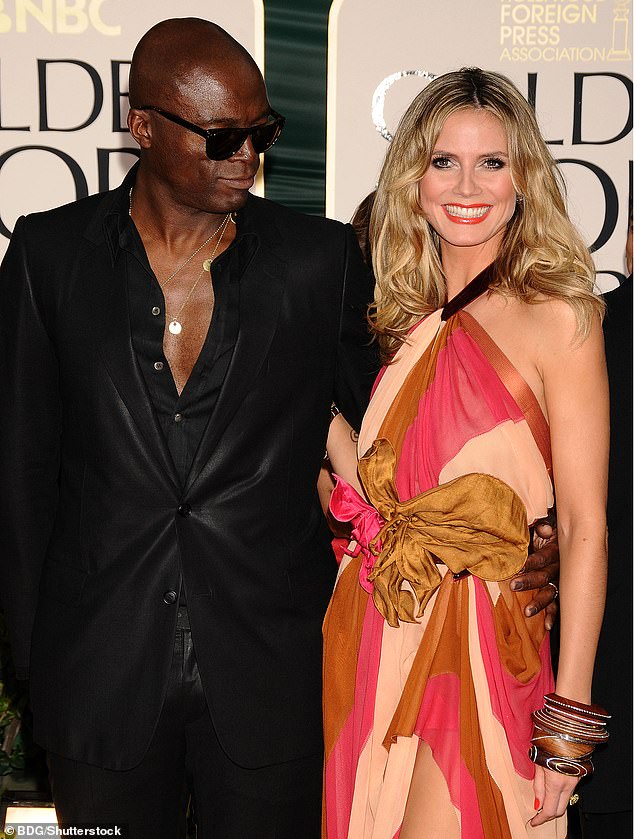 Ex issues: Heidi’s loved-up display with her husband comes as her former spouse Seal is reportedly unhappy about his daughter’s modelling ambitions (pictured together in  2011)

But Seal admitted keeping the kids grounded has been ‘challenging’ because he and Heidi – who he split from in 2012 – don’t work together as a team when it comes to raising their brood.

He said: ‘It can be challenging. It requires teamwork. If you are a team, if both parents are a team, then it’s really easy and that’s not a real challenge at all. … But you have to be a team. And if you’re not a team, then it can all fall to pieces.’

Asked if he has that with Heidi he replied: ‘No. … I never had that teamwork [with Heidi]. We never had teamwork.’

These days, the 58-year-old singer has an unknown partner who makes him ‘extremely happy’ and, unlike his relationship with Heidi, their bond is all about ‘love and teamwork’. 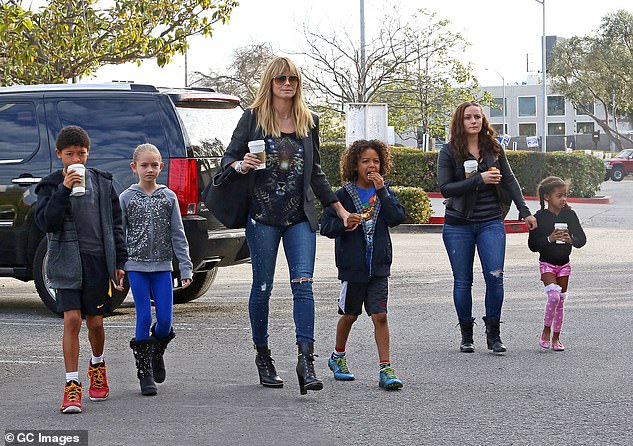 The little ones: Klum is seen with her children, Henry Samuel, Johan Samuel, Lou Samuel and Leni Samuel in 2014 in Los Angeles