That beats eating kangaroo anus! I’m A Celeb’s Matt Hancock, Sue Cleaver and Jill Scott LEAVE camp by helicopter for a luxurious BBQ on the BEACH after winning challenge

Matt Hancock, Sue Cleaver and Jill Scott got to leave the I’m A Celebrity jungle on Thursday – after they won a chance to have some surf and turf BBQ on the beach.

Jill, Mike Tindall, and Owen Warner were chosen by their campmates to take on the Scareground challenge which saw them write their co-stars names on balls, before putting them into a tombola.

Three winners were picked out and the lucky trio were able to escape the conditions of camp for the day. 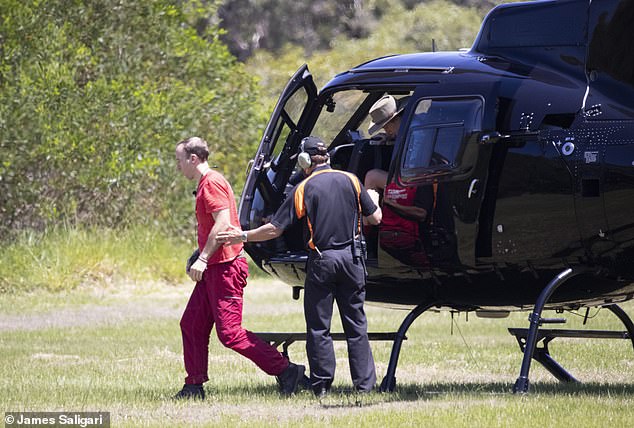 That doesn’t look like the jungle! I’m A Celeb’s Matt Hancock, (left) Sue Cleaver and Jill Scott LEFT camp by helicopter for a luxurious trip to the BEACH after winning challenge on Thursday 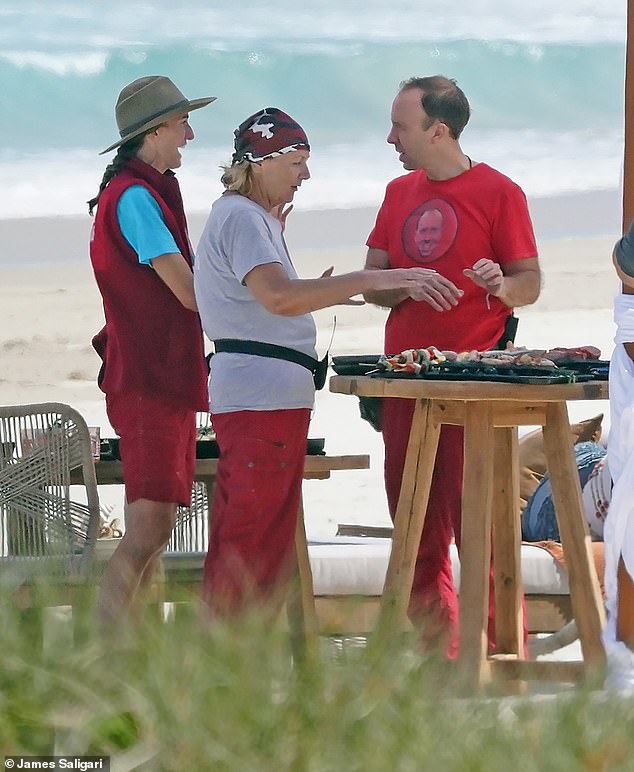 That doesn’t look like the jungle:  The group got to  tuck into a surf and turf BBQ by the sea – pictured (L-R) Jill Scott, Sue Cleaver and Hancock)

And judging by these pictures, food-loving Owen did not get to go on the trip, despite the group writing his name on the balls, so that he would get chosen.

The group all got to change out of some of their stinky jungle clothes as well to wear T-shirts which had their faces emblazoned on the front.

Matt could be seen taking on cooking duties as he stood behind the BBQ holding out his kebabs.

Ahead of the trip in the Bush Telegraph, Mike Tindall admitted: ‘On a beach, BBQ, surf and turf… sounds absolutely amazing.’ 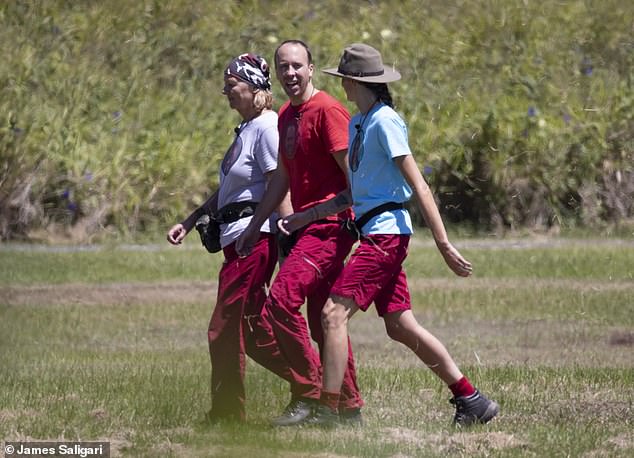 Smiles all round; The trio all looked delighted as they stepped out into the sunshine 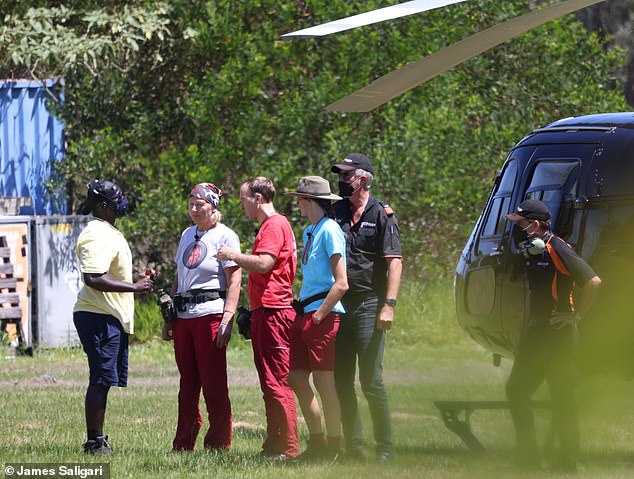 The others are going to be so jealous: They were met by crew members as they got to eat a posh meal for the first time in days 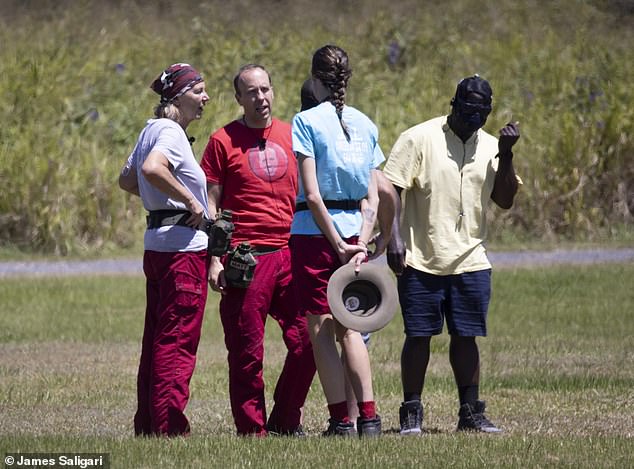 Chin-wag! They all enjoyed a good natter as they waited for their next instructions 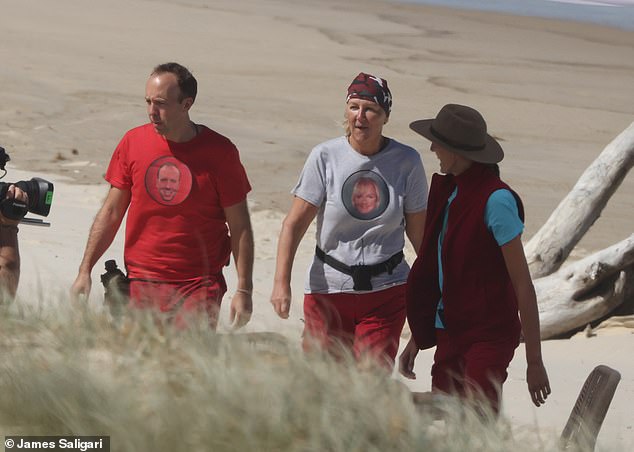 Oh hello, there! Matt happened to notice the camera as he walked along the dunes

Chris Moyles said: ‘I should go, “Look guys, even if I win, I’ll give it to someone else”, but I won’t.’ However, neither Mike nor Chris got to go.

The outing comes after it was claimed not everything about the camp is as real as it looks.

The waterfall where the campmates shower is actually a man-made water feature that turns on and off. 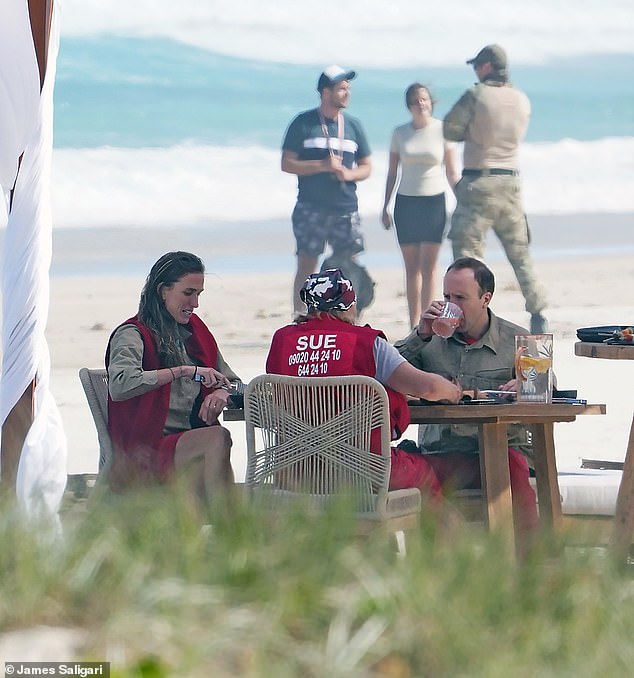 Tucking in: They group had tried to get Owen Warner to win the outing but by the looks of things, he didn’t get to join them 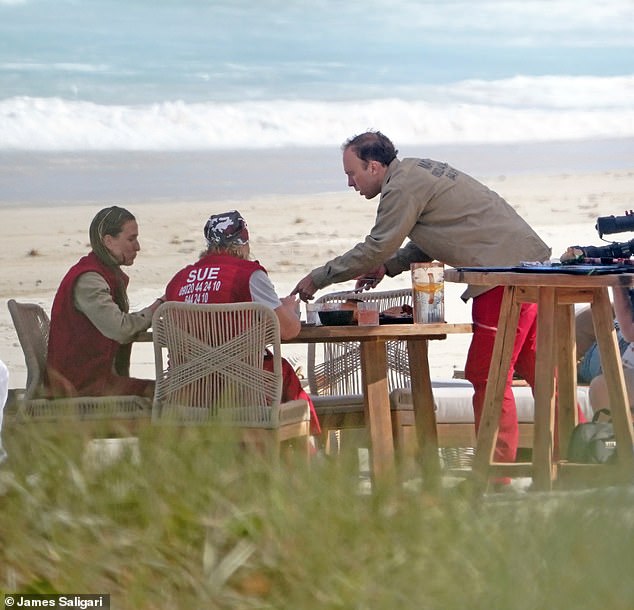 Doing his bit: Matt appeared to be helping to dish up the food to the lucky ladies 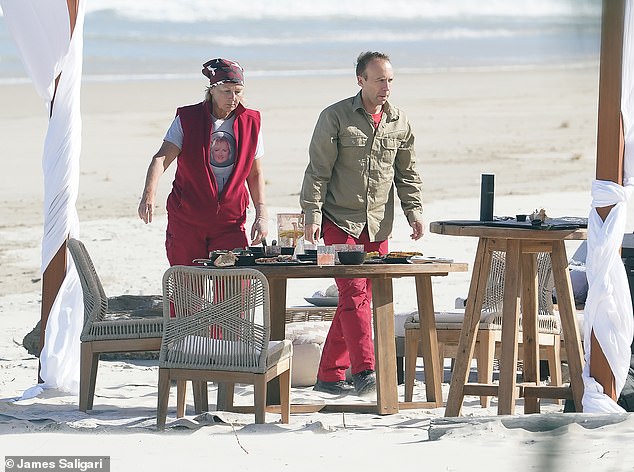 Nice to have a change: The group all got to change out of soem of their stinky jungle clothes as well to wear T-shirts which had their faces emblazoned on the front

In 2006, Lauren Booth revealed in the Daily Mail: ‘The waterfall, like the pool beneath it, was not part of the jungle at all, but a man-made creation.’

She added: ‘Unless, of course, ‘real’ rainforest waterfalls get turned off between three and six every afternoon.’

The same year it was also discovered by David Gest that the rocks dotted around camp were also false.

They were found to be made of papier-mache and hollow inside so that cameramen could hide inside them. 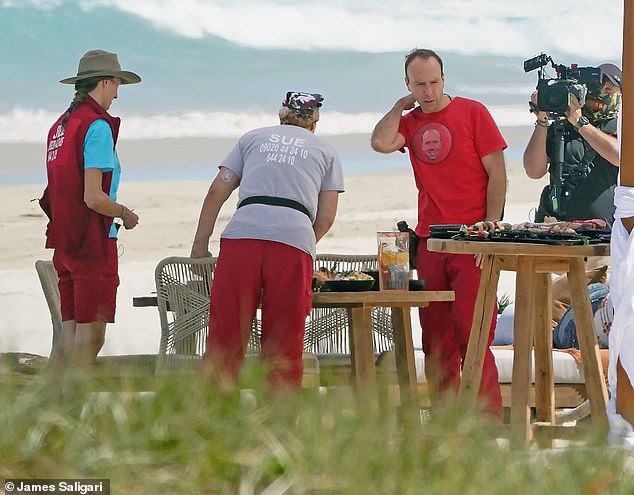 Sandy lanes: Cameras watched their every move during the outing as the group got to separate from everyone else 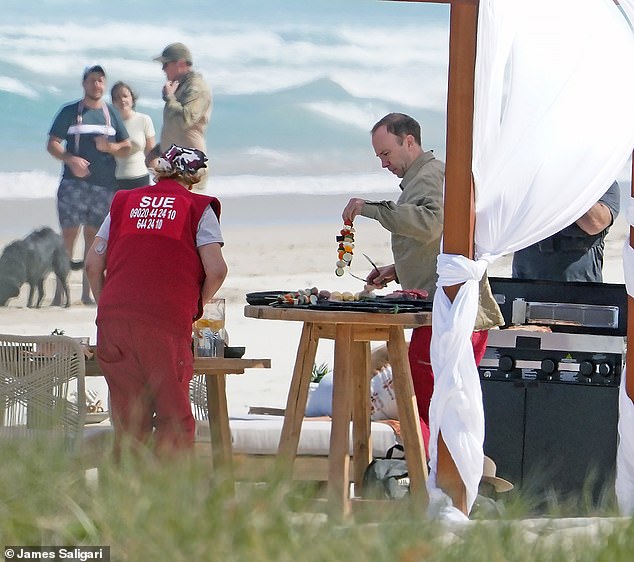 Nice kebabs: Matt was seen holding out his handiwork on the BBQ as he got stuck in 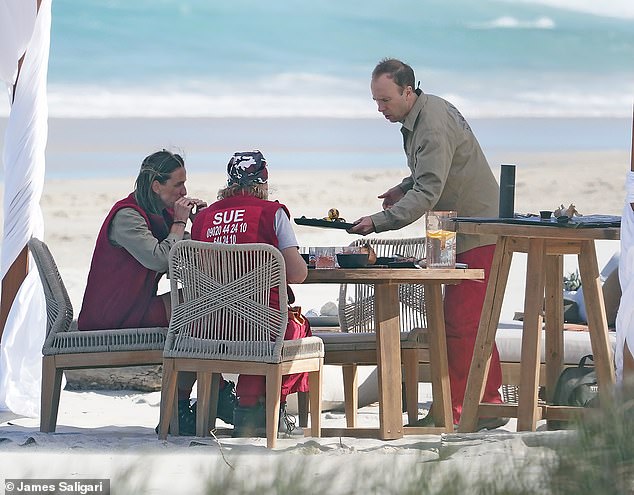 Matt Han-COOK! He was seen doing all the work as he dished up and handed out the food

A source close to the show previously addressed the fake set, explaining that certain things have to be built by hand, ‘because they don’t naturally occur where one would like them to.’

While the celebrities often are seen collecting wood for the campfire, this job is made easier for them.

The wood has been dried and chopped up in advance, then strewn over a wide area by TV crews so the stars can be sent to find it.

Sources close to the show explain that they can’t allow the celebrities to be let loose with an axe, and also need to protect the fauna and forest habitat. 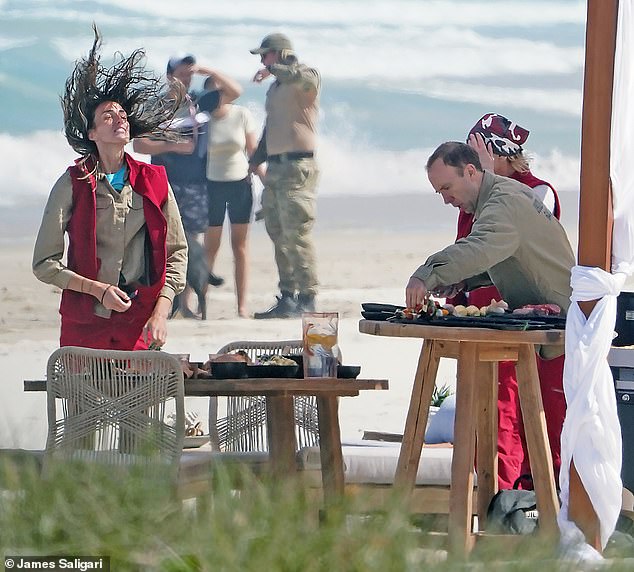 Getting into the groove: Jill was seen tossing her hair back before tucking into the spread 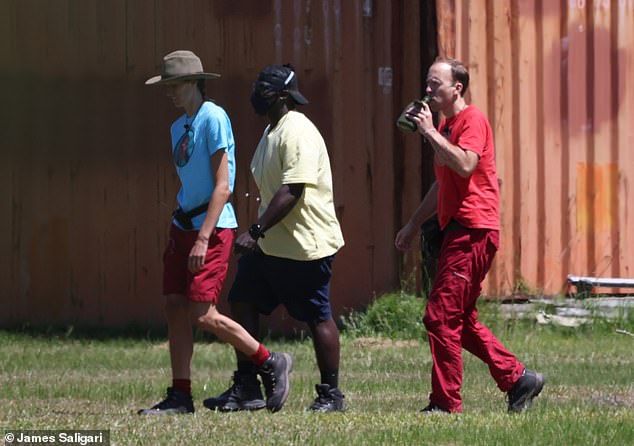 Keep hydrated: Matt was seen glugging from his water bottle as temperatures heated up 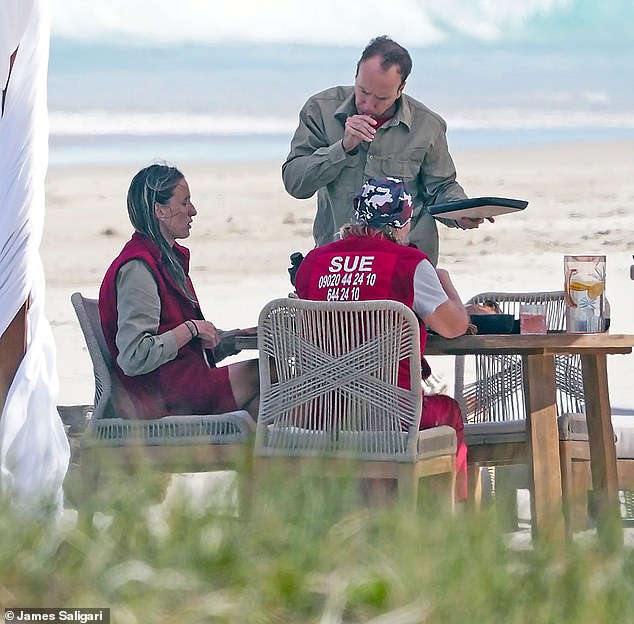 Licking his lips: Matt stood over the table as they demolished the dinner 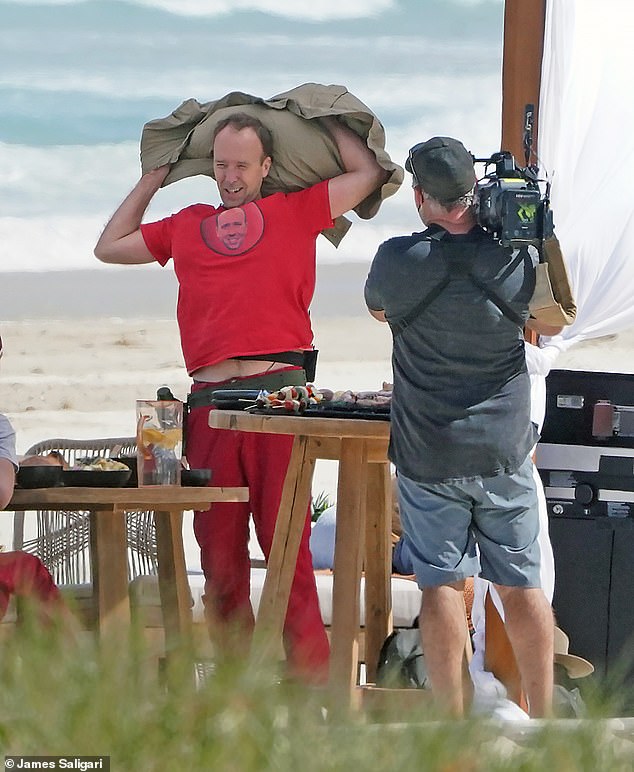 This is my moment: Matt was seen mixing up his look in front of a cameraman 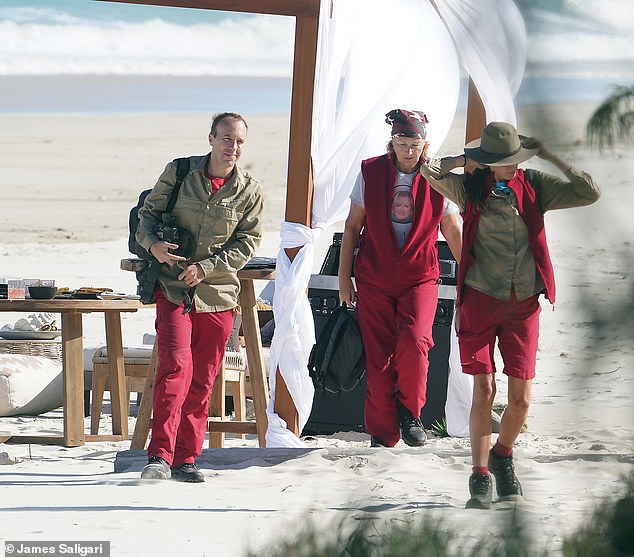 On their way: The group were all seen leaving at the end of their fun day and no doubt took the chopper back to camp

Meanwhile, the rain that the celebrities often complain about is less of a problem than it would appear.

There’s actually a retractable canopy 50 ft in the air above the camp, preventing the stars from getting soaked and keeping the campfire lit.

It has been decided that it would be unsafe to leave the celebrities in a rainy jungle without any shelter at all, not to mention make for bad TV.

It is however, not completely weather-proof nor does it cover the whole of camp, while it is said to leak if the rain is too heavy.

And a source insisted to The Daily Mail: ‘A lot of the camp is not under shelter — it’s not like the roof at Wimbledon!’ 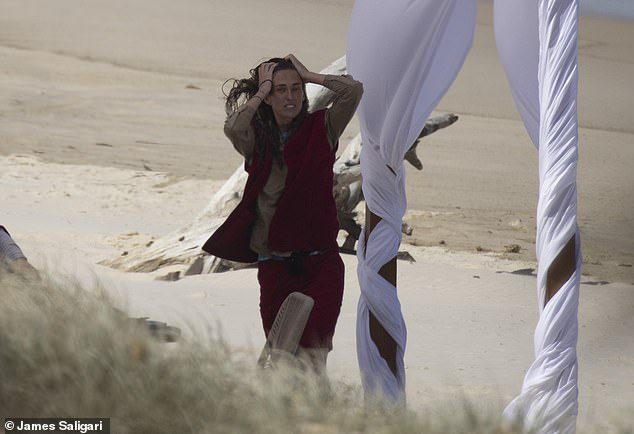 Blustery day? Jill was seen holding onto her locks as the wind picked up speed 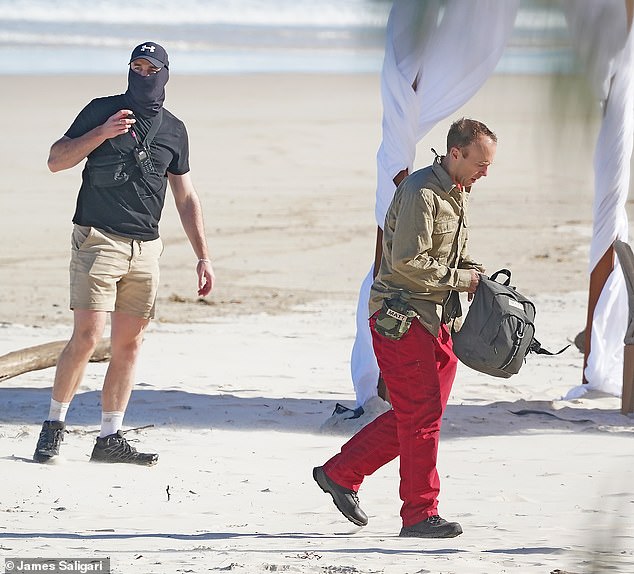 Taking no chances: Crew members were masked up in keeping with Covid protocols in the area 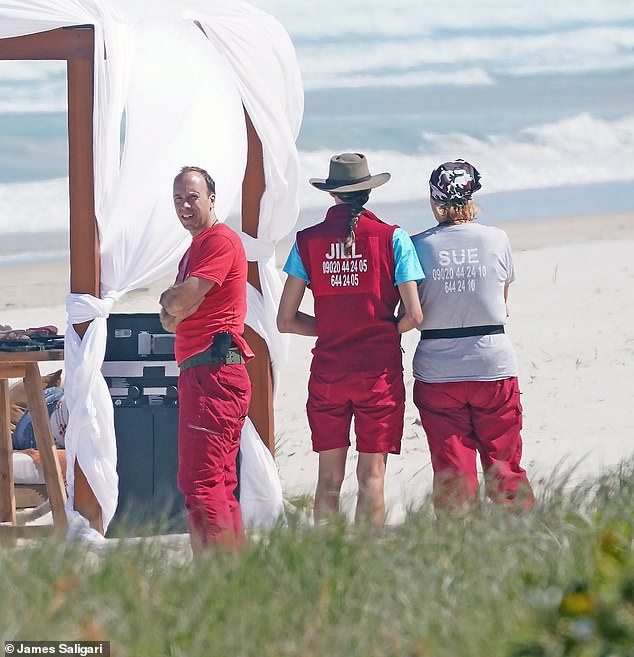 Topping up their tan: No doubt the jungle hasn’t been quite so sunny for them 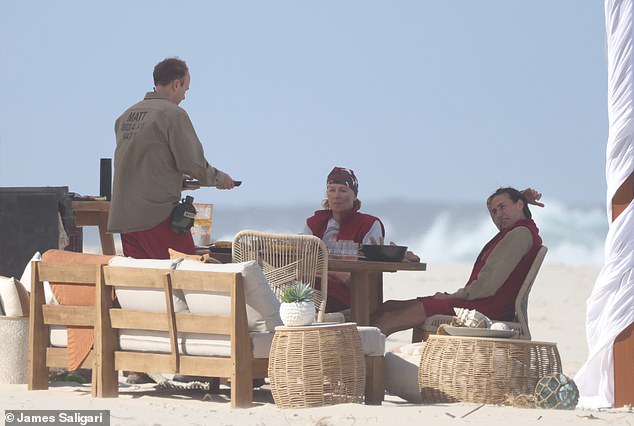 Loving life: They enjoyed a truly idyllic setting during their time off

Since 2016, there has also been a secret hidden cave built beside the shower in camp.

The private hideaway was used as Matt Hancock and Sean Walsh’s mole HQ when they were nominated to be the camp moles.

But its existence opens many possibilities for campmates, with producers suggesting the room can be used for illicit purposes.

Producer Oli Nash told The Mirror: ‘Next door is a secret cave which will be hidden behind a locked door. It will be used a number of times through out the series for our celebrities.

‘Inside it is just a plain cave with a bench but we will be using it through out the series for various events. The floors a bit hard – but it can be used for romance.’ 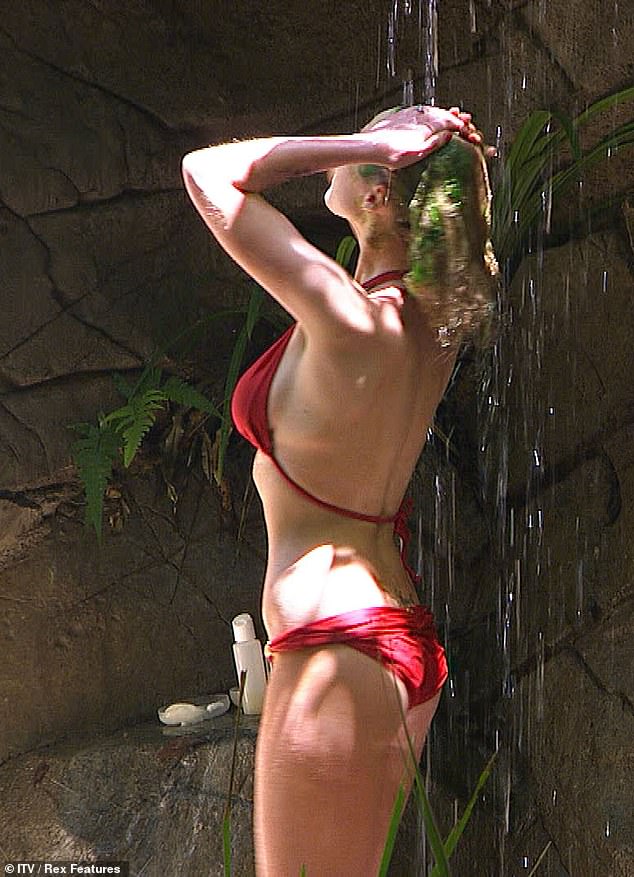 Man-made: Meanwhile, it has  been claimed the waterfall where the campmates shower is actually a man-made water feature that turns on and off (pictured Helen Flanagan) 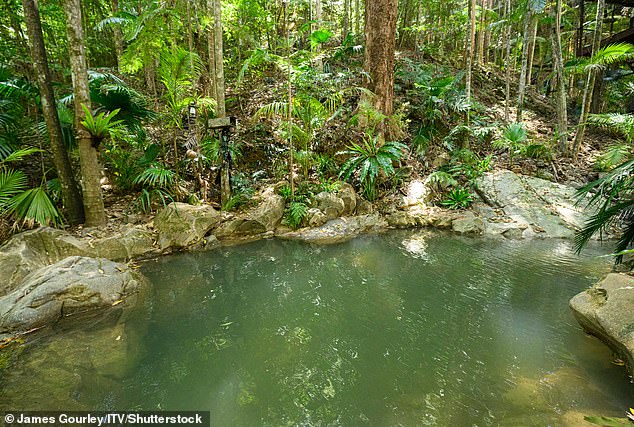 Reveal: In 2006, Lauren Booth revealed in the Daily Mail: ‘The waterfall, like the pool beneath it, was not part of the jungle at all, but a man-made creation’ 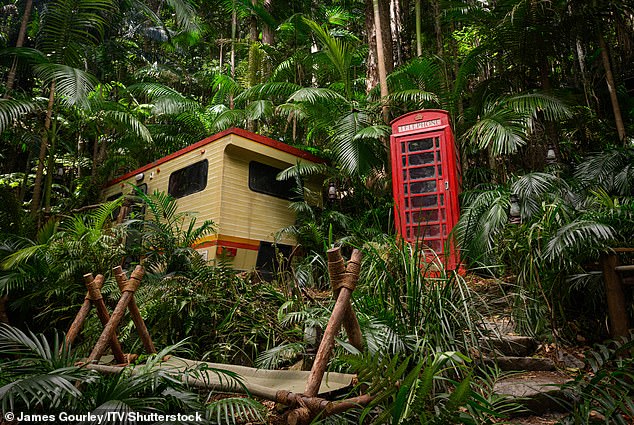 Fake: The same year it was also discovered by David Guest that the rocks dotted around camp were also false