Jennifer Aniston, 52, reveals she is so disciplined about her diet she can eat only ONE potato chip and walk away as she shares her ’15-15-15′ workout plan

Jennifer Aniston has an impressive figure that seems to only get better with age.

And in the September issue of InStyle, the 52-year-old actress revealed she has incredible will power who has mastered extreme moderation.

The Morning Show actress knows it is ‘annoying’ she has so much self-control when it comes to unhealthy foods and even if she’s opened a bag of potato chips to ease her feelings, she still shows restraint. 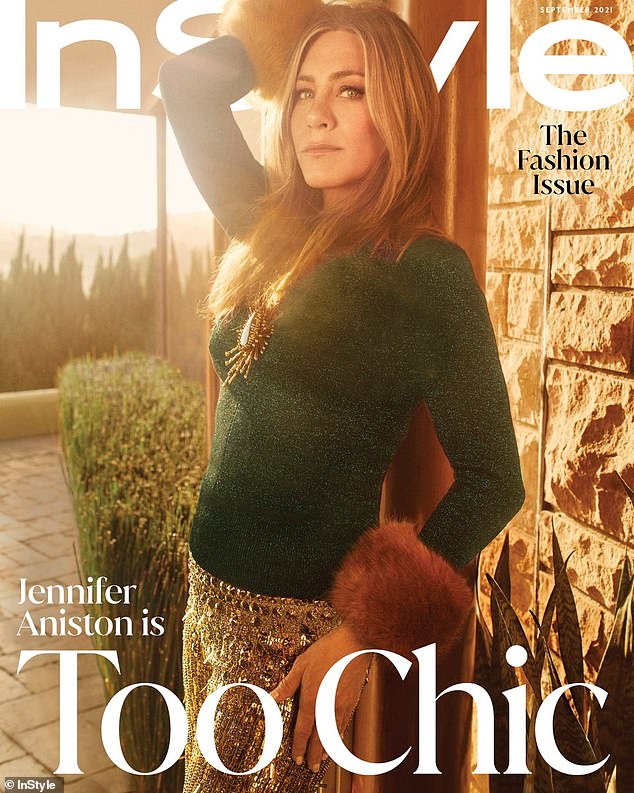 Impressive: Jennifer Aniston has an incredible figure that seems to only get better with age. And in the September issue of InStyle the 52-year-old actress revealed she has incredible will power who has mastered moderation

And then asked to clarify if she means just a single one, she confirmed: ‘Usually. I’m good at that. I can have one M&M, one chip. I know, that’s so annoying.’

And the star always drinks in moderation and is never tempted by ‘exotic’ cocktails.

Discussing her go-to drink, she told InStyle: ‘A margarita — clean, no sugar — or a dirty martini. I only have two to three drinks, tops, and I don’t do exotic. 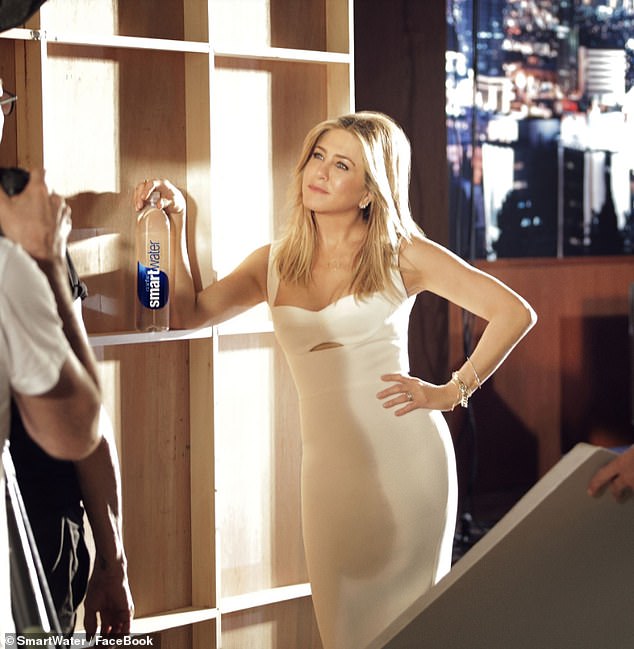 Slim: The Morning Show actress knows it is ‘annoying’ she has so much self-control when it comes to unhealthy foods and even if she’s opened a bag of potato chips to ease her feelings, she still shows restraint

‘When someone asks, “Would you like a cranberry-coconut-cucumber-spiced or hibiscus whatever?” No, I would not.

‘But when I moved into my house, a few people got me tequilas of the month as housewarming gifts. I have a cellar of all kinds of spirits — you could come here and probably order anything you wanted to.’

Aniston has a massive home in Bel-Air, California that she snapped up in 2012 for $21million.

As far as exercise, she has a method.

‘I had an injury last fall and I was only able to do Pilates, which I absolutely love. But I was missing that kind of sweat when you just go for it. I’m going back to my 15-15-15, which is a 15-minute spin, elliptical, run. And then just old school: I can chase myself around a gym. I need some kind of movement, even if it’s just 10 minutes a day on a trampoline.’

She also talked about which star ‘masters’ the red carpet every time.

‘J.Lo. I want to know what gives her the look like she’s about to be seething. It’s amazing. She’s almost stuck getting mad at somebody, but she’s just so gorgeous,’ shared the blonde bombshell.

She thinks Jennifer Lopez poses well! ‘I want to know what gives her the look like she’s about to be seething. It’s amazing. She’s almost stuck getting mad at somebody, but she’s just so gorgeous,’ shared the blonde bombshell. Lopez, left, seen in May

The Morning Show actress added: ‘She’s like, ‘I can’t believe I’m standing here.’ But I don’t think she’s trying; she fell out of bed that way. She’s a performer.’

Aniston and Lopez have never worked together but do appear to be pals as they have been seen chatting at events. And they are the exact same age: 52.

As far as her own red carpet performance, Jennifer said: ‘It depends on your stylist, because they go, ‘Never do this! Always do this!’ I’m like, ‘Well, that feels weird.’ I don’t know how to stand on a red carpet, but you do the best you can.’

And making friends on the carpet is important too: ‘I also try to connect with those people holding cameras. Some of them I’ve known a long time, so I’ll say hello. If I’m having an honest interaction with someone, it makes it easier.’

Aniston also touched on how different her path to fame was than girls like Britney Spears.

‘[They were] feeding on young, impressionable girls. Half of these kids started on The Mickey Mouse Club,’ said the Sherman Oaks, California native who studied in NYC.

‘I was lucky enough to be raised by a very strict mother. The priorities were not about becoming a famous person. It was, ‘Study your craft, learn what you’re doing, don’t just go out there and get lucky.”

Jennifer added: ‘I waitressed for years. I got a Bob’s Big Boy commercial on my 900th commercial audition. I was doing theater on, like, Long Island. 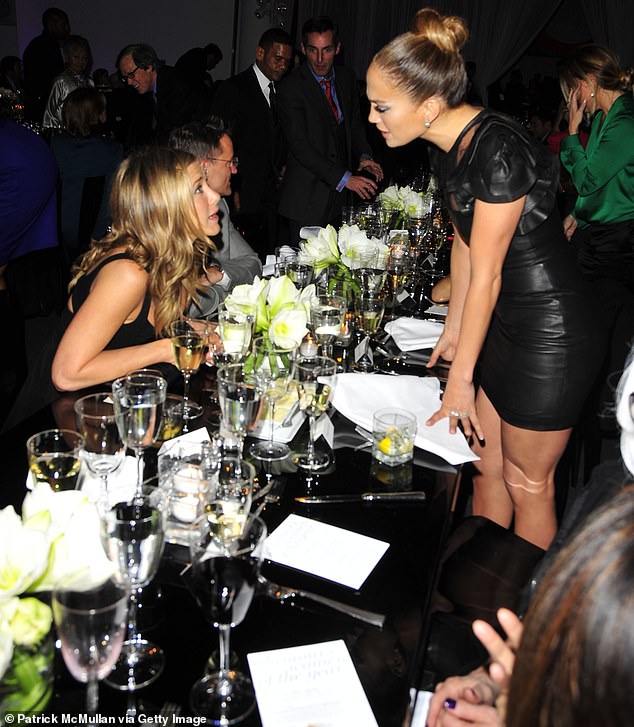 Howdy! Aniston and Lopez have never worked together but do appear to be pals as they have been seen chatting at events. Seen in 2011 in NYC

‘I think that [Spears’] group of girls as teens didn’t have any kind of ‘Who am I?’ They were being defined by this outside source. The media took advantage of that, capitalized on them, and it ultimately cost them their sanity. It’s so heartbreaking.’

The veteran then named the stars she thinks are ‘badass’: Gloria Steinem. Diane Keaton. Oprah. Women who have lived a life — their authentic life — without apologies.’

She also said that during lockdown she took a good look at her life and cleared out what did not work for her.

‘My level of anxiety has gone down by eliminating the unnecessary sort of fat in life that I had thought was necessary. Also realizing that you can’t please everybody. And what good does that do if you’re just little bits of yourself? Let’s try to be the full all of who we are so we can come to the table,’ said the Along Came Polly star.

While she loves acting, she is not thrilled with chatting up her work.

And she hinted that she does not love doing press rounds.

‘I call it the dog-and-pony show — traveling to do press junkets, red carpets, the shiny-penny things. Do people really need all that? The work is what I love to do. It’s the promotion of it that creates some stress in me.

‘You get, like, a second of what it is that you’re promoting, and then the rest of it is salacious crap that you somehow got wrangled into talking about. There’s a big appetite for that — and listen, I get it. But if you don’t give it, then they make it up.’

The star also touched on how Friends changed her life.

‘It’s not just out there in the ether or on a television set you’ve passed by, but in our actual bodies — our DNA, our bloodstream, our cells. It was a unicorn of an experience. For whatever reason, we were all at the right place at the right time, and we created something that landed its little flag on a lot of people’s hearts around the world.

And Aniston also admitted she has seen SNL spoofs of her character Rachel Green.

‘Vanessa Bayer on Saturday Night Live. I remember someone saying, ‘Did you see the impression of you on SNL?’ My first response was, ‘What? No, I’m not impression [-worthy].’ They played it for me and [gasps], ‘That is so not the way I sound.’

‘Then I was like, ‘Uh, oh. Oh, I see.’ Everyone said it was a compliment, but I had to really get my brain around that and tuck my little tail between my legs, thinking I’m being made fun of. That’s always the gut instinct: ‘They’re making fun of me.” 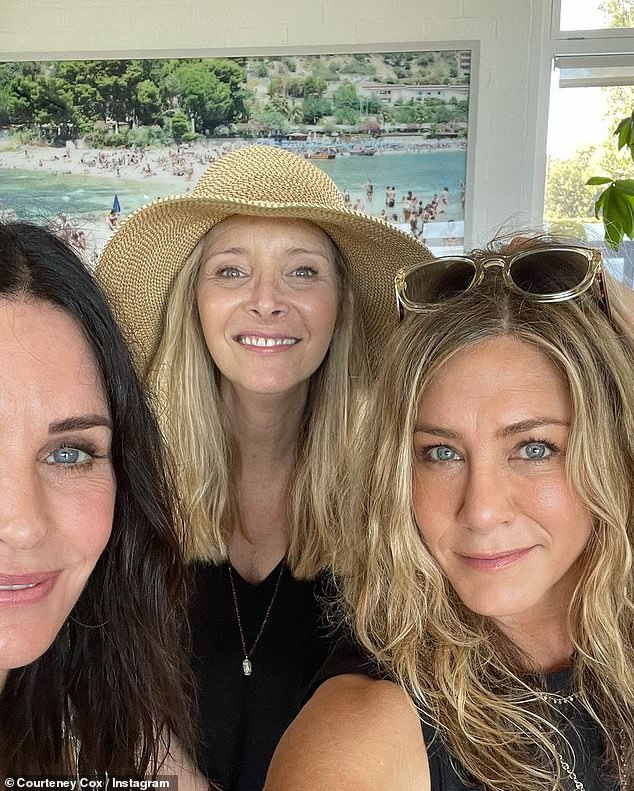 She talked Friends too: Aniston said, ‘It was a unicorn of an experience. For whatever reason, we were all at the right place at the right time.’ Seen with Lisa Kudrow and Courteney Cox