Jennifer Lawrence is makeup-free as she models a huge white NIGHTGOWN during a breakfast break on the set of Red, White And Water in New Orleans

Jennifer Lawrence was seen starting her morning off with a nourishing breakfast on the set of her new film Red, White And Water on Thursday.

The 30-year-old Hunger Games star donned an oversized white nightgown and a pair of Adidas slides as she made a stop at craft services before getting her hair and makeup done.

She has been on the set of the Lila Neugebauer-directed film in New Orleans for the last few weeks, and the film also stars Samira Wiley (Handmaid’s Tale) and Brian Tyree Henry (Atlanta). 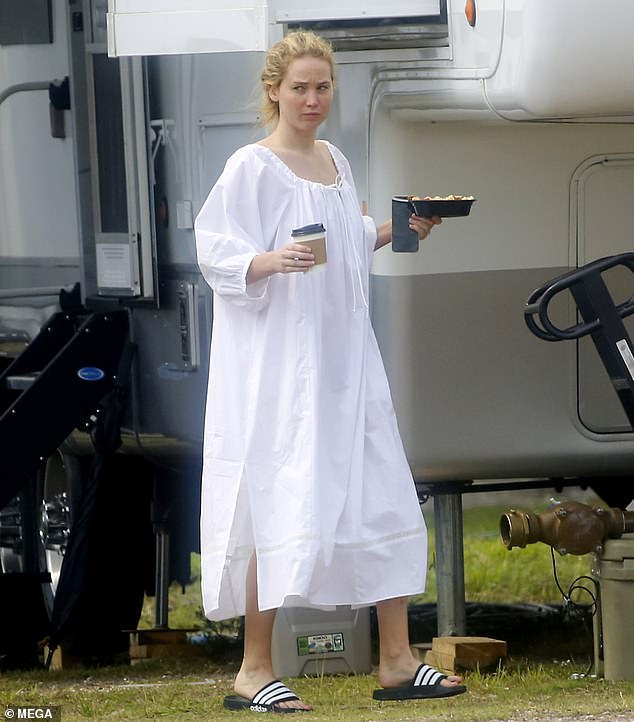 Early start: Jennifer Lawrence, 30, was seen making a stop at craft services to get breakfast on the set of her new film Red, White and Water in New Orleans on Thursday

Lawrence looked a bit sleepy for her early morning call time but was seen fueling up with coffee and a to-go container of food.

Her hair was tied back in a messy bun and she dressed for the humidity in a flowing white dress and sandals.

The Silver Linings Playbook star made her way by a bevy of star wagons before entering her trailer for hair and makeup. 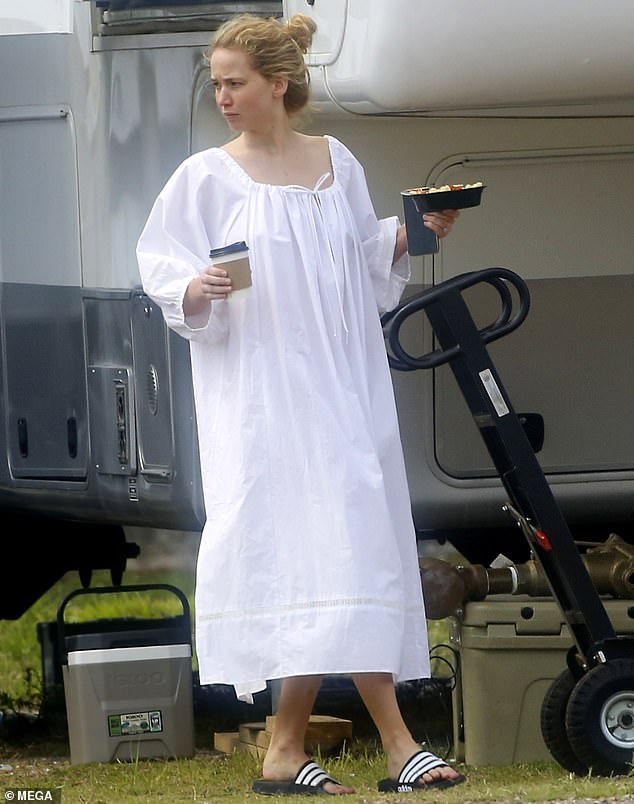 Glam: The Hunger Games star was seen heading to her trailer to begin hair and makeup preparations ahead of shooting 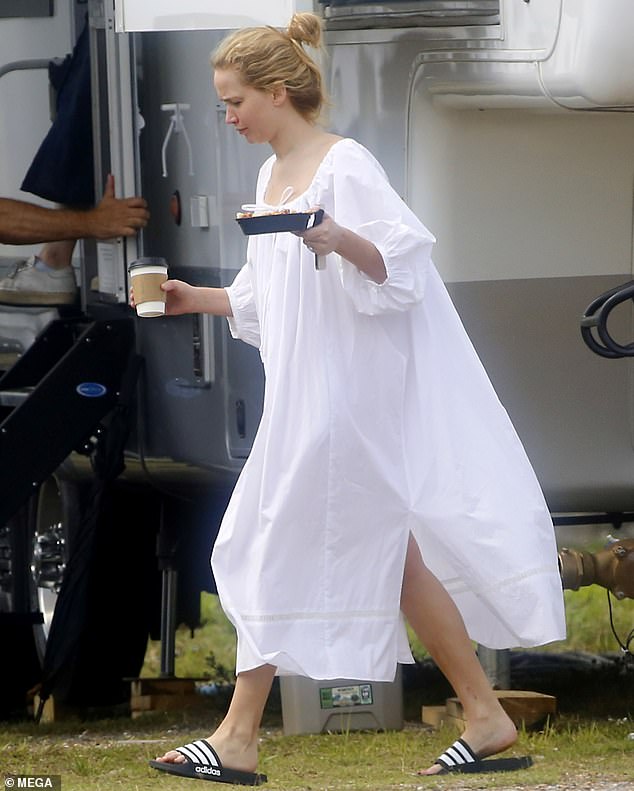 Humid mornings: She dressed for the humidity as she donned a flowing white nightgown and a pair of adidas slides

The upcoming film tells the story of a US soldier who struggles to adjust to life at home after suffering a traumatic brain injury during the fight in Afghanistan.

Lawrence herself suffered an eye injury on the set of the star-studded disaster comedy Don’t Look Up in February, after being hit by debris during a planned stunt.

In the film she stars opposite Leonardo DiCaprio as an astronomer tasked with warning mankind that a comet is set to destroy earth. She has not been seen on set since the February accident. 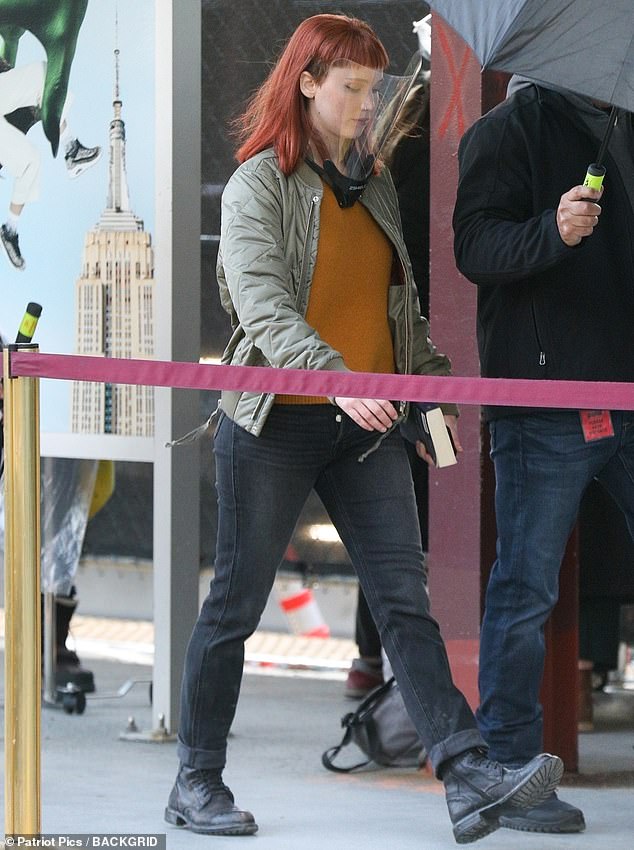 Set injury: While on the set of star-studded disaster comedy Don’t Look Up in February, Lawrence suffered an eye injury after being hit by debris during a stunt; pictured December 2020

On a recent off-day from shooting Red, White And Water she was joined by husband Cooke Maroney where the two were seen exploring the city together.

The pair predominantly reside in New York City together and got married in October 2019 after getting engaged the February prior.

She had previously referred to the gallerist as ‘the greatest human being I’ve ever met,’ in a podcast interview and the relationship continues to burn strong. 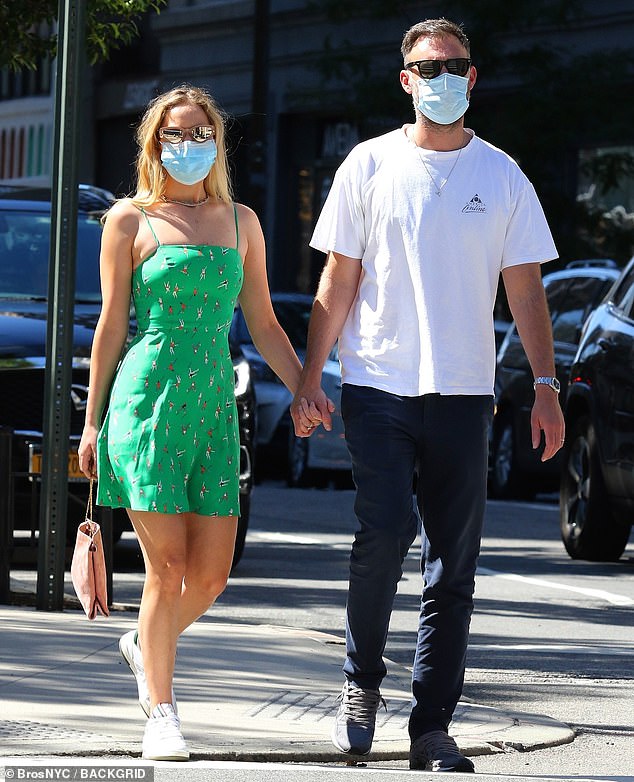 Lovebirds: Lawrence married NYC gallerist Maroney in 2019 after being linked the year before; pictured September 2020