Katie Price confirms she is BACK on with fiancé Carl Woods

Katie Price confirms she is BACK with fiancé Carl Woods by sharing a selfie of her on-off fiancé.. hours after she was seen wearing engagement ring

Kate Price confirmed that she is back on with her fiancé Carl Woods as she shared a selfie of her on-off beau to her Instagram on Friday – hours after she was seen wearing her engagement ring.

The former glamour model, 43, and the former Love Island star, 32, who were rumored to have split last month, recently returned from a holiday together, fueling speculation that they were back on.

Katie had previously been spotted without her diamond ring but showcased the sparkler once more as she took to her Story and posted his selfie on her grid. 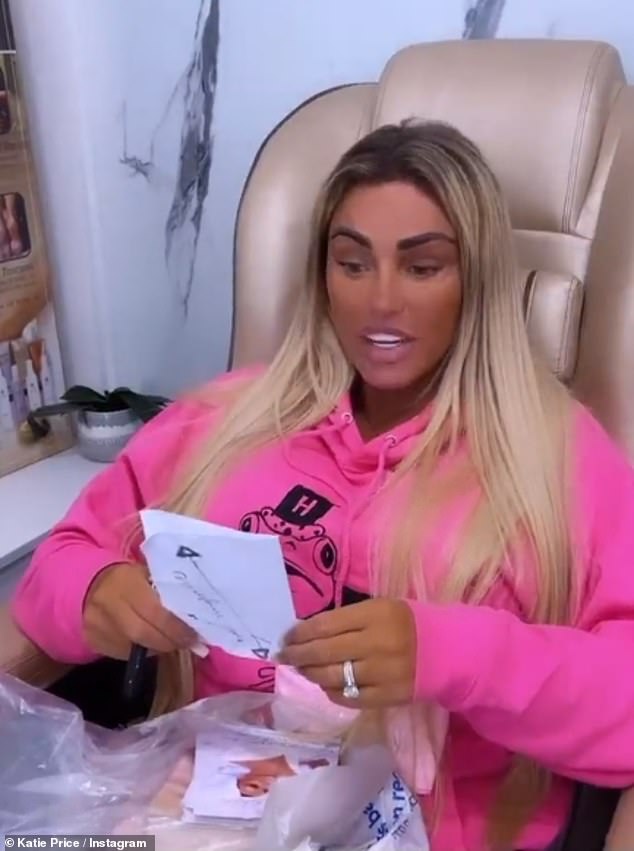 Sporting her ring! Katie Price, 43, confirmed that she is BACK on with fiancé Carl Woods as she shared a selfie of her on-again off-again beau to her Instagram on Friday

Alongside the new photo of Carl, Katie penned: ‘Yesssss clothing range ready set go,’ as he donned a T-shirt from her line.

Just hours before, Katie showcased the huge ring as she promoted tickets to her makeup masterclass on the Story.

Donning a bright pink tracksuit she read off a piece of paper, ensuring that the ring was in full view. 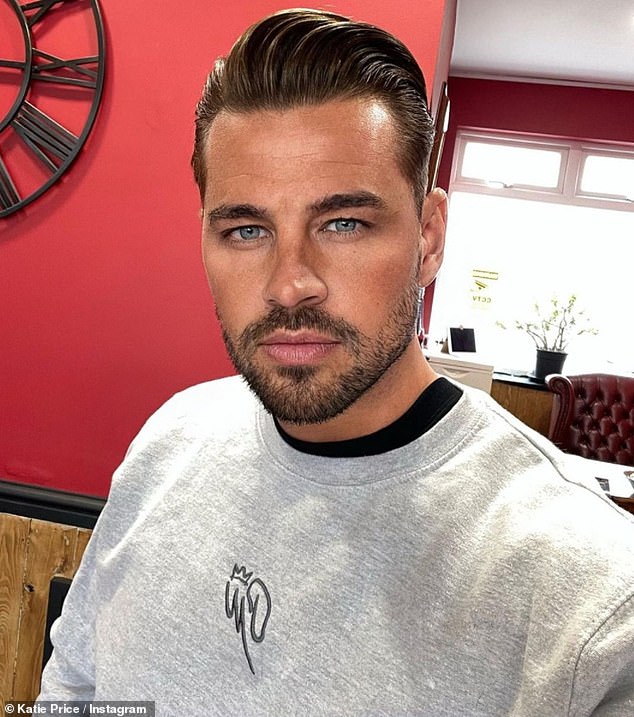 Going strong: Katie posted his selfie on her grid as he donned a T-shirt from her clothing line

Katie’s post comes after she jetted off to Spain with Carl to stay in a bargain £101 a night hotel, The Melia in Alicante.

The recent getaway has fuelled mounting speculation that Katie and Carl were back together after they were spotted in Gatwick airport holdings hands last Friday.

Carl has since tried to distance himself from split rumours as he took to his Instagram Stories earlier in the week, telling his followers: ‘Engagement ring on and off – it’s all b*******!’, alluding to snaps of her without her sparkler. 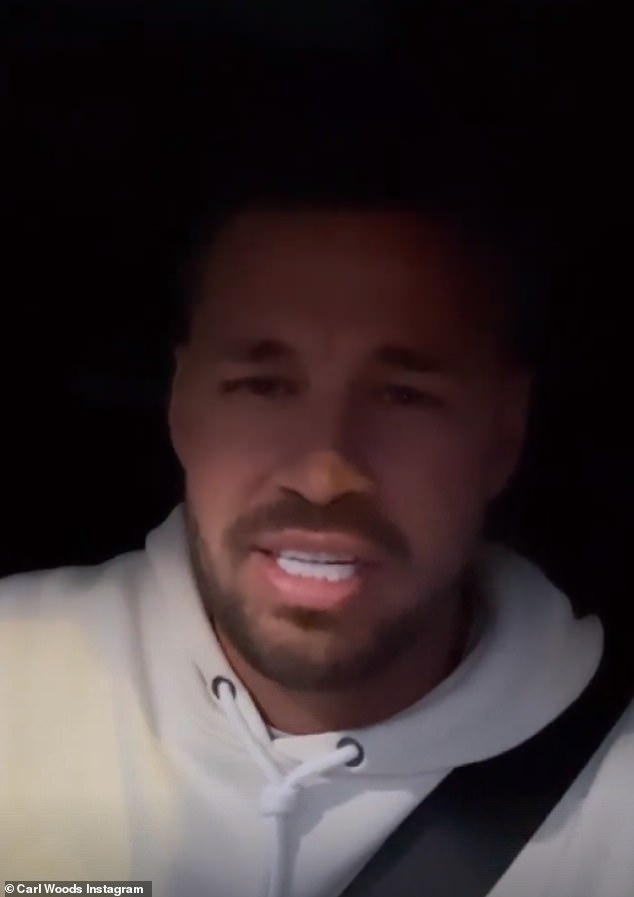 ‘Don’t involve me!’ It comes after Carl tried to distance himself split rumours, as the pair were seen on holiday together over Easter

Carl insisted he ‘didn’t want to be involved’ in the speculation about their relationship status, just days after it appeared they were back on by jetting off on their Easter break.

Katie flashed her diamond ring on Instagram last week, before removing in it shots of her at a friend’s London stables after returning from their trip.

Addressing reports, Carl said: ‘I wanted to come on here and clear this up, engagement ring on and off – it’s all b*******.

‘They’re so muggy. I’m not involved in it, please nobody tarnish me with the same brush. I think it’s ridiculous – that’s all I’ve got to stay on it.’ 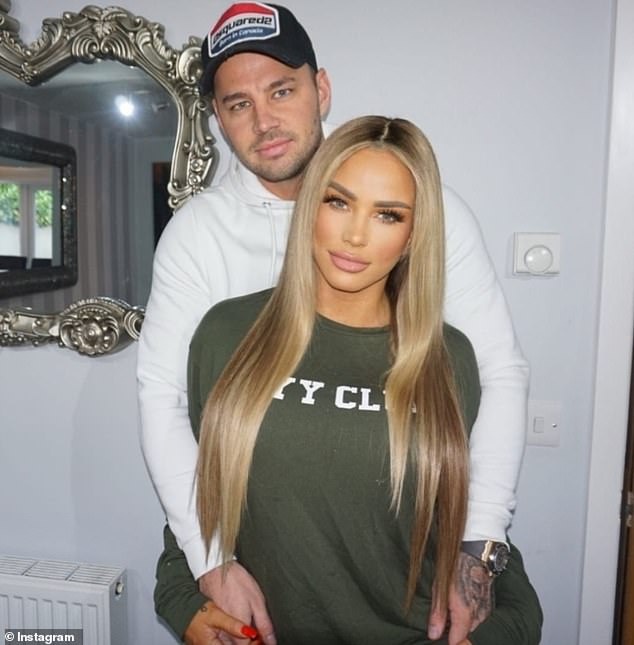 All off? The the one-time Love Island contestant insisted he ‘didn’t want to be involved’ in the speculation about their relationship status 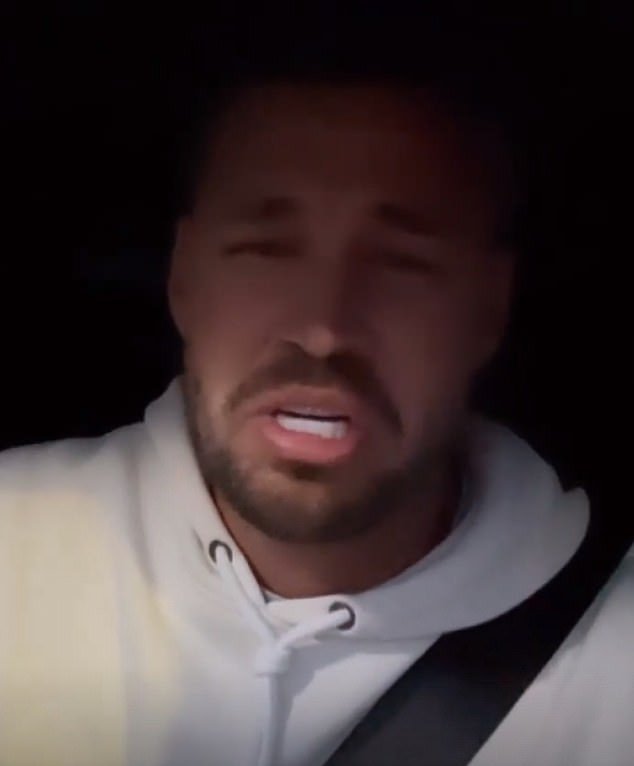 Carl’s statement comes amid mounting speculation that the couple were back on track after jetting off on a secret getaway together.

Katie teased their reunion by sharing a sneak peek at the tropical location in a recent Instagram post.

Posting on Sunday, the star, revealed a glimpse of palm trees and a luxury restaurant as she wished her followers a Happy Easter.

Katie shared a photo of a Piña colada before beaming into the camera, telling her fans: ‘Happy Easter everyone, hope you have a fantastic day!’ 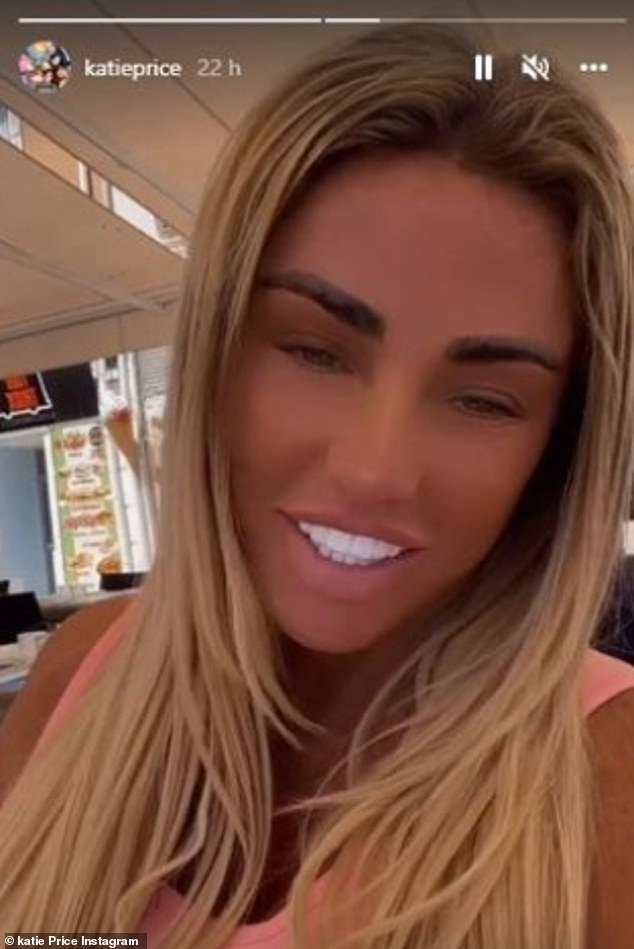 Wish you were here: Katie jetted off on a secret Easter getaway with Carl, sharing a peek at the beautiful location in a new Instagram post

The couple, who called off their engagement last month, were seen casually strolling side-by-side as they prepared to jet away together for the Easter break.

Carl later took to Instagram to share a snap where he tagged the location as Gatwick Airport, penning the caption: ‘Catch Flights.’

MailOnline contacted representatives for Carl and Katie for comment at the time.

A week before they jetted off Katie was picked up by her ex fiancé after a hair salon appointment.

Former Celebrity Big Brother winner Katie shared footage of herself sitting in her ex’s Porsche as she showed off her new hair, and flashed a look at her huge diamond engagement ring which was firmly back on.

The leather embossed seats of Carl’s distinctive car could be seen in the background of Katie’s selfies. 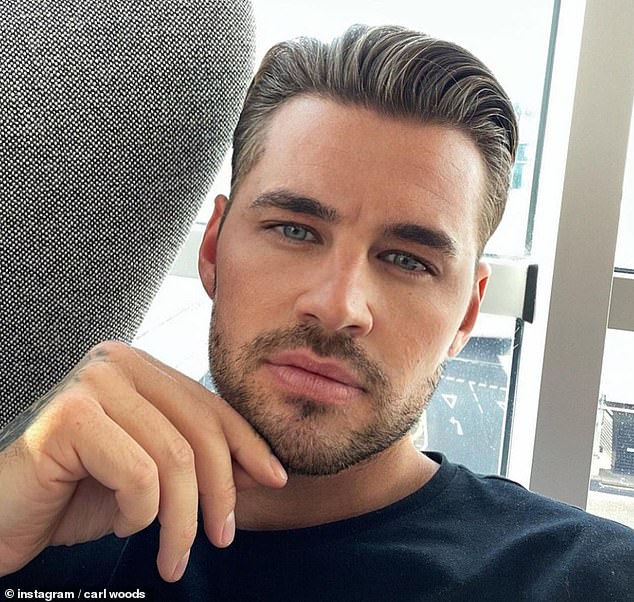 Where is he going? Carl later took to Instagram to share a snap where he tagged the location as Gatwick Airport, penning the caption: ‘Catch Flights’ 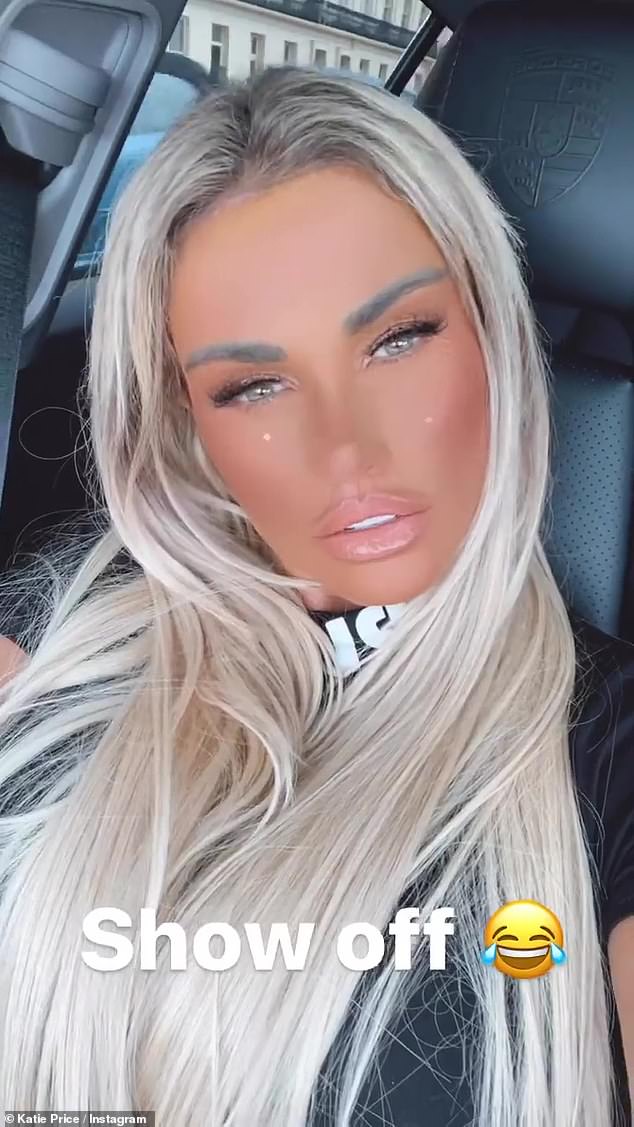 Rekindled: A week before they jetted off Katie was picked up by her ex fiancé after a hair salon appointment. The leather seats of Carl’s car could be seen in the background of Katie’s selfies 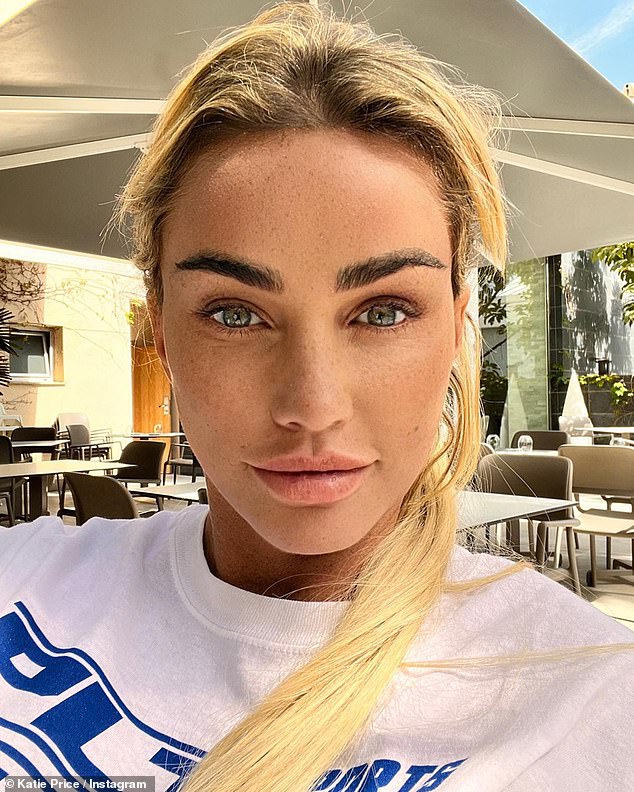 Sharing: She also shared a pretty natural looking selfie while on her break away – although she did seem to have a filter applied

She captioned the footage ‘show off’ with a laughing, crying emoji as Carl drove her home.

A second clip saw the star showing off her manicure, with her huge diamond engagement ring from Carl back on her wedding finger.

Hours earlier the star had uploaded a snap of herself in the hairdresser’s chair while having a blow dry with the ring noticeably absent in the mirror selfie.

The reality star’s social media activity came just hours after her ex liked one of her Instagram photograph, in another telling sign that the two could be back together. 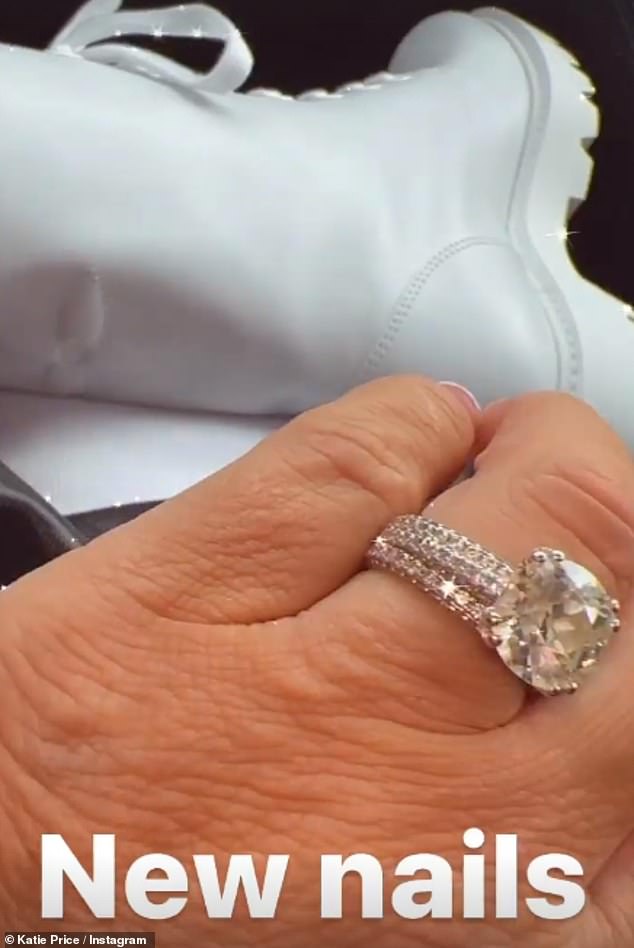 Ring: A second clip saw the star showing off her manicure, with her huge diamond engagement ring from Carl back on her wedding finger

The star told how she was ‘feeling natural and happy today’ in the post which her former fiancé liked, in a sign that tensions between them may have calmed down, after he deleted all snaps of them from his Instagram..

Carl previously allegedly accused Katie of cheating twice and reportedly ended his 11-month engagement to her as he could no longer trust her.

Just a day earlier Katie and her ex-Kris Boyson, 34, were spotted at the same romantic hotel days apart – sparking speculation they have rekindled their relationship.

The mother-of-five shared images from inside The Copper Crib in Sussex on her Instagram story last Tuesday while Kris posted matching photos from the same luxury getaway a week later. 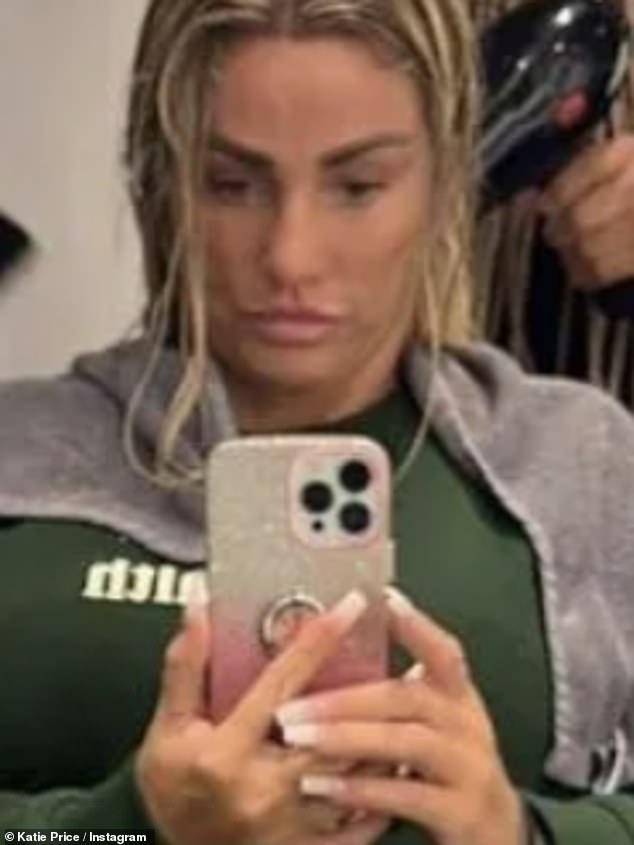 Bling-free: Her enormous diamond engagement ring from Carl was noticeably absent from her wedding finger in a previous mirror selfie

Former glamour model Katie, whose engagement to Carl ended abruptly following claims she sent flirty messages to ex-Kris from her daughter’s Instagram profile, said she was at the Secret Cabins venue with son Harvey.

A source said: ‘Carl will be really upset about this – he had his suspicions about Katie and Kris, which ultimately ended their relationship.

‘If they stayed in the same hotel so soon after his split from Katie then it’s a real low blow and the fact they have posted pictures on social media makes it even more disrespectful because they clearly want people to know.’

A friend close to Kris told MailOnline: ‘It’s just a coincidence that Katie and Kris stayed at The Copper Crib within the same week.

‘Kris was there with another woman who he’s not ready to go public with and isn’t interested in getting back with Katie. Their relationship is in the past for him now.’

Katie’s engagement to former Love Island contestant Carl ended after she was accused of cheating and sending flirtatious messages to Kris last year.

The TV personality regularly spoke about marrying Carl and having his children while they came close to eloping in Vegas last November.

Carl had been charged under Section 4 of the Public Order Act following an incident at his home in Little Canfield, Essex last year.

Colchester Magistrates’ Court was told the charge followed an argument that spilled over into the street, disturbing neighbours.

At one stage Carl was seen trying to force open a door, the court heard.

Carl was arrested after Katie was allegedly punched in face on August 22, 2021.

The reality star is set to face trial after denying the charges and if found guilty could be sentenced to a maximum of six months in prison. 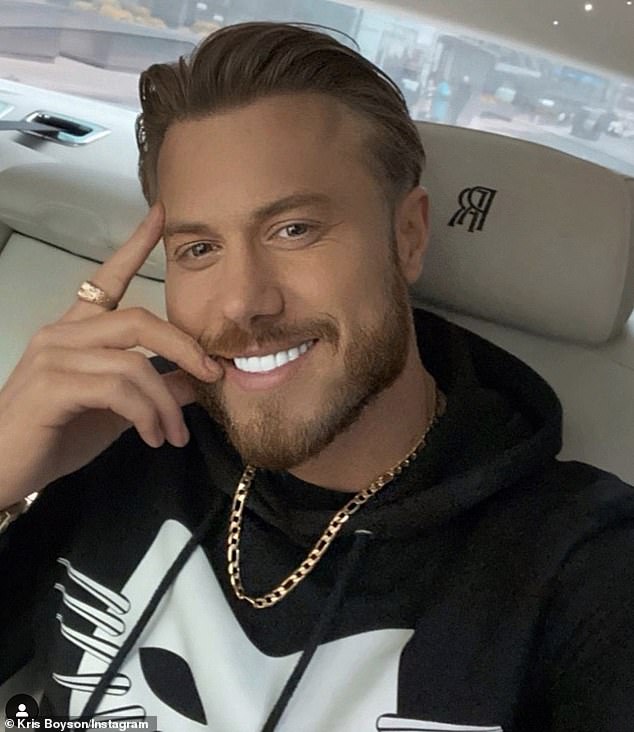 ‘Disrespectful’: Katie and her ex-Kris Boyson were spotted at the same romantic hotel days apart – sparking speculation they had rekindled their relationship