Kim Kardashian enjoyed a late night pizza date with boyfriend Pete Davidson on Thursday night, after the premiere of her new Hulu show The Kardashians in Hollywood.

But the pair were not alone as they enjoyed company from sister Kourtney and her fiancé Travis Barker, and a group of pals as they arrived at Jon & Vinny’s Italian restaurant in LA.

‘Late nite snack,’ Kim wrote on her Instagram Stories, tagging her clique Jonathan Cheban, Tracy Romulus, Kourtney, Travis and others who were along for the ride. 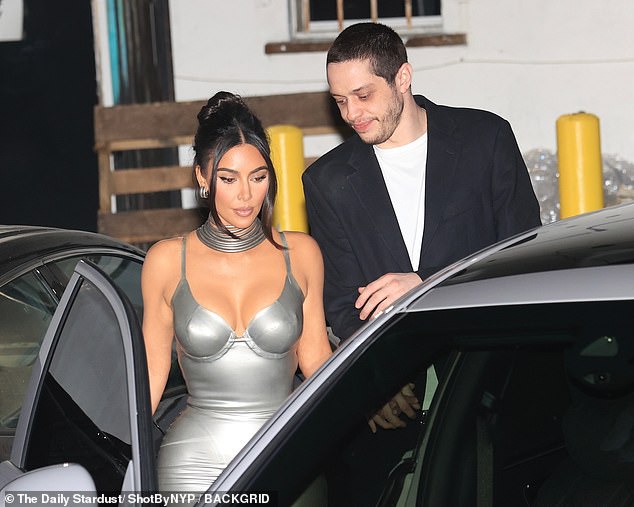 It’s not the first time Kim and Pete have snapped at the popular Italian eatery – and judging by her Stories, there were lots of favored menu items ordered.

As well as an array of pizzas, the reality star showed off dessert plates of ice cream and cookies, having built up an appetite at the fancy premiere across town.

Despite the late night binge, Kim looked flawless as she squeezed her curves into a skintight Thierry Mugler metallic ensemble.

Kourtney and Travis continued their love tour as they were seen holding hands at all times on their way out of the restaurant. 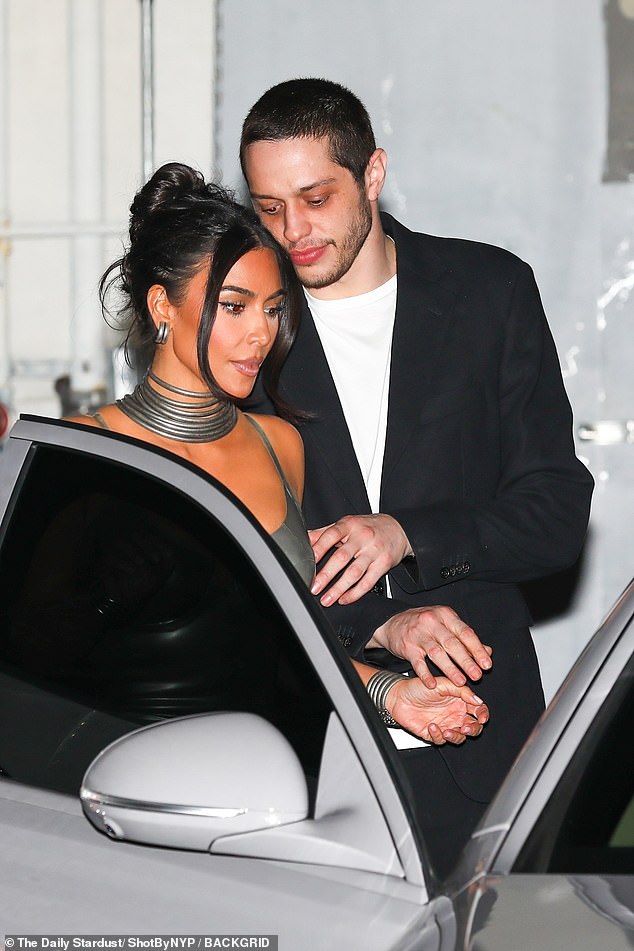 Close:  Their relationship appears to be going from strength to strength 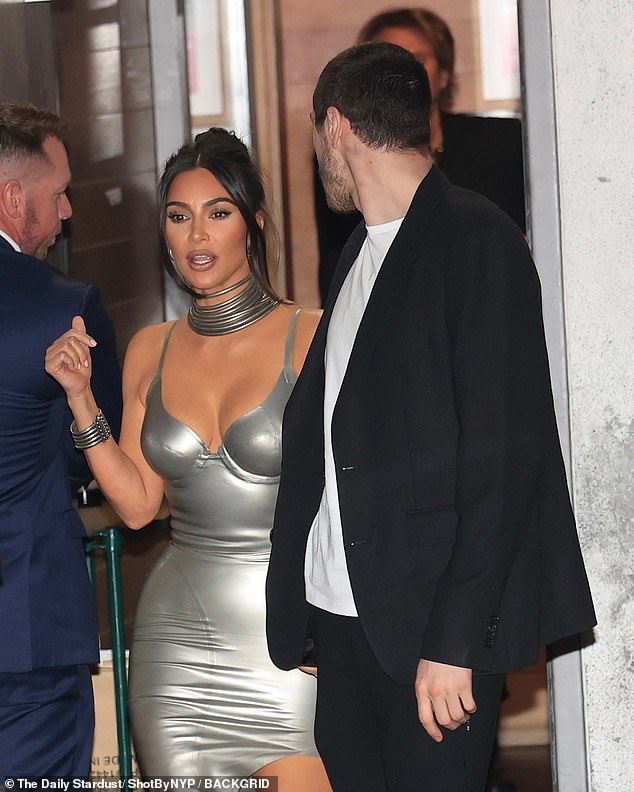 Wow: Despite the late night binge, Kim looked flawless as she squeezed her curves into a skintight Thierry Mugler metallic ensemble 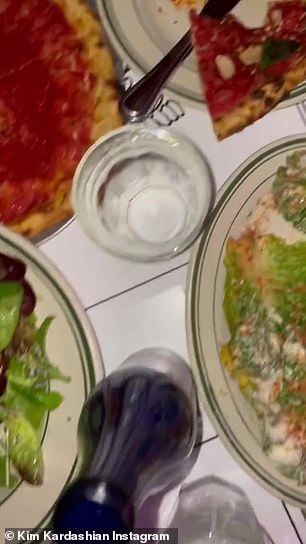 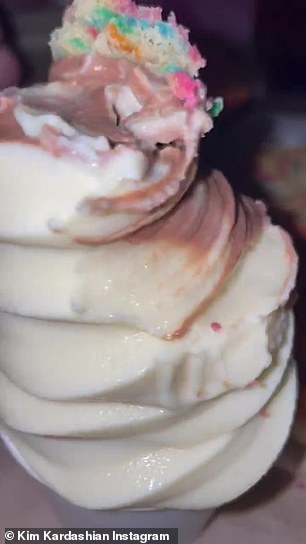 Travis had brought along his whole family for the event, including Landon, 18, Alabama, 16, from his previous marriage to Shanna Moakler, and former step-daughter, 23, whose father is Oscar De La Hoya.

At the event, Kourtney accessorised her look with a thick, silver chain-link necklace and added a small pop of colour with red fingernail polish.

Meanwhile, the Blink-182 drummer looked dapper in a black suit while donning a pair of charcoal sunglasses for the Addams Family affair. 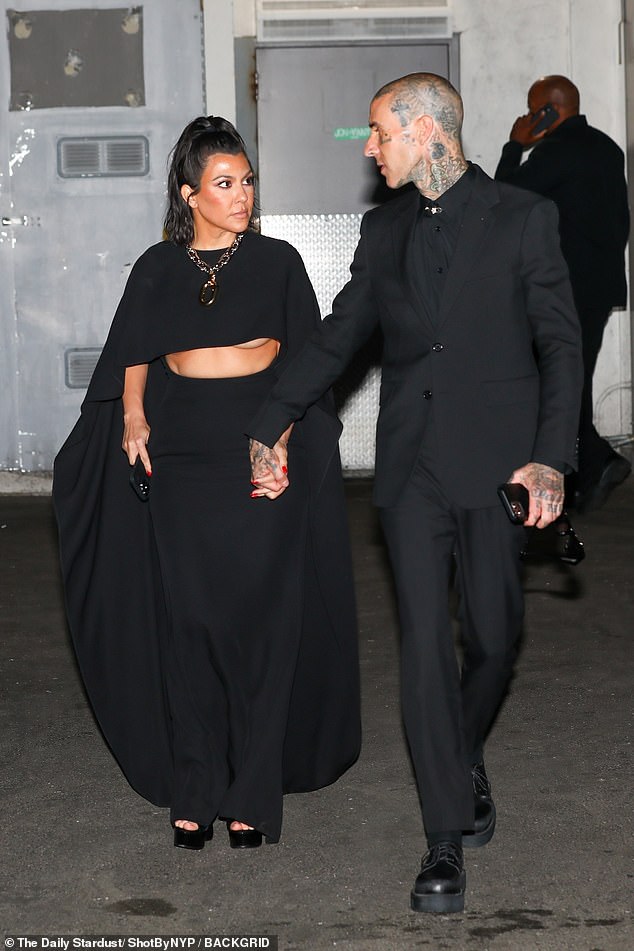 PDA: Meanwhile Kourtney Kardashian and her fiancé Travis Barker held hands as they left through the backdoor of the establishment 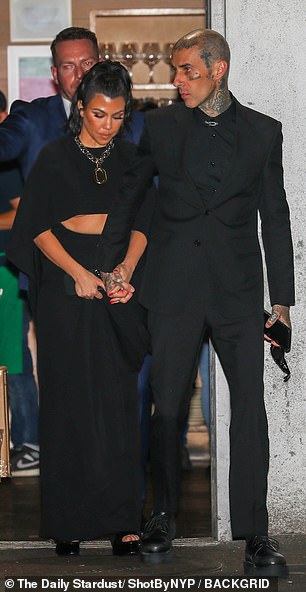 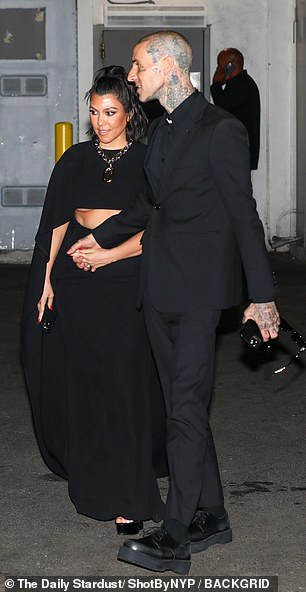 Lovers: Kourtney and Travis held hands after attending the star-studded event together 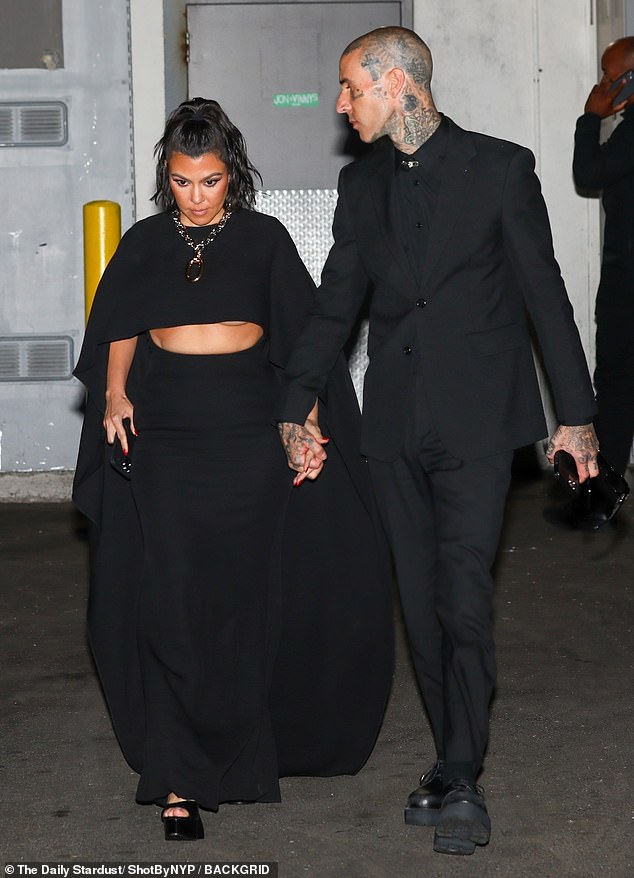 VIPs: The glam couple were spotted leaving out of the back entrance 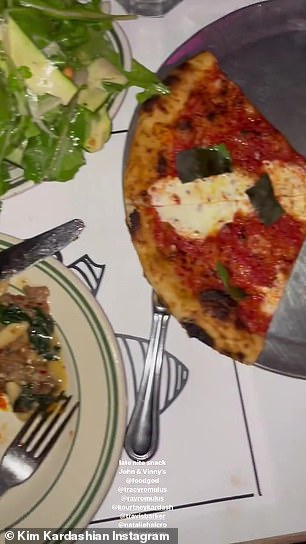 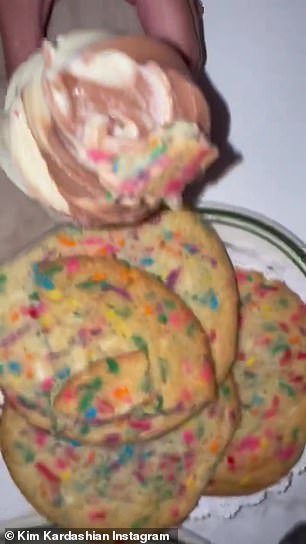 Yum: The group were certainly not shy when it came to ordering off the menu

Meanwhile, Kim told E! that SNL funnyman Pete had been ‘so supportive’ of her at the premiere.

Explaining why Pete skipped the red carpet, she said: ‘I don’t think it’s his thing to be all up here with me. So, I’m just so happy he’s here.’ 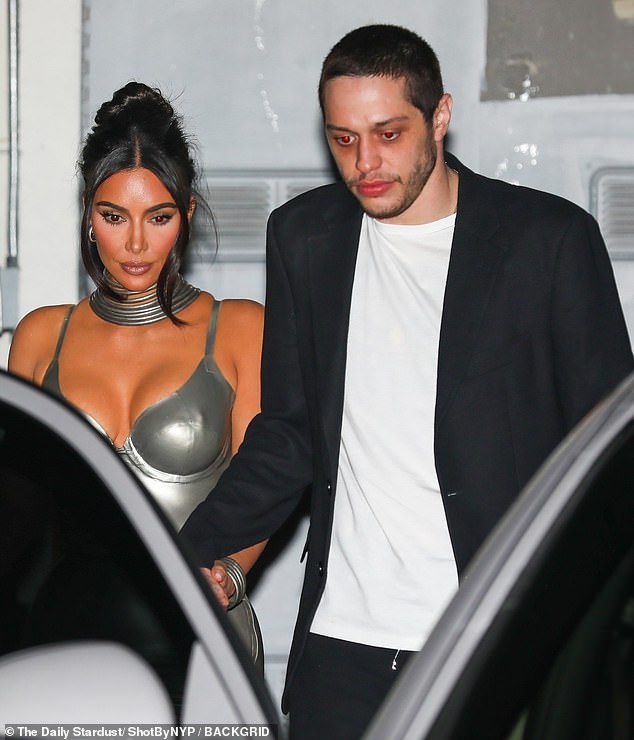 Romance: Kim will be sharing more details about her love life on the new show 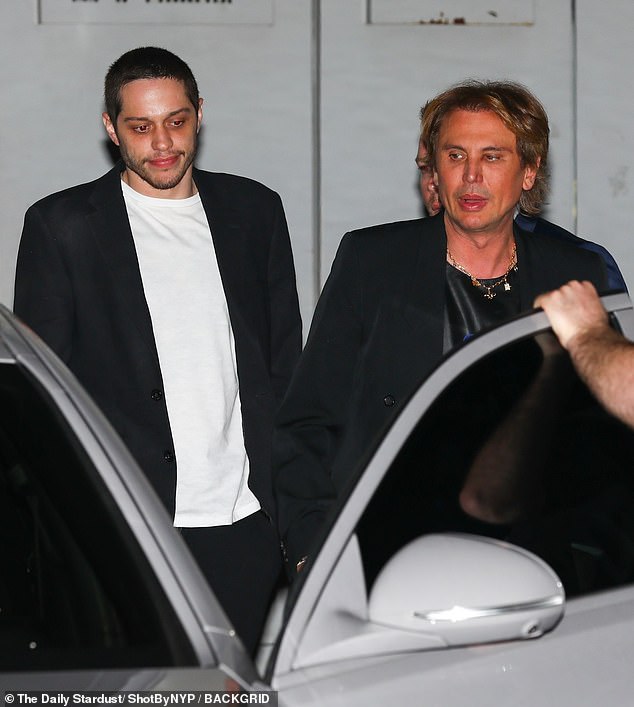 Make room for Foodgod! Kim’s pal Jonathan Cheban was also along for the ride 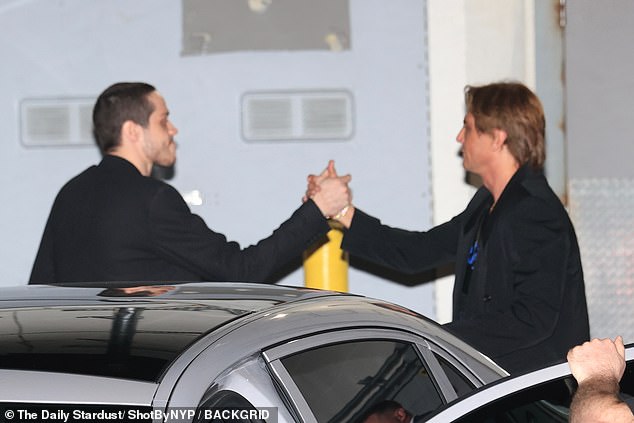 Bros: He appears to have given Kim’s new man his seal of approval 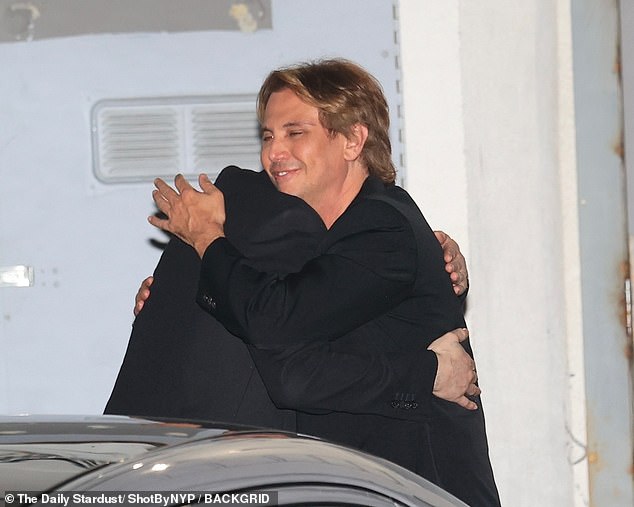 Hugging it out: Pete and Jonathan share an embrace after their late night snack

At the event, Pete was spotted watching Kim from the sidelines as she did the rounds of press to promote the show.

He then accompanied her inside to watch the first episode of the show and sat with Khloe, Kourtney and Travis Barker – proving that he’s well and truly in with the family.

Pete got gussied up for the evening by throwing on a classic black blazer and matching trousers. 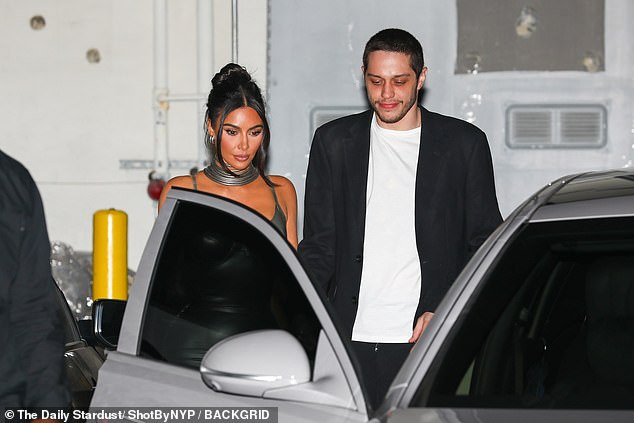 Off they go: Kim and Pete were seen leaving together

French exit: The pair were seen sneaking off at the rear entrance to avoid any crowds 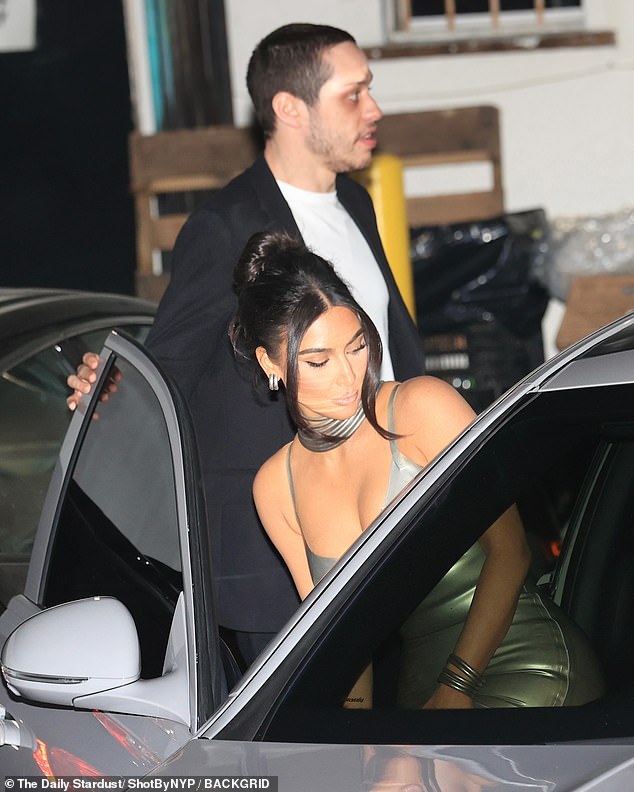 Gent: Pete held the door for Kim as they made their way out of the restaurant 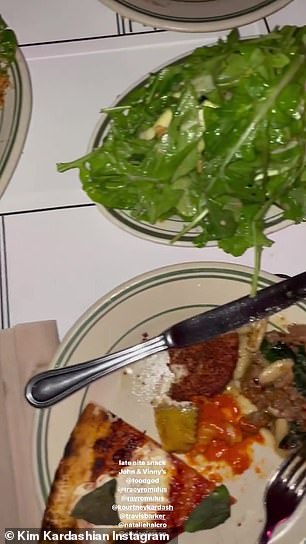 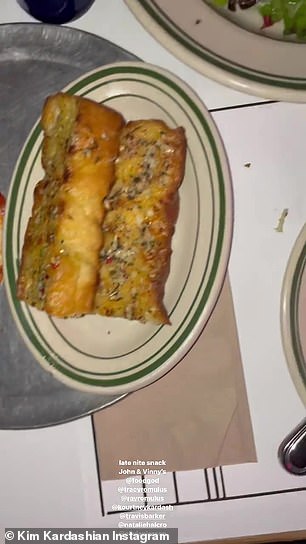 Balanced diet: As well as stodgy items like pizza and garlic break, the group also ordered some salads for the table 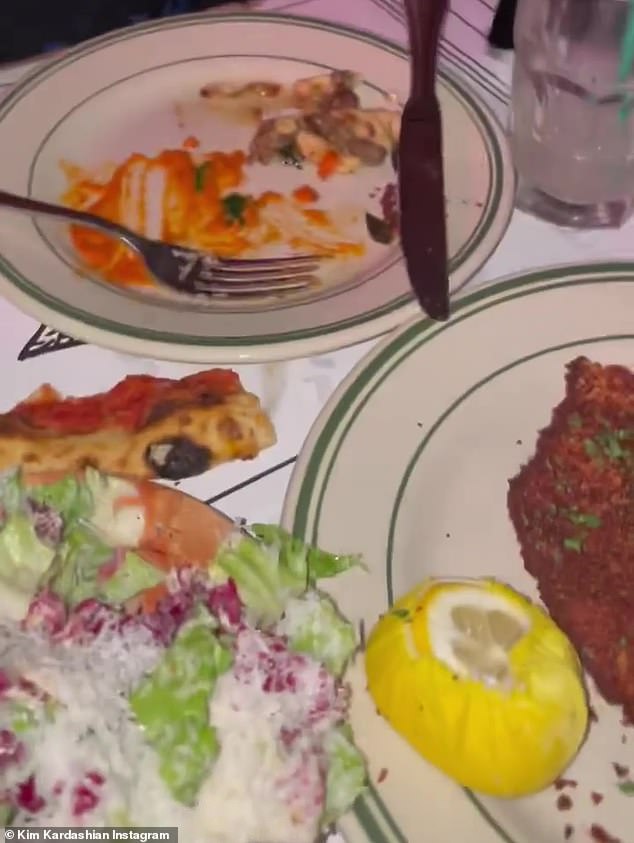 Feasting: Kim shared her night out with fans on Thursday

Giving his look some edge, Pete opted for a plain white tee instead of a traditional button-down shirt.

The new reality series looks set to detail the romance as it charts the past year of Kim’s live, including her stint on SNL where they met and reportedly fell for one another.

Earlier on in the night, Kim showed off her stunning dress, which clung to her curves, boasted one open side to allow her toned pins to be on display.

The SKIMs founder accessorised with silver bangles and a matching choker, while her raven tresses were styled into a chic up-do.

In 2019 Kim famously wore an iconic ‘wet-look’ Thierry Mugler gown to the Met Ball, when he came out of retirement to dress her. The French designer died aged 73 in January from ‘natural causes.’ 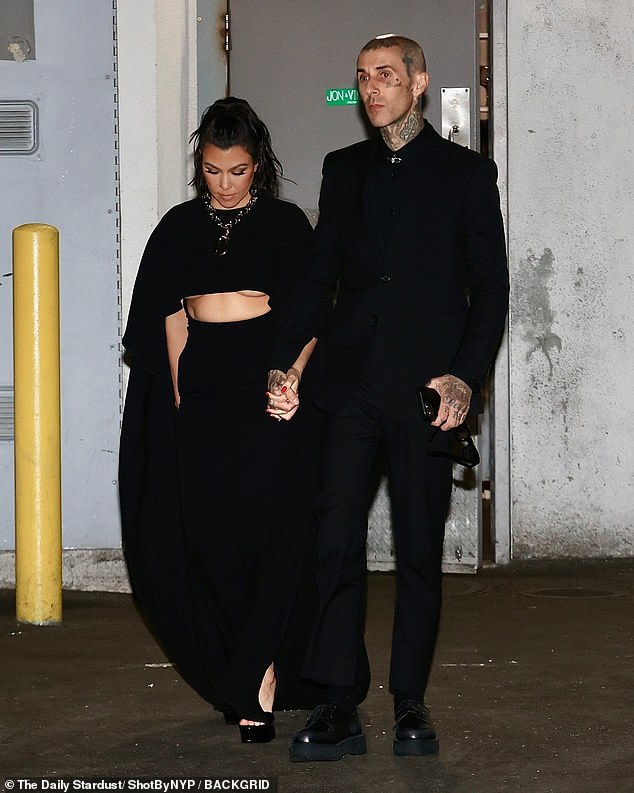 Superstar couple: The love story of Kourtney and Travis will be shown in the new series