Madonna turns 64! The singer French kisses TWO women in the back of a car as she celebrates in Italy: ‘Birthday kisses with my side b**ches’

Iconic singer Madonna – who made the singles Holiday, Like A Virgin and Frozen massive hits – turned 64-years-old on Tuesday.

The Michigan-born blonde took to Instagram to share a video with her 18.4million followers as she danced in a blue and white summer dress while enjoying a vacation in Sicily, Italy.

‘Birthday kisses with my side b**ches,’ wrote the Dick Tracy actress in her caption as she could be seen French kissing two women in the back of a car. Her manager Guy Oseary was also present. 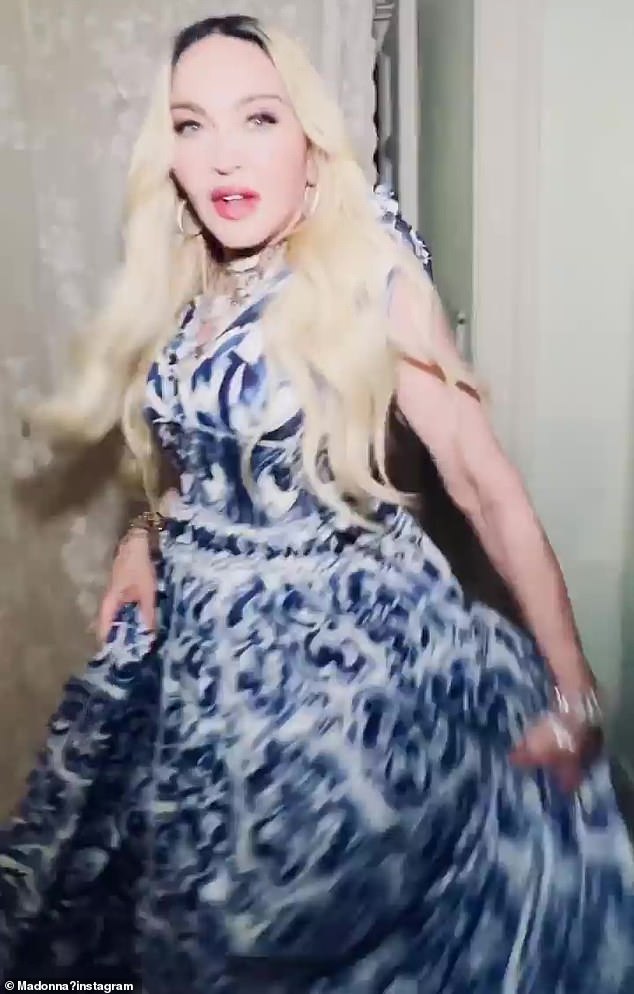 Happy 64 Madge! Iconic singer Madonna – who made the singles Holiday and Like A Virgin massive hits – turned 64-years-old on Tuesday 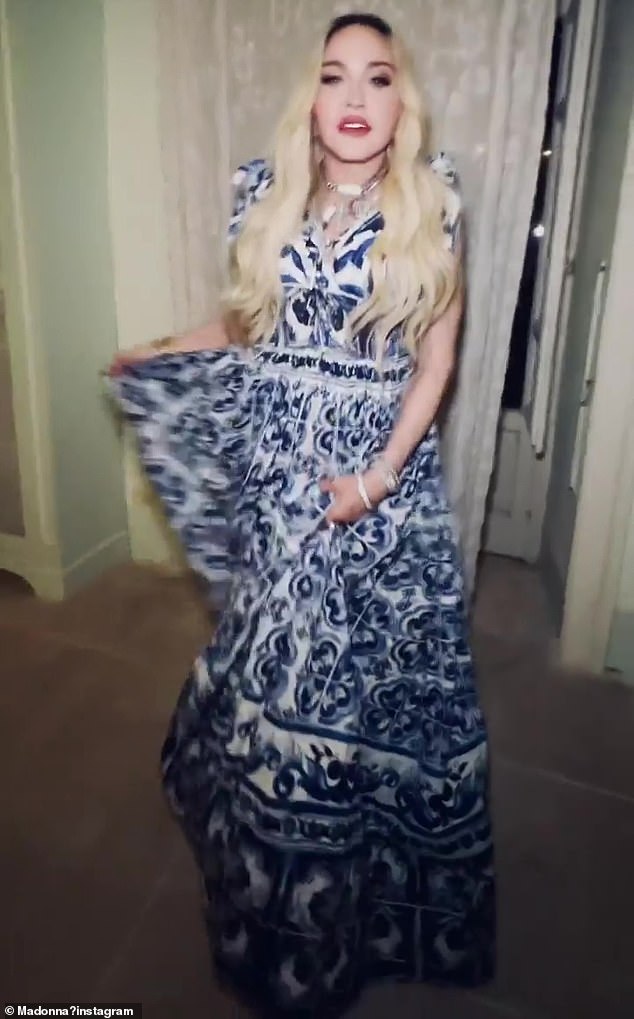 Pretty as a picture: The Michigan-born blonde took to Instagram to share a video with her 18.4million followers as she danced in a blue and white summer dress while enjoying a vacation in Sicily, Italy with her children

The chart-topping siren had her white blonde hair down as she was heavily made up. The blue and white dress flattered her slim frame as she was seen outside a home.

Earlier she had shared a video of her family enjoying a meal al fresco in Sicily with son Rocco – whose father is Guy Ritchie – getting a chocolate cake delivered to him.

This comes the day after Madonna posted a series of racy snaps and asked her fans to send her birthday presents. 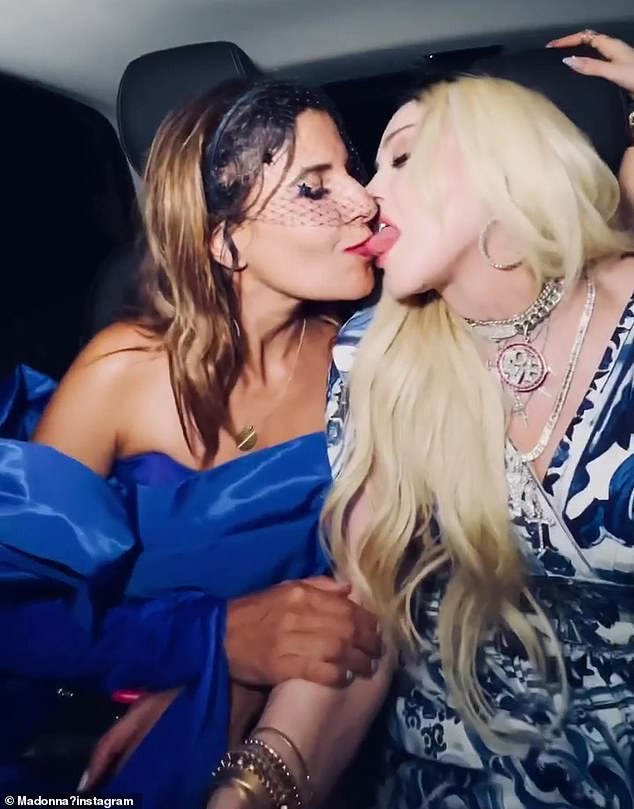 She loves the ladies: ‘Birthday kisses with my side bitches,’ wrote the Dick Tracy actress in her caption as she could be seen French kissing two women in the back of a car. First she smooched this woman in blue 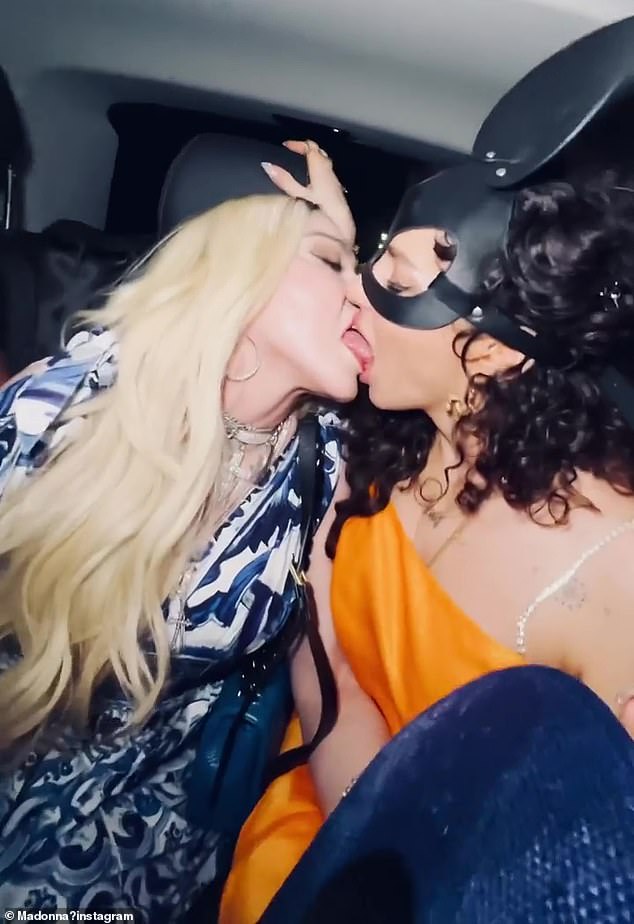 She loves to shock her fans, but is this still shocking? And then Madonna kissed a woman in an orange dress 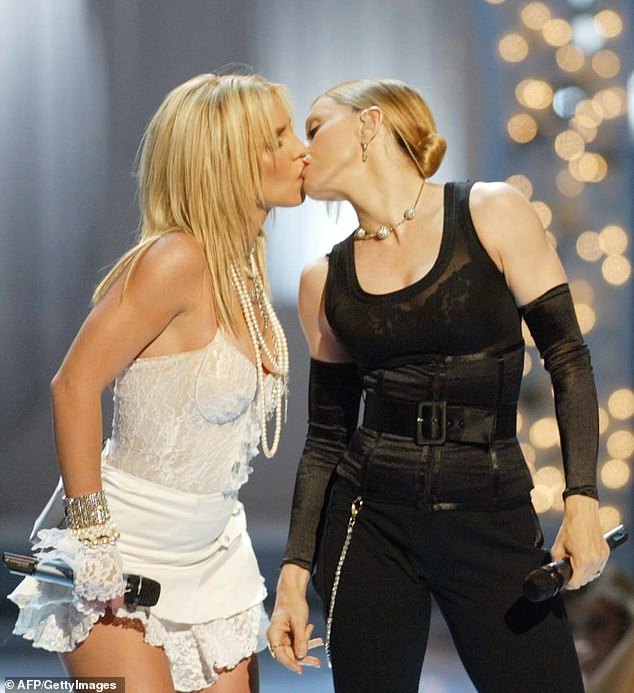 Deja vu! The crooner sent shockwaves around the globe when she kissed Britney Spears in 2003 at the MTV Video Music Awards at Radio City Music Hall in NYC

The Queen of Pop celebrated early by giving followers some eye-popping content.

The Vogue hitmaker posted a close-up of her chest in a black lacy bra with diamond chains around her neck, one of her leg over a banister in killer stilettos, and another saw her bent over kneeling on the floor with her booty taking the limelight.

Meanwhile, Madonna recently explained why she was determined to make her upcoming biopic herself because ‘misogynistic men’ were trying to make movies about her. 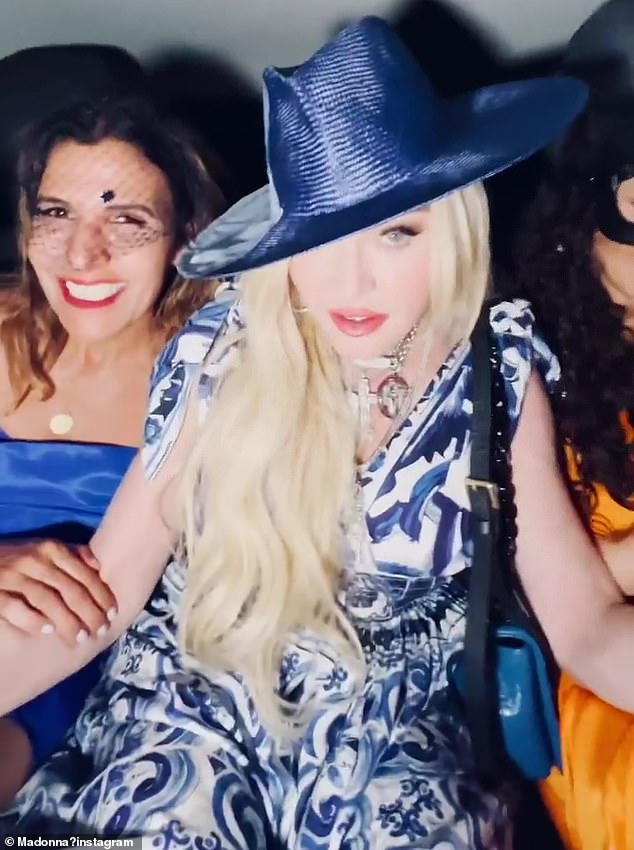 Ga pal power: Madonna put her hands on both ladies as they were seen in a car

The Lucky Star singer – who releases the 50-song remix LP Finally Enough Love: 50 Number Ones on Friday – said she was ‘hacking off my limbs’ working on the flick about her life and career.

She told Variety: ‘I’ve been whittling away at it, but it’s like hacking off my limbs.’

It was reported that ‘Inventing Anna’ star Julia Garner, 28, is to play the Material Girl hitmaker, though nothing is confirmed yet. 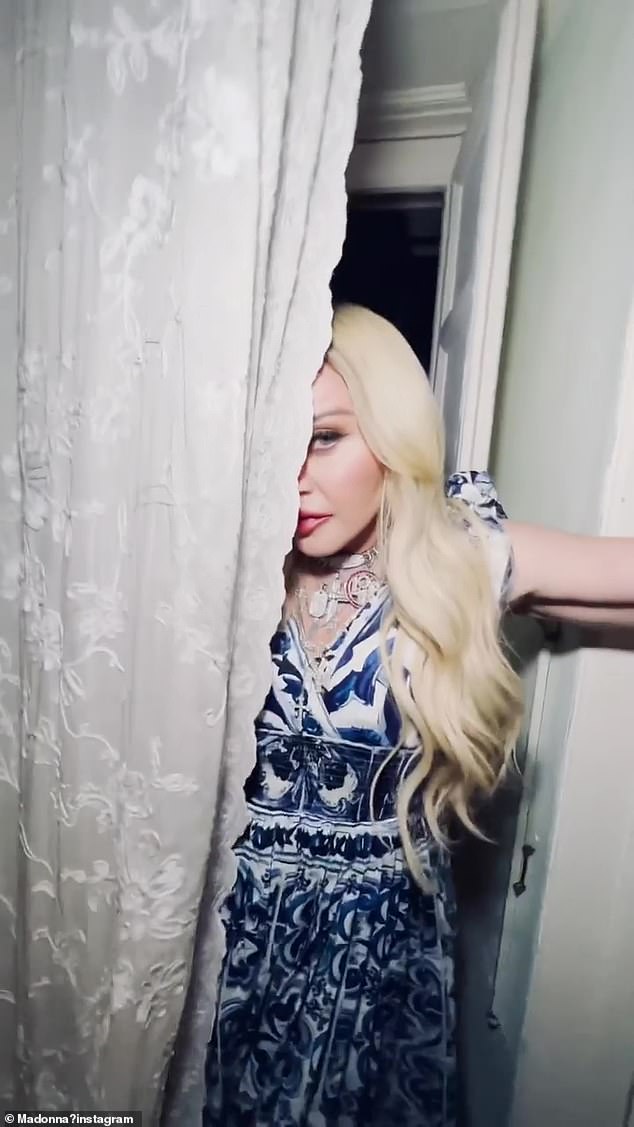 And Madonna spilled that she came to make the movie because she was fed up with men wanting to tell her story in a misogynistic way.

‘It was also a preemptive strike because a lot of people were trying to make movies about me. Mostly misogynistic men. So I put my foot in the door and said, ‘No one’s going to tell my story, but me.’

The Body Of Evidence actress also ruled out selling the rights to her back catalogue like Bob Dylan, Bruce Springsteen and Neil Young have done lately.

She told the outlet: ‘Because they’re my songs. Ownership is everything isn’t it?’

In 2021, Madonna released a trap version of her 1998 hit Frozen after it went viral on TikTok, and four remixes followed. 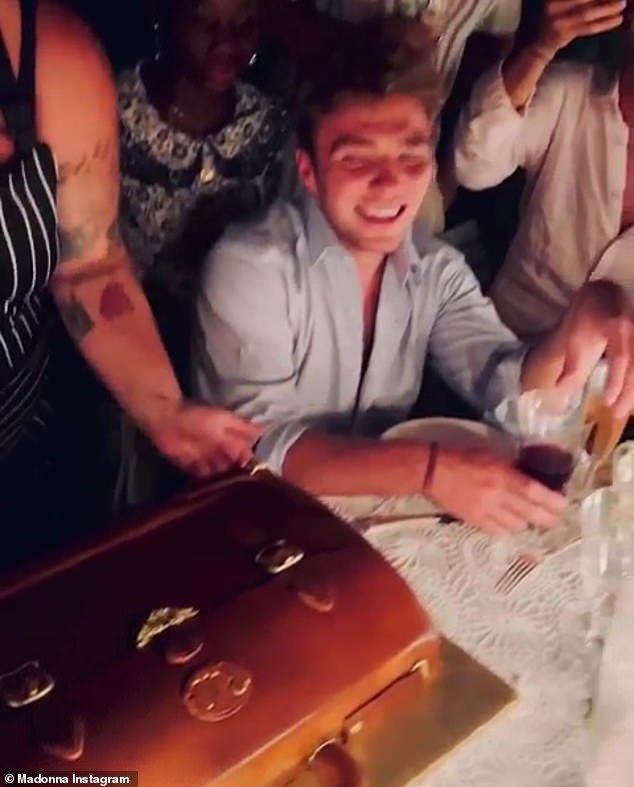 Her son is there too: Her boy Rocco Ritchie, whose dad is director Guy Ritchie, received a cake; he turned 22 on August 11

It came after the music legend announced her plans to re-release her back catalogue.

She said: ‘I’m just looking for interesting, fun ways to rerelease my catalogue and introduce my music to a new generation.’

And she also hinted she’s planning to head out on tour again. Madonna added: ‘The whole thing with ‘Frozen’ was so fun, but I woke up one day and went, ‘I’m sick of living in the past!’ I want to go on tour again, I’m a creature of the stage. That is my happy place.’

MADONNA’S TOP LOOKS OVER THE YEARS

She is the queen of style reinvention.

Madonna has set fashion trends since she first rolled onto the music scene in the early 1980s.

There was her vintage shop look for Borderline, her sleek style for Bedroom Stories, a cowgirl look for Music, a hippie yoga feel for Ray Of Light and a disco theme for Confessions On A Dance Floor.

Her latest Rebel Heart toyed with a bondage theme.

And so many other styles were sprinkled in between those phases.

Here is a look back at her most dazzling fashion statements as she went from New York City club goer to big time Grammy winner, and now, TikTok favorite.

1983 – Holiday saw her in lace in 1983. Borderline and Lucky Star were variations on that same look

She had a messy vintage store collection look when she kicked off her career in 1982 with Everybody in NYC.

More of the same – with lace mixed with denim and rhinestones – for 1983’s Burning Up.

By the time her self titled album Madonna came out in 1983 she was leaning on stacks of bracelets, leggings and crop tops.

Holiday saw her in lace in 1983. Borderline and Lucky Star were variations on that same look. 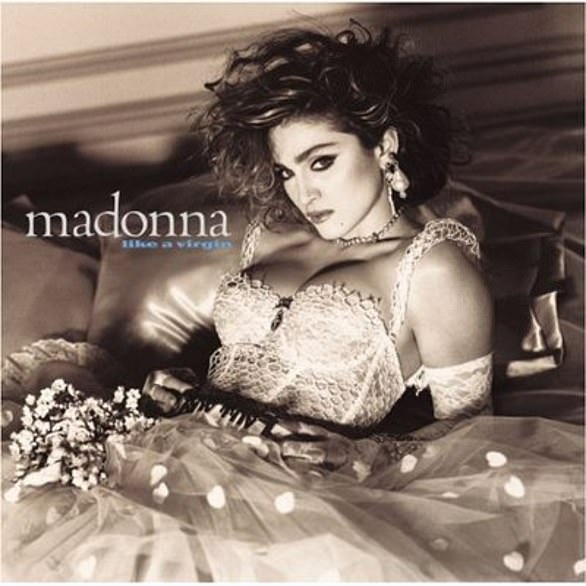 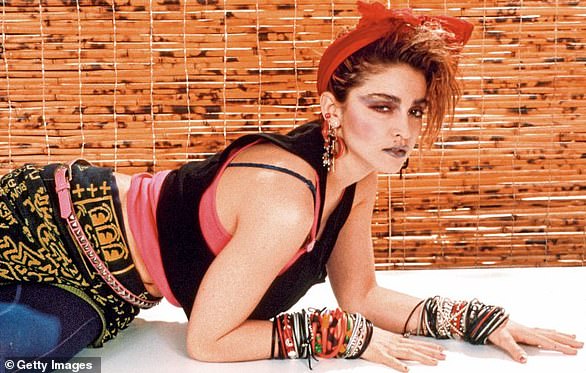 1984 – By the time her self titled album Madonna came out she was leaning on stacks of bracelets, leggings and crop tops

For Like A Virgin in 1983 she was shock blonde and in a wedding dress with layers of necklaces.

Material Girl in 1985 saw her borrow from Marilyn Monroe.

By the time she debuted True Blue in 1986, she had an entirely new look., It was more 1940s inspired with a vintage look for Live To Tell and Lana Turner appeal for La Isla Bonita. 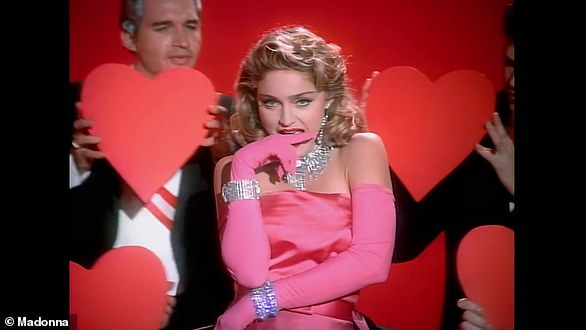 1985 – In the music video for Marilyn Girl. She was re-creating the scene Marilyn Monroe shot for her film Gentleman Prefer Blondes when she sang Diamond’s Are A Girls Best Friend 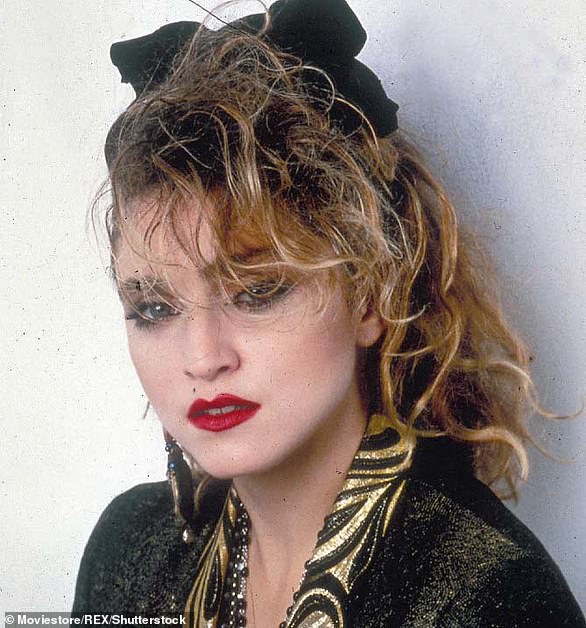 Dark hair and black lingerie was the theme for Like A Prayer.

And a very chic pantsuit look with lace lingerie dominated her Express Yourself video.

She went for Hollywood glam when promoting Dick Tracy with her boyfriend at the time, Warren Beatty. 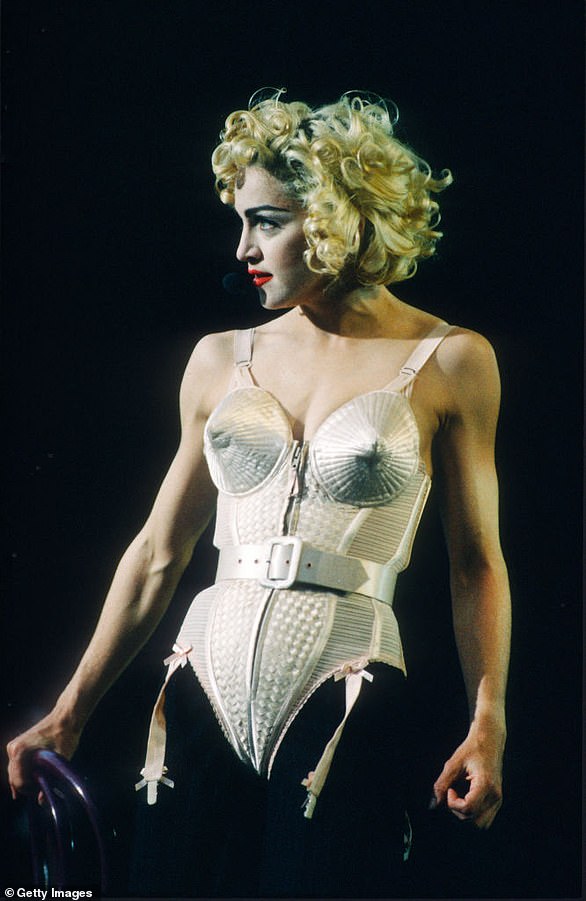 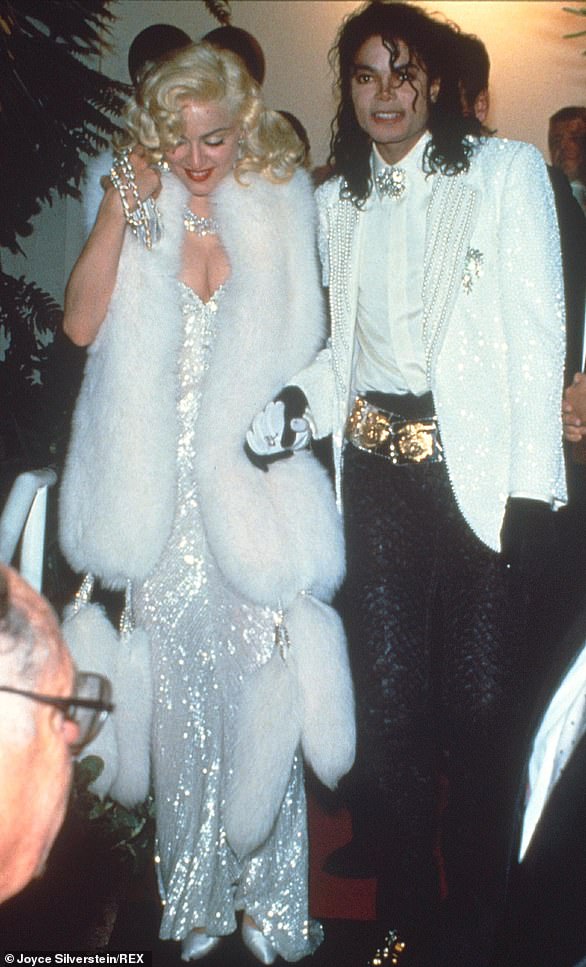 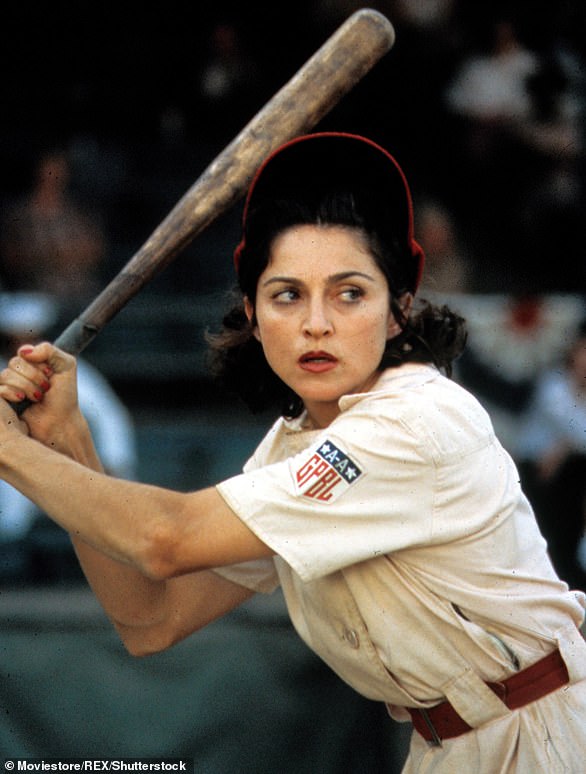 Corsets, garter belts and thigh high stockings with ruby red lipstick was her costume for Justify My Love.

A more elegant boudoir look was used for Erotica and her coffee table book, Sex in 1992.

And she looked retro for her acting turn in A League Of Their Own. 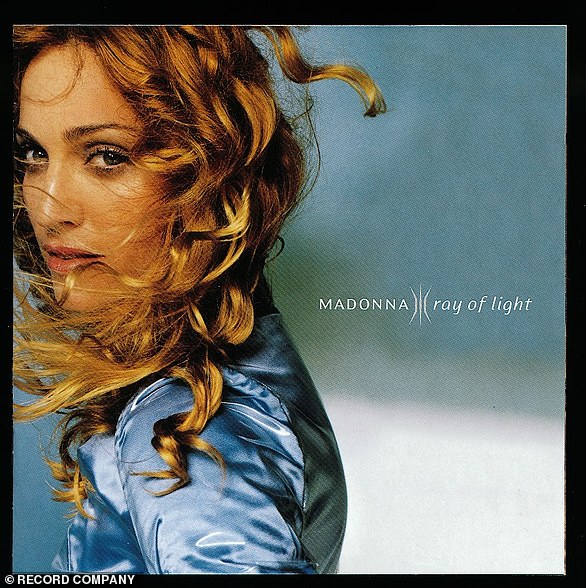 1998 – Ray of Light stripped her of her lingerie looks as she focused on a more hippie, patchouli smelling style with long hair, braids, beads and ripped jeans

The 1992 film with Tom Hanks and Geena Davis was a smash hit as Madonna wore red lipstick and 1940s era baseball dresses.

The role of the Argentinian helped land on the cover of Vogue and looking red carpet ready at events. 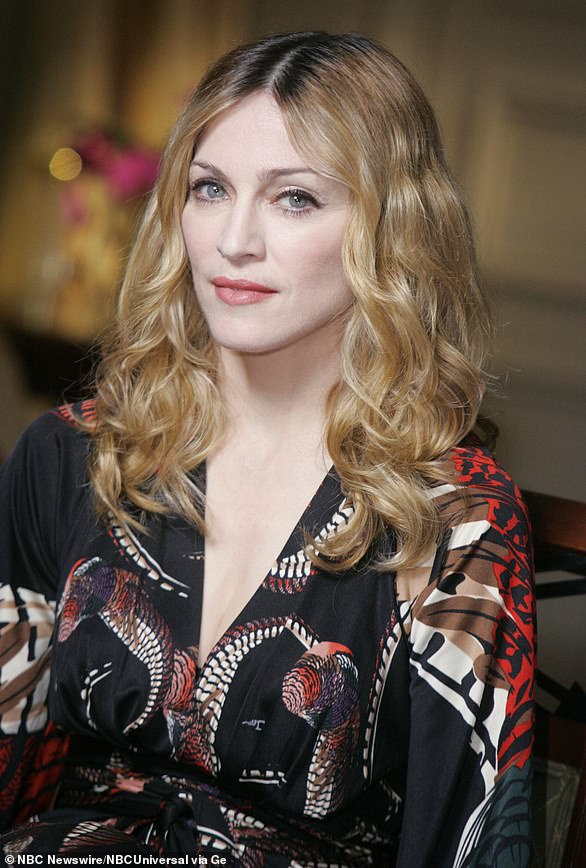 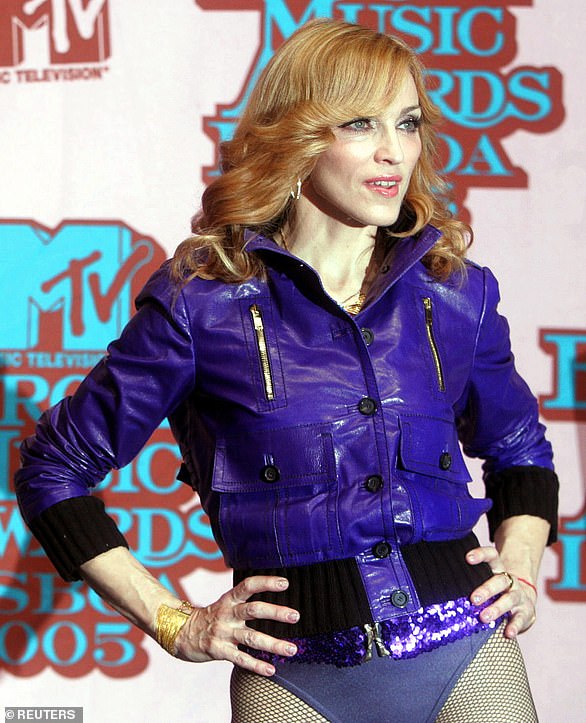 2006 – Then it was a disco look with a leotard, fishnets and dance shoes for Confessions On A Dance Floor

Ray of Light stripped her of her lingerie looks as she focused on a more hippie, patchouli smelling style with long hair, braids, beads and ripped jeans in 1998.

In 2000 with Music she borrowed a cowgirl theme, making denim and diamonds fabulous.

American Life in 2004 saw her in military garb wit a beret. 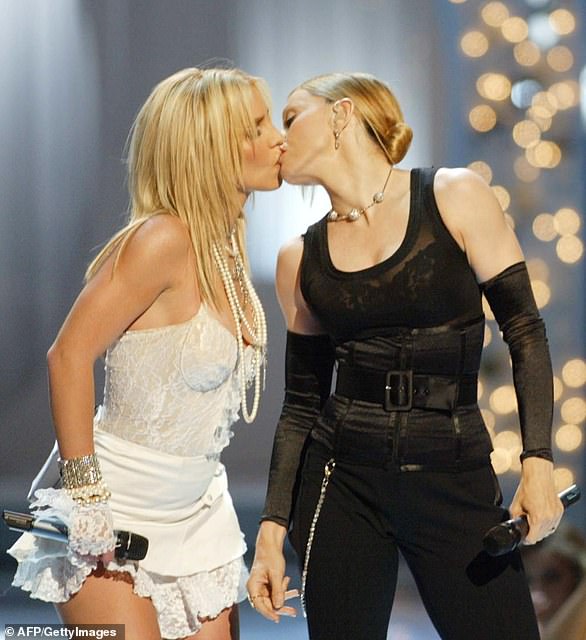 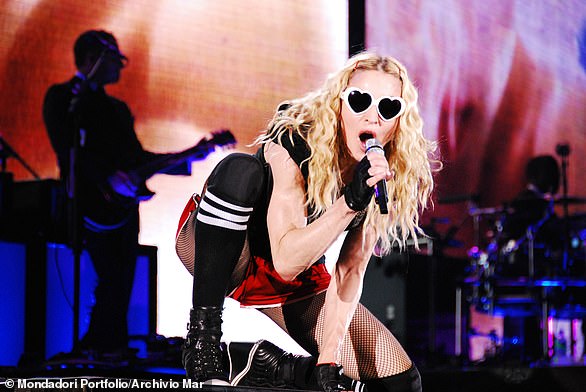 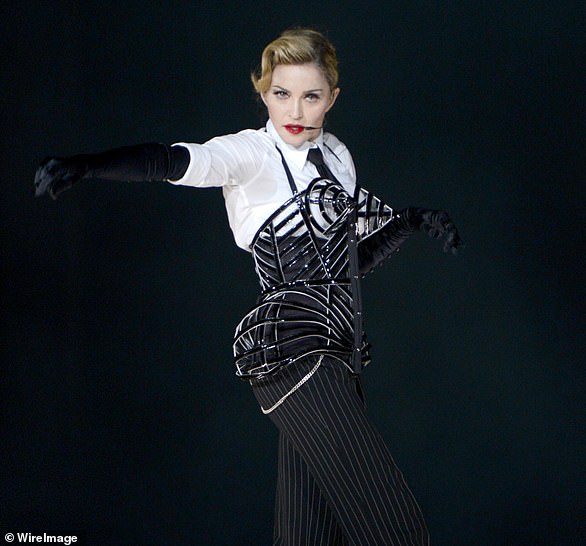 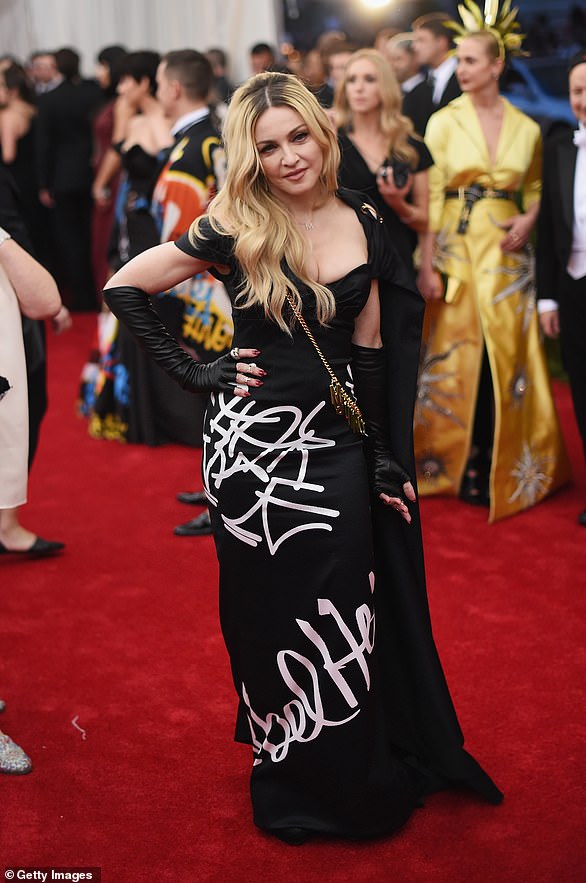 2015 – Madonna attends the China: Through The Looking Glass Costume Institute Benefit Gala at the Metropolitan Museum of Art in 2015 in New York City

Then it was a disco look with a leotard, fishnets and dance shoes for Confessions On A Dance Floor in 2006.

Hard Candy brought her back to a bondage look that was high on sex appeal and high heels.

And then she went with all black for Rebel Heart in 2015 with long curly hair.

Now she is focusing on sexy selfies with leotards and sometimes dresses as she re-invents herself with Instagram and TikTok.

Her most recent highlight is her collaboration with Beyonce on Break My Sould.