Miley Cyrus hits a fashion high note in a VERY leggy Gucci outfit as she kicks off night one of Lollapalooza with Juicy J, Wiz Khalifa, and Billy Idol

She knows how to draw a crowd.

And Miley Cyrus, 28, did just that and more as she kicked off night one of Lollapalooza in Chicago on Thursday evening with an electric performance.

The Plastic Hearts hitmaker wowed in a red Gucci jumpsuit and continued to excite as she brought out special guests including Juicy J, Wiz Khalifa and mentor Billy Idol during her headlining performance. 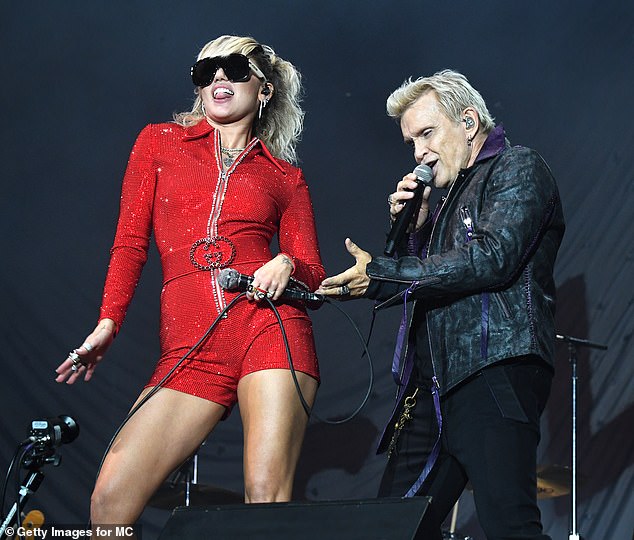 Bringing the noise: Miley Cyrus, 28, draws a crowd at Lollapalooza in Chicago as she performs with special guests Billy Idol, Juicy J and Wiz Khalifa 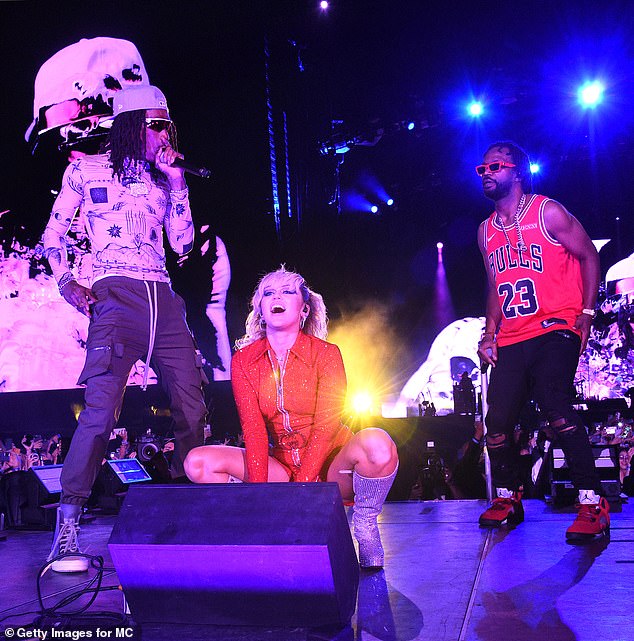 Party time! She brought the two rappers out and they performed a rendition of Juicy J’s ‘Bandz A Make Her Dance’

Miley showcased her slim legs in a sparkly red Gucci jumpsuit  and a pair of equally glittery silver platform boots.

She revealed on Instagram: ‘The suit & boots were hand flown in from Italy and delivered personally to me. THAT’S CUSTOM!,’ and called the look ‘bananas.’

Her hair was teased up into a pseudo-ponytail and she shielded her eyes behind rather large black sunglasses for a bit of mystique.

Cyrus worked the stage as she performed an edgy duet of Night Crawling with Idol, 65. 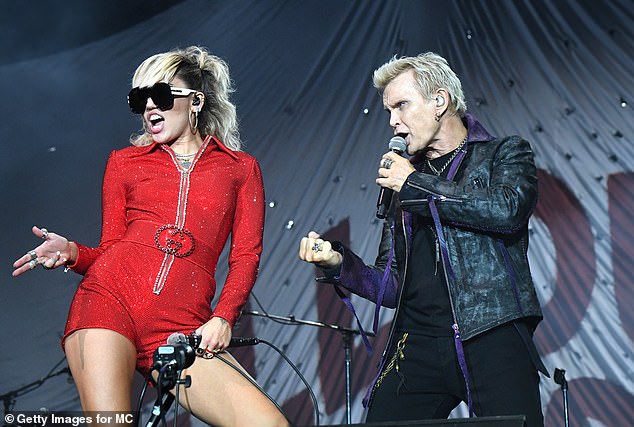 Double trouble! She and Idol lit up the stage with their song Night Crawling 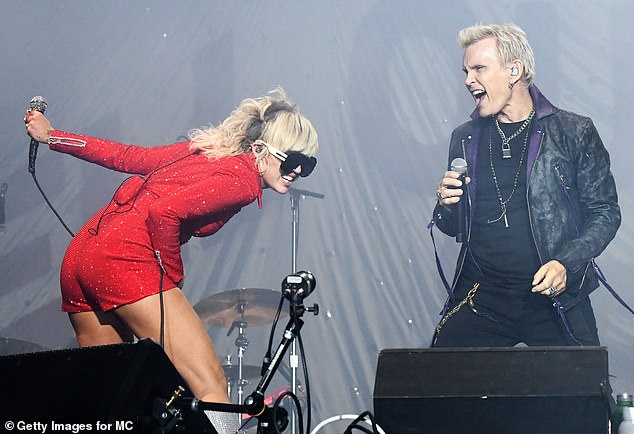 Inspiration: Speaking about Idol to Rolling Stone she said ‘He showed me that I could have balance, that I could make music that I and other people love’ 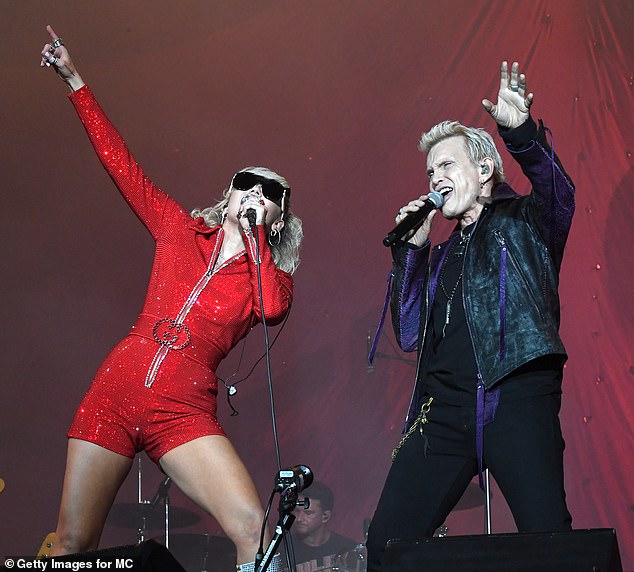 Red hot!  ‘The suit & boots were hand flown in from Italy and delivered personally to me. THAT’S CUSTOM!,’ she wrote of her Gucci look which she called ‘bananas’

In a December interview with Rolling Stone, she had spoken about the White Wedding singer’s influence on her music and said that he taught her a lot about musical ‘balance.’

‘His music… the way that he married rebellion but also his music where he had incredible hooks. And he showed me that I could have balance, that I could make music that I and other people love,’ she recounted.

Later she brought a hip hop flare into her set as she welcomed out Wiz and Juicy J.  The trio did a rendition of Bandz a Make Her Dance, during which she got on her knees after twerking. 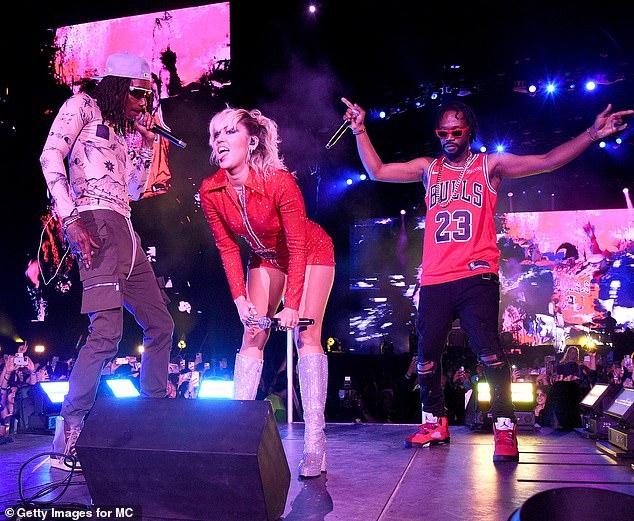 Packed house: ‘F**K & the audience last night had enough energy to fuel a rocket! I love you!,’ she remarked of her performance 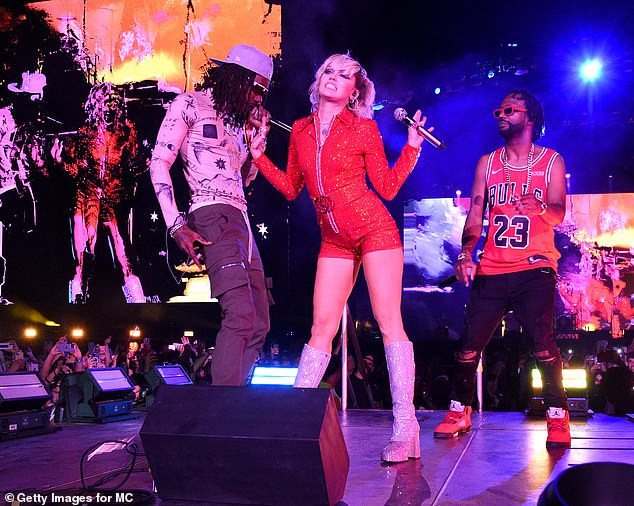 Twerk: Miley let loose as she twerked her way through the set to the crowd’s delight

The unexpected special guests caused a frenzy as the crowd chanted the lyrics while she let loose in true Miley fashion and even brought out the Chicago Bulls mascot.

She shared a carousel of images from the night as she gushed: ‘To my band , crew , creative partners & team – You’re the best in the f**king world! There is so much [heart] in this show! F**K & the audience last night had enough energy to fuel a rocket! I love you!’

In addition to playing some songs from her recent Plastic Hearts album she also brought out The Kid LAROI for Without You and threw it back to some oldies including the banger Party In The USA.

Lollapalooza was cancelled last year amid the Coronavirus pandemic, and Miley certainly made up for lost time with her action-packed performance. 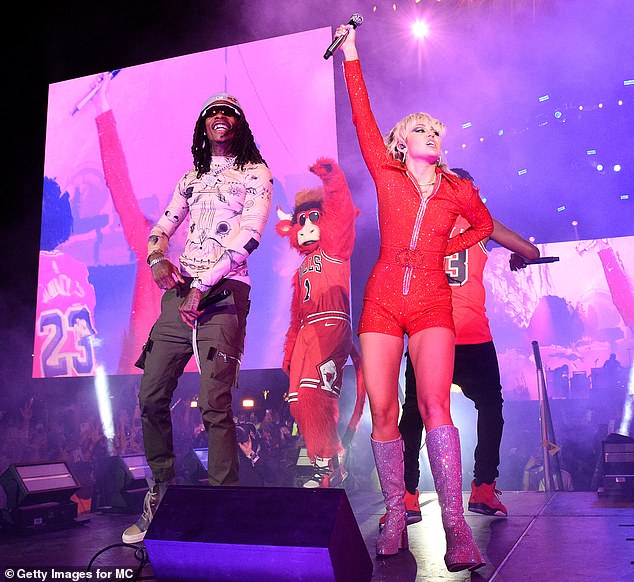 Night one in the books: The headliner let loose in true Miley fashion and even brought out the Chicago Bulls mascot for the festival performance