Molly-Mae Hague divides fans for branding £1,950 Gucci x The North Face jacket ‘chav chic’… as some claim she’s ‘tone deaf’ while others say ‘give her a break’

The Love Island star, 21, took to Instagram over the weekend to show off her new designer outerwear in the controversial post, alongside the caption: ‘Chav chic and I’m here for it’. (sic)

Some social media users claimed the influencer is ‘toned deaf’ and ‘disconnected from the world’ for using the ‘classist term’, while others insisted naysayers should ‘give the girl a break’ and focus on ‘bigger problems’ instead. 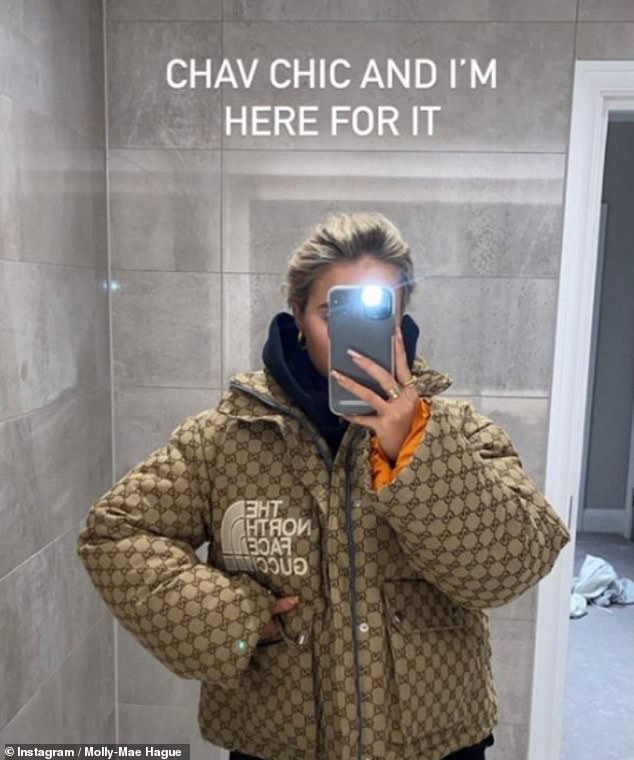 Chav is a term usually used to describe a lower-class youth dressed in sportswear.

However, ‘chav chic’ also refers to the trend of athleisure loungewear – a look previously favoured by the likes of Paris Hilton and Britney Spears, who made pink velour tracksuits and Von Dutch caps a staple in many noughties wardrobes.

On the topic, one slammed: ‘molly mae calling her gucci tnf jacket ‘chav chic’ really does back my dissertation. saying stuff like that with the potential of ‘influencing’ her 5 mill followers to use classist terms like that really does not sit well with me.’ (sic)

Others agreed: ‘please tell me molly mae didn’t actually say ‘chav chic’ … ??? how can someone be so disconnected from the outside world. 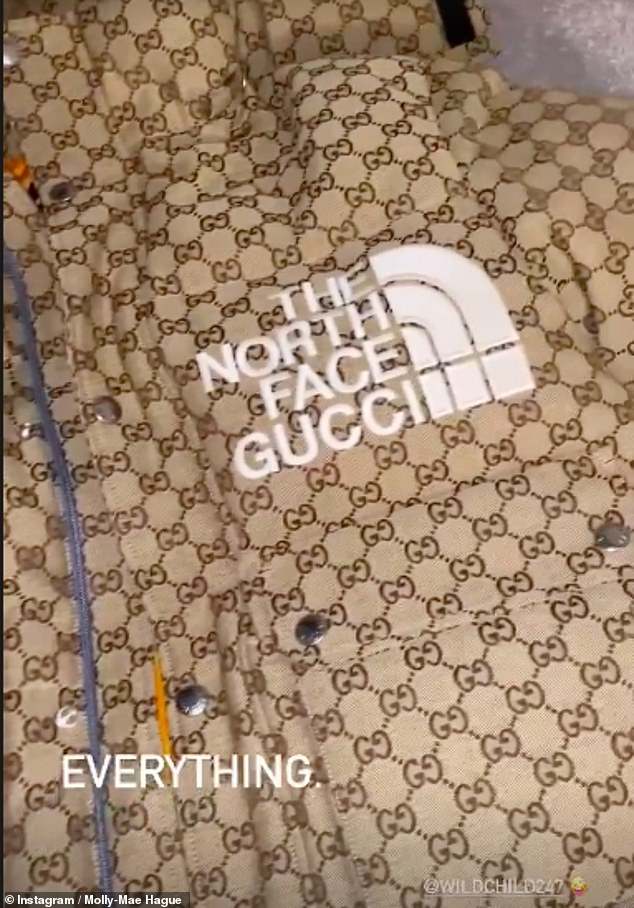 Luxurious: The Love Island star, 21, took to Instagram over the weekend to show off her new designer outerwear

‘Calling out molly mae for using the words chav chic to describe a £2000+ coat is not ‘jealousy’, I absolutely love her but she is very tone deaf and so are a lot of you on here clearly …

‘Hoping this is the year the idolising of Molly-Mae slams to a grinding halt when we add classist slurs to the mix of dreadful film taste, sh** cooking skills and buying dogs from illegal puppy farm breeders.’ (sic)

However, many of her fans saw the humour in her description and told the critics to ‘be angry at something worth your time.’ (sic) 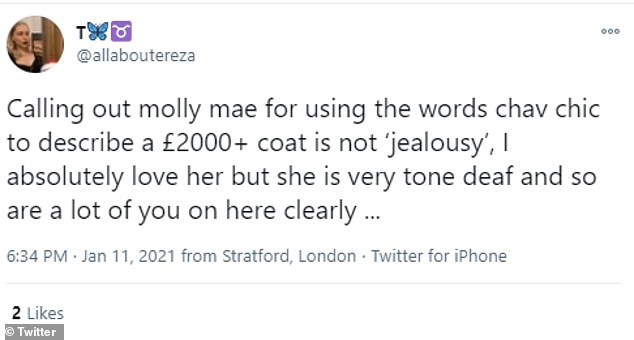 ‘She is very tone deaf’: Some social media users claimed the influencer is ‘disconnected from the world’ for using the ‘classist term’

They said: ‘All these ppl hating on molly mae have defo said worse things than chav and are just using this for another reason to hate on her.

‘I’m from a working class background from a council estate…i’m literally the epitome of the word and I can assure you the word isn’t offensive.

‘there’s literally nothing offensive about the word ‘chav’ there’s way bigger problems out there mate. get a grip.

‘If you’re on the internet greetin about molly mae saying chav you need to relax. Go for a walk. Clear your head. All will be okay, I promise. 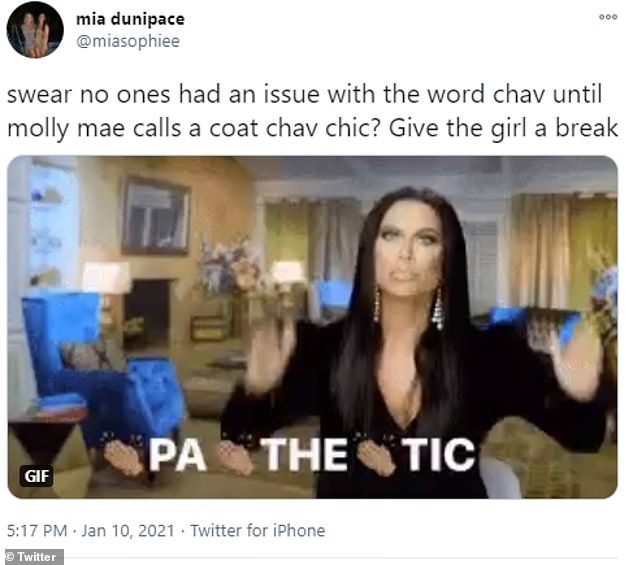 ‘Get a grip’: Others insisted naysayers should ‘give the girl a break’ and focus on ‘bigger problems’ instead

‘Molly mae in a gucci north face jacket calling it chav chic had me rolling all day omg…People having a go at Molly Mae for saying ‘chav chic’ is mind blowing to me. Why not get angry at something worth your time?

‘Why is it bad that Molly Mae has said chav? I’ve been getting called one my whole life just checking incase I deserve compensation.

‘Is it surprising that the majority of the people kicking off about Molly mae saying the word chav all have ‘Rose’ in their twitter bios, lol no it is not. 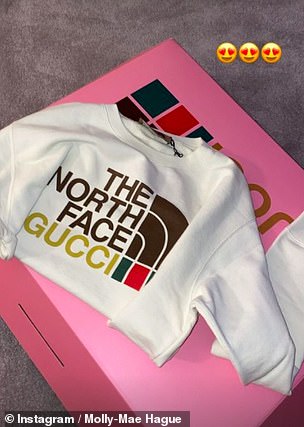 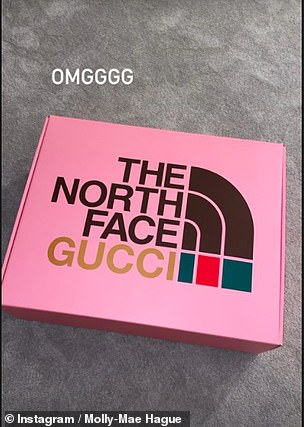 What a collection: The YouTuber also revealed she’s the proud owner of a sweatshirt from the recently released line

‘swear no ones had an issue with the word chav until molly mae calls a coat chav chic? Give the girl a break.

‘Madness mate, folk offended over that Molly Mae bird using the word ‘chav’ i genuinely give up with people. Laughable.’ (sic)

MailOnline has contacted representatives for Molly-Mae for further comment. The backlash came after the media personality celebrated her 18-month anniversary with her boyfriend Tommy Fury at home in Cheshire.

Making sure it was one to remember, the boxer, 21, treated his ‘soulmate’ to a surprise romantic evening complete with rose petals on the floor and a bouquet of flowers.

The YouTuber appeared to be very impressed with her partner’s thoughtful efforts as she filmed his stunning display. 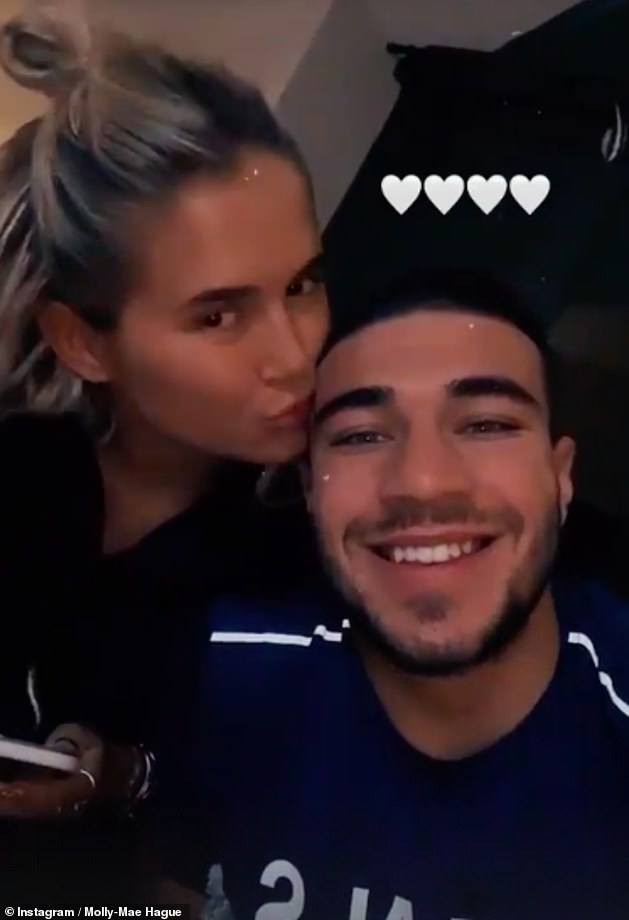 Loved-up: The backlash came after the media personality celebrated her 18-month anniversary with her boyfriend Tommy Fury at home in Cheshire

Bella Thorne DEFENDS Armie Hammer – And If You Are Too, You Should Read This