Francesca Farago went from one highly publicized relationship to another but is now leaning into the single life as she enjoyed a vacation South Of The Border this week.

The 27-year-old Too Hot To Handle star was seen frolicking on the beach in Cancun, Mexico while wearing a skimpy nude bikini that showcased her incredible body.

The swimsuit designer has ignited rekindling rumors with her Netflix costar Harry Jowsey after splitting from Demi Sims, as a series of flirty back and forths have been making the rounds on TikTok.

Too hot to handle! Newly single Francesca Farago, 27, flaunts her incredible body on the beach in Cancun, Mexico in a skimpy bikini

The Canadian born beauty strolled along the beach with a male companion in a colorful shirt and her Pomeranian pooch named Romi.

And she slipped her incredible figure into one of her many swimsuits, opting for a floral printed bandeau with a strappy back and a high rise bottom.

She was seen bouncing between the ocean and the sand where she showed off her figure and struck a few poses for a beachy photo shoot after getting oiled up by her friend.

And for her day at the beach she wore a light face of makeup and gave off serious mermaid vibes while opting to keep her raven tresses down in natural waves. 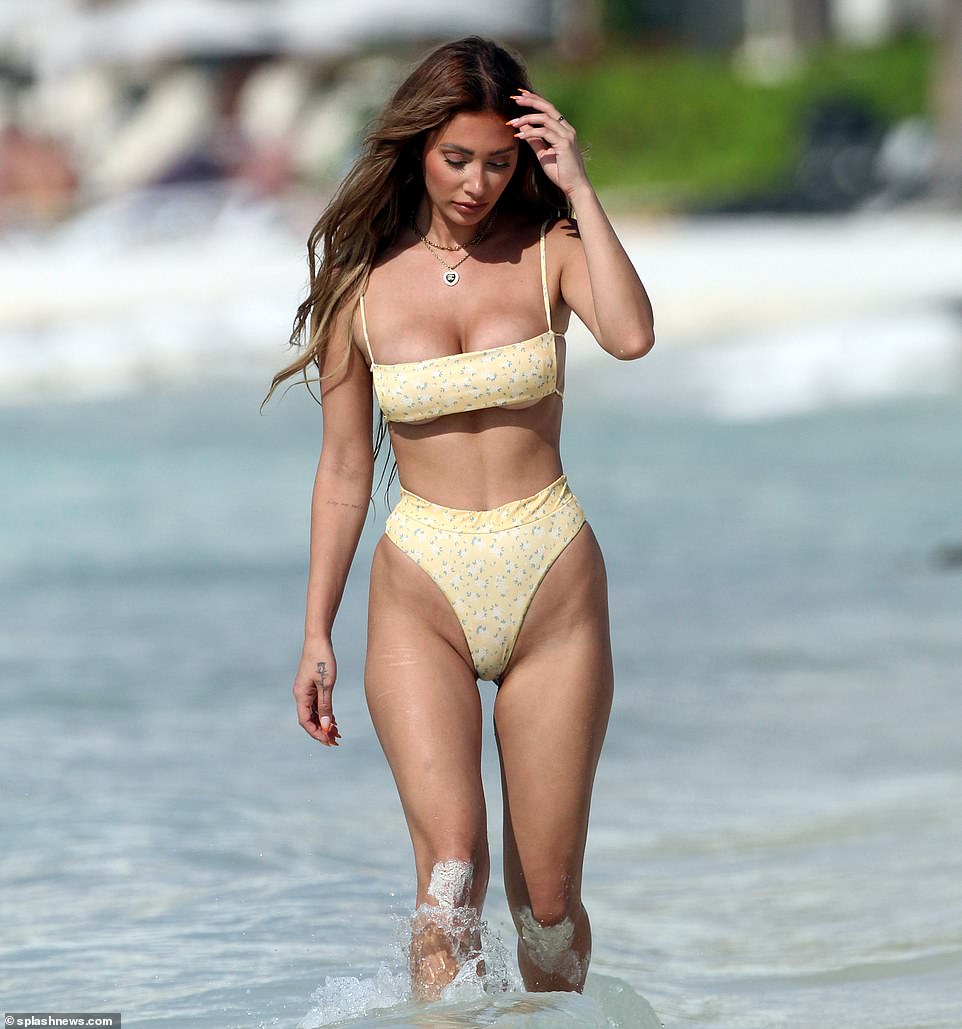 Mermaid of Mexico: For her day at the beach she wore a light face of makeup and opted to keep her raven tresses down in natural waves 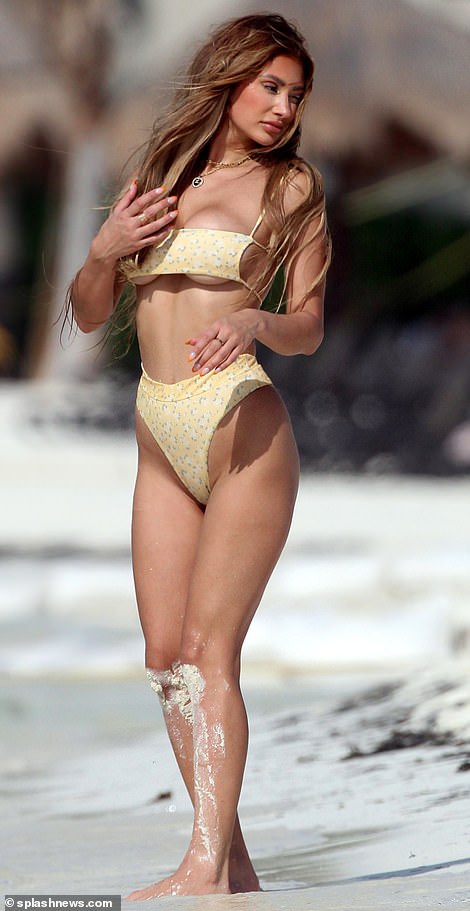 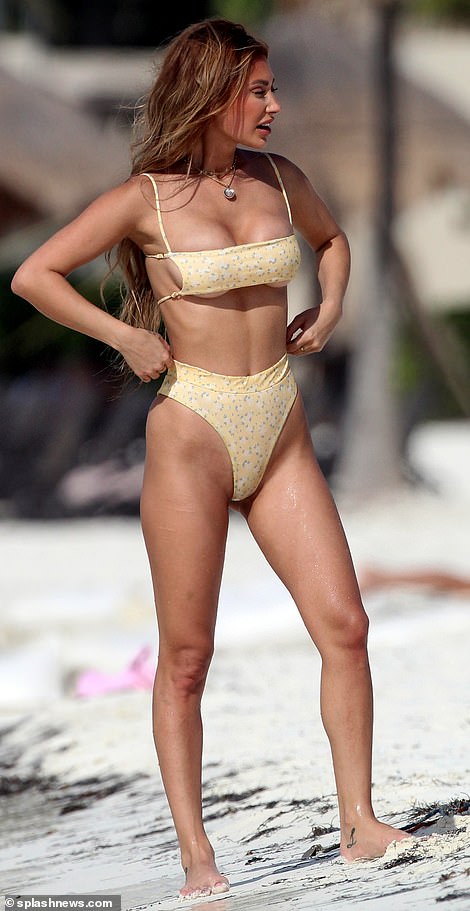 Working it: Francesca slipped her incredible figure into one of her many swimsuits, opting for a floral printed bandeau with a strappy back and a high rise bottom 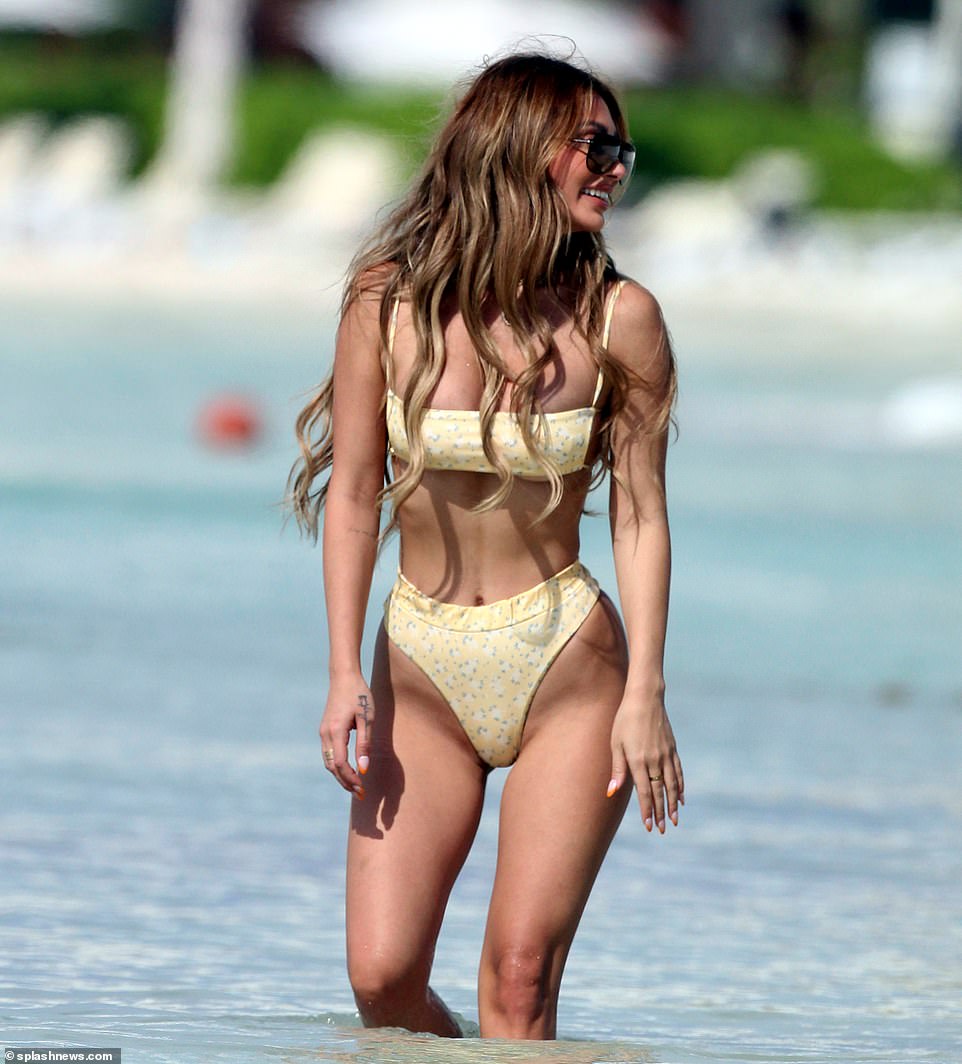 Killer frame: Her statuesque legs and tiny waist were offset by her perky bust which peaked out of her bandeau swimsuit

Ex-lovers: While prancing along the shoreline she showed off her very toned backside and her many delicate tattoos — one of which was a nod to ex Demi inked on her right cheek 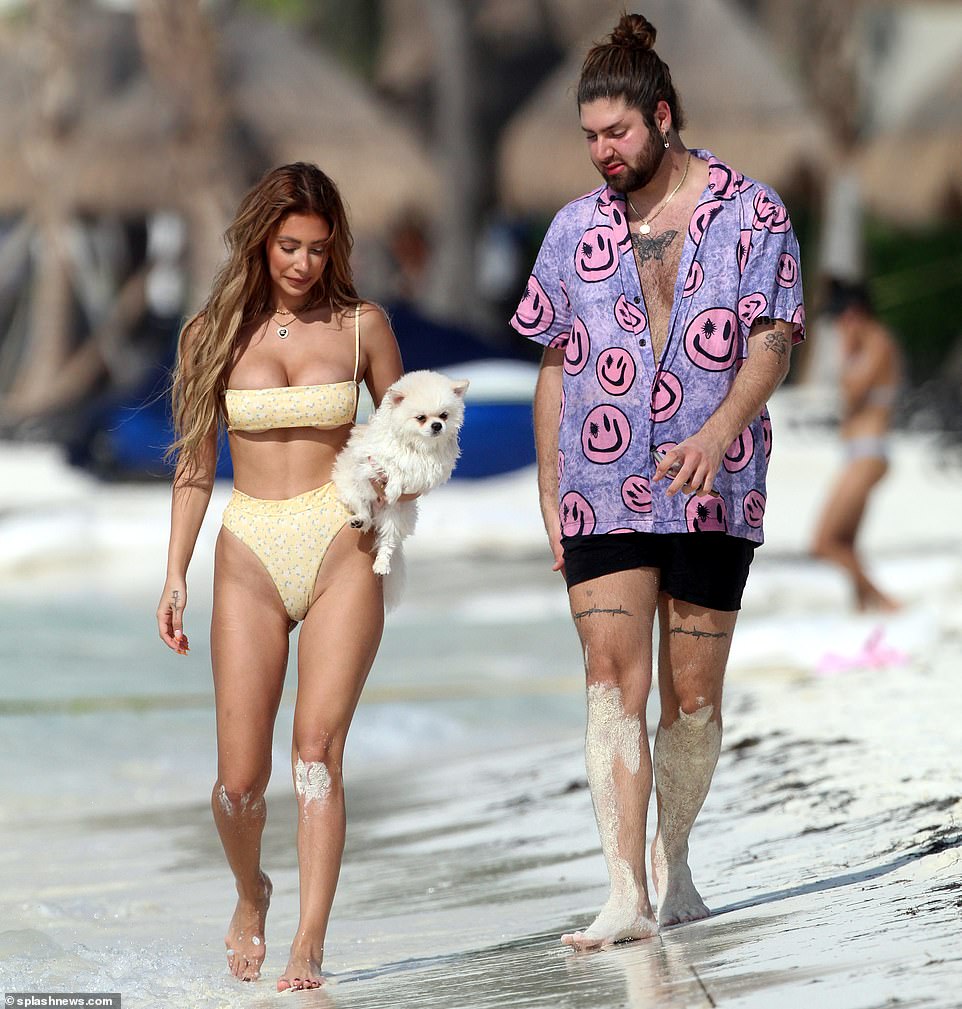 Sandy knees: After an impromptu beach photo shoot and a little dip to cool off, she went for a stroll Her statuesque legs and tiny waist were offset by her perky bust which peaked out of her swimsuit as she laughed with a friend before easing her designer pup into the water.

And while prancing along the shoreline she showed off her very toned backside and her many delicate tattoos — one of which was a nod to ex Demi inked on her right cheek.

The pair had enjoyed a whirlwind romance and a vacation to Mexico before Farago made the decision to move to London to take their relationship up a notch, after Demi asked her to be her girlfriend over the span of three days.

But after moving in with the Towie star they called it quits, both airing their grievances about the relationship publicly. 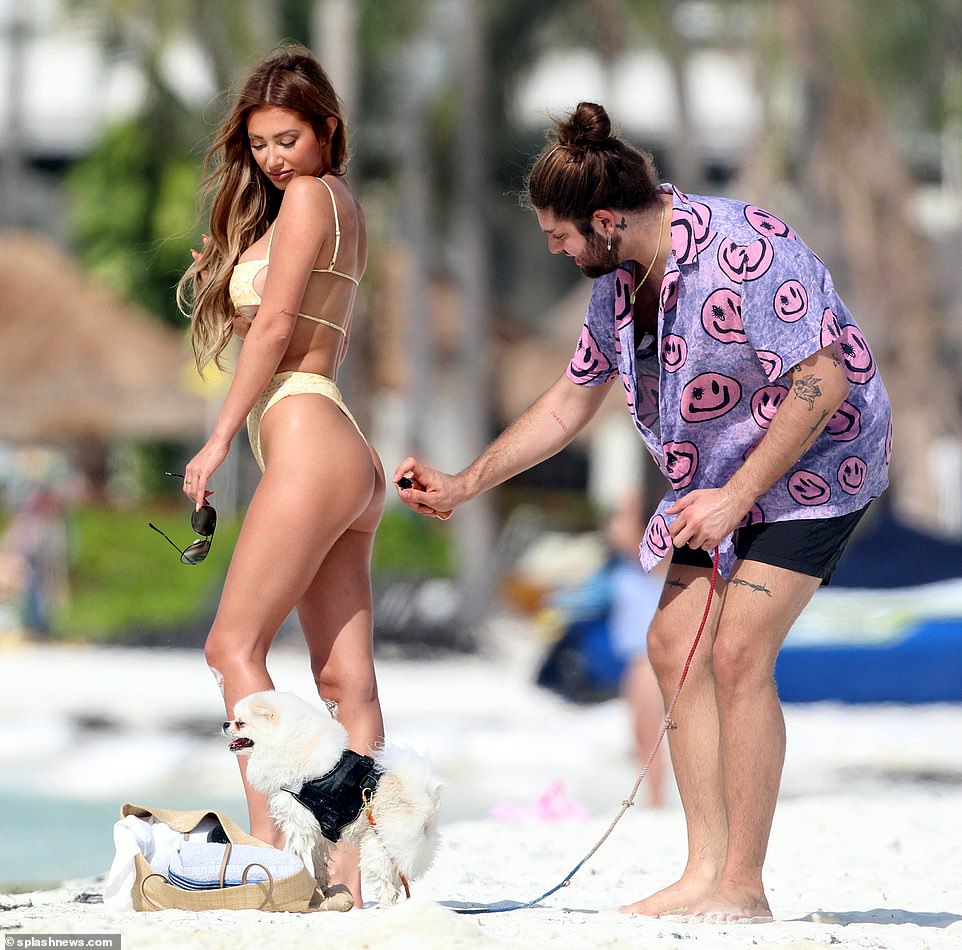 A little help: While on the beach she was seen getting oiled up by a friend who expertly help her get the hard to reach areas 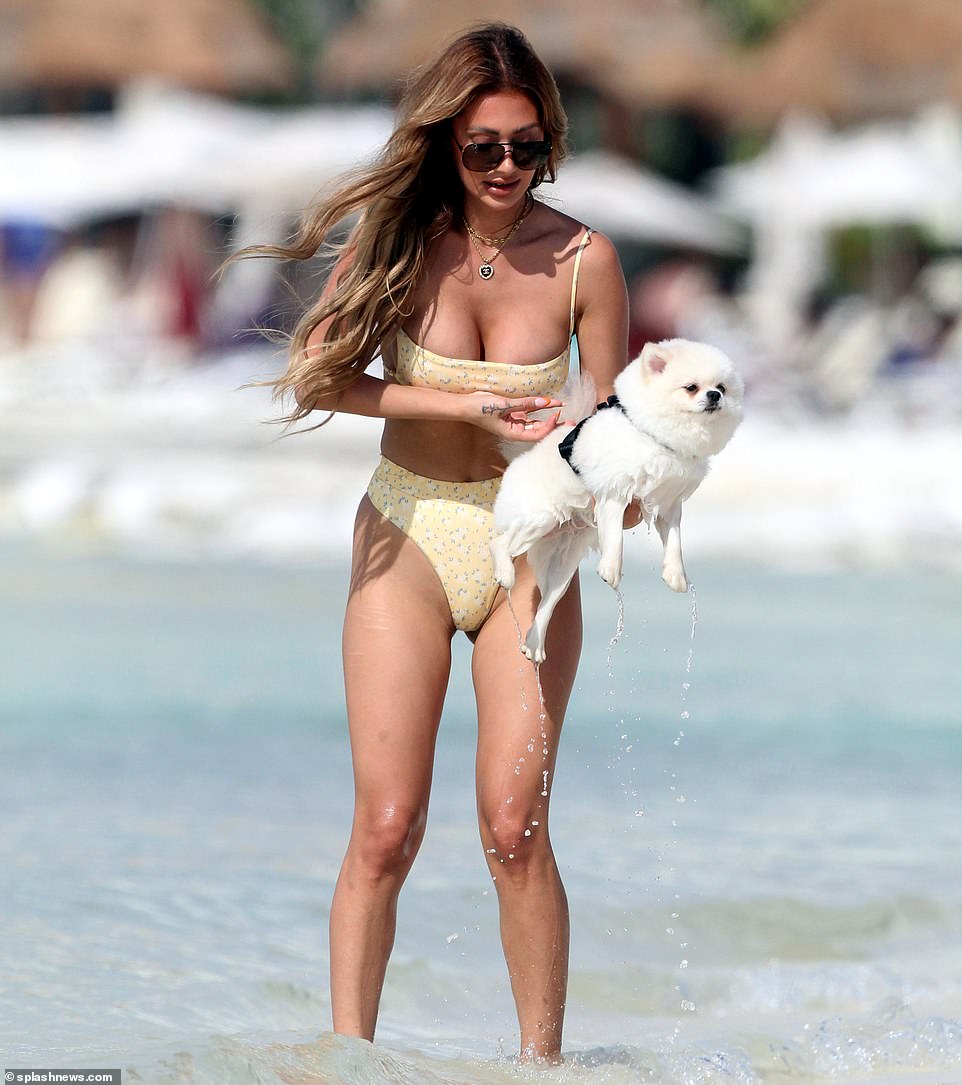 Her main squeeze: Despite a string of public relationships that have since fizzled her trusty companion Romi has been by her side 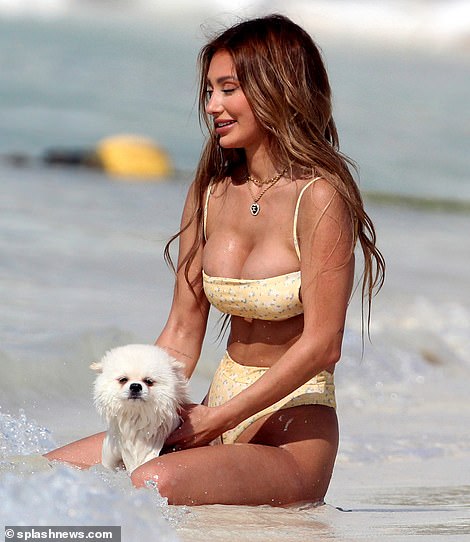 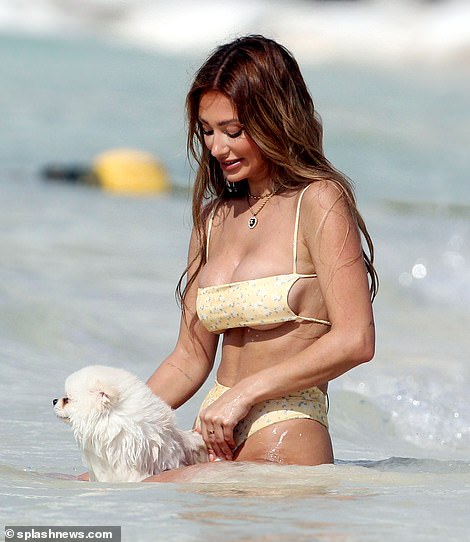 Day at the beach: The Canadian born brunette did not travel light as she toted her dog and many other beach accoutrements to the resort 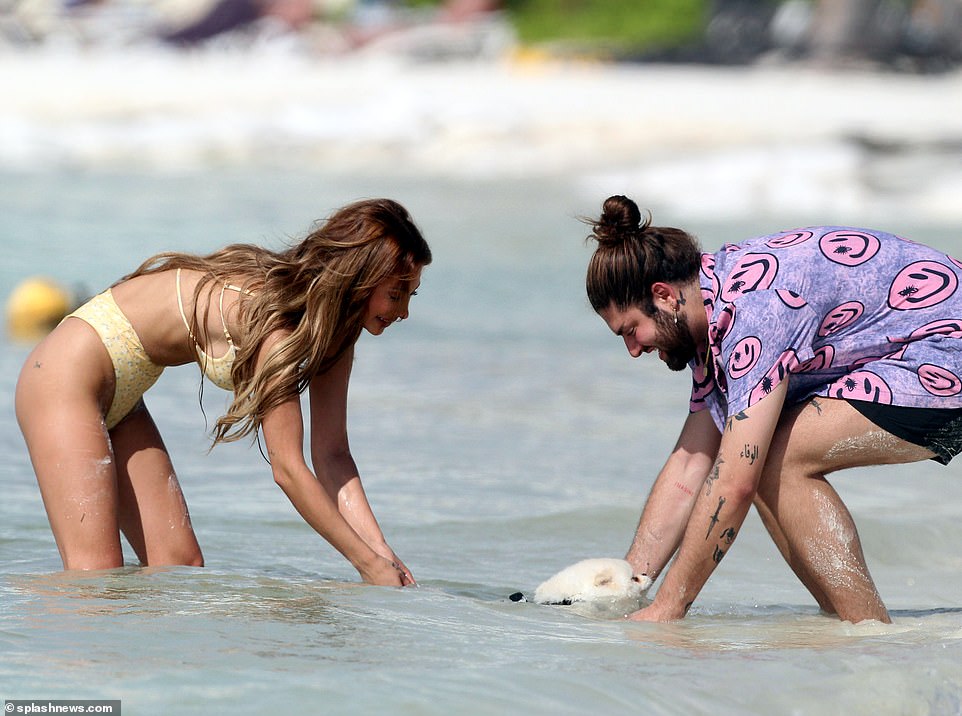 Doting mom: Francesca was seen giving her dog words of affirmation after she expertly doggy paddled in the water

Francesca said that when she got sick with the Coronavirus things began to go south and then ultimately things between them ‘fizzled,’ which resulted in Sims blocking her.

‘We lived together right off the bat and everything was great, and then I got Covid. I got really sick, it kicked my a**. I almost had to go to the hospital. I think that’s when things started to go south between Demi and I,’ she said in a YouTube video.

And Francesca continued to say she felt under-appreciated when Demi didn’t help her with the move.

‘I was really, really stressed and I was really frustrated because I didn’t really feel like Demi was helping me and I’m moving across the country for this person. I was spending so much money… It was a lot of effort and work and I just didn’t feel like I was being helped out or anything was being reciprocated.’ 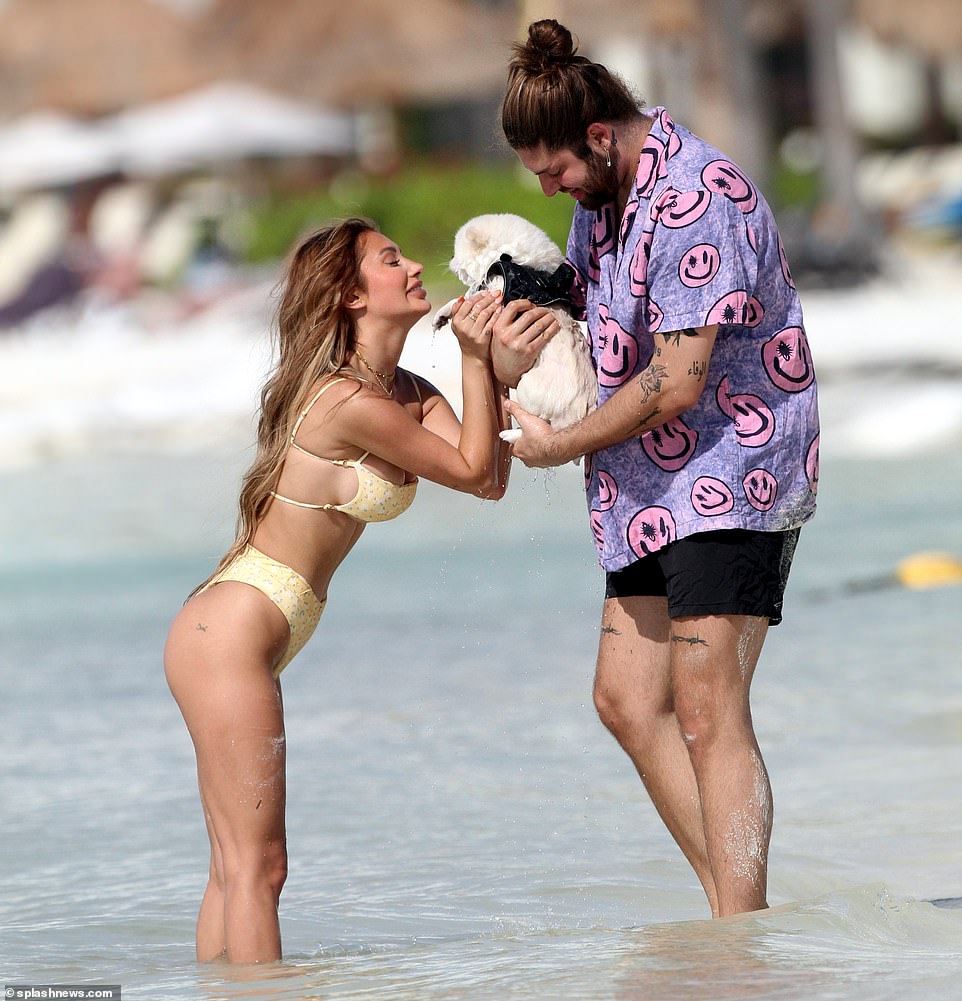 Assistance: Her companion helped her take a few photos for Instagram and shared dog-sitting responsibilities 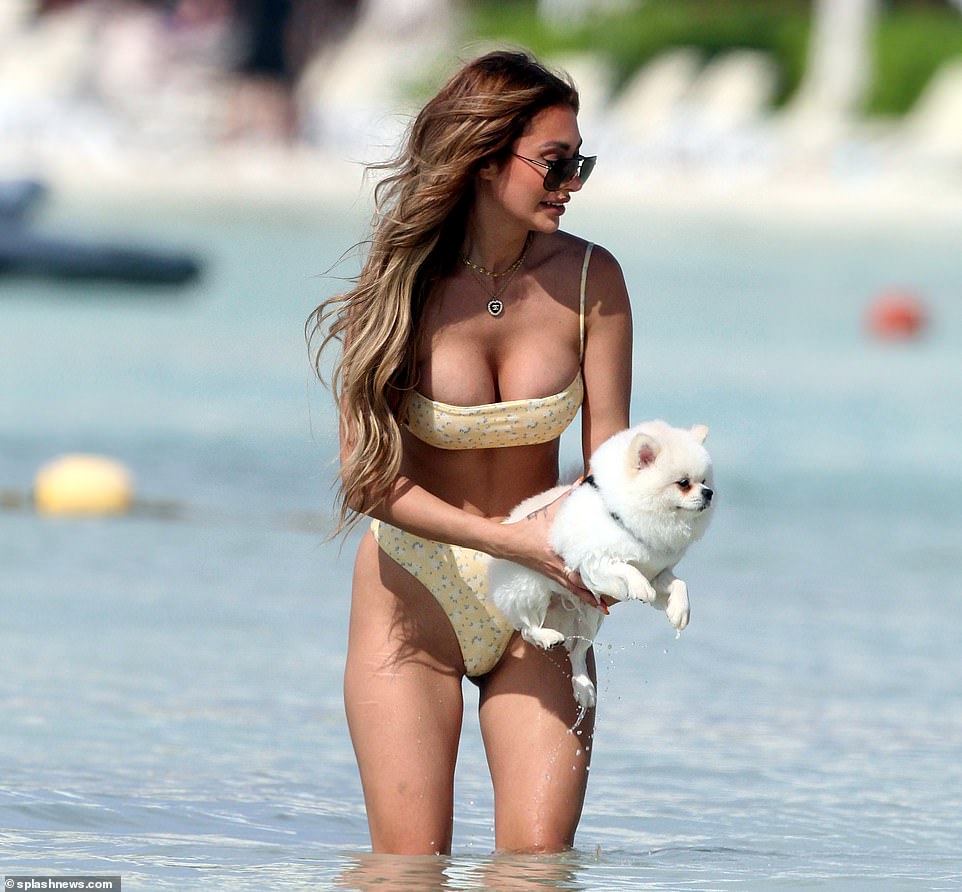 Busting out: Her accentuated bust garnered lots of attention on the beach 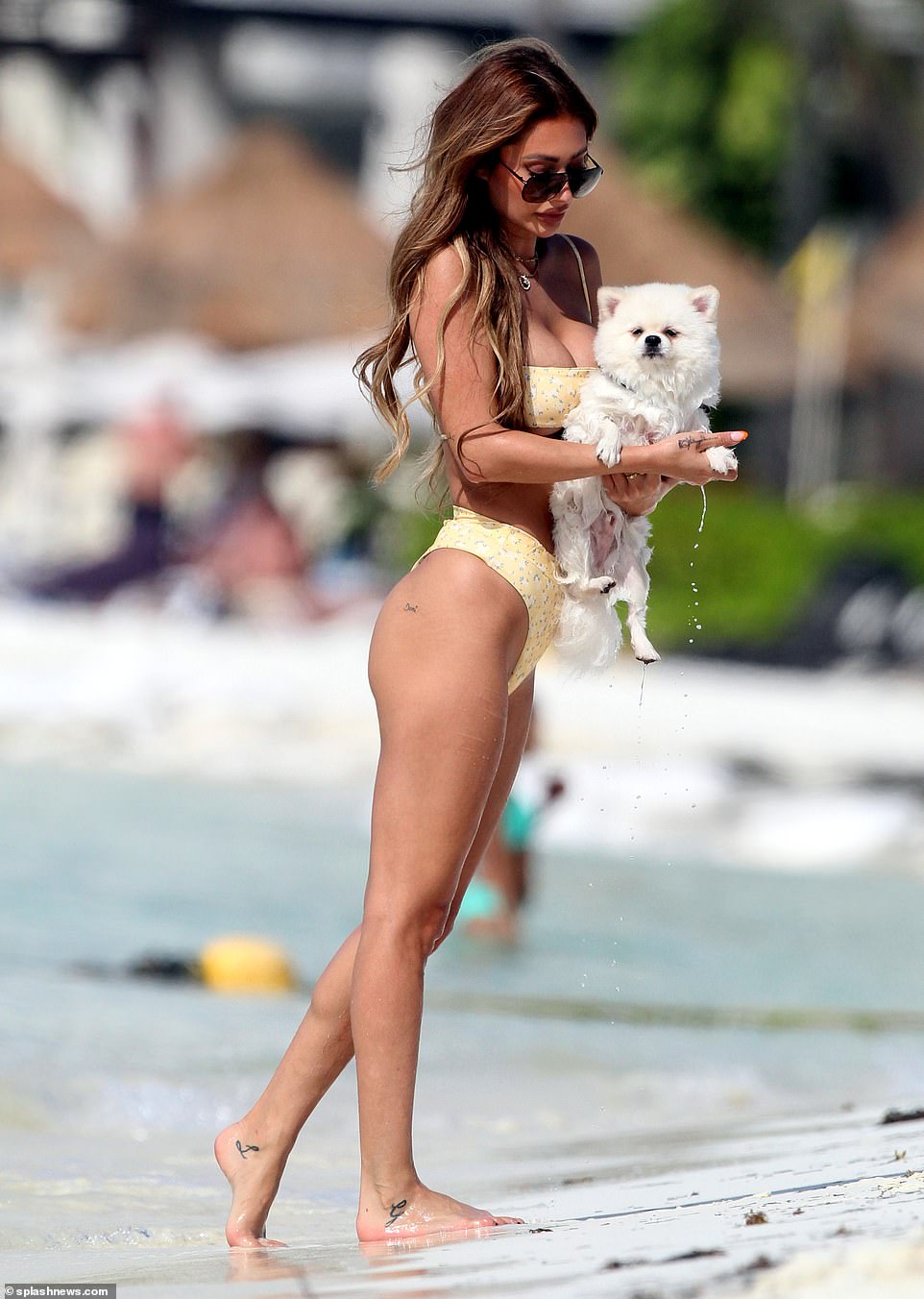 Doting owner: She was seen getting out excess moisture from her dog’s paws

But ultimately she said they just had ‘different expectations’ out of the relationship and in the end they just ‘didn’t match up.’

‘There’s different things that we expected of a relationship, and [that we] need and want, there’s different love languages and ours just didn’t match up and that’s perfectly fine,’ she said.

And after they split, Francesa claimed that they could have ‘remained friends,’ but Demi blocked her and asked her to leave London.

‘After the break-up, she just blocked me and deleted me and told me to leave London and just was like: ”You’re cut”.

But Demi had her own side of the story and said that she was ‘hurt’ by the accusations Francesa had made in her ‘apology’ video — which Demi cited as an afterthought. 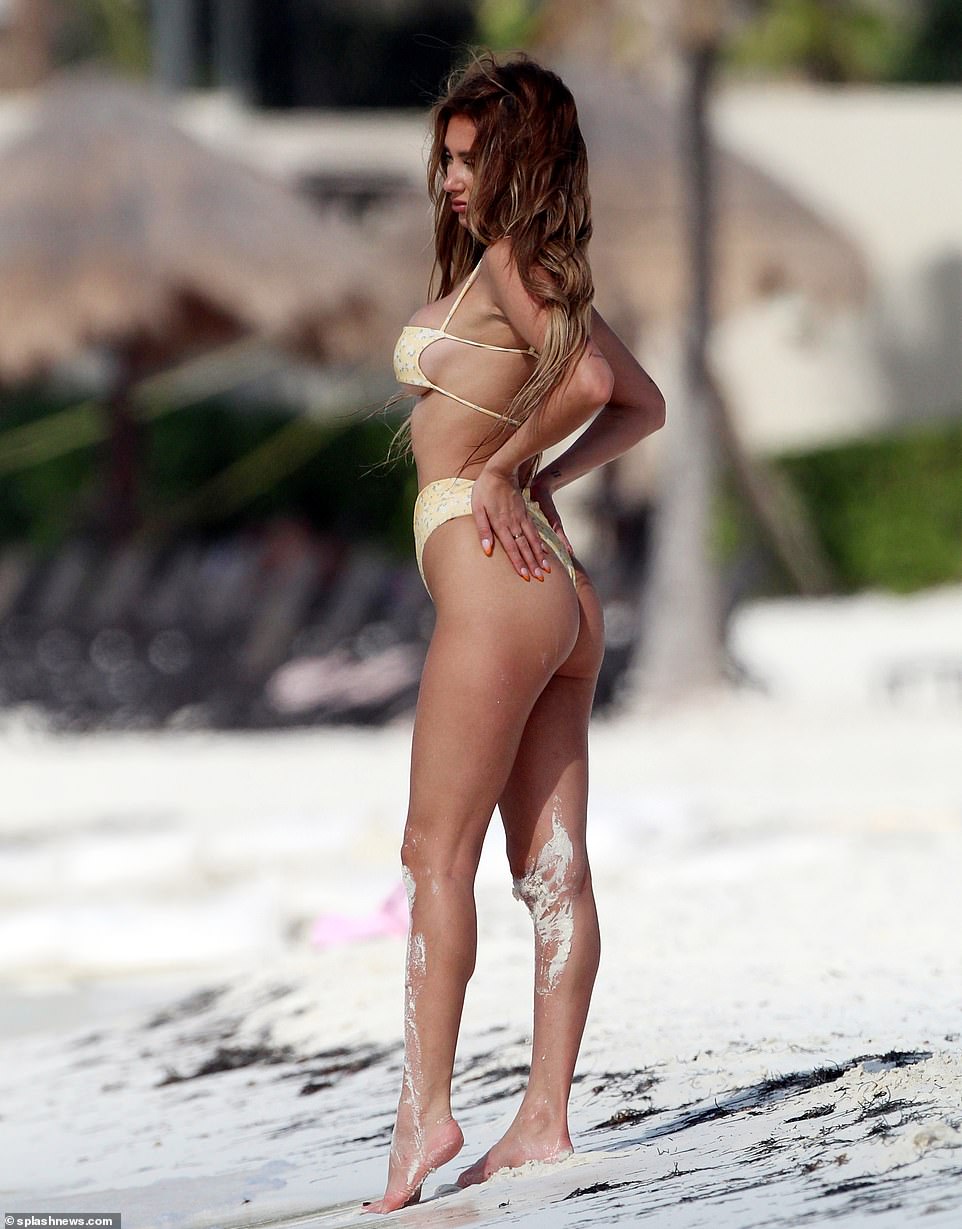 Working her angles: Farago was seen with sandy knees as she struck a few poses 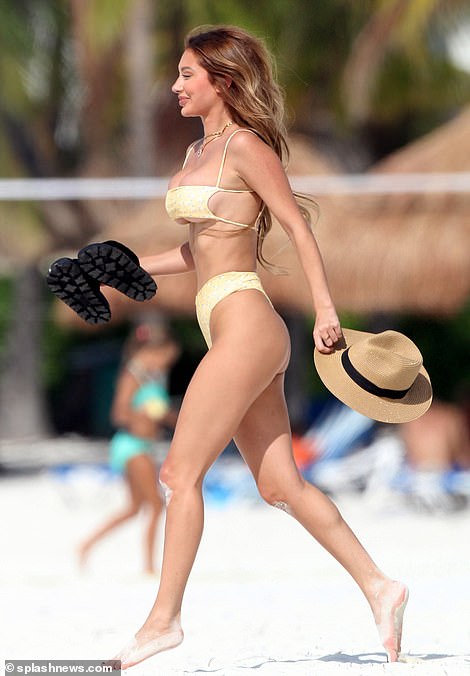 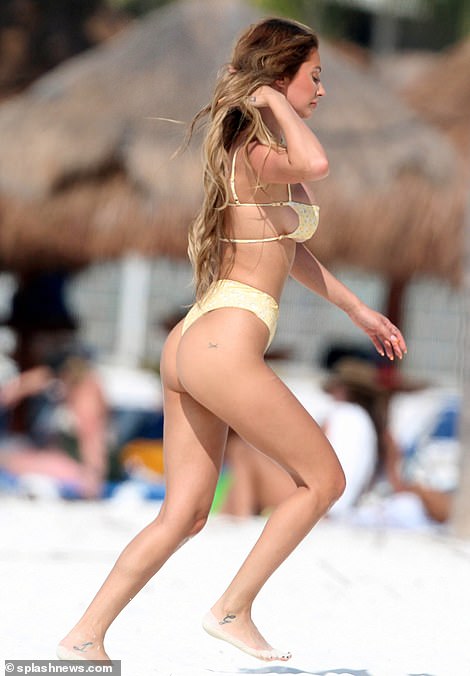 Frolicking: The Instagram model was seen making her way to a tanning spot with a hat and sandals 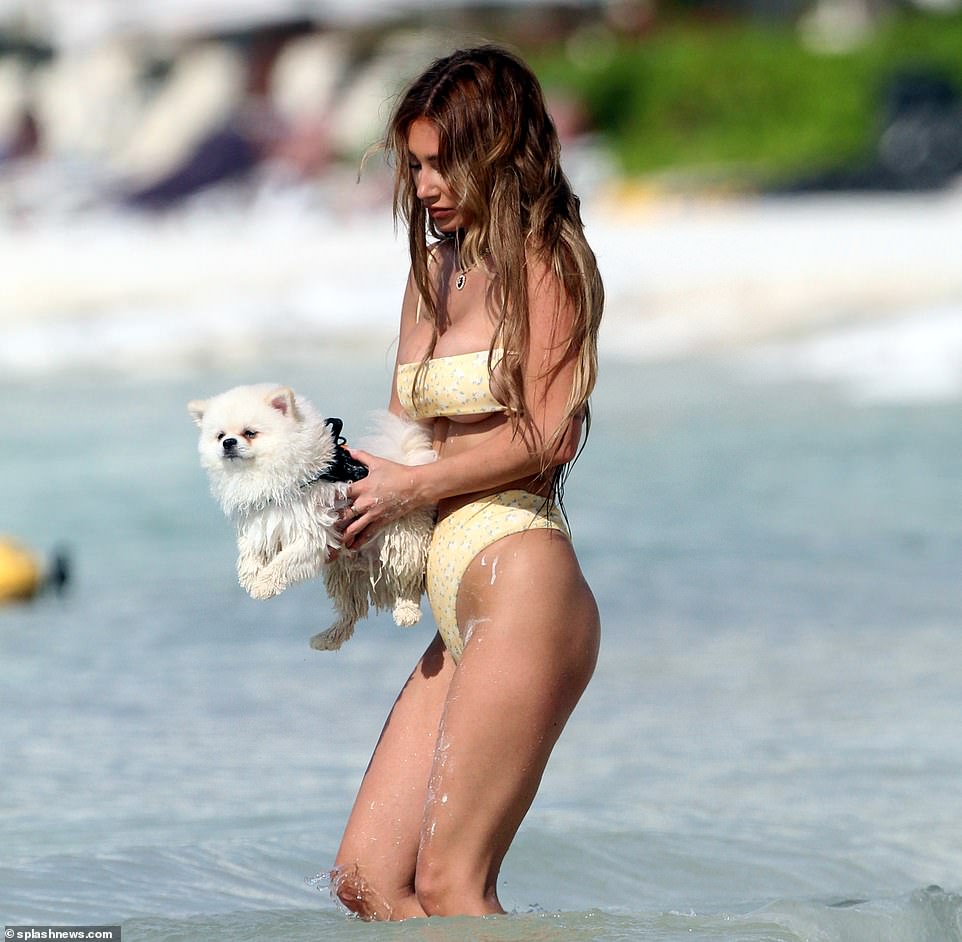 Scorned lovers: Francesca and Demi engaged in a war of words as they both spoke out about the breakup 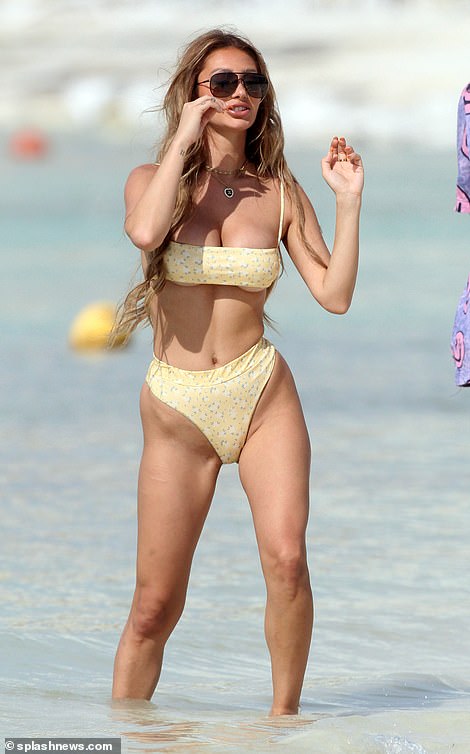 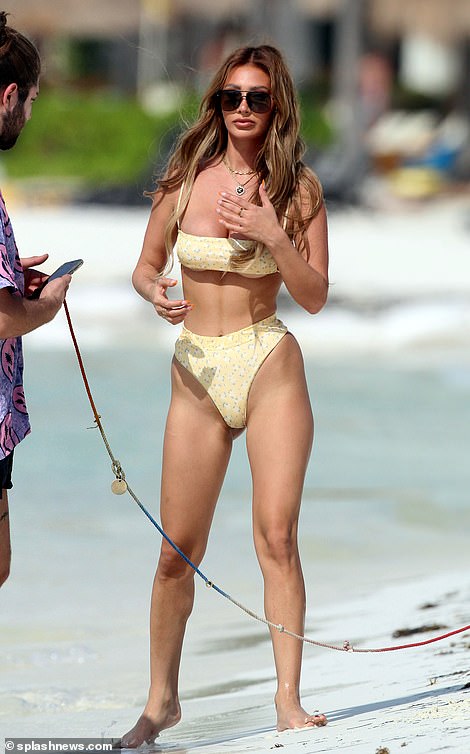 Romance memories: The last time Francesca was in Mexico she was accompanied by Sims before moving to London to be with her 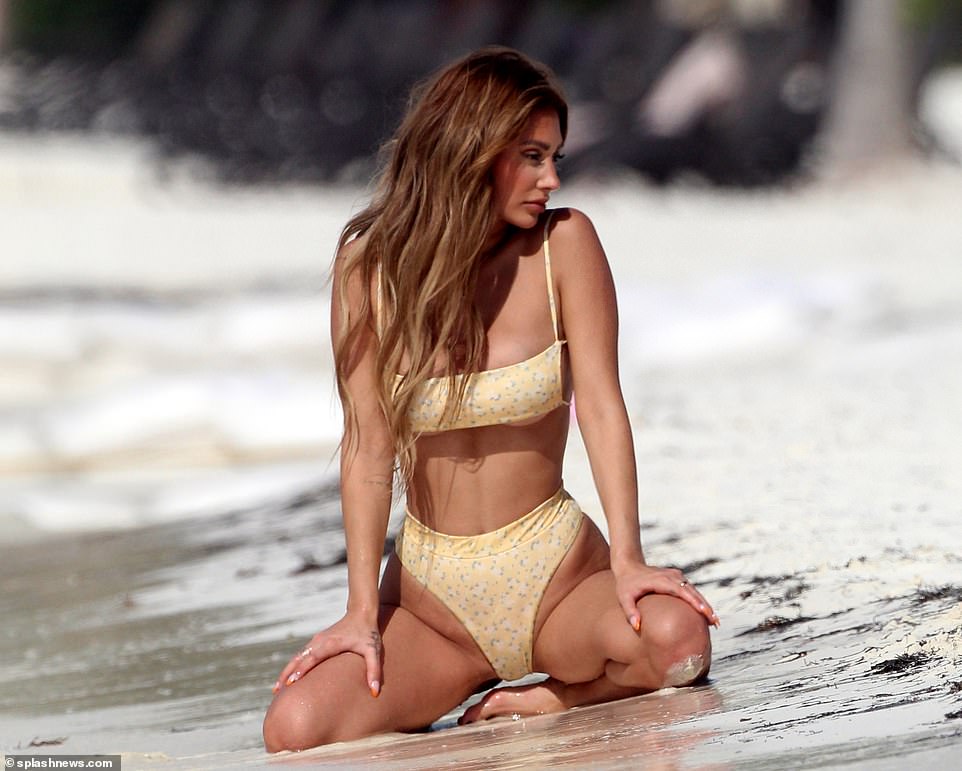 Sitting pretty: During the bustling beach day she was seen working her famed figure for the camera while squatting in the ocean

‘The video was meant to be an apology video however I feel was nitpicked at me the whole time and the apology was just thrown in there at the end to make herself feel better. As you all know there are two sides to every story. ‘

And she continued to add that she only ‘blocked’ Francesca because she found her social media to be hard to look at following their split.

‘I blocked her because she had uploaded on Instagram literally two minutes after we had broke up. Like any other normal person, you don’t want to see what your ex is up to for a while whilst you’re trying to get over it. And she was posting as normal straight after our break-up, therefore I felt hurt.’

And right after the split she and Jowsey began to talk again, with the Australian native downloading the situation on Dave Portnoy’s BFF podcast. 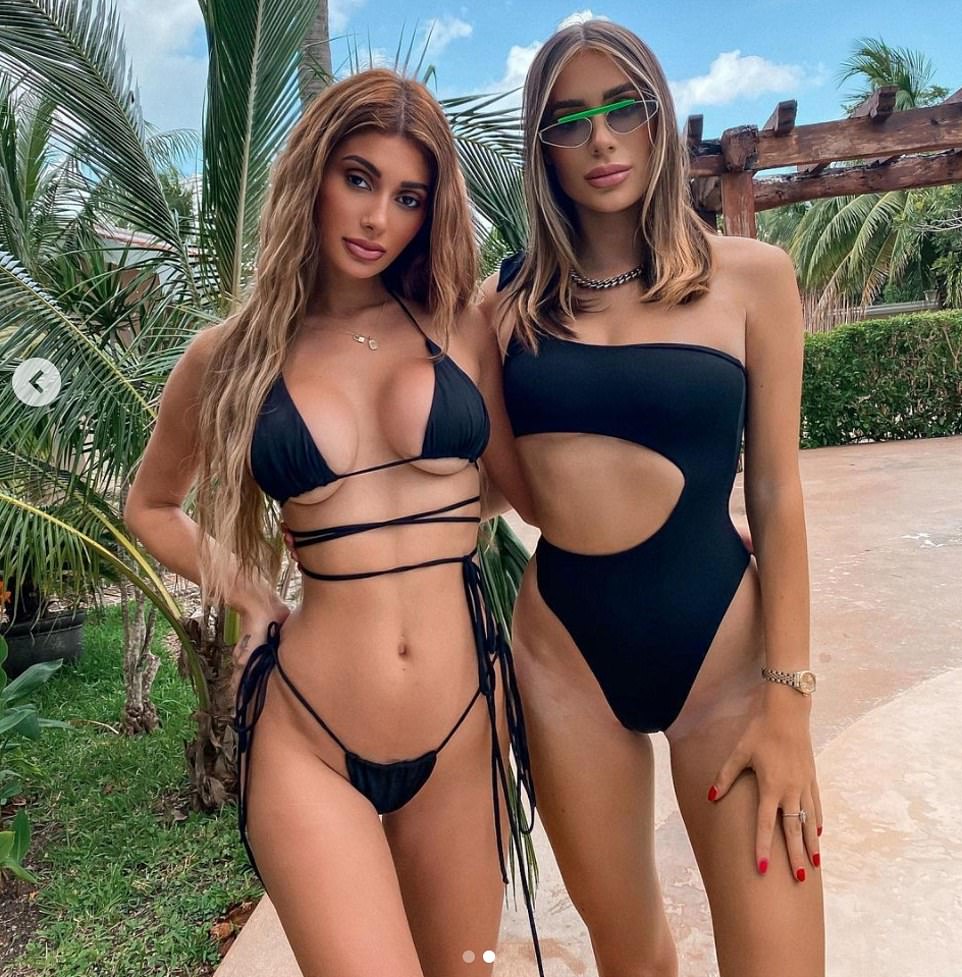 Whirlwind romance: The couple had spoken for a few weeks online before meeting in person and Demi asked Francesca to be her girlfriend after only spending three days together 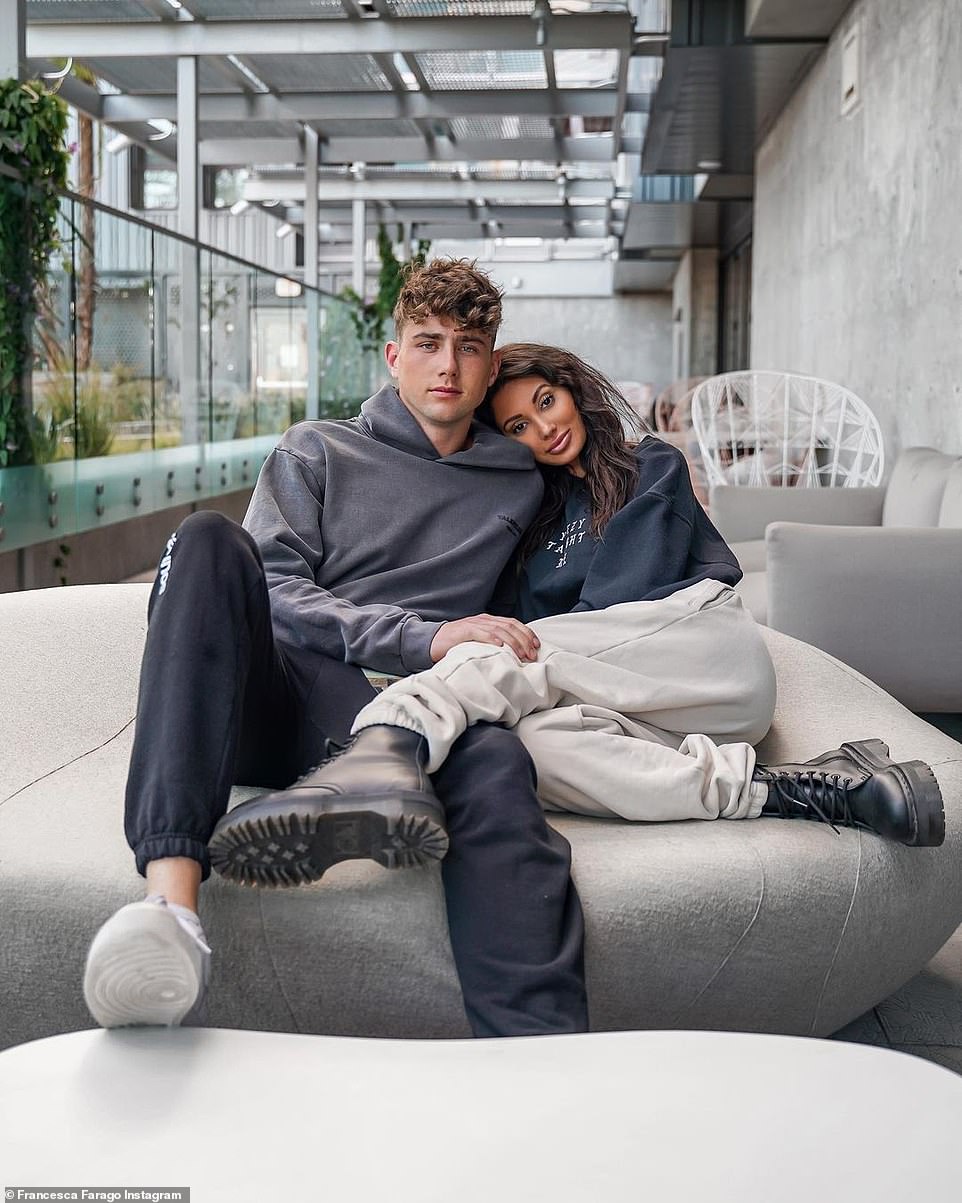 Simple gesture: Harry said on the BFF podcast that he reached out to Francesca via text after he realized the year anniversary of their Netflix show was coming up

Harry claimed that he felt compelled to reach out to his ex via text after a year had passed since they found love on Too Hot To Handle.

‘I said “hey stranger it’s been a year, I hope we can be adults moving forward. I don’t want to look back and see you as a stranger and at the very minimum I’d love to be your friend again,”‘ summarizing the text.

Jowsey continued to divulge that the flirty TikToks — which have since continued — were good for his social media views. ‘Me and my ex are kinda going at each other online which is really good for views,’ he said at the time.

And he continued to say that they weren’t ‘back together,’ during the April 28 interview, but nearly a month later the content has continued with more flirty exchanges.

On Friday May 21 the two dueted Nicki Minaj’s Chun Swae where he was seen mouthing: ‘He say he don’t want me back,’ to which Francesca quipped back with the lyric: ‘He by lyin,’ before playfully sticking her tongue out. 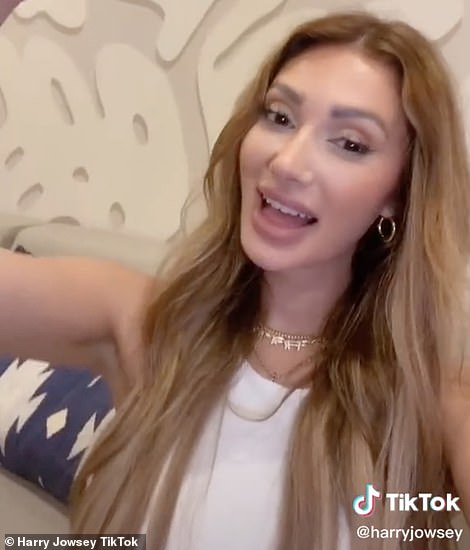 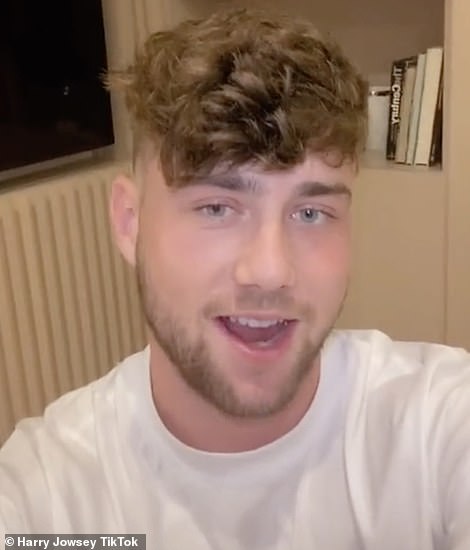 Giving it a shot? The Too Hot To Handle couple have sparked rekindling rumors after a series of flirty TikToks have been making their rounds

The two’s love story first unfolded on Too Hot To Handle and they enjoyed a long distance relationship before both moved to Los Angeles eventually.

But before being on US soil, things seemed to take a turn and the two announced last June that they had officially split, while Jowsey expressed via YouTube that he still had love for her.

Since the split Francesca has been linked to Tana Mongeau, Bella Thorne and Jersey Shore’s Vinny Guadagnino.