Paul Hogan sends a stern message to homeless outside his mansion

‘This is MY house!’ Paul Hogan sends a stern message to the homeless people outside his $4.5million mansion as he remains trapped in ‘hellhole’ LA neighbourhood but REFUSES to return to Australia because he ‘won’t survive hotel quarantine’

Crocodile Dundee star Paul Hogan has declared war against the homeless community in his crime-stricken Los Angeles neighbourhood, as he continues to bunker down in his $4.5million mansion.

The reclusive Australian actor, 81, lives in the once-desirable beachside suburb of Venice, where crime and homelessness have spiked in recent months during the Covid-19 pandemic.

A masked Hogan sent a stern warning to the less fortunate on Sunday as he was pictured pinning a note to his front door that said: ‘THIS IS MY HOUSE NOT YOURS.’ 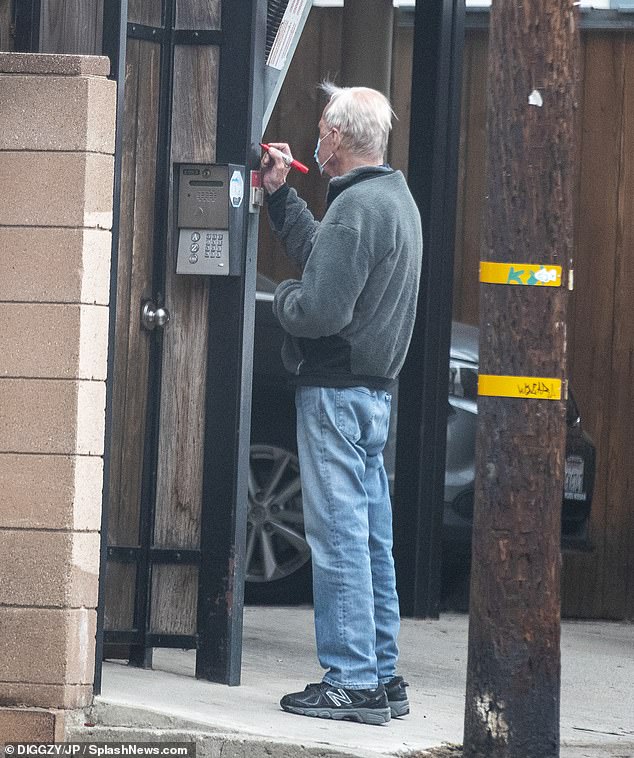 Over it: A masked Paul Hogan sent a stern warning to the the homeless community in his crime-stricken Los Angeles neighbourhood on Sunday by pinning a note to his front door that said: ‘THIS IS MY HOUSE NOT YOURS’

Hogan, who said earlier this month he was ‘desperately homesick’ and wanted to return to Australia, attached the note to his door before making his way back inside.

He was dressed casually in a pair of blue jeans, a forest green sweater and a pair of New Balance sneakers.

Later that day, he left the residence – which locals have described as a ‘fortress’ – to pick up his 22-year-old son, Chance, who also lives with him.

Hogan and Chance have been stuck inside the mansion for months amid the recent wave of crime and homelessness in the area. 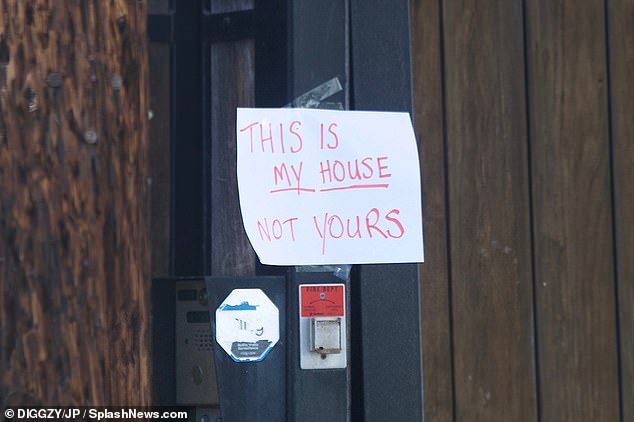 Get out: Hogan attached the note to his door before making his way back inside 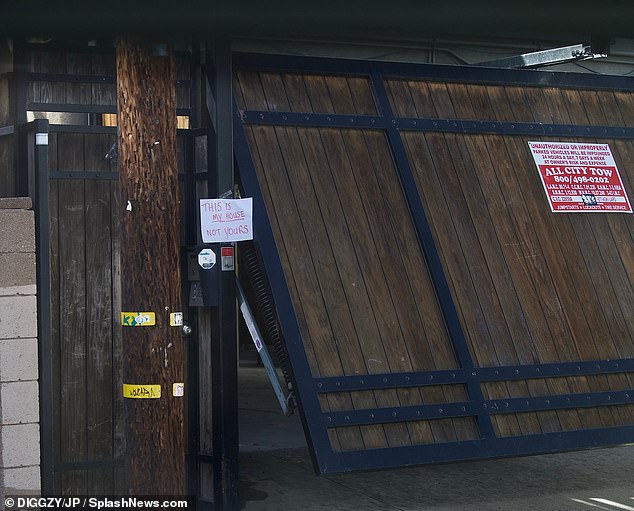 Hard to miss: The note was stuck next to Hogan’s garage door and was written in red marker

‘His house is like a fortress and it needs to be. I can see why [he] wants to move out,’ Mr Proctor added.

Hogan moved to the United States permanently in 2005, after growing up in Granville in Sydney’s western suburbs. 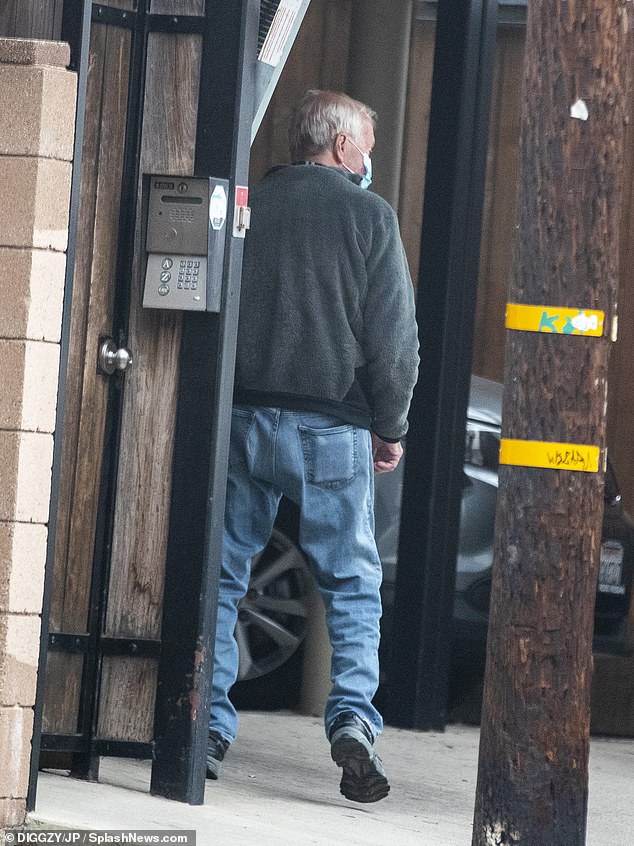 Safety first: The Crocodile Dundee star made sure to wear a protective face mask 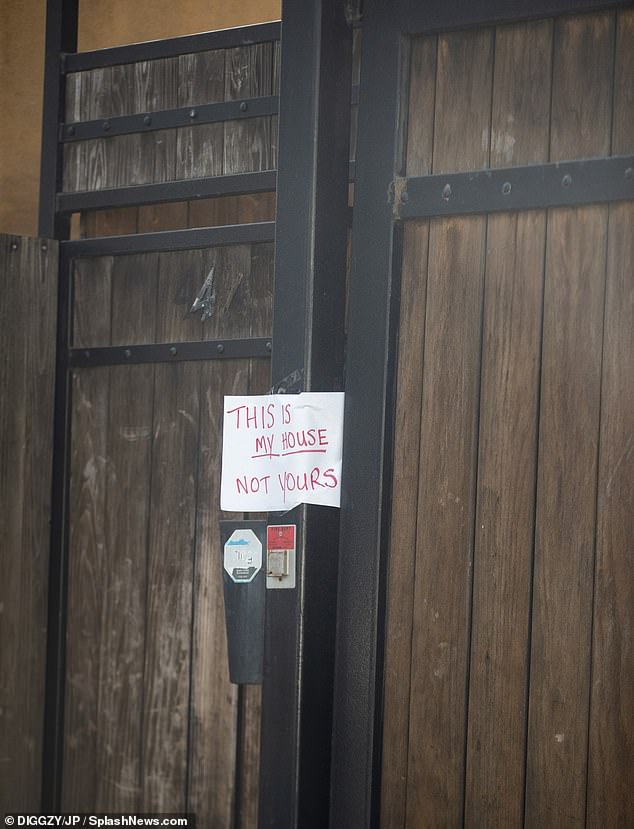 Taking aim: The note was aimed at the homeless vagrants that have taken over Venice

The Flipper star wants to return to Australia to escape Los Angeles, but has said he couldn’t possibly survive two weeks of hotel quarantine.

‘I can’t wait for this stupid disease to go away so I can get out,’ Hogan revealed on the News Corp podcast Evenin’ Viewers in October.

‘I’m like a kangaroo in a Russian zoo – I don’t belong here.’ 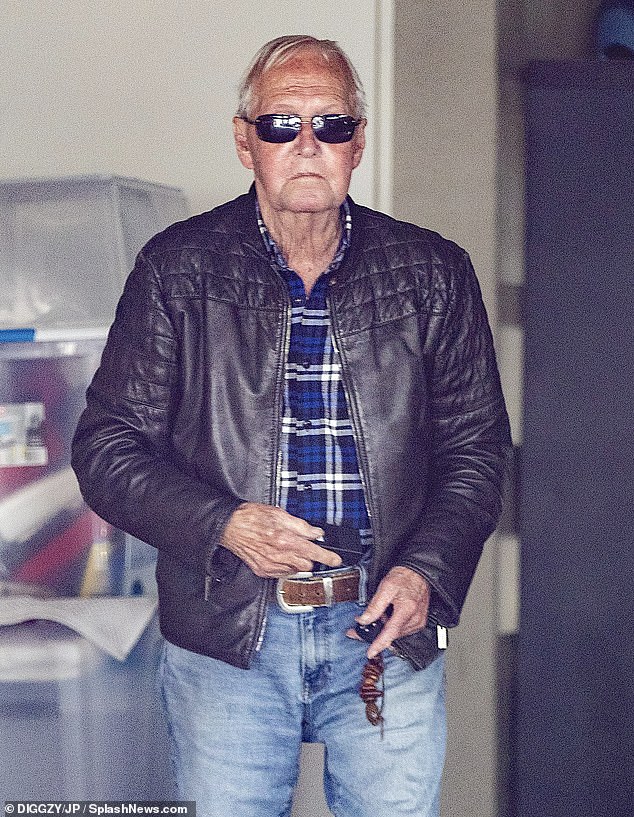 Man on a mission: Hogan later left the premises to go pick up his son Chance

During an interview with Sunrise last week, a glum-looking Hogan spoke about his miserable life in crime-ravaged LA during the coronavirus pandemic.

He revealed he was ‘desperate’ to return to Australia and leave his life in America behind.

‘I am desperately homesick,’ he said during a video chat from his home. 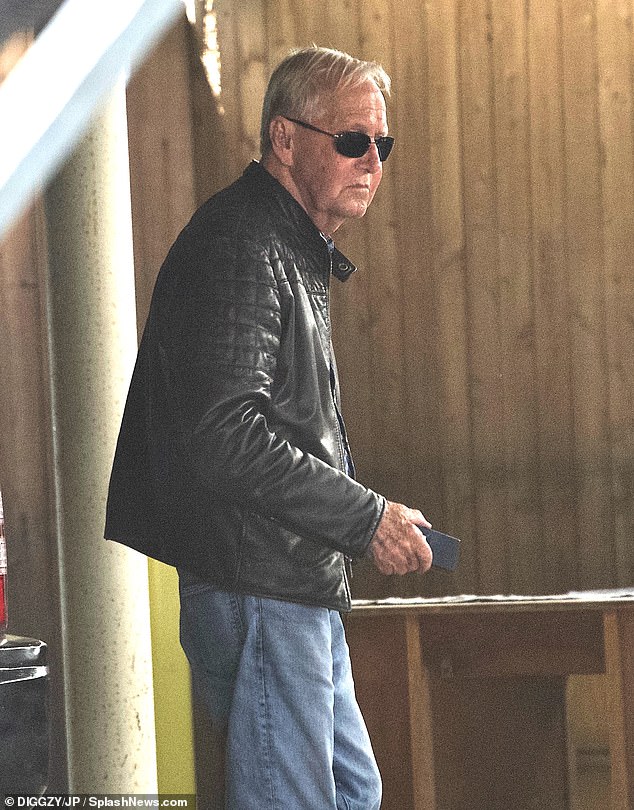 Casual: He was dressed casually in a pair of blue denim jeans and a leather jacket 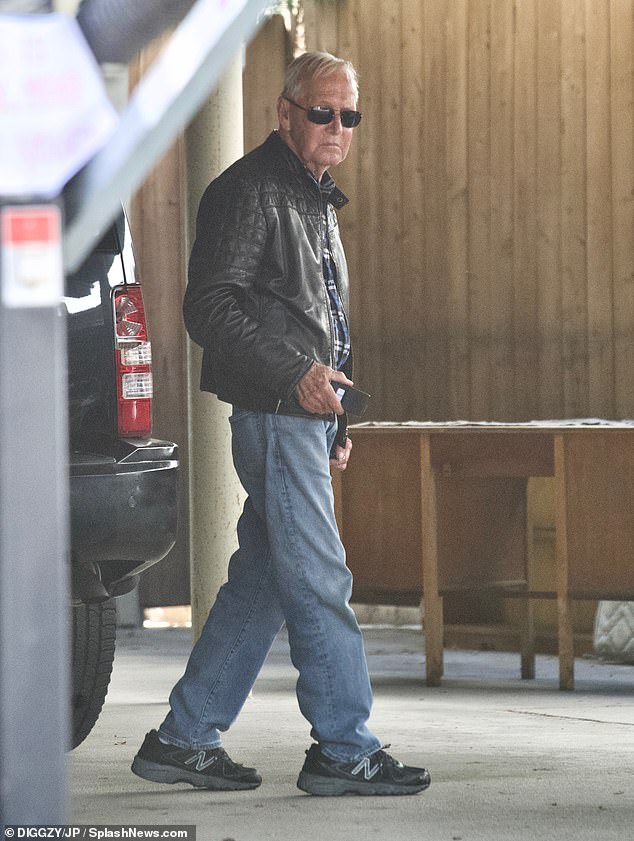 When asked how he was coping with Los Angeles’ recent crime wave, Paul simply said he ‘doesn’t go anywhere’.

‘[I’m] bored in lockdown, and the minute I can get on the plane without being locked in a hotel for two weeks, I’m back,’ he said.

However, he failed to win any sympathy from Australians when he told Sunrise hosts David ‘Kochie’ Koch and Natalie Barr he ‘wouldn’t survive’ hotel quarantine.

‘My son [Chance] would have to be with me… we’d strangle each other,’ he said. 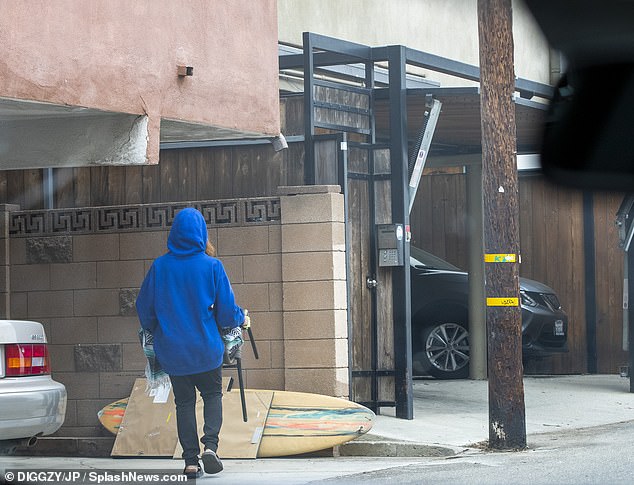 Moving: A Venice Beach local in a blue hooded sweatshirt moved a chair down the street 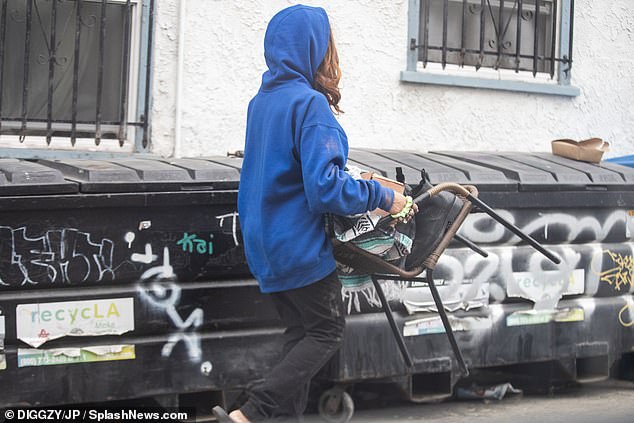 Walking: They walked past some dumpsters which were covered in graffiti 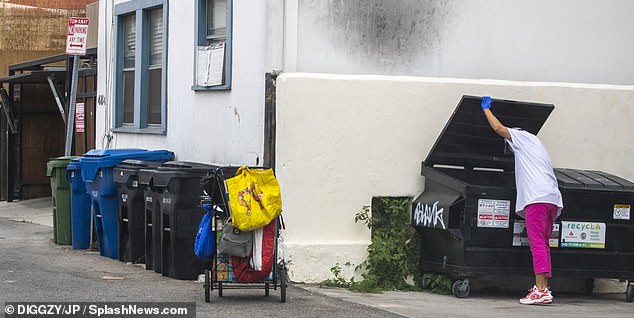 Searching: Another local checked a nearby dumpster while wearing medical gloves

Another tweeted: ‘Wants to come back but won’t do hotel quarantine. He’s not that desperate then if he won’t follow the rules.’

Over Sunrise’s Facebook page, many fans shared the same sentiments.

One furious Aussie commented: ‘Quarantine like every other human being. You’re not special.’

‘He can’t be that desperate if he won’t quarantine for two weeks,’ another wrote, while a third added: ‘He said it! Bored and sick of being locked down! That’s the only reason he wants to come to Australia.’ 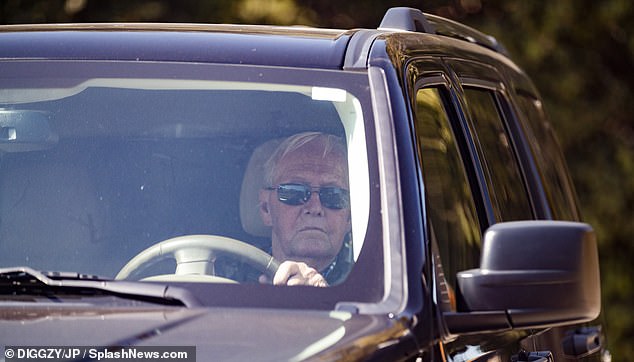 I’m outta here! Hogan had a stern expression as he drove down the street 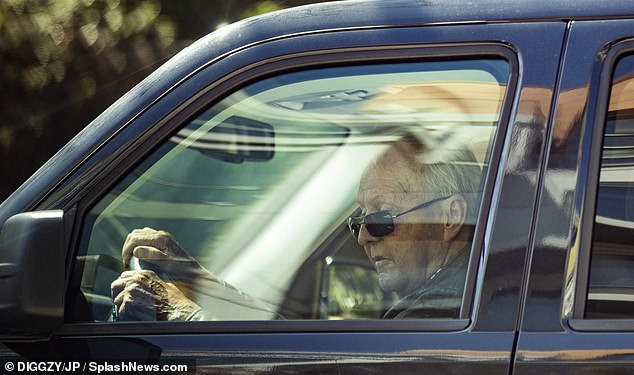 Shady: He kept a low profile by hiding behind a pair of dark sunglasses

Several viewers pointed out that Hogan had chosen LA as his home many years ago, and only wanted to return to Australia because of Covid-19.

‘He is home, he lives there, so what is he homesick about?’ one critic asked.

Another pointed out: ‘He said it! Bored and sick of being locked down! That’s the only reason he wants to come to Australia.

‘If Covid wasn’t there you would not want to come here. Stay where you are. That’s your home that you made.’ 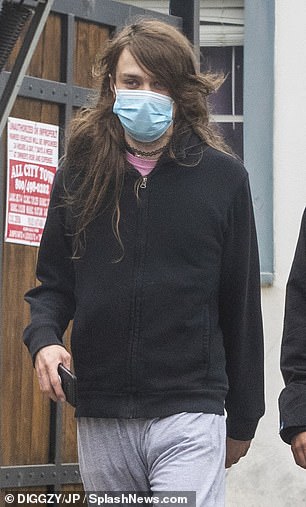 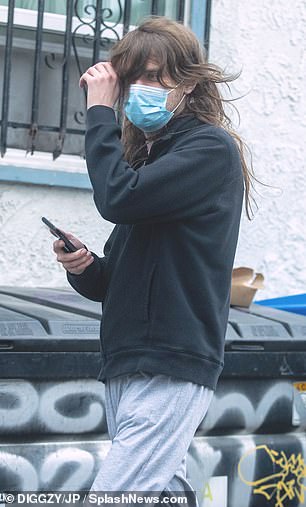 Chip off the old block! Hogan’s son, Chance, was also spotted outside the LA mansion 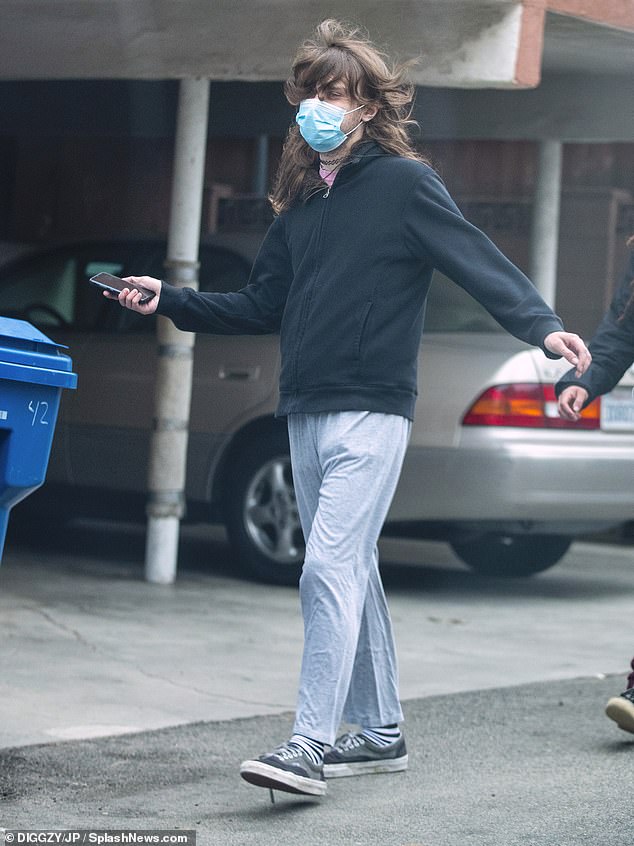 Casual: Despite his father’s wealth, Chance was dressed down in sweatpants and a jumper 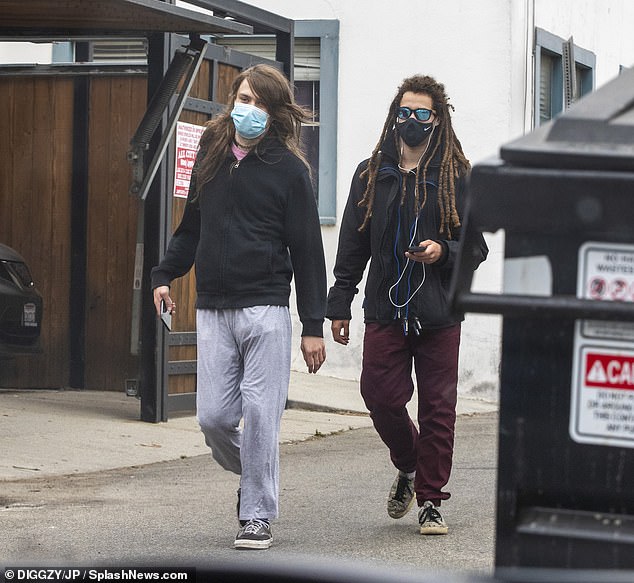 Pals: The 22-year-old was joined by a friend, who had his hair styled in dreadlocks

However, some fans sided with the ‘elderly’ actor.

‘Lot of mean people here. He is an elderly 81 year old fella obviously homesick. A bit of compassion wouldn’t hurt,’ one supporter wrote on Facebook.

‘Why can’t he come home? Every other person is flying in here! Get on a plane, Hoges,’ another added. 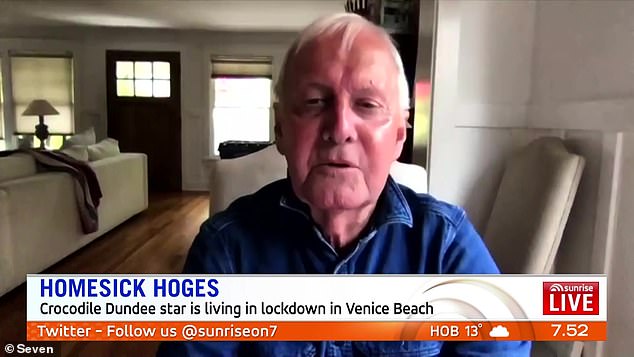 Homesick: During an interview with Sunrise last week, a glum-looking Hogan spoke about his miserable life in crime-ravaged LA during the coronavirus pandemic 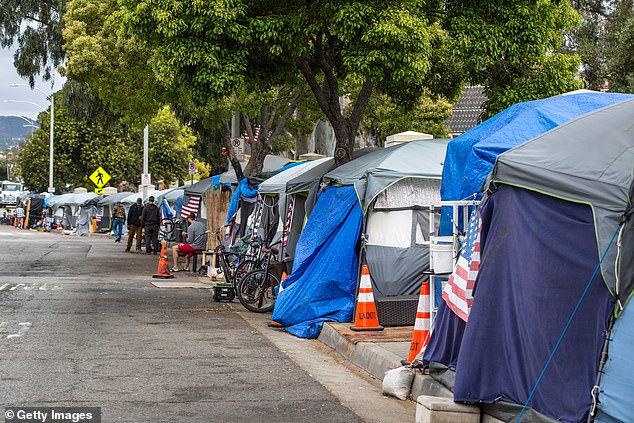 Terrifying situation: It comes as residents of Venice say soaring crime rates and the exploding homeless population have made life in the elite beachside community unbearable

Hogan lives in the once-elite beachside suburb of Venice, where a sudden increase in homelessness has resulted in a terrifying crime wave.

The world-famous beach community, 16 miles from downtown Los Angeles, has traditionally been a major tourism drawcard for the Californian city; however, now the palm trees and promenade are blighted by hundreds of tents.

‘You’re living in the country, alongside New Zealand, that’s the light of the world,’ Hogan told the presenters.

‘And I’m living in LA County, which is 10 million people and half of them have got Covid. So am I homesick? You bet your life,’ he complained. 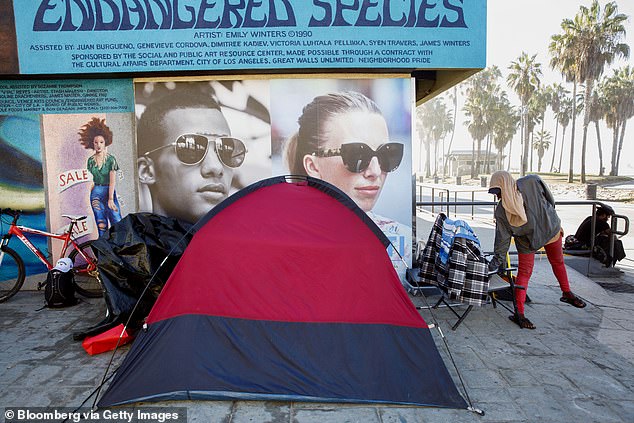 Tent city: The world-famous beach community, 16 miles from downtown Los Angeles, has traditionally been a major tourism drawcard for the Californian city; however, now the palm trees and promenade are blighted by hundreds of tents