Rebecca Lobie is no stranger to sharing raunchy photos of herself online.

And the ‘hot niece’ of late wildlife conversationalist Steve Irwin has now fans wondering whether she’s set to monetise her racy image by starting an OnlyFans account.

The 33-year-old sparked the rumours over the weekend when she uploaded a steamy Instagram photo of herself posing in skimpy white lingerie.

Preparing to cash in? Steve Irwin’s ‘hot niece’ Rebecca Lobie, 33, (pictured) sparked rumours she’s starting an OnlyFans account over the weekend after she uploaded a photo of herself taken by a popular lingerie photographer who often works with OnlyFans users

The image was taken by Tristan Manas – a Queensland photographer who often works with OnlyFans creators.

OnlyFans is a subscription-based service that allows users to sell their content online for a monthly fee, with the website claiming they can earn between $1,499 and $7,495 a month. 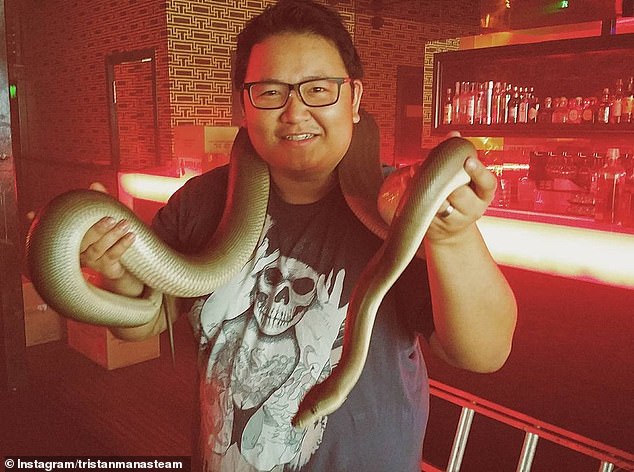 Is it a sign? The image was taken by Tristan Manas (pictured) – a Queensland photographer who works with glamour models – many of whom are OnlyFans creators

Looking good: Last week, Rebecca gave a fans a glimpse behind-the-scenes of her photo shoot with Tristan via Instagram Stories

Last week, Rebecca gave a fans a glimpse behind-the-scenes of her photo shoot with Tristan via Instagram Stories.

In the photo, the blonde bombshell was seen posing on the floor of a high-rise hotel room wearing black lacy underwear.

She explained in her caption: ‘A little behind the scenes with @tristanmanas! Who’s excited to see the pics from this shoot?’

Claim to fame: Rebecca rose to prominence in September 2019, thanks to her sexy snapshots and connection to the Irwin family

Rebecca rose to prominence in September 2019, thanks to her sexy snapshots and connection to the Irwin family.

She’s the daughter of Frank and Joy Muscillo, with Joy being Steve Irwin’s sister.

Rebecca was previously the managing director of the Irwin family’s Australia Zoo, but left in December 2015.

The zoo is now run by Terri, Bindi and Robert Irwin, who are estranged from Rebecca.

Va va voom! Rebecca has attracted quite a following on social media by regularly sharing racy photos of herself in underwear