Rihanna has once again been pictured on her Barbados vacation, days before her boyfriend A$AP Rocky’s impending arrest when they arrived back in Los Angeles.

The 34-year-old heavily pregnant star can be seen making a roadside pit-stop, showing off her huge pregnancy bump in a skimpy bikini top and skirt while embracing her rapper beau, real name Rakim Athelaston Mayers.

The pair could be seen at a local coconut stand in Barbados, as Rihanna enjoyed the fruit snack on Tuesday, just one day before the arrest.

It comes amid a new report that the Rude Boy singer was left distraught and was ‘forced to cancel her baby shower’ after A$AP, 33, was arrested in connection with a November 2021 shooting in Hollywood. 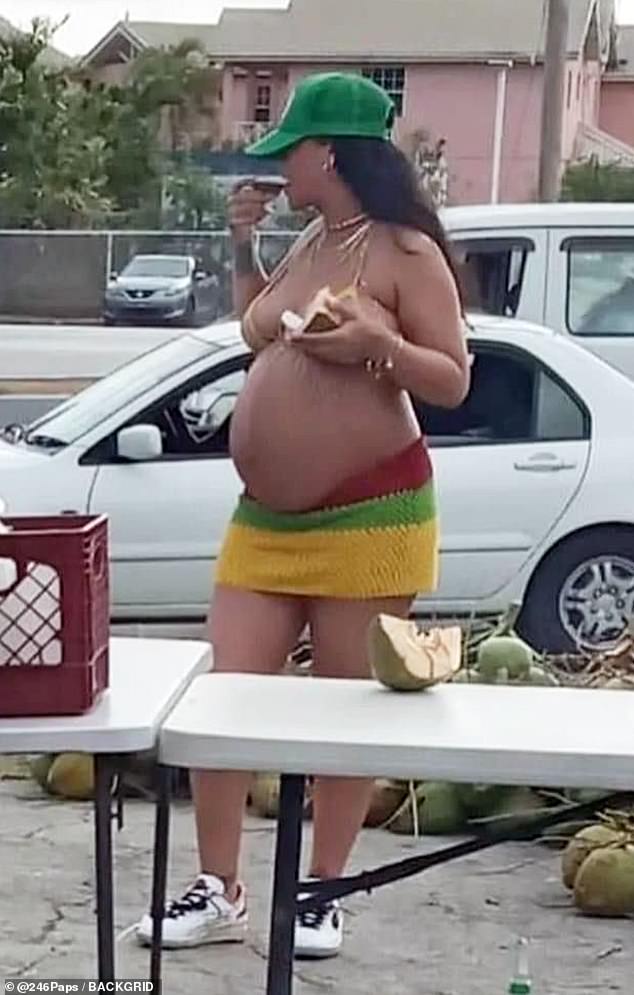 ‘Rihanna was there when Rocky was arrested and has been crying non-stop,’ a source claimed to The Sun.

‘She’s heavily pregnant and these are very serious accusations, it’s a nightmare scenario for her.’

‘It was meant to be Rihanna’s baby shower in LA on Wednesday night but they had to cancel. 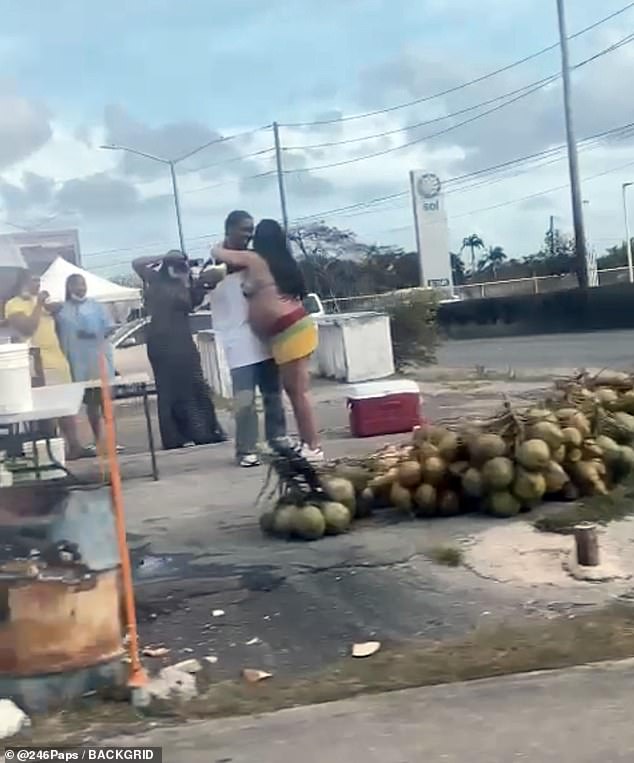 Blissfully unaware: Rihanna and boyfriend A$AP Rocky were seen at a local coconut stand in Barbados, as she enjoyed the fruit snack on Tuesday, just one day before the arrest 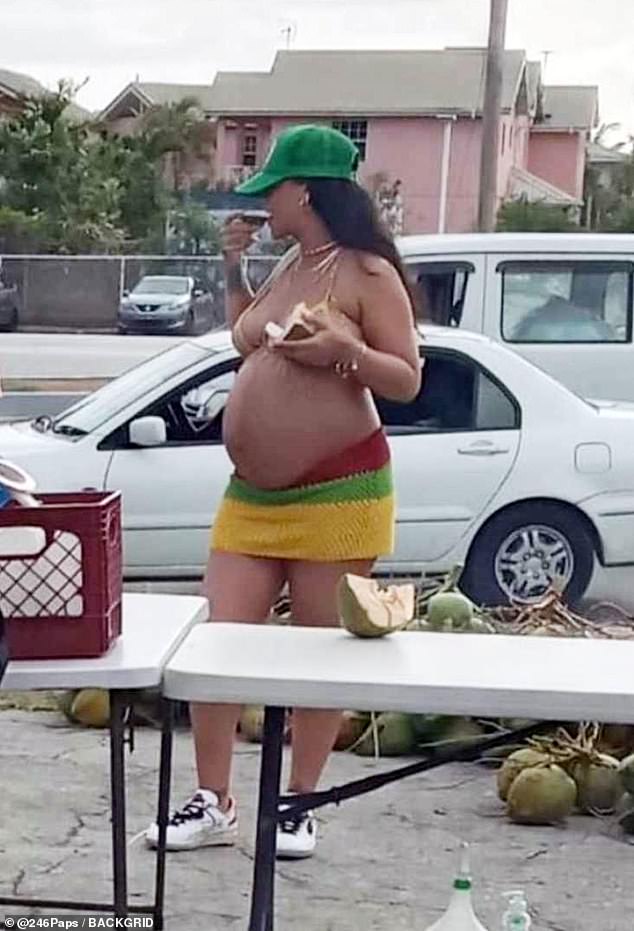 Before the arrest: The 34-year-old heavily pregnant star can be seen making a roadside stop for a snack, showing off her huge pregnancy bump in a skimpy bikini top 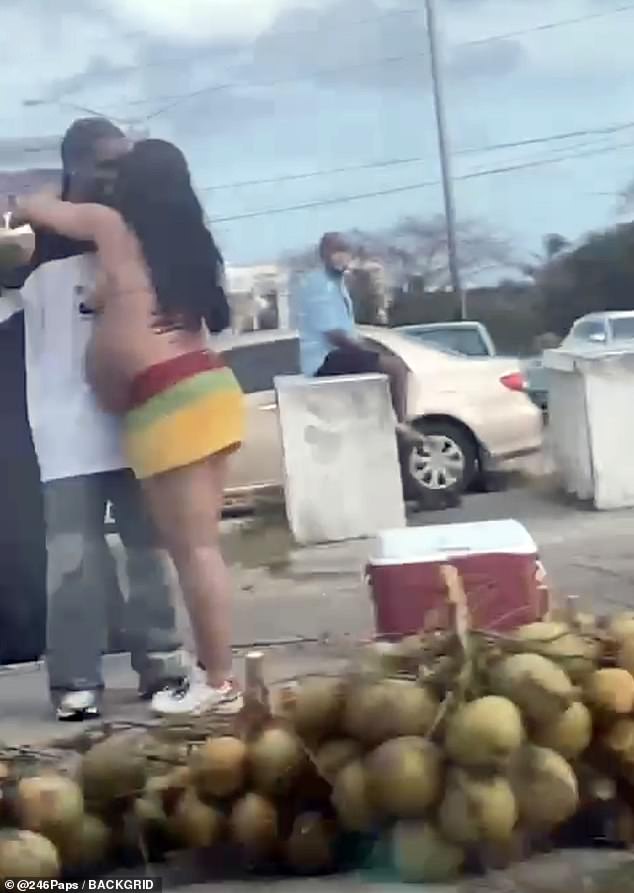 Loved up: Rihanna and A$AP looked to be in a blissful state of happiness while on their trip

The source continued: ‘Rihanna was very, very upset and stressed by Rocky’s arrest It’s not the best time for her to be on such an emotional rollercoaster.’

On Wednesday, the rapper posted his $550,000 bail and was photographed being released from a Los Angeles jail – just hours after he was arrested at LAX for allegedly shooting an acquaintance after an argument in Hollywood last year.

Police arrested the performer  at Los Angeles International Airport Wednesday morning on charges of assault with a deadly weapon. 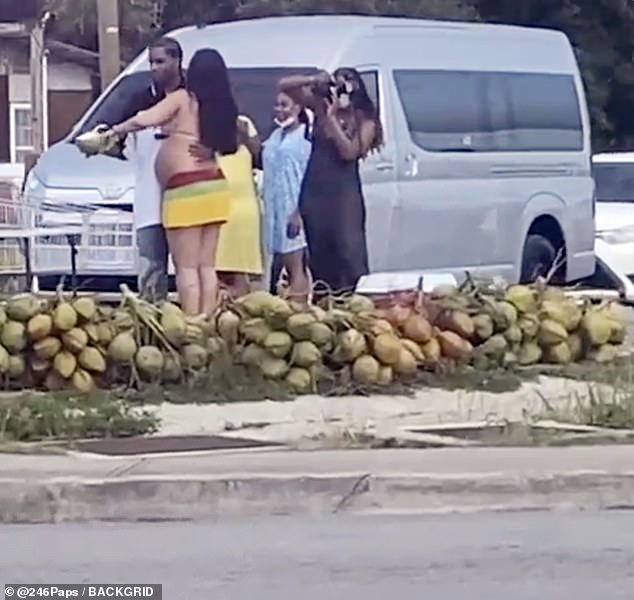 Documented: The couple were seen posing for pictures at the local coconut stand

Embrace: The couple were seen holding each other close while the made a pit stop 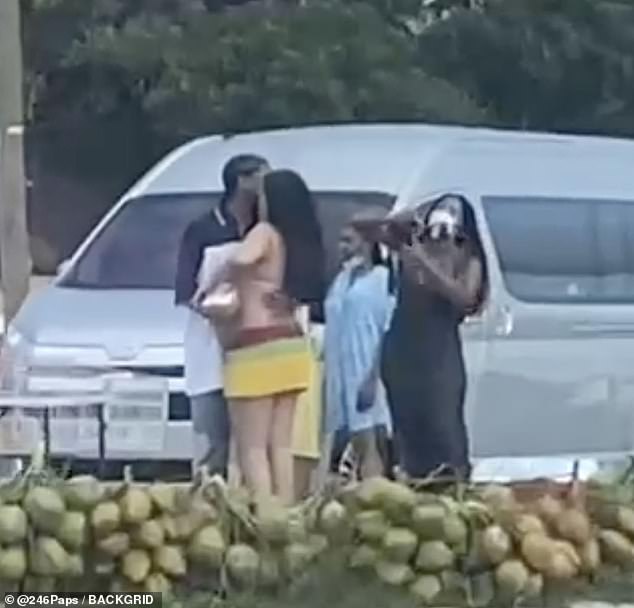 Team: The stars were flanked by members of their entourage for the trip

Officers were also seen outside of his LA home, smashing into the gate with a battering ram, before apparently raiding the property. Detectives seized multiple boxes of evidence from the house.

Mayers was taken to LAPD headquarters for questioning and was later booked. He is said to have requested the presence of his lawyers.

The soon-to-be father posted $550,000 bail and was spotted leaving jail on Wednesday evening wearing a black and white outfit and sneakers. 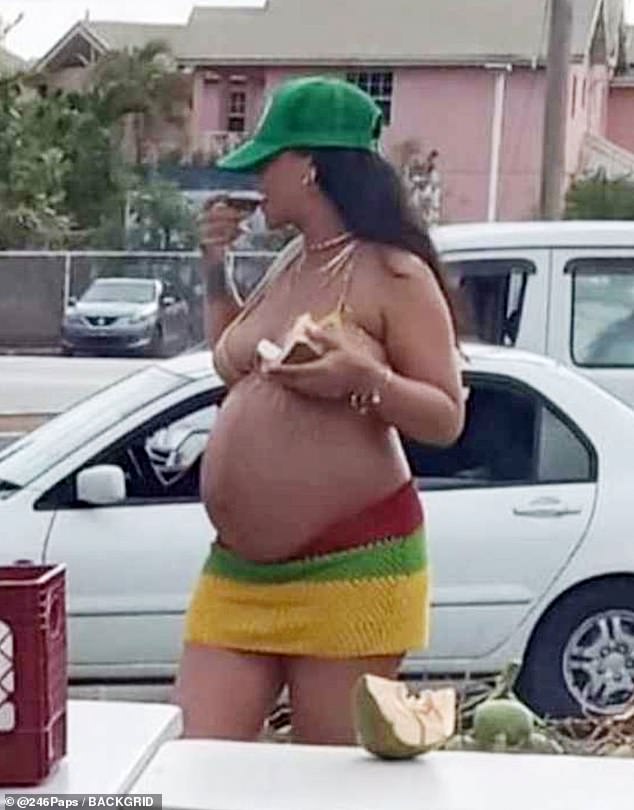 Tucking in: The We Found Love singer was seen enjoying a fruit snack on the roadside 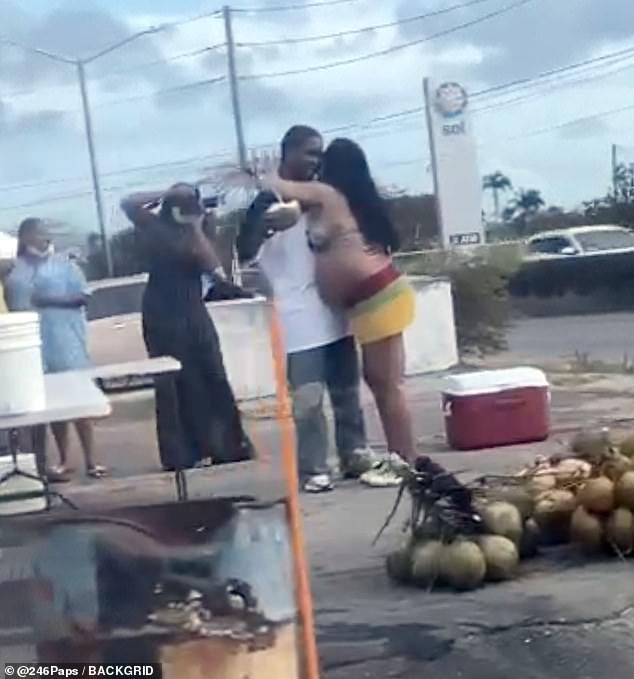 Before the storm: Just a day later, the rapper would find himself arrested at LAX 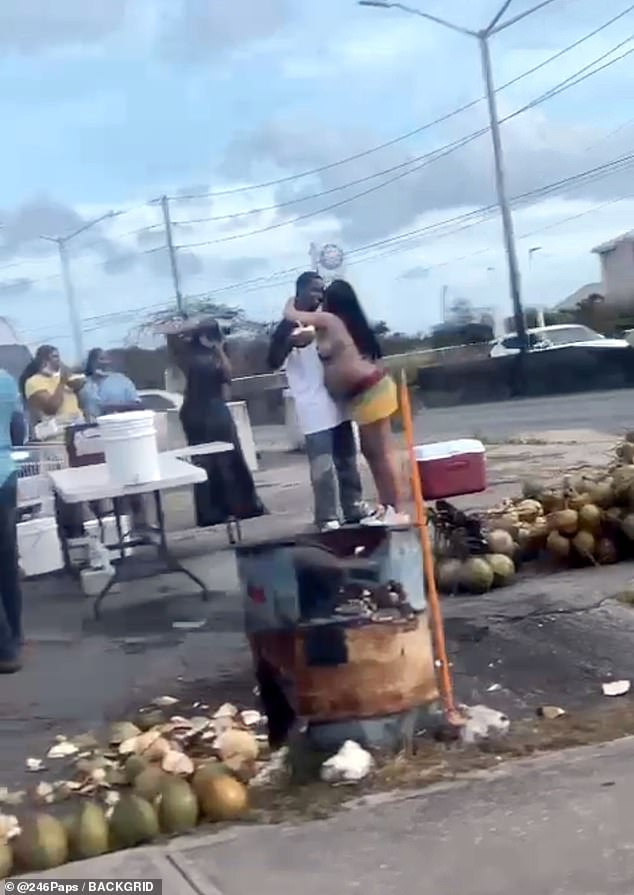 Spotted: Passers by noticed the global superstar and her man in Barbados 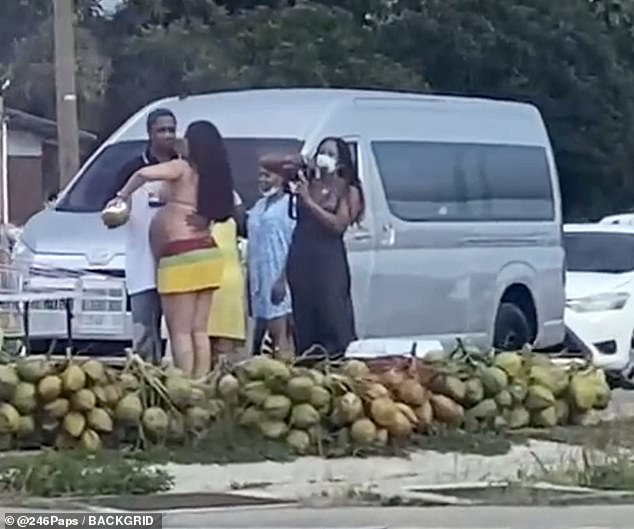 Fun on vacation: The couple had been enjoying an idyllic break together

The LAPD issued a statement saying officers ‘worked diligently’ to investigate the November 2021 shooting, which left the victim with minor injuries, and ‘identify the suspect(s) involved.’

If convicted, Mayers could face up to one year jail time, a $1,000 fine and misdemeanor probation, per California Penal Code. If he received a felony assault with a deadly weapon conviction, Mayers could spend up to four years in state prison, be fined up to $10,000 and have mandatory probation.

The rapper was arrested shortly after he arrived at LAX on a private plane, NBC News first reported. He was returning home from a vacation in Barbados with his pregnant girlfriend, Rihanna. The couple recently denied rumors of a split and cheating. 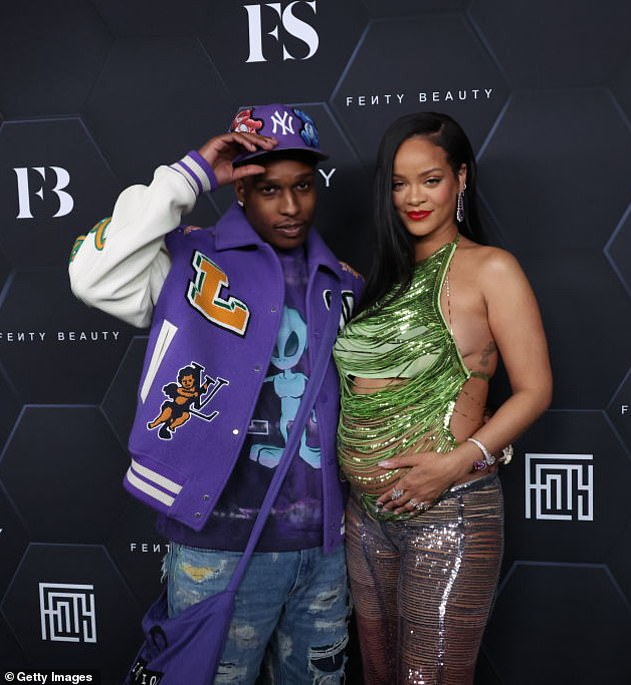 The couple’s travels came amid allegations that they had split after Mayers cheated on the pregnant singer. They have denied the cheating allegations. Mayers and Rihanna are pictured together in February 2022

Los Angeles police were investigating Mayers after a man claimed the rapper shot him in the area of Selma and Argyle Avenues following an argument.

Mayers is accused of approaching an acquaintance on the street around 10.15pm on November 6 and firing a handgun at him three or four times.

One of the bullets reportedly grazed the victim’s left hand and he later sought medical treatment. 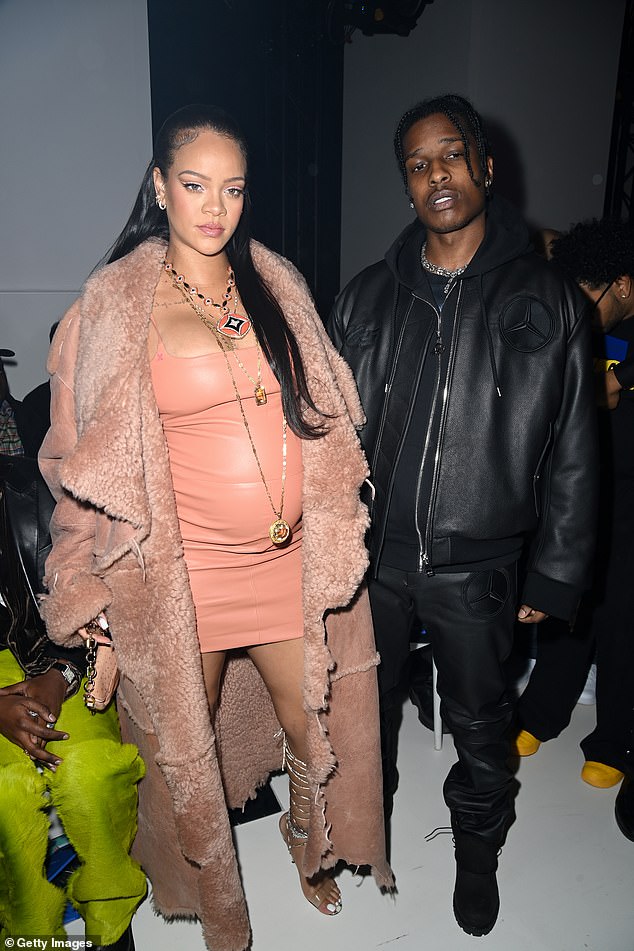 Sources allege the couple is planning to wed in Barbados sometime in the near future. Mayers and Rihanna are pictured together in February

After the shooting Mayers and two other men, who had reportedly been walking with, fled the scene.

Authorities collaborated with the victim and were ultimately abler to name Mayers as a suspect in the shooting.

Police arrested the rapper with the help of Immigration and Customs Enforcement. The case will soon be presented to the Los Angeles County District Attorney’s Office for filing consideration. 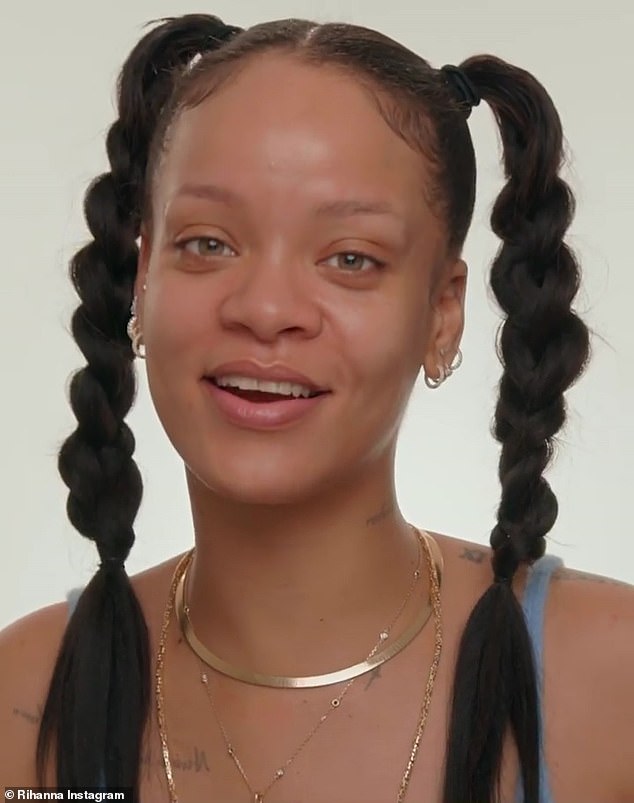 Business as usual: Rihanna didn’t let her personal problems get in the way of business, as she took to Instagram on Friday to promote a new Fenty Beauty product 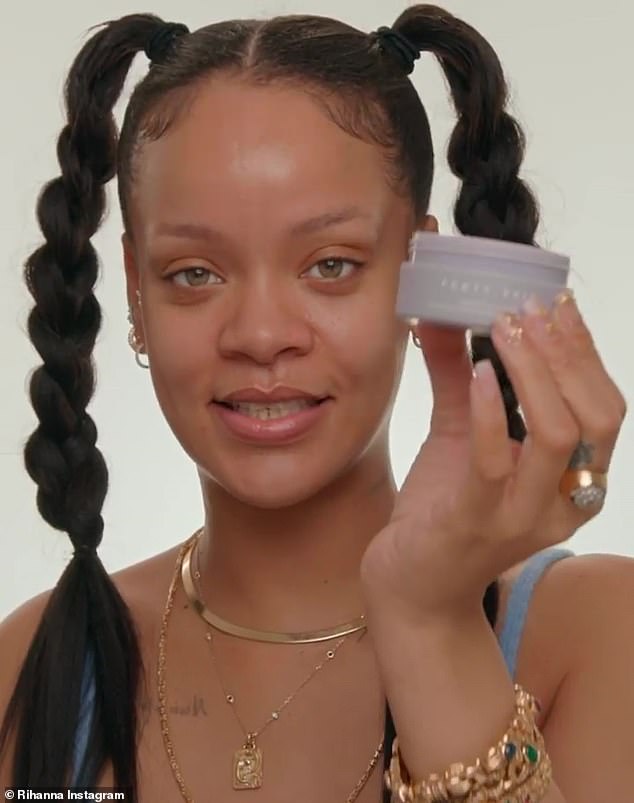 However, Rihanna didn’t let her personal problems get in the way of her business, as she took to Instagram on Friday to promote a new Fenty Beauty product.

The singer sported adorable pigtail braids as she patted her face with the violet hue product.

She called the fragrance-free mask ‘one of her new favorites’ and said she uses it on her face about twice a week.

The beauty then rinsed off the product from her visage and appeared to be thrilled with the results, which she called, ‘impeccable.’ 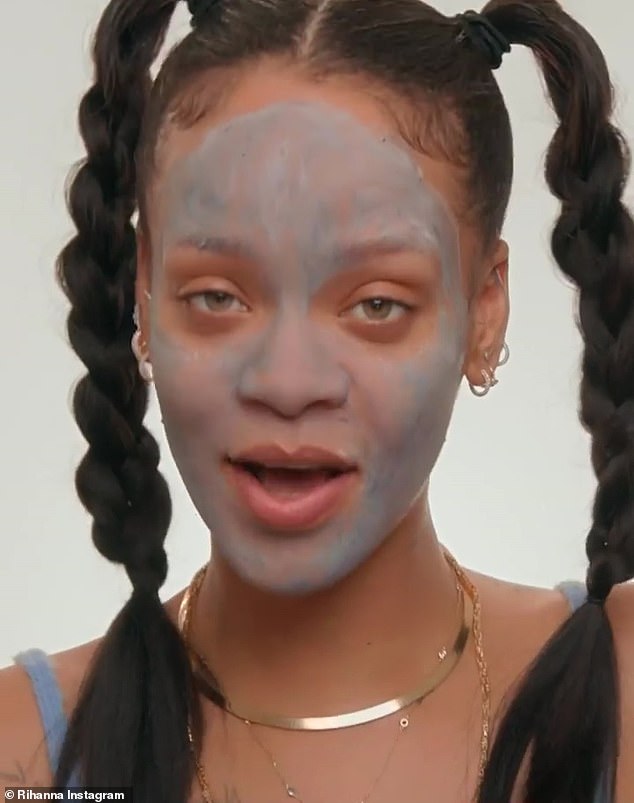 New product: The singer sported adorable pigtail braids and she patted her face with the violet hue product