Sharon Stone keeps it casual while arriving at the Tribeca Festival

Sharon Stone, 63, looks youthful at the Tribeca Festival Awards… after revealing she made little but Michael Douglas pulled in $14M for Basic Instinct

The 63-year-old actress appeared to be in high spirits as she flashed a peace sign before signing several autographs for a group of waiting fans then posing on a red carpet.

This comes after the pinup admitted she was so broke after making Basic Instinct she could not afford to buy a designer dress for the Oscars. 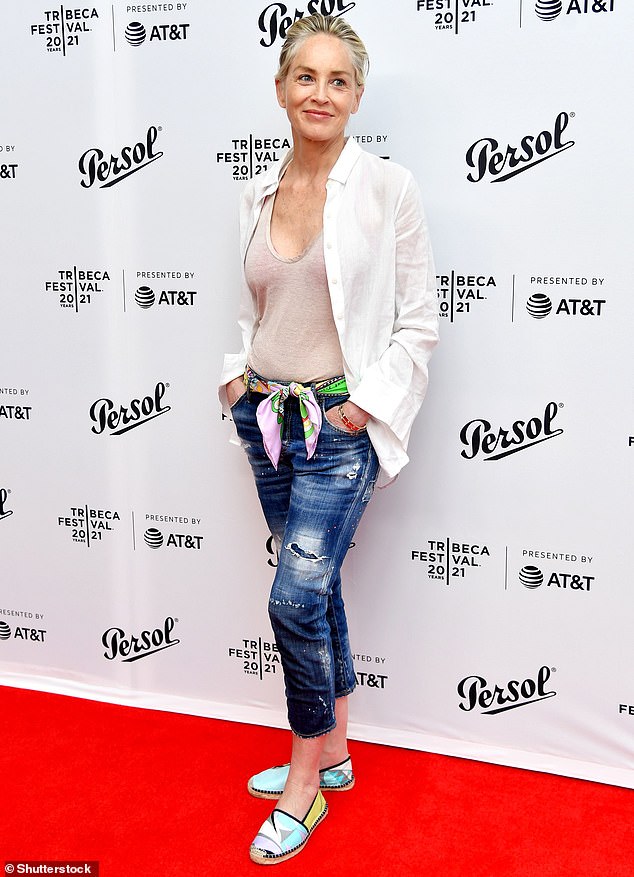 Stone cut a very casual figure as she wore a low-cut pink t-shirt underneath an open-faces white button-up while arriving at the event.

She tucked her lower layer into a pair of distressed blue jeans that were held up by a vibrantly colored sash, and she also wore a set of multicolored flats.

Her eye-catching blonde hair remained cut close to her head and was lightly slicked back as she interacted with her fans.

The actress accessorized with a stylish pair of sunglasses as she made her way around the festival.

Stone couldn’t afford a dress for the Oscars following her starring role in Basic Instinct.

The beauty shot to fame thanks to her work on the 1992 thriller but she’s recalled how she was in a ‘weird limbo’ afterwards as she became a household name but barely had any money as she was paid a fraction of the sum that went to her co-star Michael Douglas. 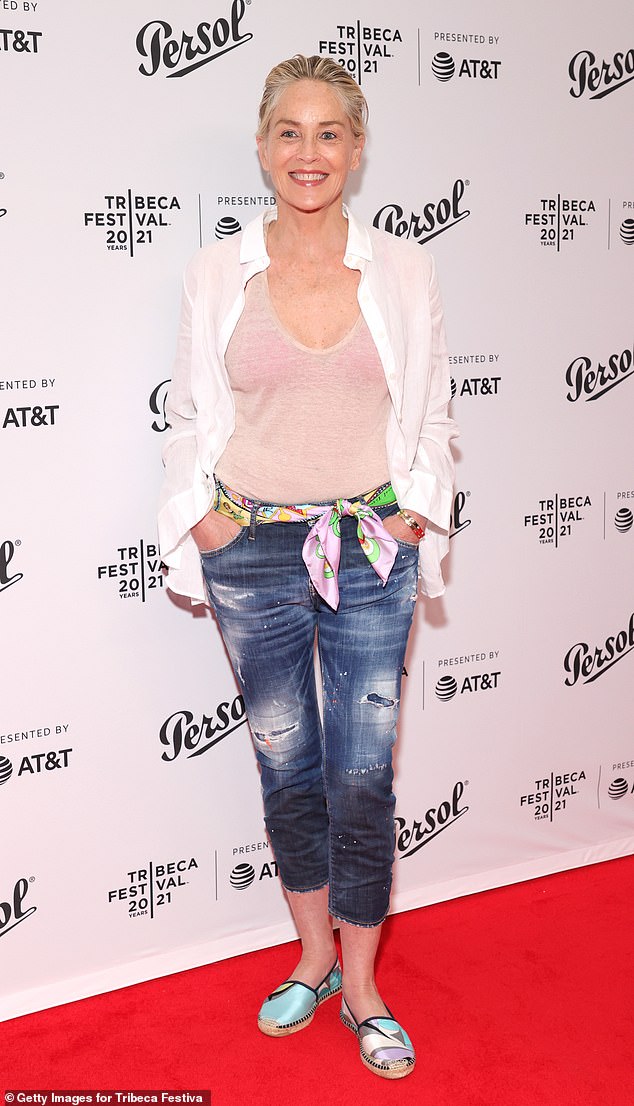 Showing up: The 63-year-old actress appeared to be in high spirits posing at the red carpet event

Speaking on CBC’s ‘Q With Tom Power, she said: ‘I didn’t get paid to do Basic Instinct. I made a little bit of money. Michael made $14 million and has points. I made not enough money to buy my dress to go to the Oscars the next year. I was in this weird limbo where I was suddenly famous, but didn’t have any money.’

Sharon didn’t reveal her exact salary but it’s previously been reported she earned $500,000 for the film.

The blonde beauty recalled how dramatically her life changed and admitted it was hard because she couldn’t pay for personal security.

Asked how her life changed when the movie came out, she said: ‘It’s Friday and you’re you. Tuesday, you’re the Beatles. People are climbing all over your car. You try to walk down the street and suddenly 30 people that were shopping are running, chasing you.’ 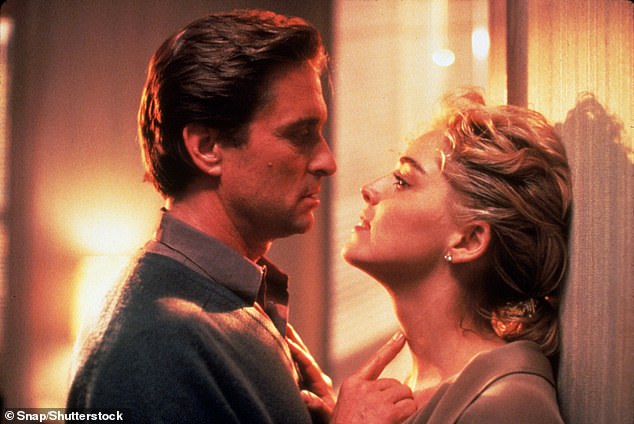 He got it all:  This comes after the pinup admitted she was so broke after making Basic Instinct she could not afford to buy a designer dress for the Oscars. Speaking on CBC’s ‘Q With Tom Power, she said: ‘I didn’t get paid to do Basic Instinct. I made a little bit of money. Michael made $14 million and has points’

And on whether she could afford private security, she admitted: ‘I didn’t have what I needed.’

A month after the movie came out, Sharon went to the Cannes Film Festival, which she branded ‘insanity’ and revealed all her belongings were stolen.

She said: ‘I got back to the hotel and all of my belongings had been stolen except the clothes on my back. My contact lenses, my film out of my camera, my toothbrush — everything was gone.’ 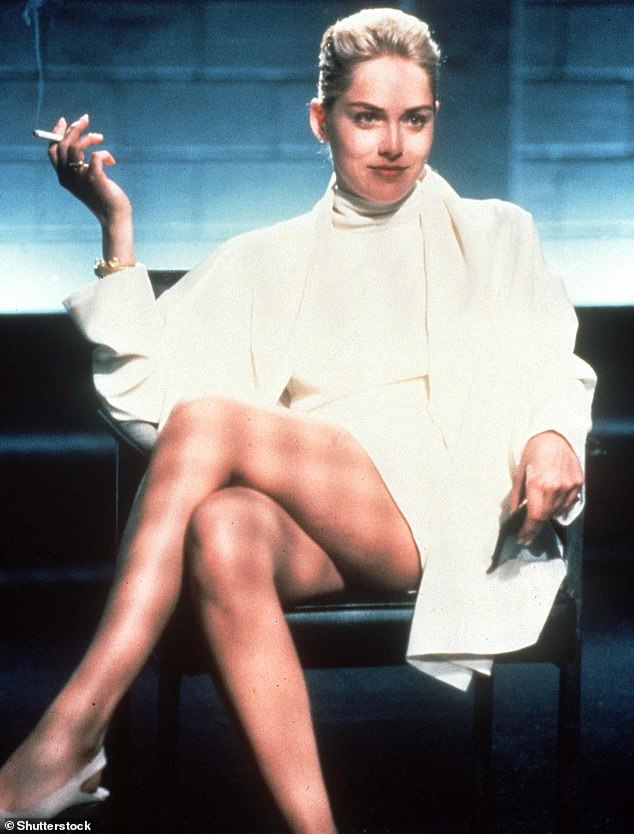 Small fee: ‘I made not enough money to buy my dress to go to the Oscars the next year. I was in this weird limbo where I was suddenly famous, but didn’t have any money,’ she added

And hotel staff had to improvise when it came to getting her out of the building without security.

She explained: ‘The bodyguards got all the kitchen staff and all the busboys to come up and they created this big circle that I and my two girlfriends were inside of and then they try to take me through the lobby.

‘There were so many people, hundreds of people, pulling at us and going berserk. So this was our introduction, “Hello, you’re famous.” We had no idea.’ 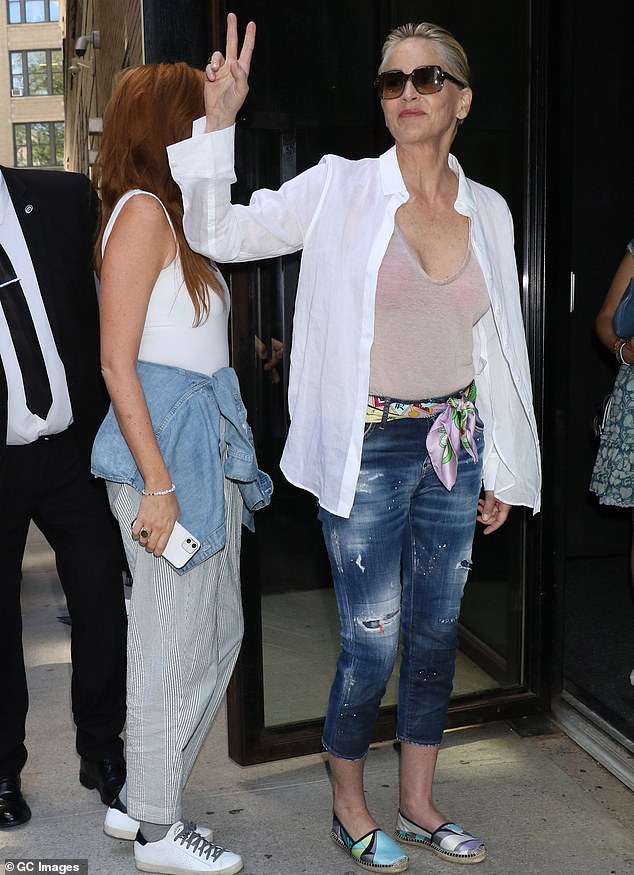 Sharing the love: The much-celebrated actress was pictured flashing a smile as she signed autographs for a group of her waiting fans

The star was desperate to speak to someone about her situation, so her chiropractor arranged for Shirley MacLaine to call her and they arranged to meet. She said: ‘I drove out to Malibu, and we had dinner on trays sitting on the floor in front of her fireplace. I’ve never been so happy in my life to have someone understand that I needed to be on the floor. I needed that feeling of being grounded. I needed someone who understood that I needed to sit on the floor, and be in my bare feet, and just have someone talk to me like a human being.’

Stone is currently involved with two film projects that are set to make their respective debuts in the near future. The Golden Globe-winning actress will appear in a supporting role in the upcoming drama-romance feature Beauty, which was helmed by Andrew Dosunmu. The forthcoming flick follows a woman who finds it hard to strike a balance between her identity and her voice after being offered a high-paying record contract.

Also set to appear in the feature are Giancarlo Esposito, James Urbaniak and Niecy Nash, as well as rapper Joey Bada$$.

Production on the film was completed in the summer of 2020, and it is set to be released on the Netflix streaming service sometime this year. 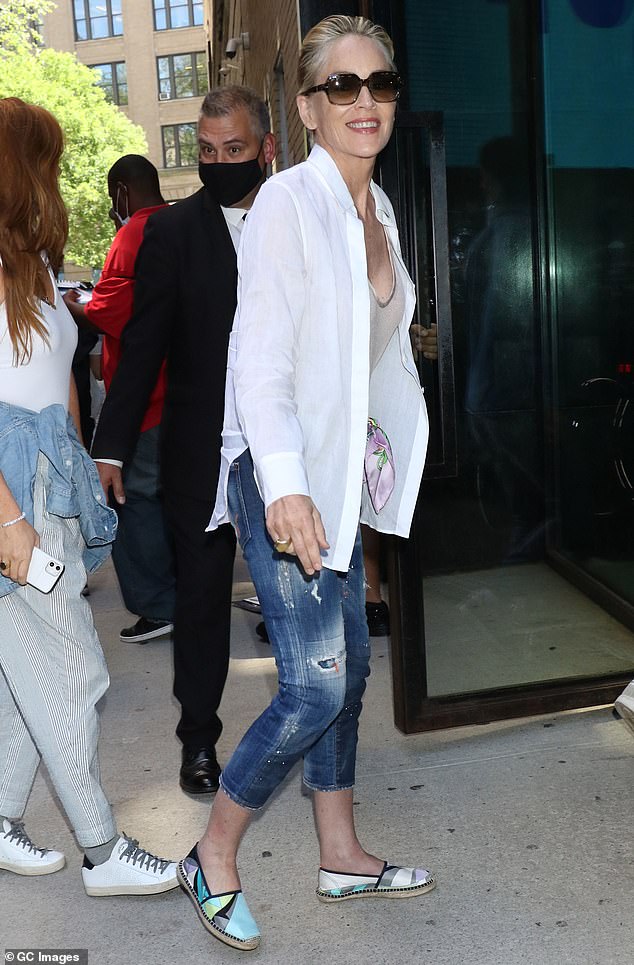 Taking it easy: The Oscar-nominated performer wore a t-shirt and a pair of distressed blue jeans during the event

Stone is also set to appear in the forthcoming romance feature, What About Love.

The upcoming film is centered around two sets of parents who follow the example of their respective children in finding their own reasons for staying together.

The Casino actress will share the screen with performers such as Andy Garcia and Jose Coronado in the flick.

The forthcoming movie entered production several years ago, and production had wrapped by the beginning of 2019.

Although it was originally expected to arrive in 2020, What About Love is currently scheduled to be released to the public in February of 2022. 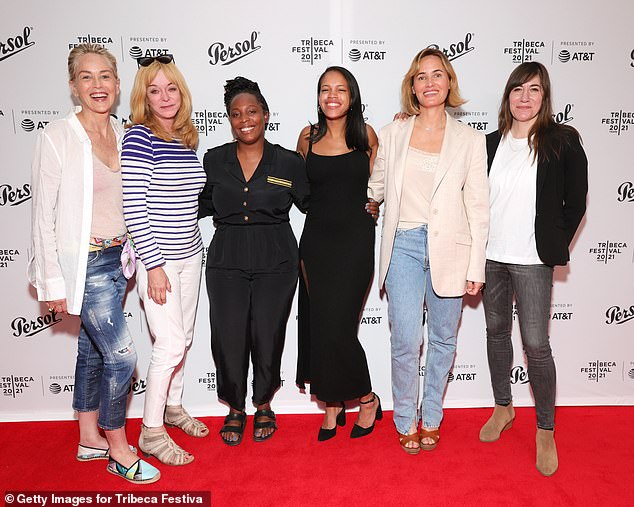 Ricky Gervais Gets Use to Doing Nothing Thanks to COVID Pandemic