Home » Celebrities » What Health Issue Is Alec Baldwin Suffering From?

What Health Issue Is Alec Baldwin Suffering From?

Alec Baldwin is coming clean about an issue he’s recently been facing to encourage more people to open up about their mental health. On the latest episode of his new podcast, “What’s One More,” which he hosts with wife Hilaria Baldwin, the “30 Rock” star shared that his Obsessive Compulsive Disorder symptoms have severely increased.

Back in 2017, he candidly shared with NPR a look into his experience with OCD and how the symptoms became “crippling” to the point where he couldn’t leave his apartment without making sure everything was in check. While recounting an incident where his driver was waiting downstairs to take him to the airport, he said he’d “be making sure that all the books were stacked neatly on the table in the entry hall of my apartment,” or “I’d be sitting there literally with my thumbs squeezing the books so all the seams were right and the books were stacked just so.” Baldwin, 63, shared that whoever was the primary person in his life would look at him like, “You’re kidding, right? You realize we’re going to miss the flight.'”

Speaking with Howie Mandel, who has a history of OCD as well as anxiety and depression, Baldwin discussed his experience and thanked the “America’s Got Talent” judge for helping fight the stigma surrounded by the disorder.

Hilaria Baldwin applauded her husband for discussing his mental health 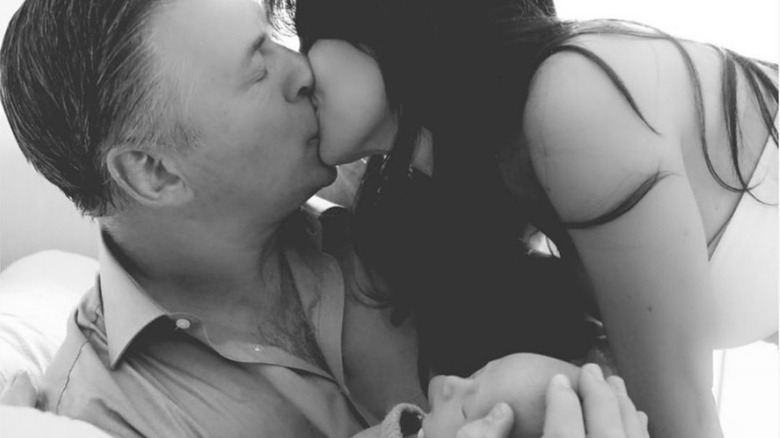 In a new podcast episode, Alec Baldwin shared that he’s “really seriously” dealing with OCD symptoms at the moment. Looking to Howie Mandel for advice, the father of six shared that he is “grateful to Howie for opening up at a time when few people were talking about this publicly, and there was even more of a stigma about OCD and mental health than there is today.” He hopes to work “through empathy, understanding and being kinder to one another” to “change the narrative” surrounding the disorder (via People).

During their conversation on “What’s One More,” Hilaria Baldwin revealed that OCD has become a “very personal” issue for her family and they are “learning that by being open about our challenges, we find a community where we realize we are not so alone, and we can be a part of paving the way for more people to seek help.”

After the positive response the episode received, Hilaria took to Instagram to thank her husband for sharing his experience. She wrote, “It was through opening up about my miscarriages with you that I learned the healing power of: I’m not in this alone. I’m proud of you, Alec, for having the bravery to do the same with your struggles with OCD.”

If you or someone you know is struggling with mental health, please contact the Crisis Text Line by texting HOME to 741741, call the National Alliance on Mental Illness helpline at 1-800-950-NAMI (6264), or visit the National Institute of Mental Health website.