Mother who feels so terrorised by her teenage son, 15, that she wants to end her life begs police to arrest him on 999: What’s Your Emergency – as viewers claim she should be able to smack him to control him

A mother revealed she felt so terrorised by her son that she wanted to end her life as she begged police to arrest the teenager on 999 What’s Your Emergency last night.

Last night’s episode of the Channel 4 show focused on the shocking crimes of Sheffield’s teen tearaways – which included cops responding to a report of a 15-year-old harassing his mother and smashing up her bedroom.

The anonymous woman begged police to arrest her son on the programme, telling the officers the out-of-control boy had become so violent she was ‘willing to end her life.’

Many viewers were left stunned by the programme and conflicted over the way parents should most effectively discipline their children, with one commenting: ‘Parents have had control taken away from them. No longer allowed to smack our kids and frowned upon for harsh punishment. This is the result.’ 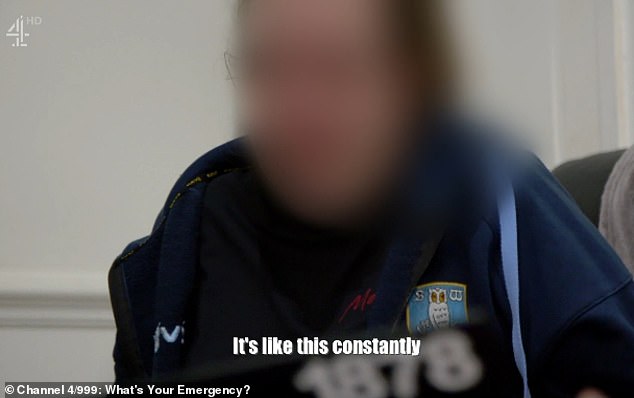 An anonymous mother, from Sheffield, revealed she felt so terrorised by her son, 15, that she wanted to end her life as she begged police to arrest the teenager on 999 What’s Your Emergency last night 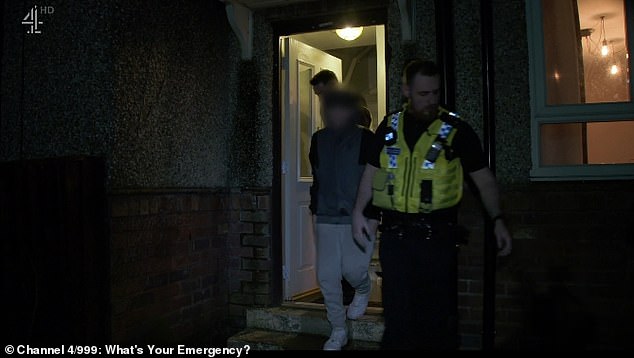 Police officers were wary about arresting the teenager, but his mother insisted his violent behaviour had been a last straw

Another wrote: ‘Parents are scared, kids think they are entitled to get what they want. Back in the day you get a smack or grounded, you can’t do that today. It be abuse. No wonder parents call the police.’

Call handler Sarah Birch explained: ‘We get so many calls from parents who are desperate for our help.

‘I’ve got a teenager, it’s an absolute nightmare. They think you’re wrong, they’ve got an answer for everything.’

Her colleague Megan Parker added: ‘Boredom plays a part, they don’t know what else to do so they think, “Oh we’ll go on the street and throw some rocks.” 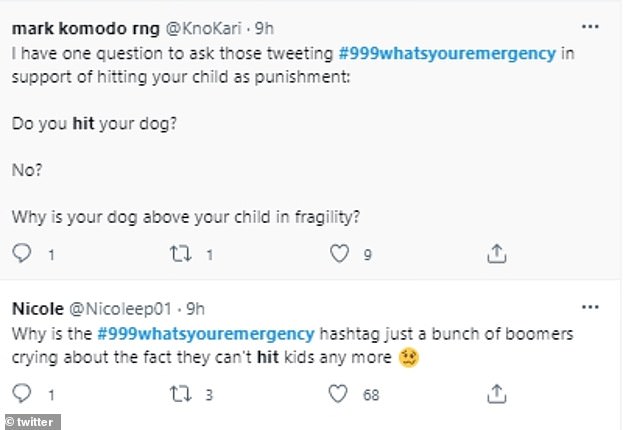 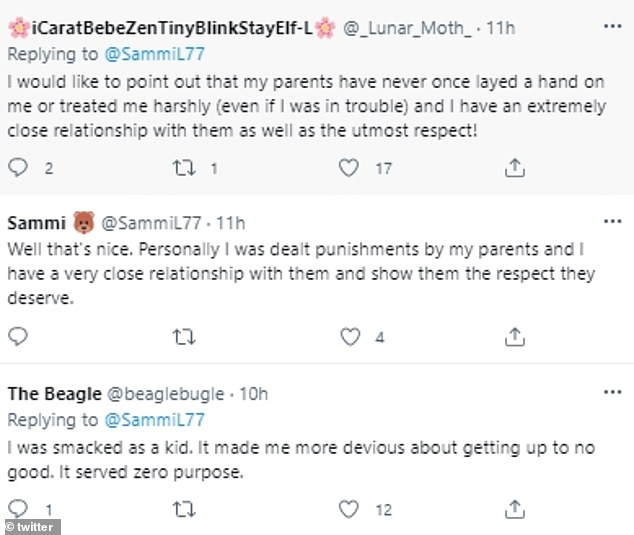 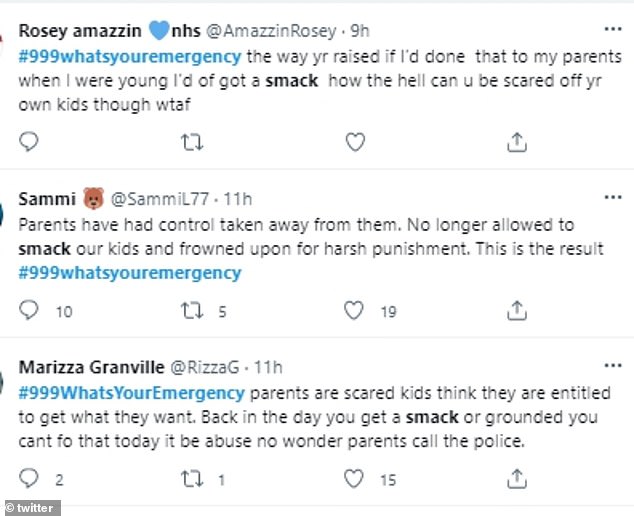 ‘When you’re a teenager you do push boundaries. You don’t have anything to lose, you still live at home, you think, “why not?” It’s a natural part of growing up.

She continued: ‘Kids these days don’t have any respect for their parents any more.’

Terry Batchelor suggested parents being terrorised by their children had become a ‘much larger issue’, saying: ‘Parents scared of their child, they don’t know how to handle them or know what to do.’

PC Tom Casserly added: ‘We go to incidents like this a lot. When I joined the police, this isn’t what I had in mind. You see more and more parents losing control.’ 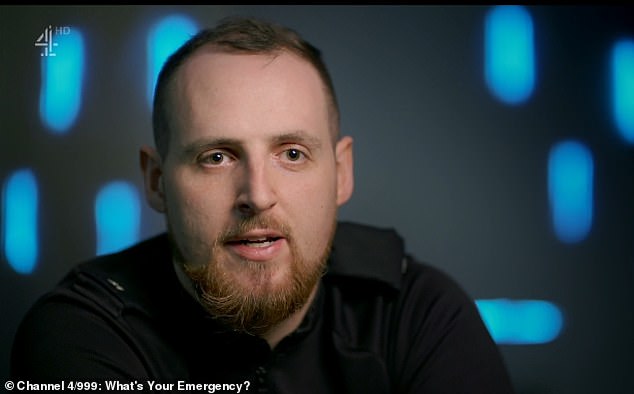 During the programme, PC Nathan Warrilow said he initially felt ‘angry’ that the anonymous woman had called the police in order to discipline her son 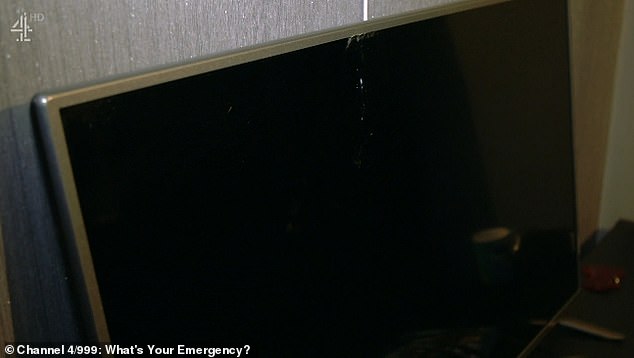 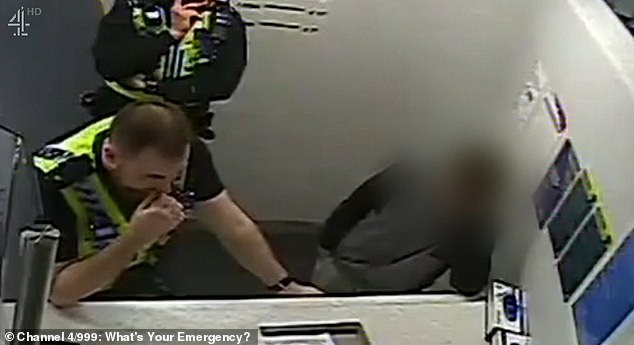 He later told police at the station that there weren’t any family members who could come to accompany him, and said he was unable to read

The officers arrived at the woman’s house, where she described how her son punched the TV, smashing it down the centre of the screen.

‘Ban smacking now’: Experts call for parents to be barred from spanking naughty children amid claims it can make them behave WORSE

Calls are growing to ban smacking across the UK amid claims it has no benefits and can make children’s behaviour worse.

Experts say evidence the practice is harmful is overwhelming. But any move to ban smacking will prove controversial, with campaigners saying it impinges on people’s right to parent as they see fit.

England is one of four European countries where parents can legally use physical force against children if it is ‘reasonable punishment’.

Scotland outlawed physical punishment of under-16s last year and a law imposing a similar ban will be implemented in Wales next year.

But others said banning smacking would be an ‘invasion of government into family life’ that risks criminalising loving parents.

The latest research, published in The Lancet yesterday, evaluated 69 studies into corporal punishment conducted over the past 20 years.

It found under-16s who have been hit by parents are more likely to be aggressive, anti-social and display behavioural problems. The more frequently children are smacked, the worse their behaviour.

Lead author Dr Anja Heilmann, from the UCL department of epidemiology and public health, said: ‘Physical punishment is ineffective and harmful, and has no benefits for children and their families. This could not be clearer from the evidence we present.

‘We see a definitive link between physical punishment and behavioural problems such as aggression and anti-social behaviour.

‘This is a public health issue. But physical punishment is not only harmful – it also violates children’s human rights.’

Joanna Barrett, from the NSPCC, said: ‘This is yet another significant study that shows physical punishment is harmful to children.

‘It cannot be right that in 2021 children are the only group in society that it is legally acceptable to assault in England. The case for reform is beyond doubt.’ The Children’s Commissioner for England Dame Rachel de Souza said yesterday: ‘This report lays out starkly the negative effects smacking can have on children’s development and why it is simply outdated, wrong and unnecessary.’

The Be Reasonable campaign, which opposes smacking bans, said: ‘Parents who love their children should be trusted to decide when a smack on the bum is appropriate. Ordinary mums and dads are fed up of so-called experts demonising their parenting.’

In England parents who hit their children can claim a defence of ‘reasonable punishment’ under section 58 of the Children Act 2004.

But if the violence leaves a mark, such as a scratch or a bruise, parents can be prosecuted for assault.

Smacking is illegal in 62 countries including all of Europe apart from England, Italy, Switzerland and the Czech Republic.

PC Casserly said: ‘He was upset, upset about how he was being treated at home. There’s nothing uncommon for a kid that age.

‘But because she is unable to punish the child effectively herself, she passed that on to us.’

The anonymous mother told police she didn’t want her son being in the house, adding that she felt ‘scared’ of how he might behave.

Officers warned her that if there was nowhere else for him to go, they’d be forced to take him into custody.

The mother said: ‘There’s nowhere else for him to go. I’ve sugar coated it for way too long. Enough is enough now.’

‘We don’t want to arrest a child unnecessarily.

‘But when there’s nowhere else for him to be, it may make the situation worse.’

The mother added: ‘He wants to be a big man, he can live in a big man world.’

PC Casserly said: ‘[I] felt sorry for him. As a 15-year-old, you’ve got lots of anxiety anyway.

‘Then to be arrested, it just made him feel like nobody wants him but I think calling the police was probably the only thing available to her.’

PC Warrilow said: ‘Custody can shock people in a good way. But 15- that’s your formative years.

‘It’s the time you’re going to be effected the most.’

The boy was arrested for criminal damage, but when he arrived at the station to be booked into the station he told police officers he ‘couldn’t read’.

PC Warrilow added: ‘When we deal with kids in custody, we need an appropriate adult. Just to make sure they understand what is going on.

‘In some cases, we have children coming in to us and calling family members and they don’t want to help. Children then have to stay in custody overnight.’

The officers said they were left feeling ‘angry’ over the mother’s behaviour with her son and returned to her home to take a statement.

The woman told them: ‘There isn’t anywhere for him to go. It’s been going on for too long.

‘At the end of the day, I’ve got two other kids to safeguard at the same time. If I keep saying yes, I can’t safeguard them.’

She explained she had been having issues with her son for four years, adding: ‘He doesn’t go to school, he gets excluded.

‘Teachers take him to the inclusion centre, he jumps out of the car when she’s driving him.

‘He’s had 17 interventions and he doesn’t get any better.’

She continued: ‘I can’t describe the feeling. Last week I was willing to end my life.’

PC Warrilow said: ‘You’ve always got teenagers rebelling against the parents but when it becomes a criminal offence…it’s an issue.’

It was later revealed the boy was taken back home to his mother the following day.

Police said the experience of being arrested appeared to have changed his ways.

Viewers were conflicted over how parents should discipline their children after watching the programme.

One wrote: ‘I was dealt punishments by my parents and I have a close relationship with them and show them the respect they deserve.’

Another wrote: ‘I was bought up to respect my elders and police. There are no boundaries for kids, far too much of everything they want.