Australia will ship tens of thousands of locally manufactured COVID-19 vaccines from its Melbourne plans to Papua New Guinea and Timor-Leste within weeks, with both countries battling major outbreaks of the virus.

The first phase of the plan will see 10,000 doses a week of the AstraZeneca vaccine sent to Pacific nations countries with a plan to ramp up that number after domestic production is boosted, according to senior government sources. 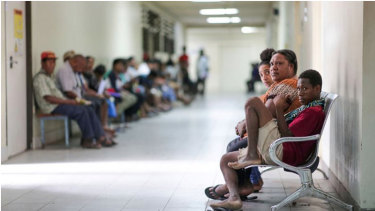 Papua New Guinea’s frontline health services are straining under the impact of the pandemic.Credit:Nine

The plan, first revealed by The Sydney Morning Herald and The Age two weeks ago, was flagged by Prime Minister Scott Morrison on Friday after an alarming new outbreak in Timor-Leste was confirmed with the country suffering its first COVID-19 death and 98 new cases. PNG has recorded almost 8000 cases and 7,839 cases – but with low testing rates the outbreak is feared to be much worse.

Australia last month sent 8,480 AstraZeneca vaccines to PNG, and the country has used these to vaccinate several hundred frontline health workers in the capital, Port Moresby. It is due to receive 132,000 doses on Tuesday under the international initiative known as COVAX.

Shane McLeod, a research fellow working with the Lowy Institute’s Australia-​PNG Network, said the new commitment from the Australian government was “really positive” and the country needed to start inoculating people beyond the capital.

“The start to the rollout has been a little slow so I think there’s big demand from provincial health services to start getting this vaccine and get it deployed to regional health workers,” he said.

“The big challenge will for PNG will be rolling this out. They will need support to roll this out, but the fact that it is coming from Australia, which has delivered the first batch of vaccines, means there are already the systems there that can be extended and expanded.”

In addition to the vaccines, the Australian government on Friday dispatched a Royal Australian Air Force plane to deploy a second expert medical team as well as supplies including large tents, tables, chairs and stretchers, refrigerators and medical devices such as aspirators, defibrillators and vital signs’ monitors.

The Australian Medical Assistance Team will include 17 specialists who will work with PNG’s National Control Centre for COVID-19 and provide advice to local health authorities.

Australia will also send 40,000 rapid testing cartridges, with 20,000 to be delivered to PNG next week.

In a statement, Foreign Minister Marise Payne and Minister for the Pacific Zed Seselja said Australia was “standing by our neighbour as they face these challenges, to save lives in PNG and to safeguard the health security of our region”.