Labor senator Alex Gallacher, who first worked as a truck driver and then to give his former colleagues better pay and a greater chance of coming home safely, died on Sunday at the age of 67.

His family confirmed his death in a statement saying they took pride and comfort that his tenure in the Senate from 2010 had contributed to the progress of Australia. 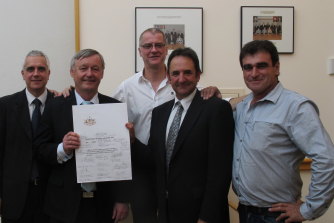 “There’s no smoke and mirrors, just plain talking, hardworking employees and employers alike, in a tough competitive industry that works harder than most people imagine and continues to work while most people are asleep,” Senator Gallacher said of the transport industry in his maiden speech.

It was an attitude he learned as a trucker, labourer and airline ramp operator and kept as he became a branch secretary and national president of the Transport Workers’ Union, which he first joined in 1975. It stayed with him in Parliament, even after his lung cancer diagnosis in December 2019.

“Through his illness he never wanted to stop,” said Ian Smith, a close friend who holds Senator Gallacher’s old role as secretary of the TWU’s SA/NT branch. “He didn’t go there [to Canberra] to do nothing, he went there to make a difference.”

As recently as June, Senator Gallacher was still present in the Senate. Mr Smith remembered him as a direct, loyal, tenacious man and strategic thinker. 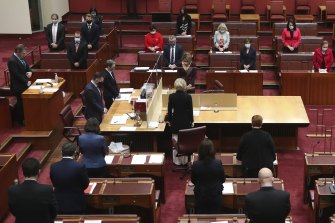 Senators stand to observe a moment of silence after Senate President Scott Ryan announced the death of Alex Gallacher.Credit:Alex Ellinghausen

“He always had a plan,” Mr Smith said, remembering how he had reluctantly applied for a position with the union in the 1990s, feeling it would go to someone else. “[Senator Gallacher’s] first words were ‘Ian: the recruitment co-ordinator position is yours if you want it’. Hook, line and sinker.”

After 22 years with the union, including through the WorkChoices era, Senator Gallacher was elected to Parliament, where he served as chair of the economics committee and the foreign affairs, defence and trade committee and co-founded the Parliamentary Friends of Road Safety group.

He successfully campaigned for the establishment in 2012 of the Road Safety Remuneration Tribunal, which was designed to set pay rates that would stop truck drivers and companies cutting corners and crashing. It was later abolished by the Turnbull government, which argued it had not made the industry safer.

Senator Gallacher concluded his inaugural speech with a test for his time in Capital Hill. Quoting former US president Theodore Roosevelt, Senator Gallacher said: “Far and away the best prize that life has to offer is the chance to work hard at work worth doing”. “Alex did that,” Labor leader Anthony Albanese said on Monday in the House of Representatives.

“Alex was proudly of the old-school Labor mould,” Senator Birmingham said in a statement. “Whilst he may have been born a Scot, Alex made Australia home and always worked hard to advance the interests of South Australia and his fellow Australians.”

The Senate adjourned early on Monday afternoon in a gesture of respect to Senator Gallacher while the House of Representatives paid tribute to his service before question time.