Time stamp! Incredible pictures show how the years take their toll – including shadows of customers on a coffee house wall and a statue disappearing into a tree trunk

From shadows on a coffee house wall showing all the people who have visited to a penny which was kept in a pocket for 50 years and now has no face, these incredible pictures reveal how objects are worn down with time.

Bored Panda has rounded up a gallery of stunning snaps that capture how items have become more interesting with age.

Among the images that give a glimpse back in time are the stairs on the Great Wall of China, which have been worn away by years of footsteps and layers of spray paint sealed into a broken piece of the Berlin Wall.

Another image shows an old coffee shop, believed to be in Reykjavik, Iceland, which has shadows of past visitors.

Here, FEMAIL rounds up a selection of the most captivating dated objects… 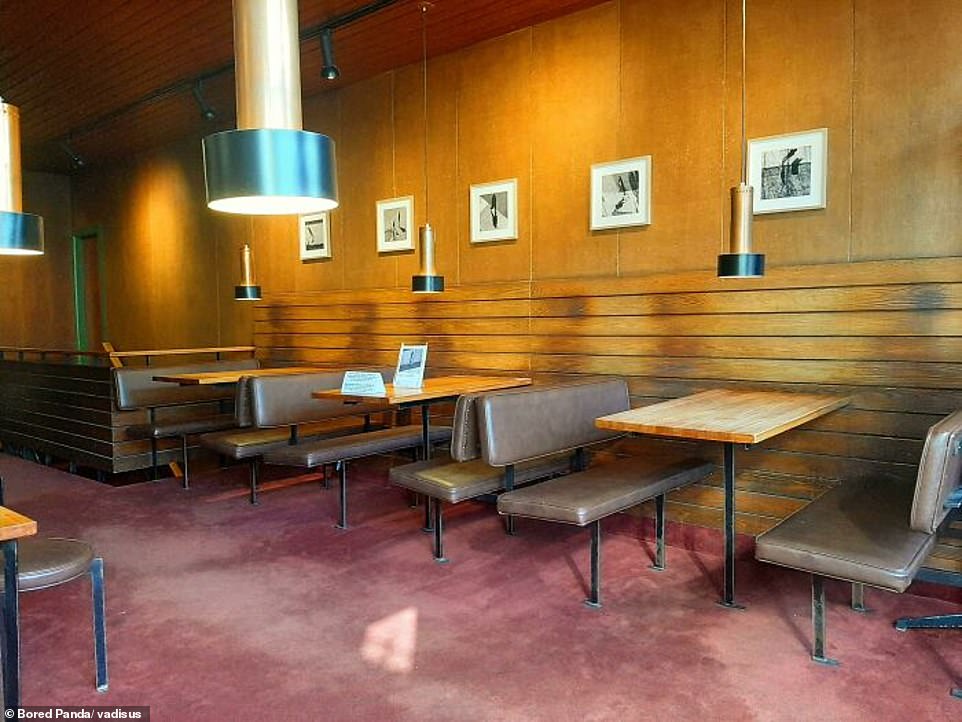 Fine dining! One photo, believed to have been taken in Reykjavik, Iceland, shows how the sun has bleached walls, while leaving eerie shadows showing people on either side of the table having conversations 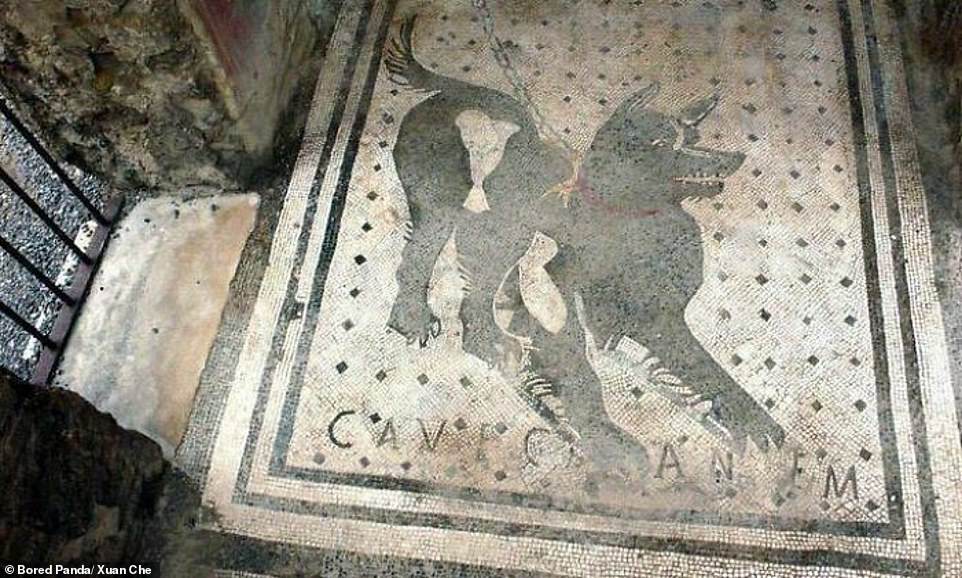 Another image from the Pompeii ruins shows a ‘Beware of the Dog sign, which is still visible despite dating back to the second century BC. The image shows a stunning mosaic at the House of the Tragic Poet, which was made to resemble the image of a black dog, complete with a chain around it’s neck 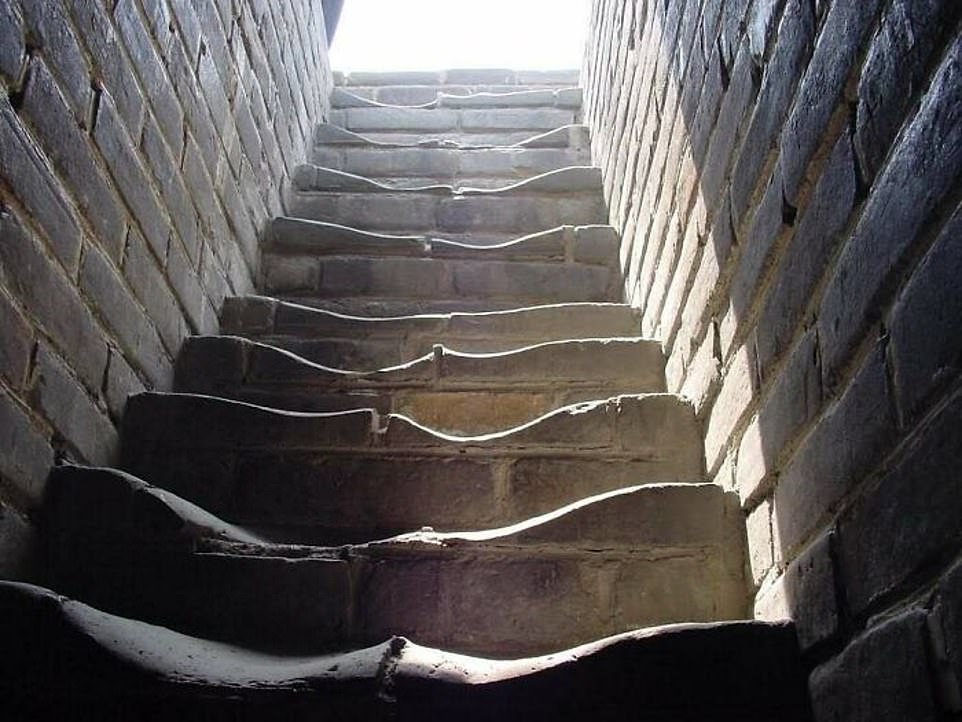 Up, up and away! Carved out from years of people eager to visit one of the Seven Wonders of the World, the footfall on The Great Wall of China has resulted in dipped stairs 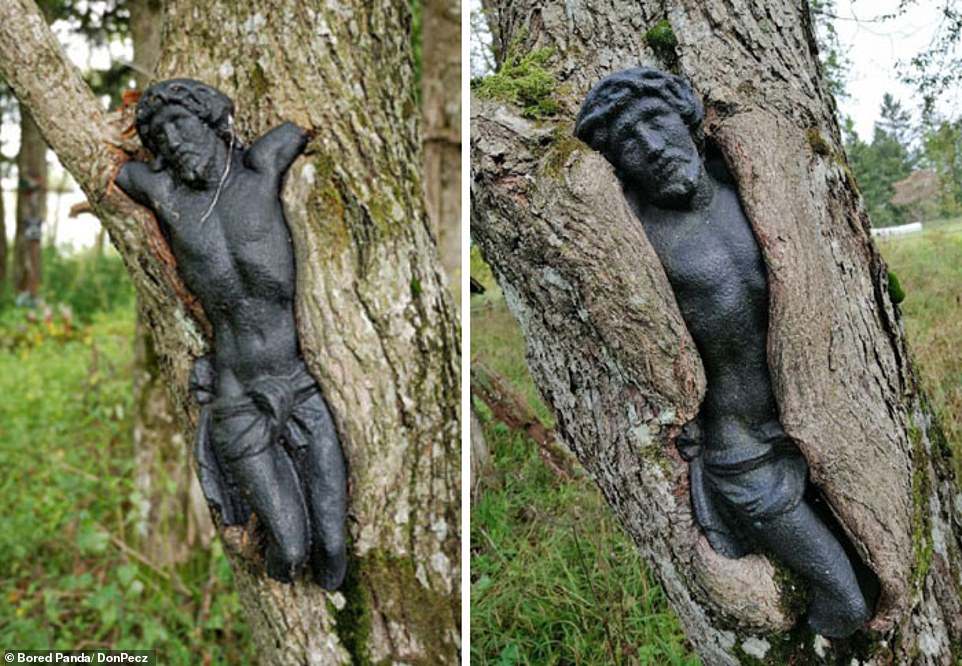 One photo snapped at an abandoned cemetery in the small village of Łupków in Poland, shows how a sculpture of Jesus has been slowly absorbed by a tree over the past 12 years 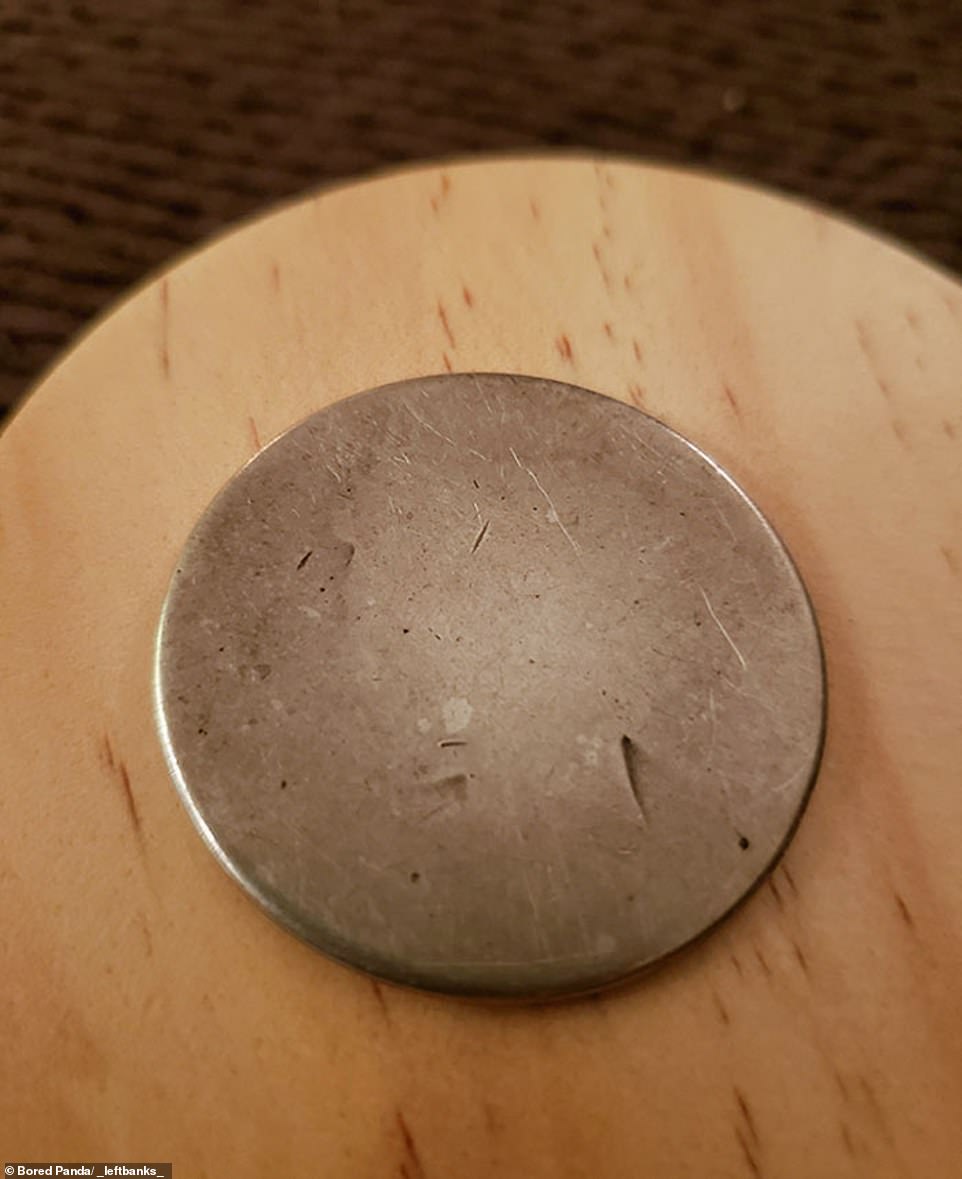 One person, who lives in the United States, claimed their father has been carrying this Liberty Dollar coin for more than 50 years, despite the engravings having worn away 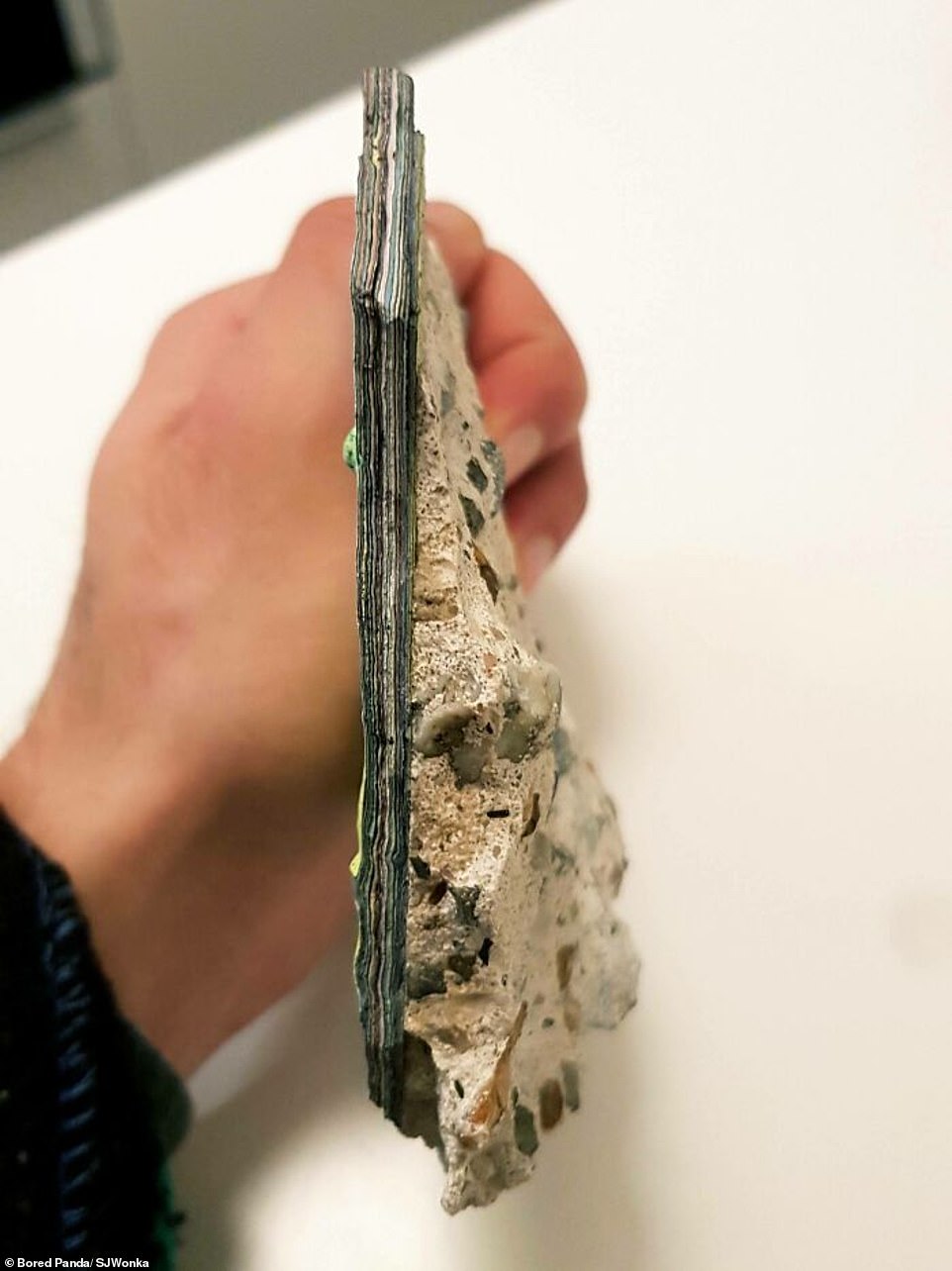 Another image reveals what paint looks like if it is not removed, with a broken piece of the of the Berlin wall showing layers of graffiti that have built up over the years 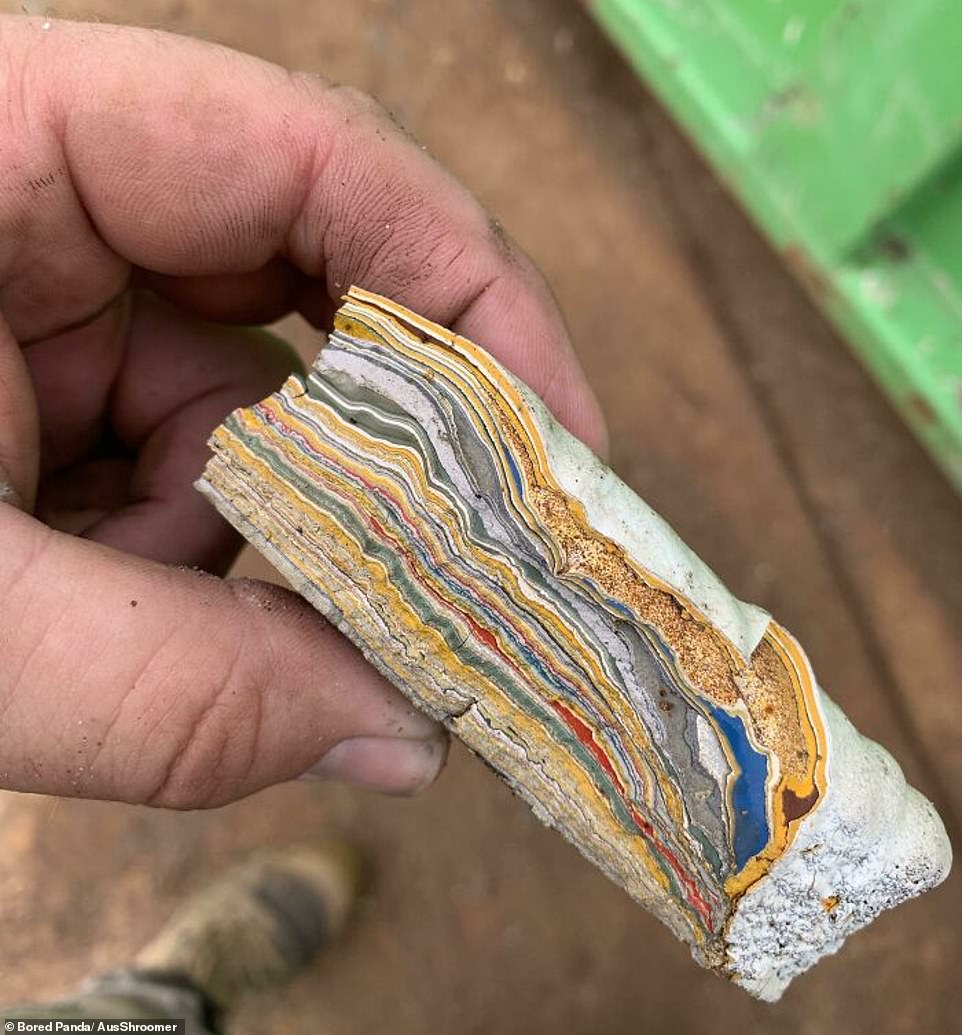 Weathering the storm! An image, believed to have been taken in the US, shows years of paint buildup from a trestle – with layers of bright colours withstanding over time to form a solid block 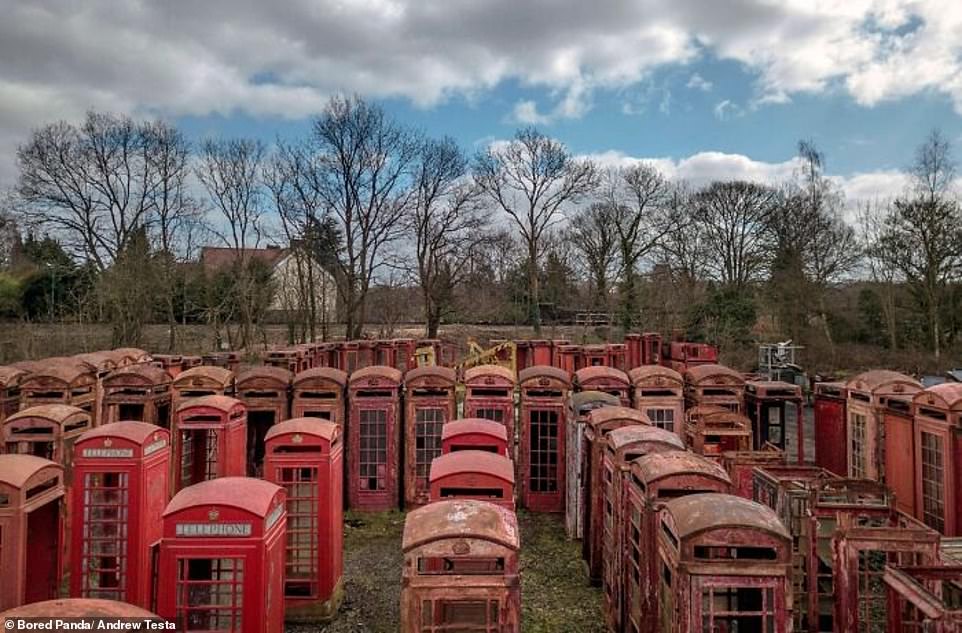 The telephone boxes graveyard is located in the small village of Carlton Miniott, North Yorkshire, shows the iconic symbol of Britain in various states of decay. As the years go by, decommissioned red phone boxes are replaced and deposited in this site. In the 1980’s, over 73,000 red telephone boxes were in use, and by 1992 there were at least 92,000 red boxes dotted all over the UK. As mobile phones became more popular, the need for public phone boxes decreased, and after a while only one third were able to provide a service. During the early 2000’s, only about 40,000 were still working and the rest were disabled, with many eventually ending up here 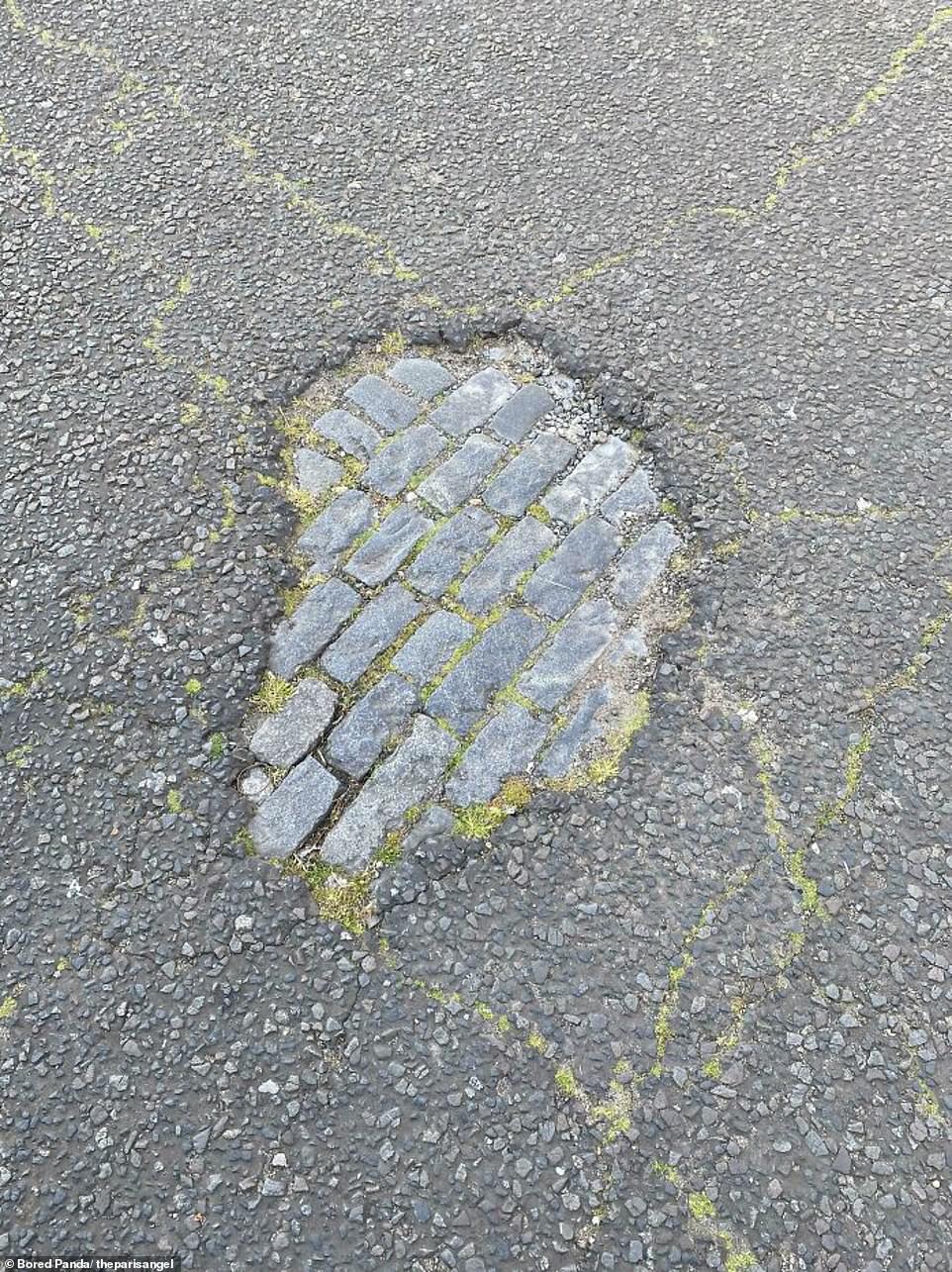 Another individual, who lives in the UK, revealed a street on their way to work has worn away enough to reveal the cobblestones that were covered over 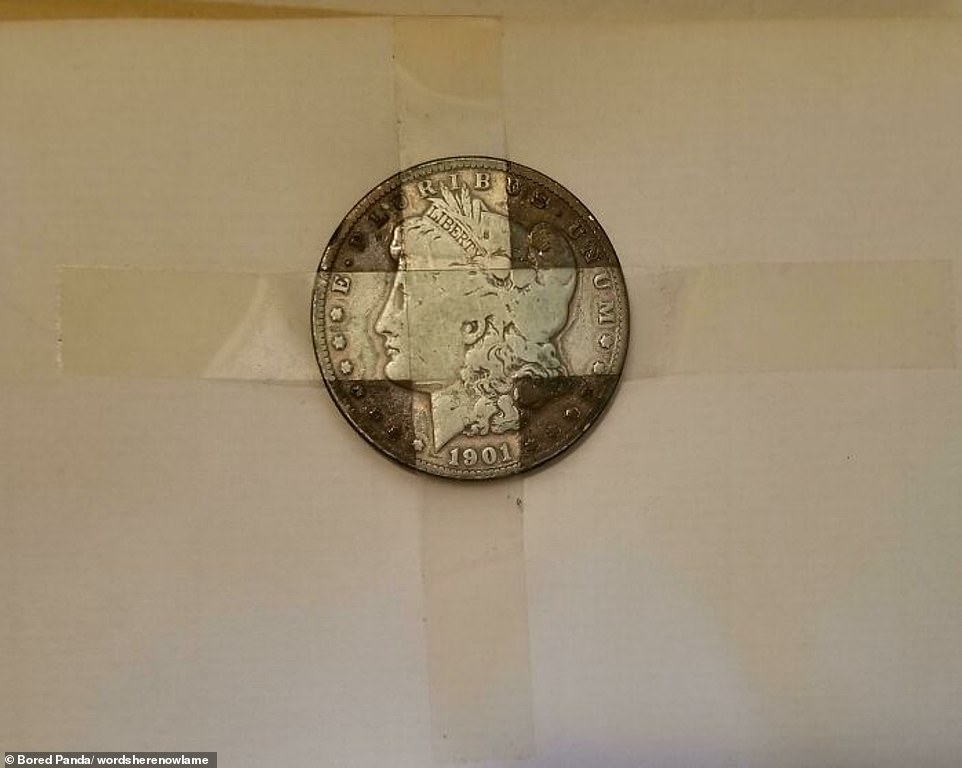 In for a penny! One person took to Reddit to joke about how the coin in their father’s baby book had only remained clean in the areas covered by sellotape 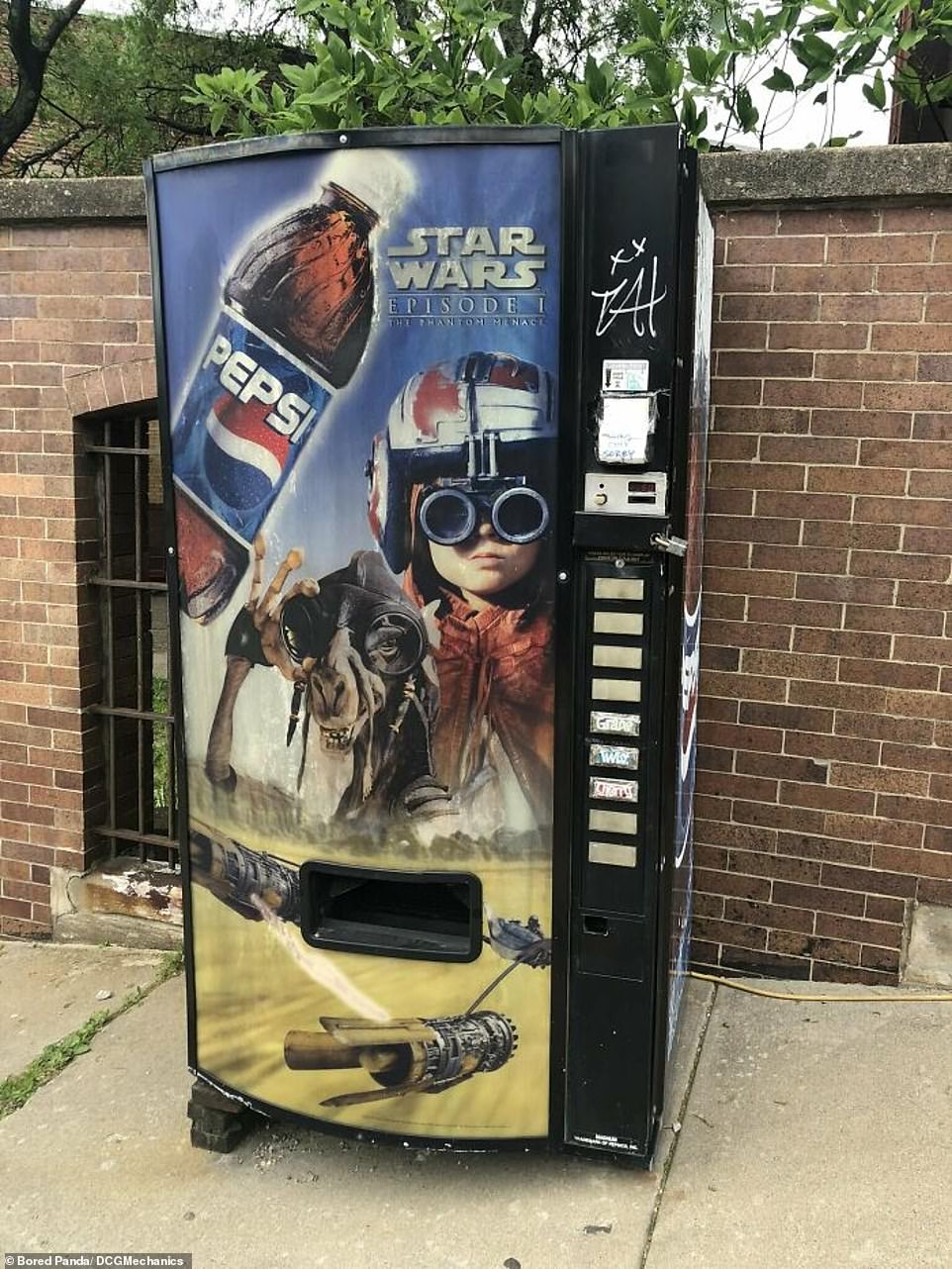 Out of service! A Reddit user, who is believed to live in the United States, shared a photograph of an abandoned vending machine advertising a Star Wars film first released in the 1990s 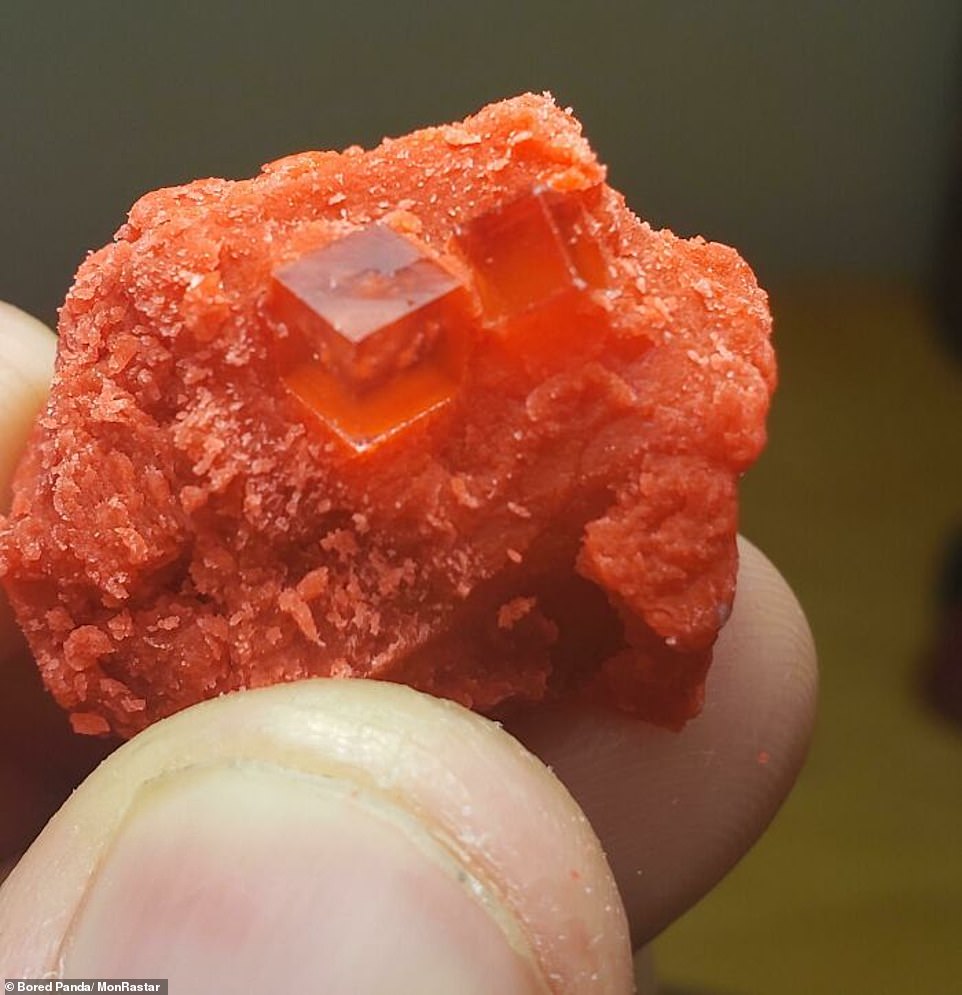 One baffling image, believed to have been taken in America, shows cubic crystals starting to form in old Play Doh. Children have enjoyed playing with the moulding substance since the 1950s 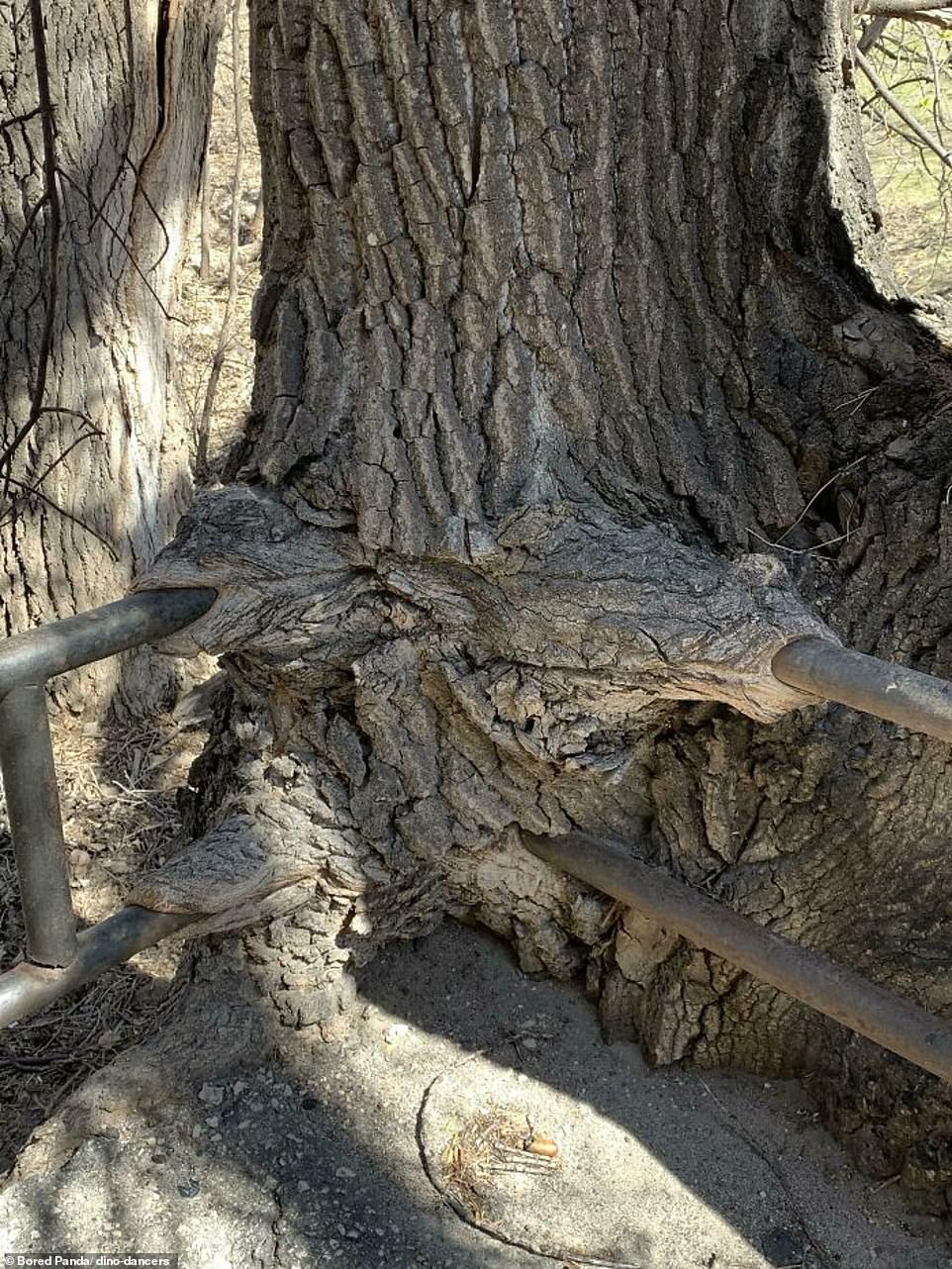 Another photograph, shared on U.S-based forum Reddit, shows how an old railing is slowly merging with a large tree after being in the same position for years 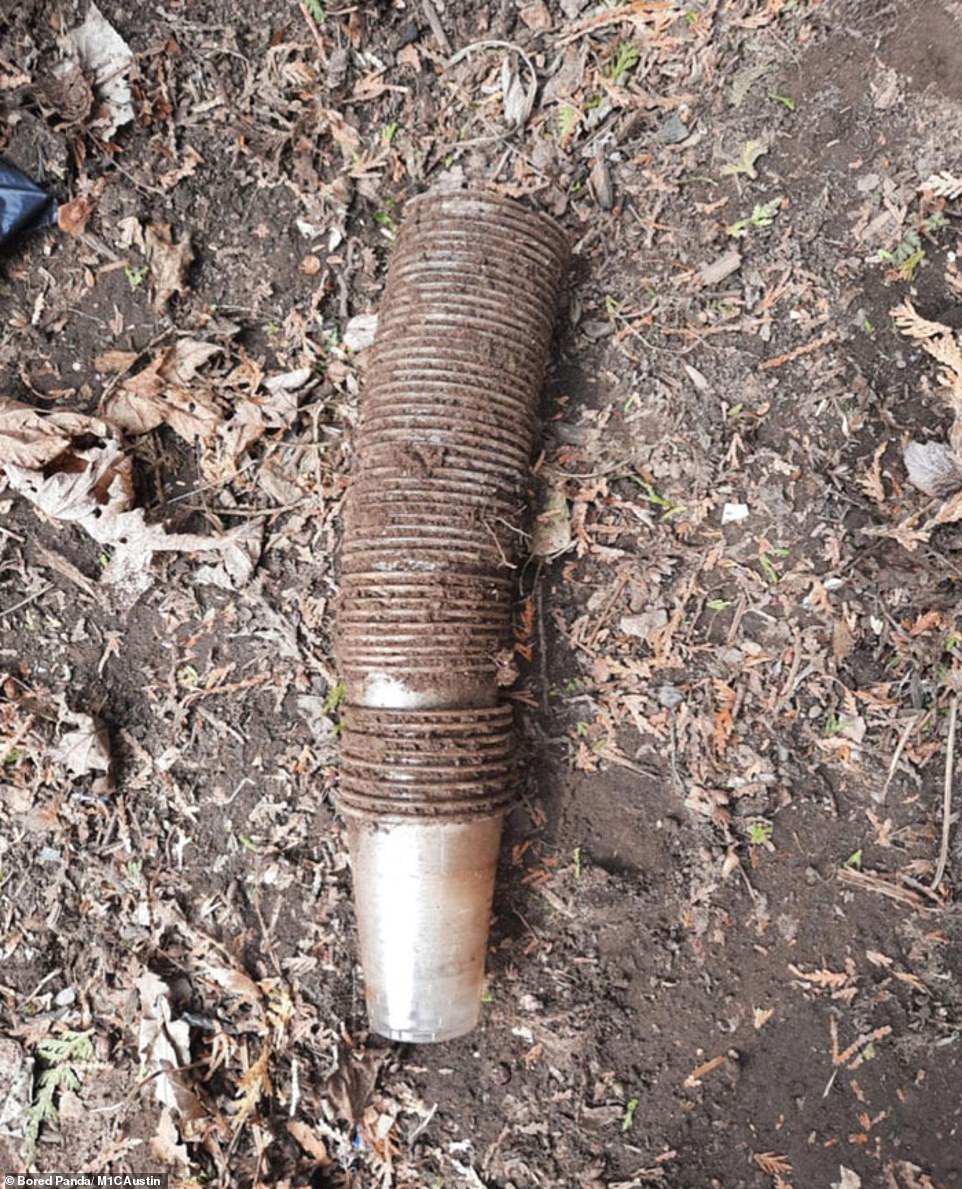 Thirst quencher! One image shows ‘biodegradable’ cups that remained in an almost usable condition, 15 years after being placed in a composter 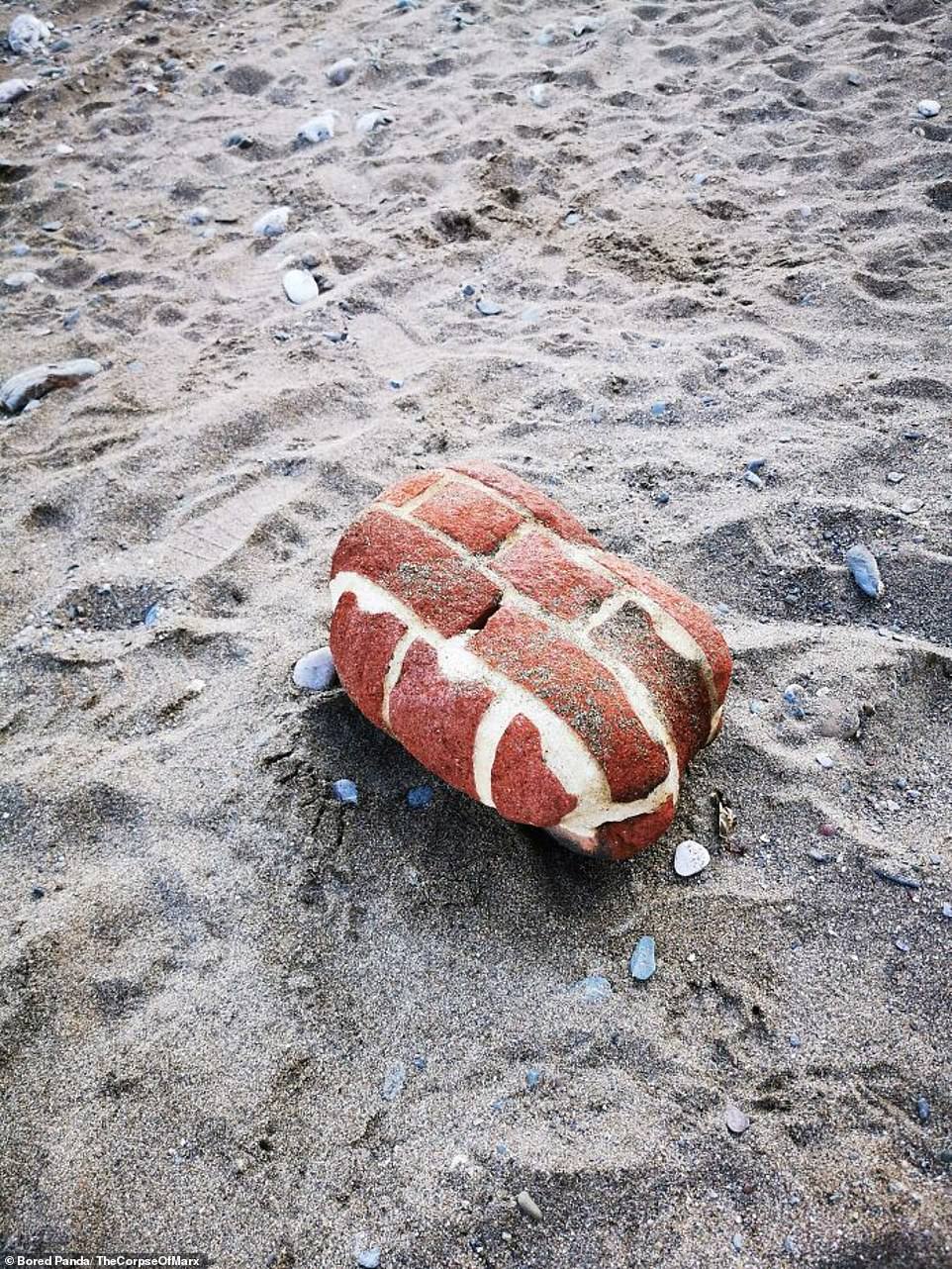