WA Labor’s commitment to reduce train fares is hoped to increase patronage on the Transperth rail network by more than 2.3 million journeys a year, but experts say it is not a silver bullet to get people back on the train.

The party’s estimate means about 6000 weekday car journeys would be taken off the road and patronage levels could reach the heady days of the mining boom, when they peaked between 63 and 65 million boardings. 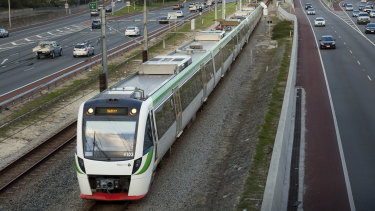 Bus and train use has been hemorrhaging since the pandemic.

COVID-19 has crushed public transport use as some companies persist with work-from-home arrangements and health-conscious commuters opt to avoid the peak hour train ride for the comfort of their car.

Public Transport Authority figures from July to November show total boardings on the train network were down 1.7 million per month on average compared to the same period in 2019, while freeway traffic counters show no difference in traffic volumes.

Labor’s $60.3 million commitment over three years would see all fares capped at a two-zone price of between $4.90 and $3.90 next financial year, with lower-cost fares continuing over the following two years.

The haemorrhaging patronage makes the lower fare announcement an important tool to get outer suburban residents out of their cars and onto the train to bolster the viability of the Transperth system, which is already subsidised to the tune of $950 million.

A recent survey by RAC showed 65 per cent of those who drove regularly during peak hour would consider using public transport if it was more affordable.

However, some of WA’s most distinguished transport experts believe fares alone won't be enough to get commuters back on the rails.

She said the fare reduction would likely increase patronage from outer areas with well-serviced access to stations, but economic conditions and improved roadways were also big factors.

Ms Biermann said the downfalls of low fares included the risk of revenue shortfalls and the promotion of urban sprawl at the expense of infill in inner-city areas.

“Even with a potential increase in commuters, commuting rates from outer areas are relatively low and increases may not be sufficient to make up for reduced fares,” she said.

“That is the part that is really needing improvement and we will not get the full benefit from this saving of money move in those areas until we’ve got very highly co-ordinated bus services or new technology trackless trams that can bring people to those stations,” he said.

“It’s hard to get parking, so people get stuck on the buses and they lose a lot of the time advantage because they're not able to get to the station quickly and simply in a co-ordinated way.”

“It’s extraordinary how much money you can still lay your hands on to build high-capacity roads,” he said.

“As part of Metronet, we're improving our connections to train stations including new pedestrian and cycling paths along with the planning of new bus feeder services as part of our stations,” she said.

“We also plan to have more housing adjacent and closer to stations at both new and redeveloped stations to encourage more people onto our train system."

“We will continue to announce comprehensive policies throughout the campaign that will also assist with this issue,” she said.