Home » Lifestyle » Prayer, pop and the ghosts of Presidencies past

With a lineup of A-list recording artists, the concert marking the inauguration of America's 46th presidency felt a long way from four years ago when organisers struggled to find performers willing to endorse Donald Trump's ascension to political office with a performance.

Accompanying a transition of power with musical fanfare is a long-held tradition in American politics, but Inauguration Day galas are largely invitation-only events, reserved for party donors, the who-used-to-be-who and the what's left of high society and the political hoi polloi. 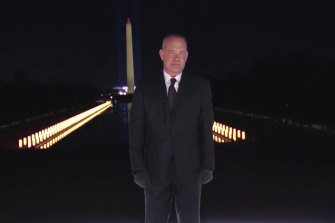 The real power of the event was not its star lineup but its accessibility to anyone with a television screen or internet connection. America threw a party and for the first time in two centuries invited all Americans – and the whole world – to share the same seat in the audience.

The tone was one of cautious hope. It opened with readings of the inaugural speeches of past presidents including Abraham Lincoln, Franklin Delano Roosevelt and John F. Kennedy. Hanks spoke of "deep divisions" in the country. "I want to offer this small prayer," Bruce Springsteen said before he opened the show. 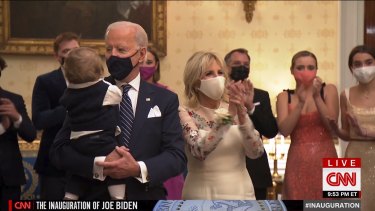 Emotional moments came unexpectedly. Introducing Bon Jovi's performance of Here Comes The Sun, UPS courier driver Anthony Gaskin spoke on behalf the essential workers who have kept the machinery of American life going through 2020 and 2021. It was genuinely affecting.

And Seattle, Washington-based teacher Mackenzie Adams, whose enthusiasm for teaching online sent video clips of her classes viral last year, introduced a performance by The Foo Fighters. The introduction had particular poignancy for lead singer Dave Grohl, who talked of the importance in his own life of his mother Virginia, who was a schoolteacher for 35 years. 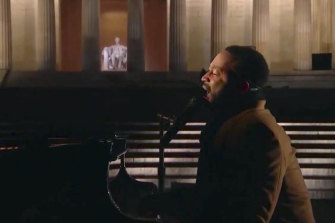 Then there was chef Jose Andres, who described himself as "an immigrant and proud American citizen", speaking on behalf of community organisations which have, in the last year, created more than 35 million meals to feed those who have struggled to put food on their tables. And a young girl, Morgan Marsh McGlone, who launched an online lemonade stand to raise money for the same cause.

The message at the heart of the telecast – the hard work of ordinary Americans, the contribution of the immigrant community and, thanks to a live cross to the orbiting International Space Station, the value of investment in science – was clear. 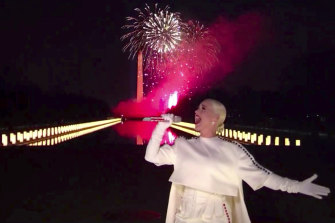 And the star wattage was formidable, from a reading by Lin-Manuel Miranda, to observations from three former presidents, Barack Obama, George W. Bush and George Clinton. Then came a moving replay of gospel singer Yolanda Adams' performance of Leonard Cohen's Hallelujah, from the COVID-19 memorial held earlier in the day.

Packaged for television, the Hollywood moments were spectacular.

Vice-President Kamala Harris, with the stunning Washington Monument behind her – a 169m tall marble obelisk built to honour the first US president George Washington – indirectly referenced her own journey, as America's first female Vice-President, to illustrate the power of American aspiration.

"In many ways this moment embodies our character as a nation," Harris said. "It demonstrates who we are, even in dark times. We not only dream, we do. We not only see what has been, we see what can be. We shoot for the moon and then we plant our flag on it. We are bold, fearless and ambitious. We are undaunted in our belief that we shall over come, that we will rise up. This is American aspiration."

And a long swooping camera crane shot took the audience up the steps of the Lincoln Memorial to hear from President Joe Biden, who was standing at the feet of a marble representation of the American political demigod, Abraham Lincoln, designed by Daniel Chester French, carved by the Piccirilli brothers and first unveiled in 1922.

A story largely forgotten in modern America, and not explained in the telecast, the Piccirilli brothers are a great American immigrant story.

Ferruccio, Attilio, Furio, Masaniello, Orazio and Getulio Piccirilli were taught their marble-carving craft by their father, Italian-born Giuseppe Piccirilli, and count some of America's most iconic statuary among their works, including the Tomb of the Unknown Soldier at Arlington National Cemetery, the Washington Square Arch in New York and the statuary at the Pennsylvania State Capitol.

"It is humbling to stand here in this place in front of these sacred words," Biden said, referring to the inscriptions of Lincoln's Gettysburg Address and his second Inaugural Address, delivered in 1865, just one month before the end of the Civil War, which adorn the north and south interior walls of the monument. 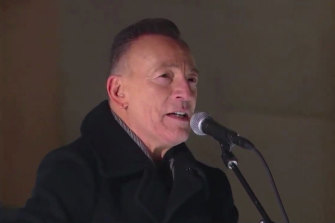 “I want to offer this small prayer,” Bruce Springsteen said before he opened the show.Credit:AP

"Humbling out of respect to President Lincoln and the office we now share and humbling because of you, the American people," Biden said. "This is a great nation, we are good people and to overcome the challenges in front of us requires the most elusive thing in a democracy: unity."