Martine spoke with HL EXCLUSIVELY and revealed how she felt after Steven was questioned by her parents about his job as a DJ.

Martine‘s “heart sank” after introducing her boyfriend Steven, 33, to her parents for the first time in this EXCLUSIVE preview of the August 1 episode of Love In Paradise: The Caribbean, A 90 Day Story. After dating on and off for three years, Martine, 26, thought it was a “good time” for Steven, a Barbados-based DJ, to meet her parents.

“My heart sank because I know my parents are very old school. So I knew they were gonna have some serious questions. I just wanted them to go easy on him but they definitely did not,” the Miami-based beauty EXCLUSIVELY told HollywoodLife. 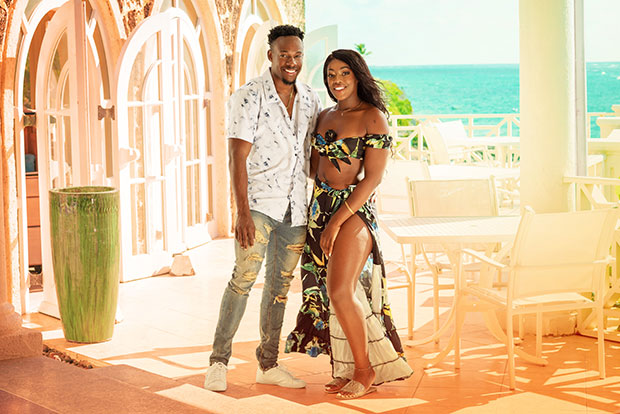 Steven and Martine met on a cruise and their story centers around trust issues and infidelity. Love in Paradise follows the couple’s story as Martine heads to the Caribbean to spend time with Steven. She said, “I was spending two weeks with him, we were talking about the big issues, and commitment was on my mind. I feel like it would make sense for him to at least know my parents because if I’m looking to take the next step I wanted their approval. I wanted them to actually know the person I’d be spending a lot of time with.”

In the EXCLUSIVE clip, Steven shares his thoughts during a solo confessional interview ahead of the virtual meeting with Martine’s mother and father. “Martine hasn’t introduced me to her parents as yet, and I always ask her why but she may be a little… I can not say ashamed but she doesn’t know if her father’s going to approve of me or not. If her parents don’t give the approval, it may put a strain on the relationship,” he said.

During the awkward encounter, Martine’s father asks Steven what he does for work in St. Thomas. “I DJ and host parties. That’s what I do right now.” After a subtle eyeroll and a quick “mmhmm” from her parents, Martine’s father replies, “To me, DJing is not something that someone would be doing on a professional level. DJing, you do it at night. What do you do during the day?” Steven responds, “Practicing my craft. Just making sure that I am good for when I go to play.”

As for the trust issues in their relationship due to Steven’s past infidelity, Martine says “it’s progressing.” “He’ll show what he’s willing to do, or what he’s not willing to do but I think that it’s also communication and time. There’s some things that he can do and some things are just me getting out of my own head,” she said. “I do understand that we have trust issues and he knows that, but I mean, there’s a reason I have trust issues. So I think if he would address the things that I asked him, or if he was a little more forthcoming with feelings, or his thoughts and his plans or goals, then there wouldn’t be as many issues.”

You can follow Steven and Martine’s journey with Love In Paradise: The Caribbean, A 90 Day Story which airs Sundays on Discovery+.