Home » Lifestyle » Moot point: which confusing word should be booted from the language?

Moot point: which confusing word should be booted from the language?

Uproot moot – that’s my advice. Banish it. Pretend the word never existed. Take a scoot, moot! We never loved you. Not really. Okay, maybe for a moment, about 900 years ago, but deep down we knew you were treacherous, a nest of contradictions. 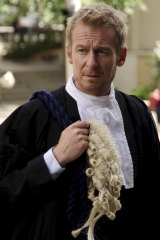 It is a moot point if Richard Roxburgh plays a clever barrister in ABC TV’s ‘Rake’.

For proof, consider this whole lockdown dilemma. Every city must tweak its regulations in response to a viral outbreak. The question is when? And how? There’s no strict manual when it comes quelling a novel strain. Health officials must debate the pros and cons, the wearing of masks versus none. To shut down or not?

Everything is moot, in other words – open to debate. Presuming that’s the nuance you’re intending, as moot can mean two things, where each cancels the sense of the other. Either you’re suggesting the lockdown needs arguing, or the horse has bolted and debate is in vain. So which is it?

Dictionaries hardly mediate, declaring the two definitions – both sound, both handy, but mutually futile. How can one word denote “subject to discussion” as well as “irrelevant, or beyond discussion”? Answer: it can’t. Moot, you’re a brute.

Curiously, the link is meet. Or meet is moot’s first cousin, the duo arising from “gemot” in Old English – a formal assembly. As a rule, assemblies met to debate rules; they still do, the meeting of minds and ministers. If an issue is moot – as in undetermined – then it’s time to gather the key players and thrash it over.

Neat. Clear. If the health benefits of wine are moot, for example, then we understand that grassy sangiovese can do you a favour – or not. The jury is out. The doctor is weighing the evidence as you drain the glass. There’s every reason to retain a word like moot as life is littered with ample things – from plonk to policies – that warrant dispute.

When in doubt, blame the lawyers…steeped in faint mockery, the moot court is toothless, fruitless, bearing no brunt beyond its sanctum.

Then came the bewilderment, the great fork-off of the mid-1500s, when law students held their own “gemots” to debate mock cases. When in doubt, blame the lawyers, as they say. Steeped in faint mockery, the moot court is toothless, fruitless, bearing no brunt beyond its sanctum.

Imagine a gaggle of L-plated barristers, say, representing the 700-plus survivors of the Titanic, plus the families of the drowned. Naturally they seek damages from the White Star Line, the owners of the vessel which sank off Newfoundland on April 14, 1912.

Why am I telling you this? You’ve seen the movie. You know the details. The iceberg is old news, the time to save lives been and gone. Everybody knows how to save a ship once it’s been sunk, to borrow the Italian proverb. The debate is dead in the water, to give moot its second sense. The contest is academic in terms of campus and its zero consequences.

Hence the mess that moot’s become, a contranym serving two masters. English has more than its share. Sanction, for one, can mean to endorse or condemn, just as tabling can refer to the placement of a motion for debate, or the motion’s removal from the table for some later discussion, if any.

Context will often signal which sense is intended. If I said fuse then you’d soon twig whether I meant melt or meld, just as literally has been corrupted to double as figuratively, obliging listeners to spot the difference.

Yet moot is more duplicitous, its setting offering fewer clues, its ambiguity absolute. Not to say dangerous. Wait, which moot do you mean? Is there still time to hurl out lifebuoys, to save lives, or has the ship glugged and gone?