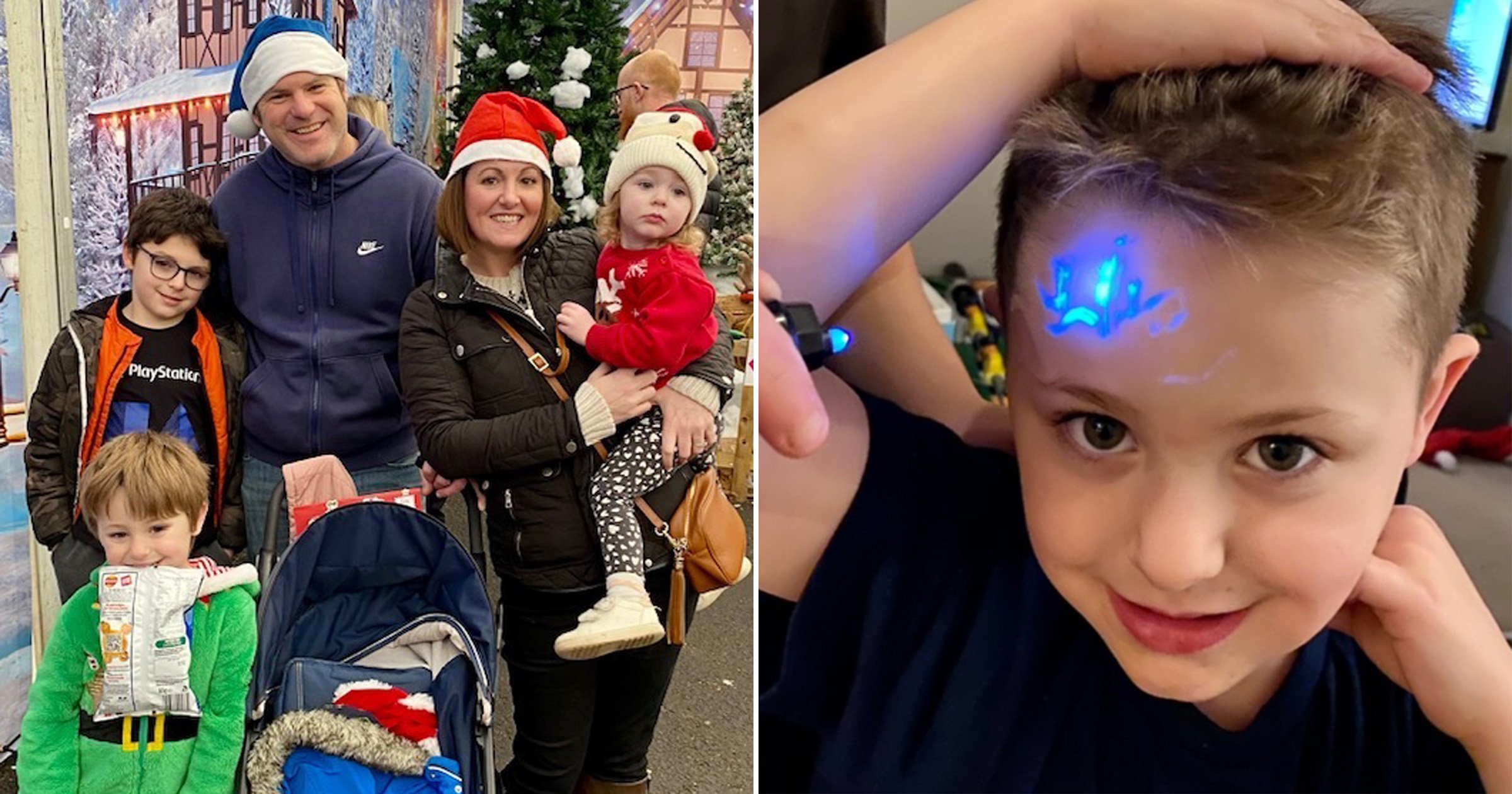 It’s not the kind of plea for help you hear everyday.

A mum is at her wit’s end after finding her son had drawn on his forehead using invisible ink – which now won’t shift.

Taking to Facebook, she asked for help and tips – much to the amusement of those seeing the pictures.

Claire Sheard, 40, from Welwyn Garden City, Hertfordshire, has spent the past three days scrubbing her son’s head with baby oil in a bid to wipe away the ink, which spells out his name.

While the boy’s family were playing a board game, five-year-old Louie discovered his older brother’s Christmas present – an invisible ink set.

Standing in front of a mirror, he scrawled his name across the top of his head.

‘He came in proud as punch to show us,’ Claire said.

‘His head looked robotic. We were all in hysterics.

‘We couldn’t see anything and I asked him what he’d written with as there was nothing there so he went back into the lounge, retrieved the offending pen and brought it back to us.

‘Henry then started laughing as it was his pen and clocked the situation before me and my husband did. We found it so funny.’

Claire took her son to the bathroom to try and wipe off the marking but found nothing would do the trick.

‘You can make out the L, O and I if you look closely.

‘We tried wet wipes and baby oil to remove it but to be honest I wasn’t too worried as hoped it would fade after a few days.

‘At least you can’t see it to the naked eye.

‘It was like seeing something from a superhero movie. Louie thinks he a pretty cool dude and very proud of himself.

‘Although he knows not to do it again.’

Stuck for how to remove the ink, she took to Facebook to ask for advice.

Her post has already racked up 1,000 likes, with Claire captioning it: ‘Any thoughts on how to remove spy pen invisible ink?

‘Only visible in fluorescent light? Asking for a friend. It does not wash off with soap & water!’

Hundreds have offered advice, with many left in stitches at the hilarious situation.

‘Micellar water or any makeup remover, don’t use harsh and dangerous products on child’s face as he might get a really bad allergic reaction. Good luck,’ wrote one person.

A fellow mum, who had found herself in the same position, wrote: ‘Baby oil and warm baths with soapy water. It comes off in the end.

‘My husband did this to my son when he was two. I did not find it amusing. Hope it comes off soon.’

Others joked about how the inking suited the schoolboy and were keen to buy the product themselves.

‘Looks awesome, looks like he’s had some kinda microchip planted in his head. On a serious note hope it wears off quick,’ wrote one person.

‘Best thing to do is take him to a rave,’ joked someone else.