Prince Konstantin of Bavaria has tied the knot to his wife Deniz Kaya in a romantic ceremony church in St Moritz, Switzerland.

The bride looked stunning in an ivory lace gown featuring long-sleeves and a scalloped neckline, which she teamed with a sweeping full-length veil.

European high society flocked to Switzerland for the wedding, with Princess Sofia of Sweden among the glamorous guests.

Konstantin, 32, is the son of Prince Leopold and Princess Ursula of Bavaria, and part of the House of Wittelsbach that ruled the German region until 1918. 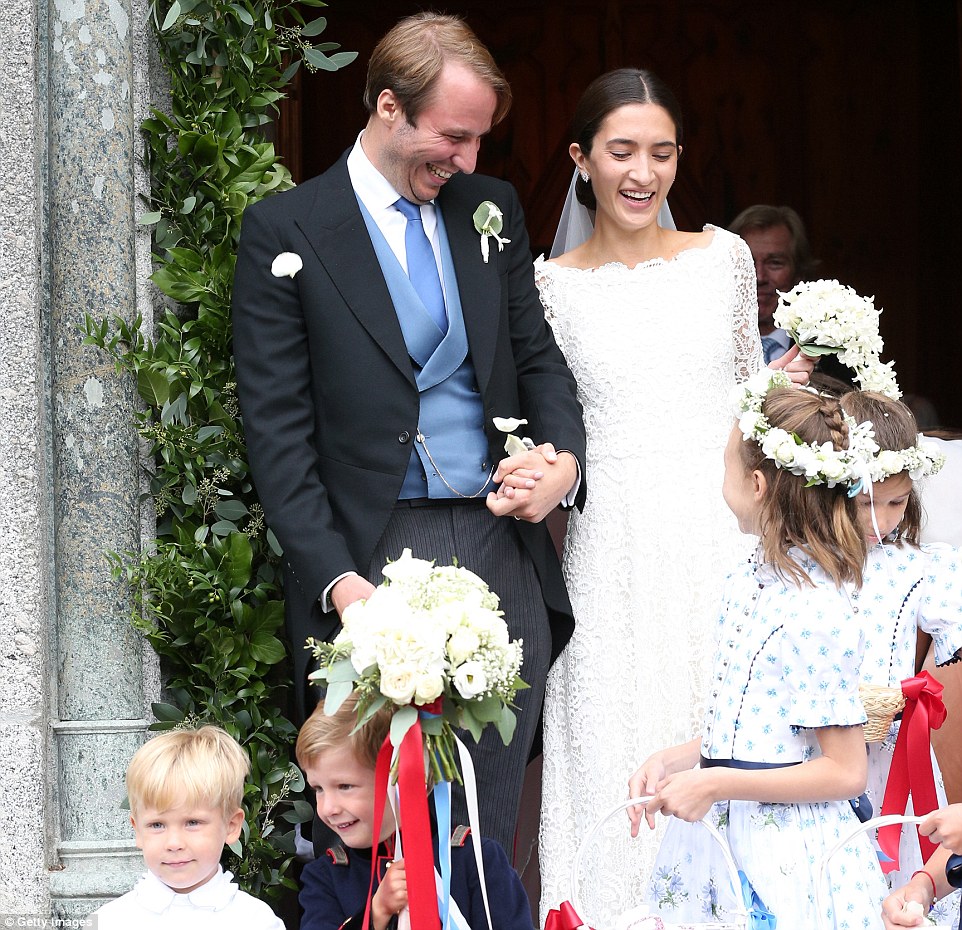 Prince Konstantin of Bavaria tied the knot to Deniz Kaya in a romantic church ceremony in St Moritz, Switzerland 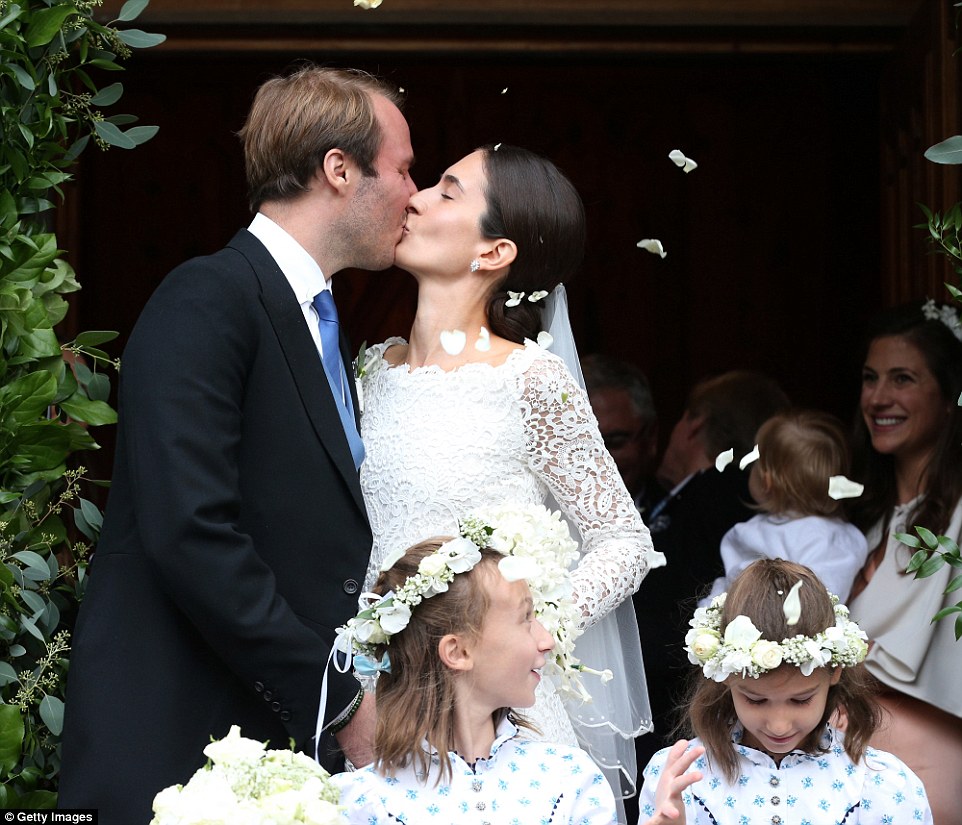 Konstantin and Deniz and were seen exchanging a kiss as they left the French church, Eglise au Bois, as husband and wife following the ceremony 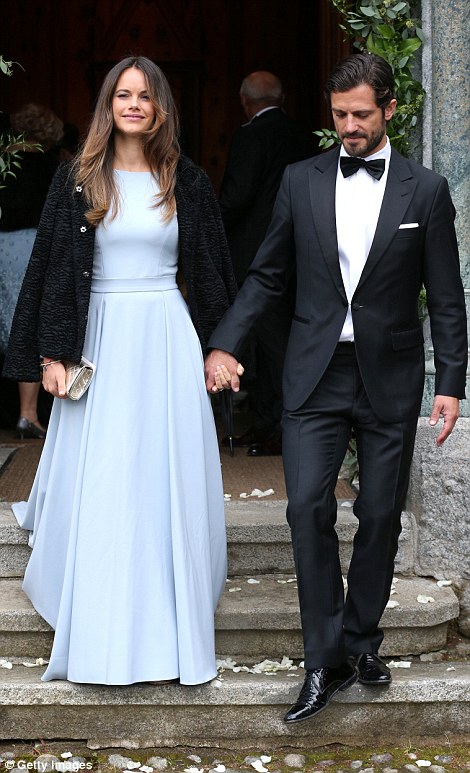 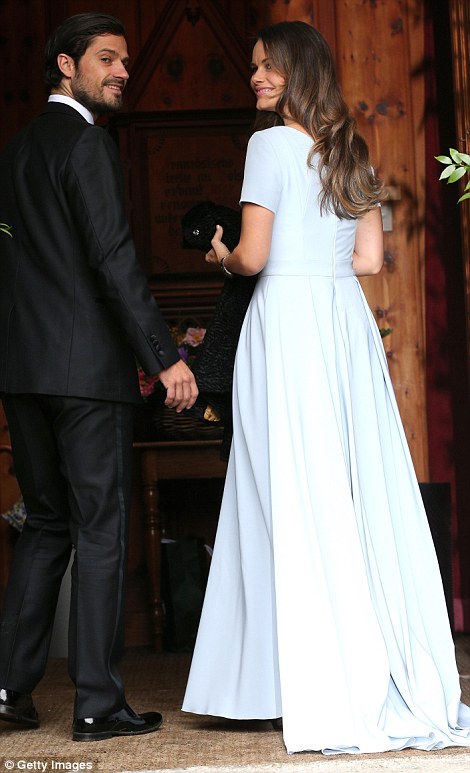 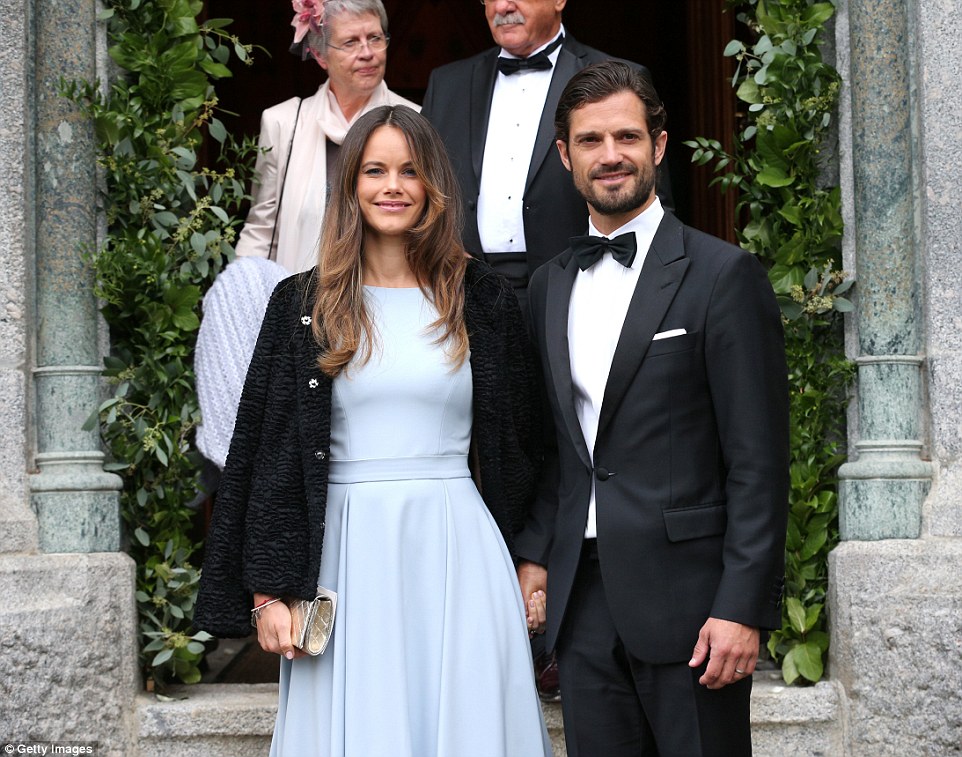 Sofia, 33, opted for an elegant blue dress, which she teamed with a chic black jacket and gold clutch bag for the ceremony 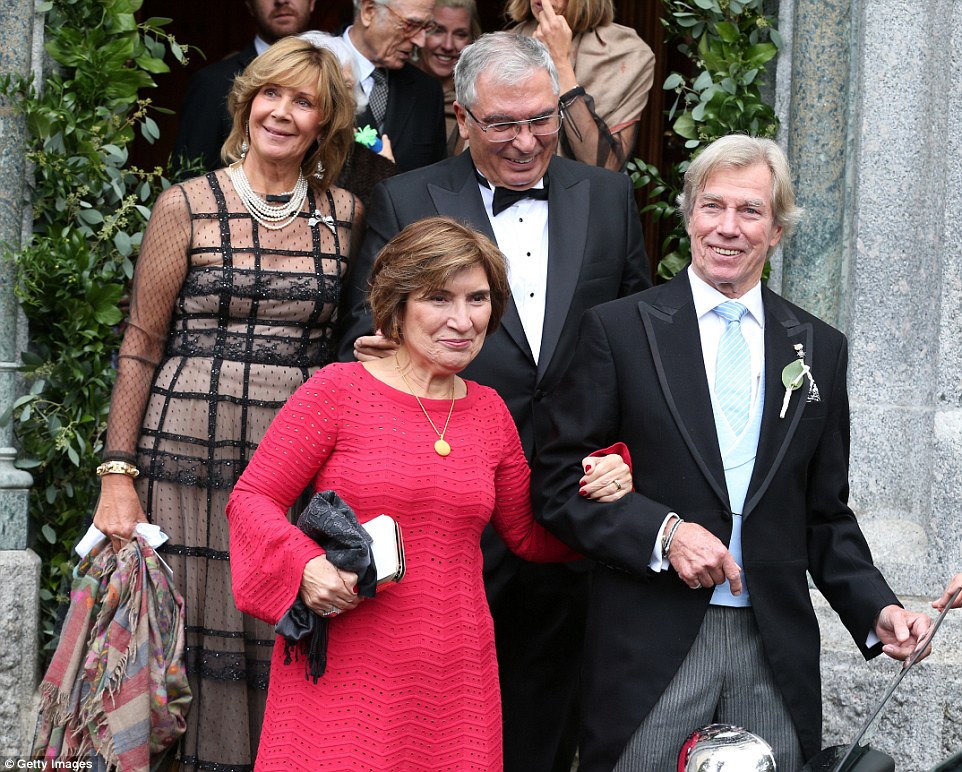 Prince Konstantin is the son of Prince Leopold (far right) and Princess Ursula of Bavaria (far left). They were joined by the bride’s mother Guelseren Kaya (front left) and father Metin

The beaming couple were seen sharing a kiss outside the Eglise au Bois as they left as husband and wife following the ceremony.

Wearing her brunette locks in a chic up-do, the new Princess Deniz accessorised her hair with elegant silver clips, while showing off her glowing complexion.

The bride and groom were joined by flower girls dressed in pretty printed dresses and floral crowns and smartly-dressed page boys who showered them in confetti as they left the church.

Meanwhile, Konstantin and Deniz’s glamorous wedding guests brought out all the stops to ensure they looked the part for the ceremony 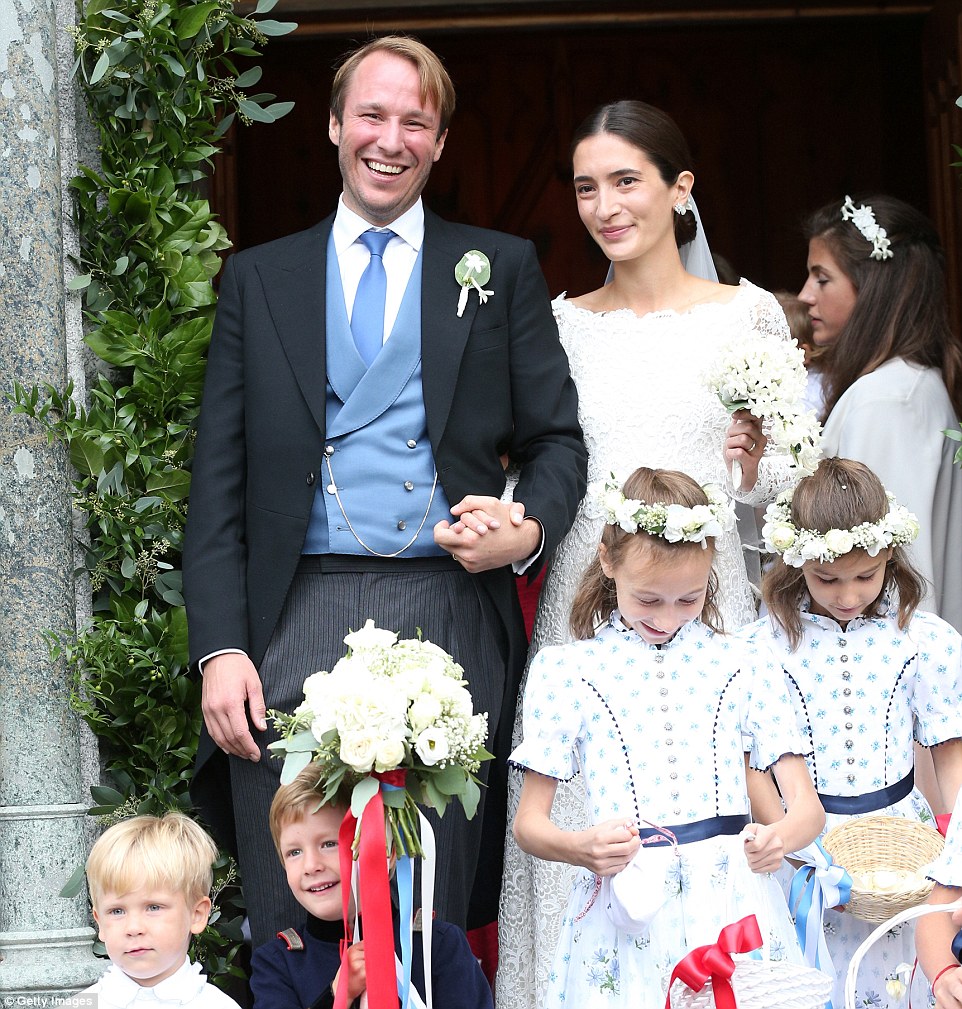 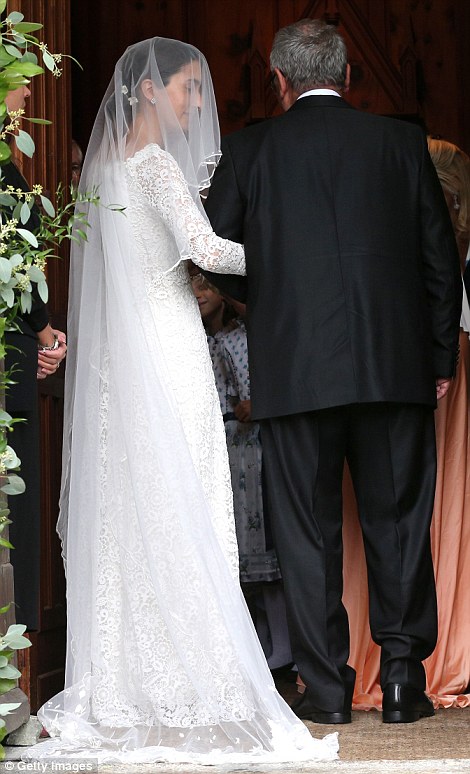 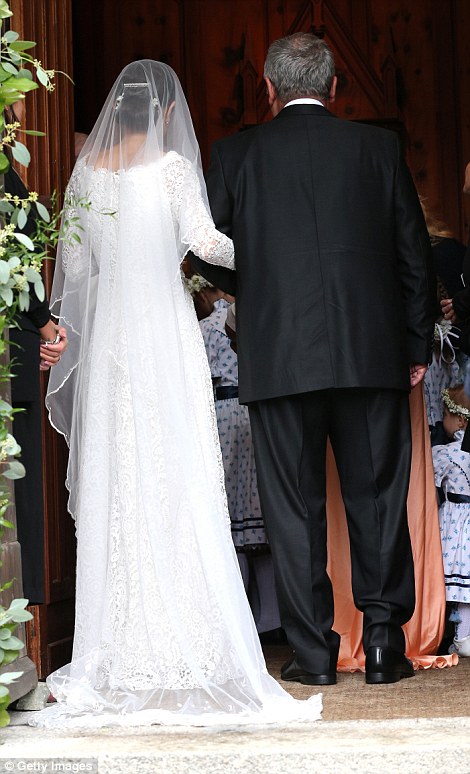 The bride, who looked stunning in an elegant ivory lace gown and a full-length veil, arrived at the church in Moritz with her father Metin Kaya 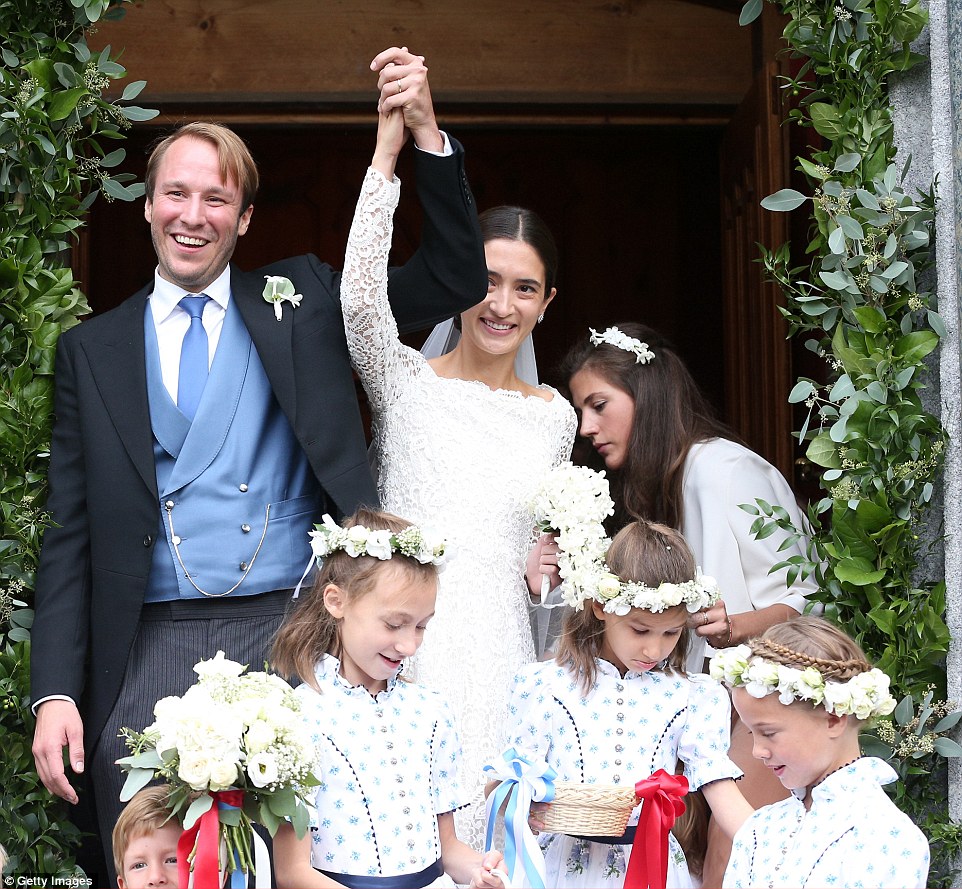 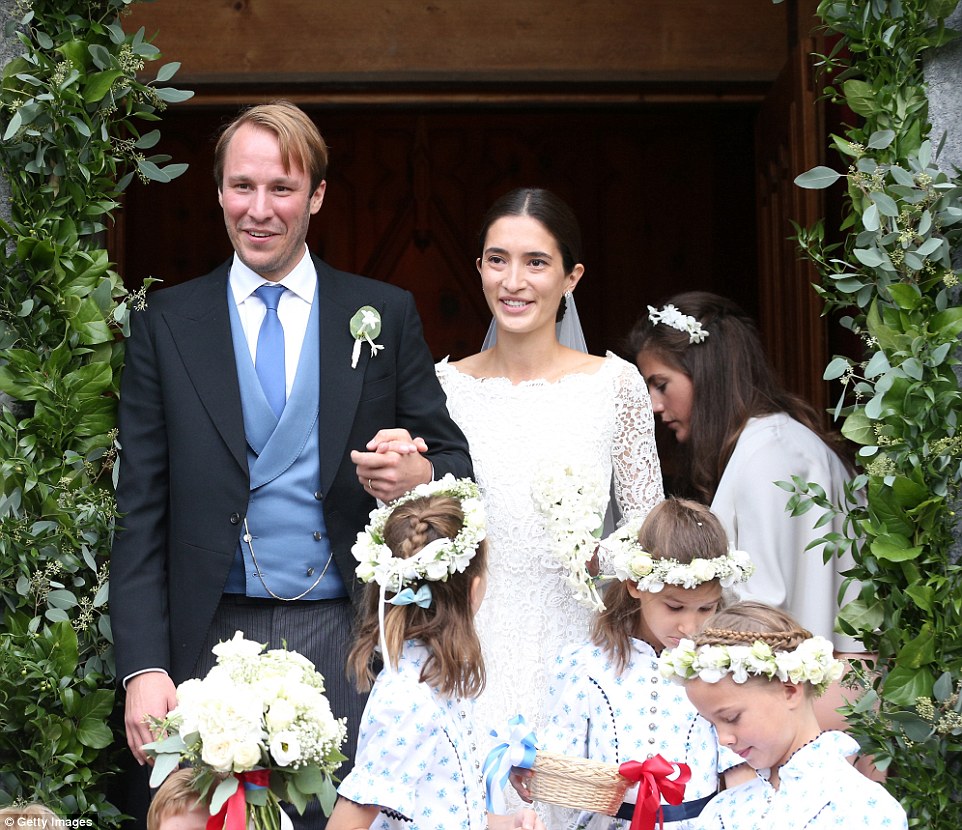 Bride Deniz wore her locks in an elegant up-do, while showing off her glowing complexion with a simple make-up look 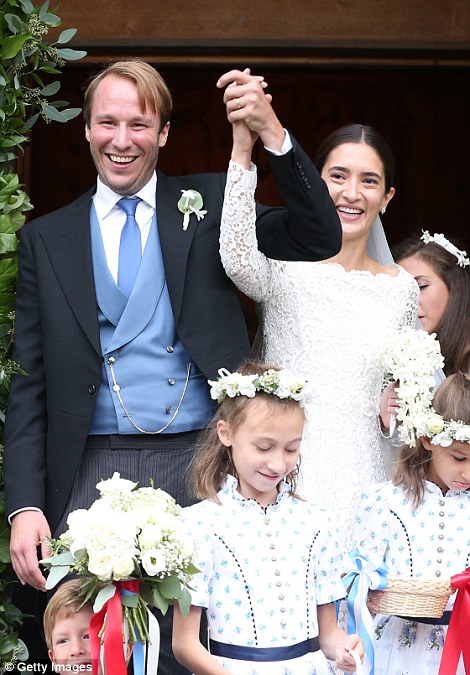 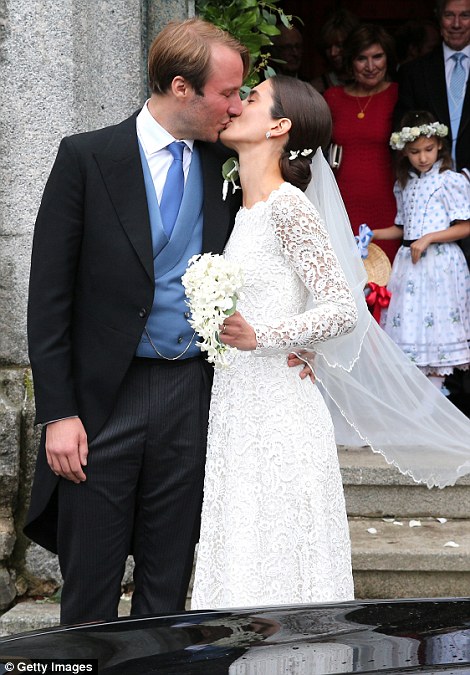 Princess Sofia, 33, looked stylish in a floor-length blue dress, which she teamed with a gold clutch bag, while Carl Philip, 39, opted for a smart tuxedo.

Following the ceremony, the bride and groom hosted a lavish reception and dinner for guestsin the nearby town of Engadine.

Deniz was also officially given the title of Princess Deniz of Bavaria following the wedding on Saturday,

Prince Manuel of Bavaria and his wife Anna were also among the royals in attendance, along with Princess Maria Astrid of Liechtenstein.

Other stylish guests included actress and film director Mafalda Millies, who opted for a stunning floral dress for the ceremony, and Ludvig Andersson, the son of ABBA’s Benny Andersson.

The Bavarian royals ruled in the German region from 1180 to 1918, after King Ludwig II was deposed during the First World War. 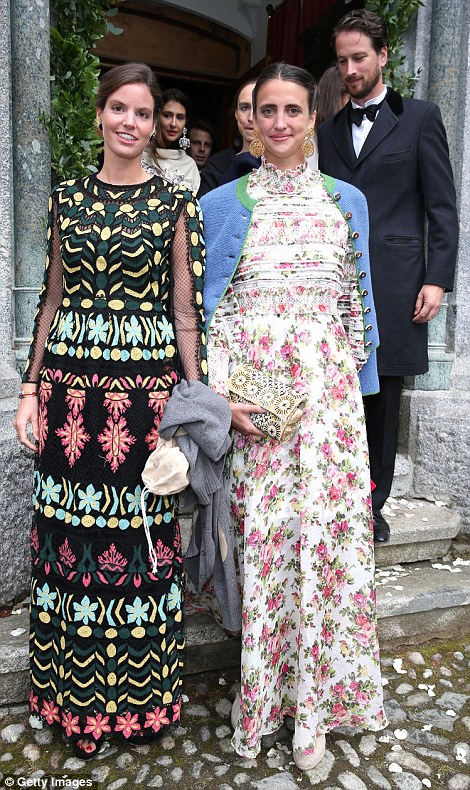 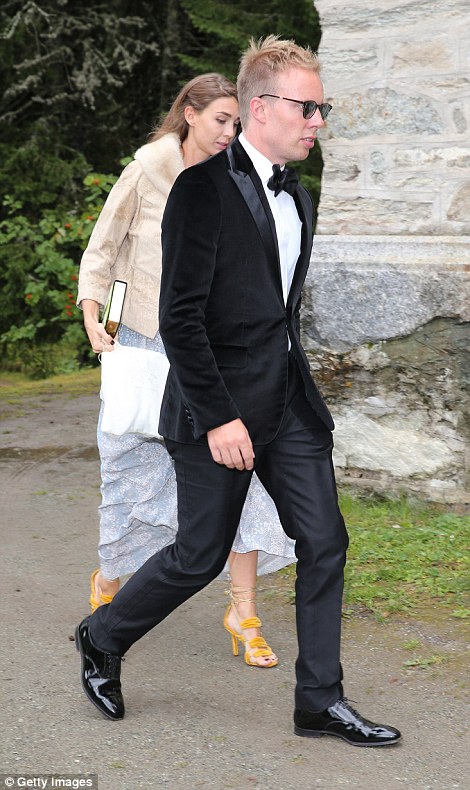 The ceremony was attended by glamorous guests, including Princess Maria Astrid of Liechtenstein (left) and a friend. Ludvig Andersson, son of ABBA’s Benny Andersson, and his wife Mimi Schoeller were also seen arriving at the church (right) 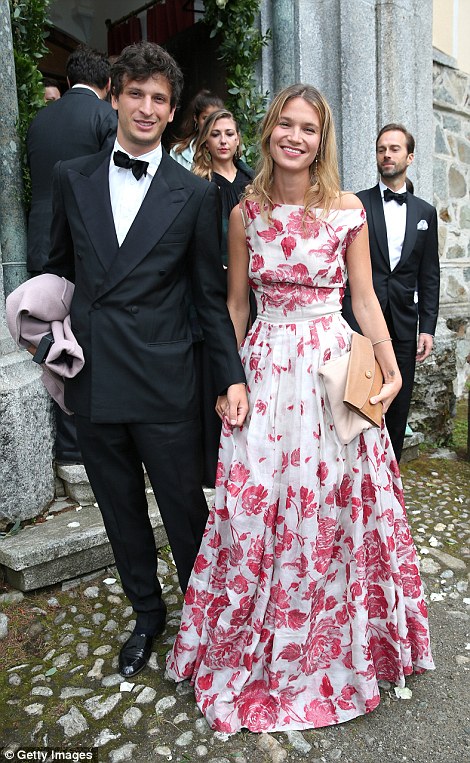 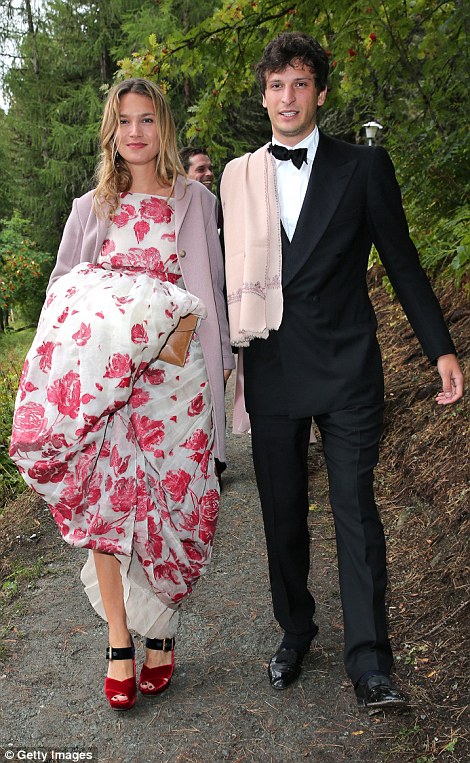 Actress and film director Mafalda Millies opted for a stunning floral gown as she attended the wedding with her boyfriend. Mafalda was later seen lifting up her dress (right) to stop it from trailing along the floor as she left the ceremony 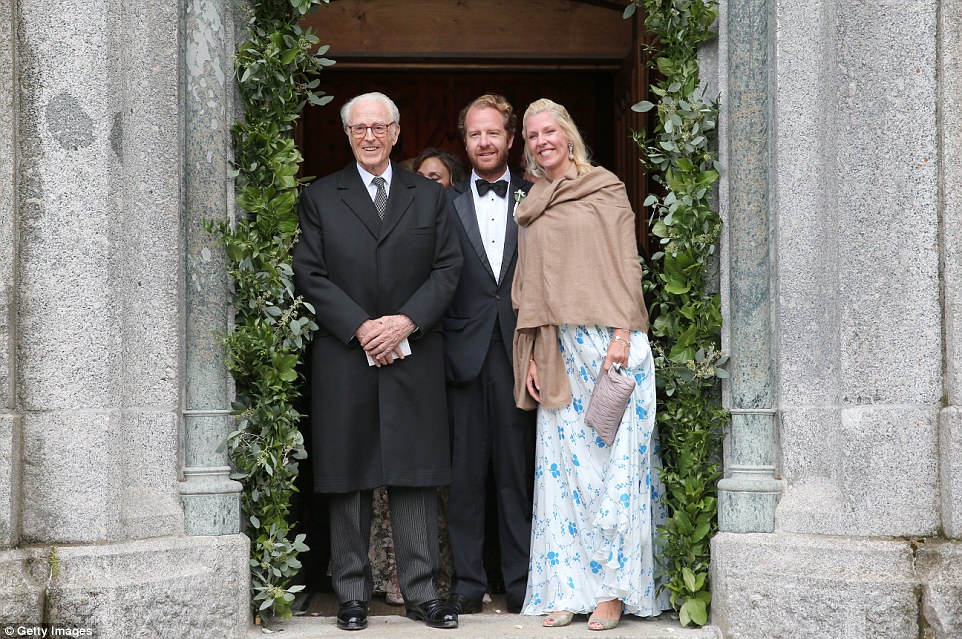 Prince Franz of Bavaria, Princess Felipa of Bavaria and her husband Christian Dienst (centre) also attended the wedding in Moritz 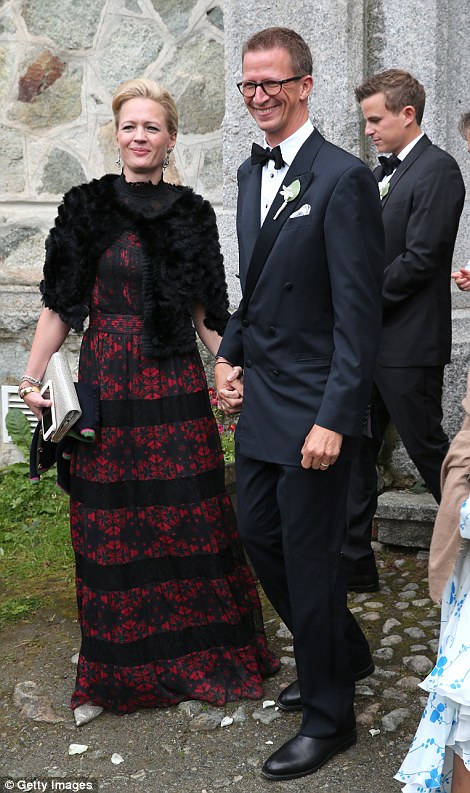 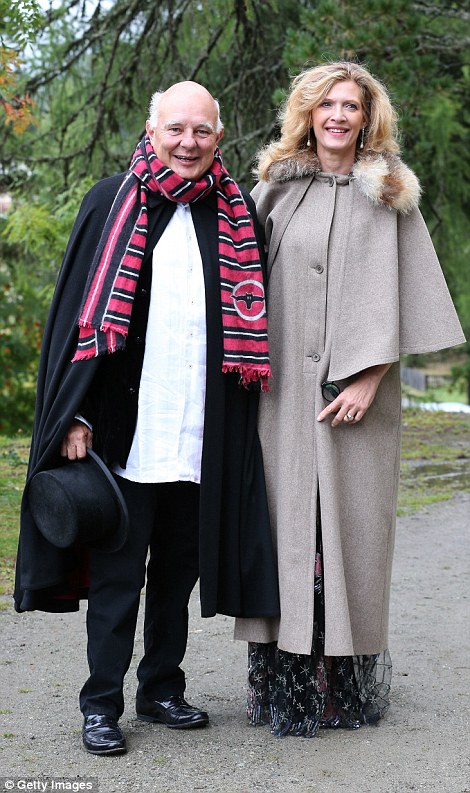 Prince Manuel of Bavaria and his wife Anna of Bavaria were among the guests (left), along with Rolf Sachs and Princess Mafalda von Hessen 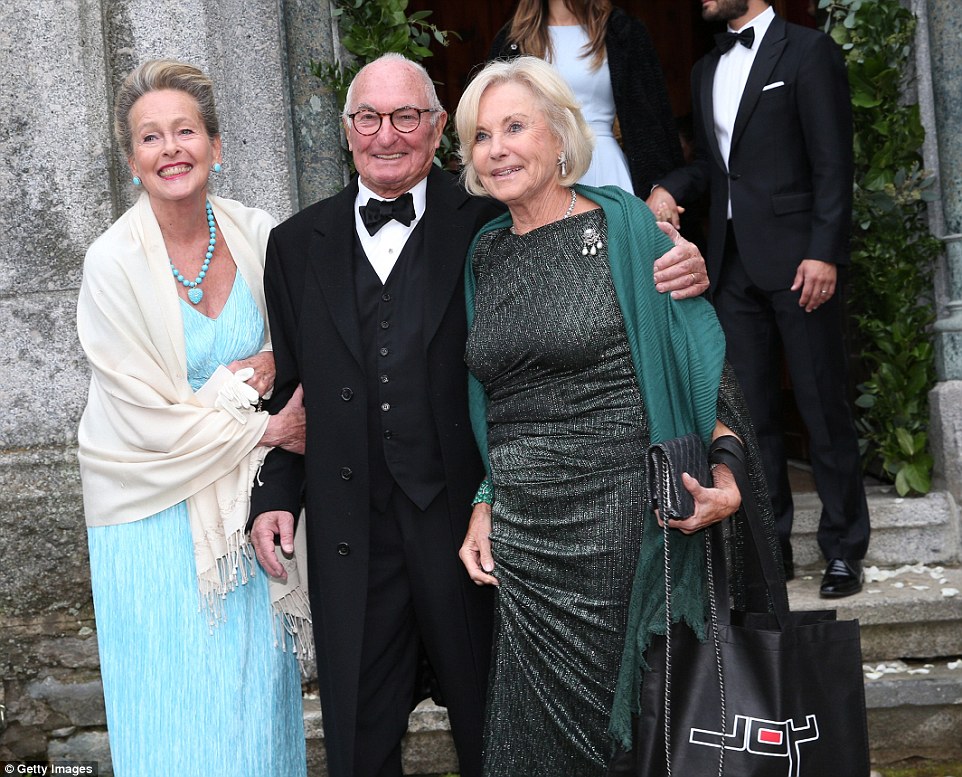 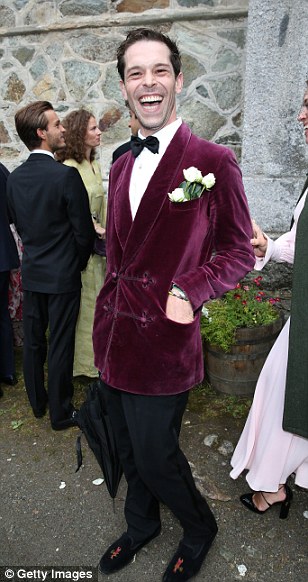 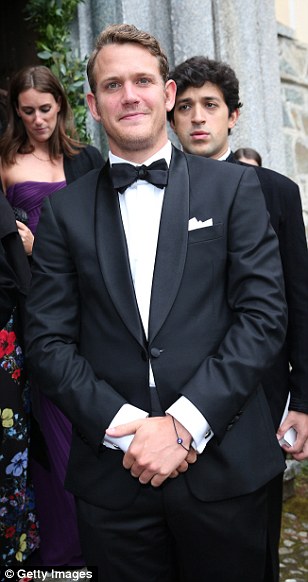 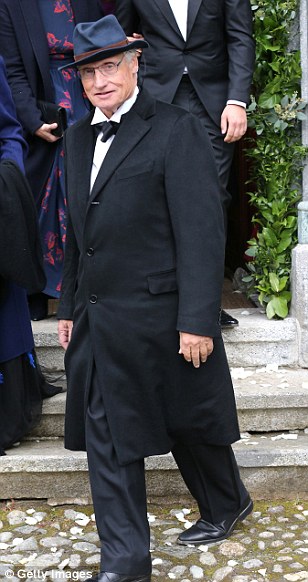 Male guests including Francisco von Boch, Moritz Flick and Prince Ludwig of Bavaria (pictured from left to right) ensured they looked the part for the wedding 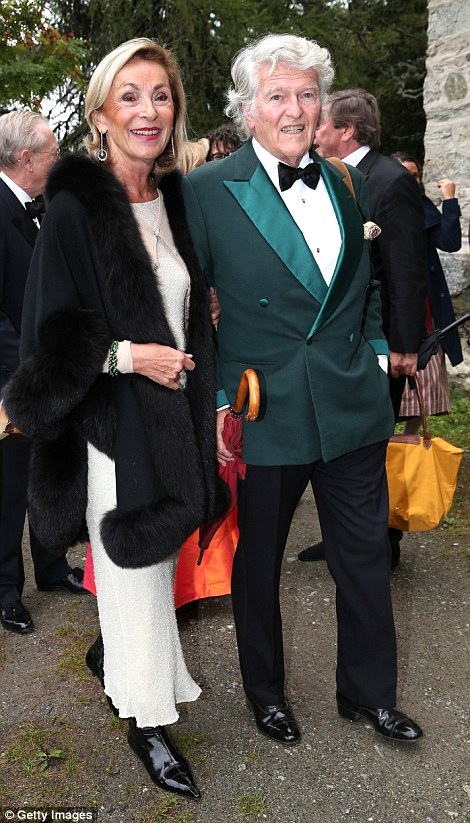 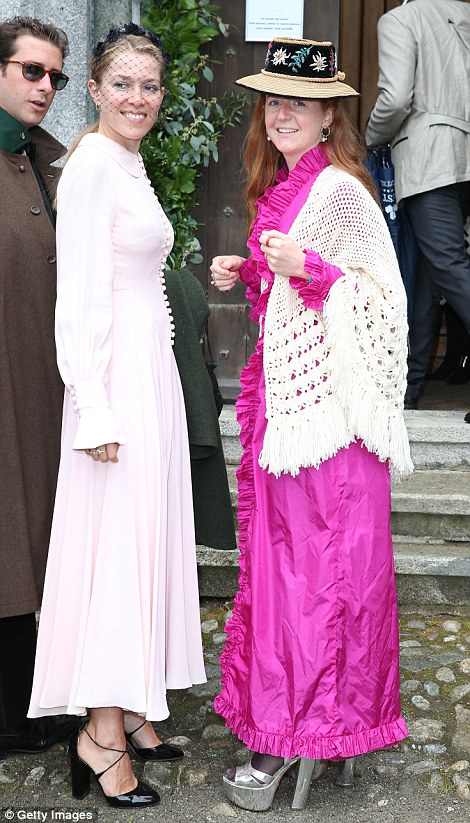 Dad creates amazing giant Game Boy for £40 – and it works