Home » Lifestyle » Put it there … but will we ever shake again?

Put it there … but will we ever shake again?

“Pleased to meet you” we say, thrusting forward an open palm. At least we used to, before COVID-19 pulled the rug from under all our social interactions. Now, getting close enough to a possibly unvaccinated stranger to clasp hands violates all rules of social distancing. Clammy and feeble, or a warm-hearted symbol of positivity, is the handshake in permanent lockdown? Perhaps it has always existed within the uneasy space humans negotiate between our desire for touch and our fear of contamination. 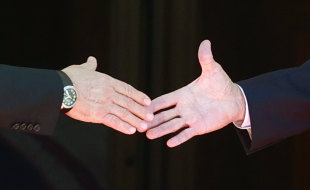 In her delightful, COVID-inspired history of the handshake, Ella Al-Shamahi argues persuasively that a world without handshakes would be a lesser place. True to its subtitle, the book is indeed gripping, its hold is brief and light, friendly rather than crushing. The handshake, she argues, is more than a perfunctory gesture; it is a cornerstone of touch, “the gold standard of human connection”, something many people in isolation have been horribly deprived of.

Al-Shamahi is a palaeoanthropologist; additional – if unexpected – authorial attributes including her being a National Geographic Explorer and a stand-up comic. Her argument that the handshake is biological, that it is part of our DNA, raises the stakes from the first pages. She cites research by evolutionary biologists and primatologists who have studied the ways in which chimpanzees “fingershake”. Did Neanderthals shake hands, she wonders?

These evolutionary insights build her case for the handshake’s deep history. They also allow her to overturn false assumptions about its origins. No, the handshake didn’t arise because soldiers needed to prove that they were unarmed. No, it was not spread across the world by Western missionaries. She points out that in Homer’s Iliad, the Trojan Glaucus and the Greek hero Diomedes meet on the battlefield. Rather than fighting, they make peace: “. . . they sprang from their chariots, grasped one another’s hands, and plighted friendship”.

Al-Shamahi is well attuned to the cultural meanings of the handshake, and its symbolism. She writes about the reappearance of handshaking in her own life, with men at least, after a period of “handshake dodgeball” during what she describes as her “fundamentalist period”. (Al-Shamahi is British, with Yemeni-Syrian heritage.)

As much as we learn about the nuances of handshakes followed by finger snaps or clicks in Liberia, Kenya and Ghana, for example, this is more than a formulaic guide to global etiquette. She traces the emergence of the handshake as a kind of gestural lingua franca, spread by colonisation and globalisation, with its power imbalances and convenient definitions of cultural supremacy. But, she acknowledges, there are no large-scale peer-reviewed studies of greeting diversity over time.

Perhaps post-COVID there will be. Meanwhile, for those out of practice with this mainstay of social interaction, the book includes an endearingly non-prescriptive how-to. The author compares this section to Delia Smith’s “How-to-boil-an-egg” recipe, joking that the best thing to do is to recall Donald Trump’s approach to handshaking and do the opposite. Read the room, she cautions, as you decide how hard to grip and whether to pump and shake. Women in the workplace she notes, are counselled to shake hands decisively, but not too firmly. Somehow the business phrase “let’s shake on it” remains very masculine.

She includes chapters on history’s best and worst handshakes. Reagan and Gorbachev shook hands in 1985, marking the final years of the Cold War. Anwar Sadat and Menachem Begin’s handshake after signing the Camp David peace accords had Jimmy Carter’s hand resting awkwardly in the mix. Princess Diana’s gloveless handshake of a dying AIDS sufferer in London’s Middlesex Hospital in 1987, Al-Shamahi writes, became a powerful image of social justice by a privileged individual. 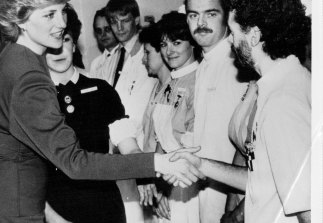 Princess Diana shakes hands with Shane Snape, who had the AIDS virus.Credit:

Shaking hands and kissing babies is required of politicians on the campaign trail, and if they end up with chafed hands from so much meeting and greeting, voters see it as part of the democratic process. In 2004, Mark Latham emerged from a radio interview into the path of his political opponent, then-prime minister John Howard. There was no sportsmanship in Latham’s aggressive handshake. Both men would come to ignominious political ends, but that infamous handshake sped up Latham’s.

Should I ever meet Ella Al-Shamahi, I would tell her about this election-influencing handshake, just as she might recall Boris Johnson proclaiming after a hospital visit in 2020 in the thick of the pandemic that “I shook hands with everyone you know”. He was hospitalised with COVID soon after. But first, I would shake her hand to congratulate her on her lively book.

Phillipa McGuinness’ Skin Deep: The Inside Story of Our Outer Selves will be published next year.