Home » Lifestyle » Sing when you’re winning: Seven’s gamble with The Voice pays off

Sing when you’re winning: Seven’s gamble with The Voice pays off

Seven appears to have reaped the benefits of The Voice after taking over the format from Nine at the end of last year.

The network’s decision to roll the dice on the program paid off early when the show premiered to its largest average audience since 2016, piggybacking off the might of the Olympics Closing Ceremony and drawing in an average audience of 1.329 million metro viewers on August 8. 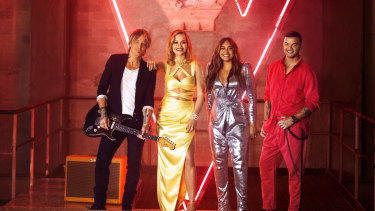 This week, The Voice continued to flex its million-plus muscle across all three of its episodes, with 1.2 million tuning in on Sunday and 1.1 million watching on Monday and Tuesday nights. Since premiering, the show has yet to dip below the million-viewer mark. According to media analyst Steve Allen, Seven has The Olympics to thank for that.

“There is no question that the halo effect of The Olympics is huge for Seven and The Voice,” Allen said.

“The Olympics are the biggest tentpole platform to promote and cross-promote what is upcoming in your schedule, and across the sixteen days of The Olympics, we saw a lot of The Voice. By the time it premiered, audiences were invested in the contestants.”

Seven’s director of production, Andrew Backwell, agreed post-Olympic momentum has played a role in The Voice’s strong showing but believes it is only part of the puzzle.

Instead, Backwell pointed to a shift in relatability and tone as the critical factors behind The Voice’s resurgence. “We wanted it to be a family experience,” he said. “The tone had become too bitchy, there was too much constructed drama between the coaches, we wanted it to be more positive.”

In Seven’s tweaked format, contestants are encouraged to audition with familiar songs.

“I wanted every song that appeared on The Voice to be one that people would know, then viewers can engage and judge the performance,” explained Backwell. 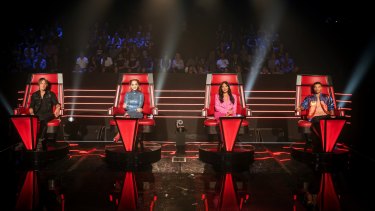 A tweaked format has seen Seven recapture ratings success with The Voice.

Meanwhile, the cap on the amount of times coaches could turn their chairs for a singer has been scrapped.

“That makes it more positive because there are not as many rejections in the show,” said Backwell.

Seven’s success in rejuvenating The Voice will be galling for Nine, which let go of the format last year. “Unfortunately, due to the age of the show and its declining demographic profile, The Voice had become by far the poorest financial performer on our slate,” a Nine representative said at the time. “We wish Seven well in their quest to revive yet another Nine show.”

The network’s premium reality format, The Block, is now being trounced in the ratings by The Voice.

Since the two shows debuted on Sunday, August 8, The Block has averaged 669,000 viewers per night in the five mainland capitals, against 1.25 million for The Voice. Meanwhile, Network Ten’s Survivor: Brains v Brawn has averaged 657,000 metro viewers since debuting on July 18. It is worth noting that both Survivor and The Voice air Sunday to Tuesday, while The Block is on air four nights, Sunday through Wednesday, meaning the average is likely to be lower.

“I imagine there would be regrets internally at Channel Nine about letting The Voice go,” said Allen. “The Voice was skewing older, which didn’t fit Nine’s strategy, but given the size and consistency of The Voice ratings this year, they must be disappointed.”

But Nine CEO Mike Sneesby has backed the media company’s decision not to renew its rights for the show. “We’re really happy with how our programming slate is lining up to the back end of the year,” he said, “and really confident in what is an exceptional content and programming team here at Nine. The reality is The Voice is a very expensive production, it was becoming more expensive.”

Perhaps the most telling challenge for The Voice will be maintaining its strong performance once the blind auditions are over. Historically, these episodes rate strongest, followed by a dip when competition moved into the battle rounds.

This year Seven has ditched the battle rounds (as well as the live episodes) and replaced them with ‘the Cut’, which sees coaches cull their teams down to five acts each. The streamlined season will run for 13 episodes, down from 21 in 2020 and 20 in 2019.

“We’ve compressed the middle of the show; we used to have battle rounds, semi-finals and knockouts. We’ve truncated all of that,” said Backwell.

“So we get through blind auditions, then the Cut gets it down to five people per coach, then we head straight into the finals.”