The NSW government is removing feral horses from the delicate Kosciuszko National Park at barely a third of the rate needed to keep their population under control, the Threatened Species Council said.

Documents received under freedom of information laws by the Invasive Species Council also reveal the parks service appealed to Minister Matt Kean to bolster aerial musters in a bid to drive more of the brumbies into trapping zones so that they can be rehomed outside the park, put down, or sent to knackeries. 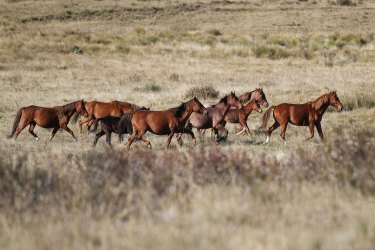 Feral horses cross Long Plain in Kosciuszko National Park. Removal of the animals is falling far short of the numbers necessary to keep the population from growing.Credit:Alex Ellinghausen

Rangers have also been releasing pregnant mares and foals citing animal welfare concerns. In the period from July 2020 to July 2021, staff removed 764 horses but let 315 mares and foals go, the government said.

Conservation director for the Invasive Species Council James Trezise said the current methods were removing only about 32 per cent of the horses needed to keep herds steady. The hard-hoofed herbivores can triple in little more than three years if conditions permit.

“The population is spiralling out of control, and there’s going to need to be a severe reduction at some point in the future,” Mr Trezise said, adding that releasing mares was “the biggest problem because they are going to breed”.

A draft management plan prepared in 2016 recommended the number of horses be reduced to 3000 in five to 10 years’ time and eventually to about 600 over two decades. Opposition from some community groups eager to promote the horses’ heritage value prompted the government to ditch the plan and instead protect them despite the threat they pose to already endangered species including the southern corroboree frog and alpine ecosystems.

The government was due to release a new draft plan at the end of June, with speculation mounting that 3000 will remain a target figure.

“The plan will outline how we intend to protect the ecological values of the park by reducing the impact of wild horses, while also acknowledging their heritage value,” Mr Kean said. “Our latest count estimates the population of wild horses in the park is 14,000 – a number that is almost universally accepted as too many.”

Advice prepared by the NSW National Parks and Wildlife Service for Minister Kean noted that just over a third of Kosciuszko National Park had been affected by the 2019-20 bushfires, one of the documents showed. It called for the use of “experienced and reputable New Zealand wild horse mustering personnel to provide advice on aerial mustering in the park”.

“However, historical rehoming rates have always been low due to the lack of demand and/or lack of suitable homes,” the March 2020 document prepared by the Parks Service said. “As such, horses that cannot be rehomed will be shot in trap yards (where this is the most humane available method), with carcasses sent to a knackery, or transported live to a knackery.”

Labor environment spokeswoman Penny Sharpe said the draft plan’s consultation period meant it could be months more before it could be finalised and necessary action taken to curb horse numbers.

She pointed to the past week’s statement by Minister Kean that the government had identified 93 threatened species as so-called assets of intergenerational significance, and 221 sites where they are found. Kosciuszko National Park counts 34 of those species and 37 such sites.

A spokesman for the Parks Service said the draft plan had taken input from the Community Advisory Committee and the Scientific Advisory Panel, and the public would have at least 30 days to comment.