As the magazine turns 50, a former editor says… It’s gone all woke. But today’s young women need the old Cosmo’s racily honest advice as much as ever

With hindsight, it was like a scene from Mad Men. A bubbly blonde sits on a conference table, legs crossed, wielding a glass of fizz. Spirals of cigarette smoke curl into the air as she holds three besuited men in her thrall.

The year was 1972 and the men included soon-to-be ad agency owner (and, much later, ex-husband of Nigella Lawson) Charles Saatchi and ad exec Tim Bell, who went on to become Baron Bell, close adviser to Margaret Thatcher.

Former Sun journalist Joyce Hopkirk was the woman briefing these up-and-coming Titans of the ad world to create a sexy campaign for a revolutionary new monthly magazine called Cosmopolitan. It would go on to smash sexual taboos and spawn a generation of ‘Cosmo girls’.

Now, as Cosmopolitan celebrates its 50th birthday, I’m proud to say that not only did I witness this meeting from the far corner of the office — as a wide-eyed 20-year-old junior copy editor — but I also went on to become Cosmo’s editor for five years in the mid-1980s. 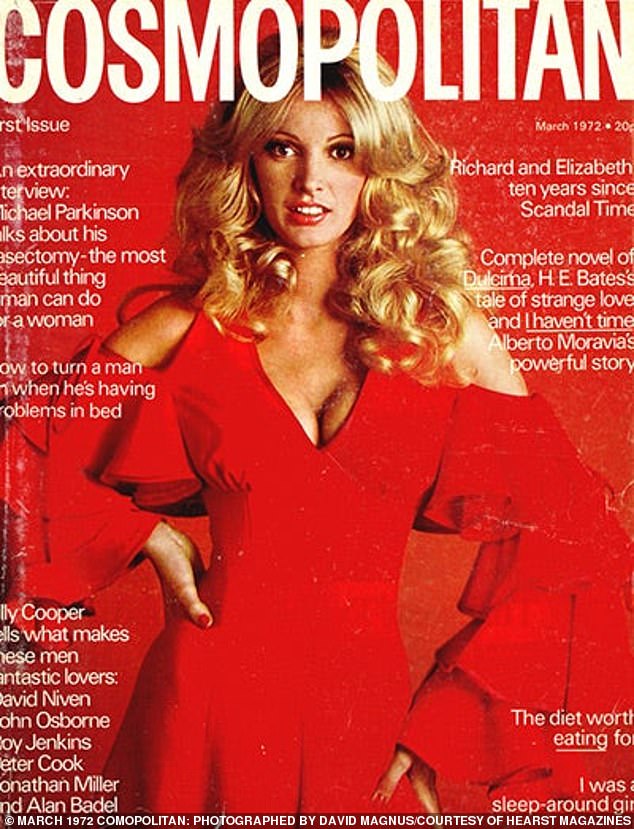 As Cosmopolitan celebrates its 50th birthday, Linda Kelsey reflects on the magazine’s appeal throughout the years. Pictured: The magazine’s first cover in March 1972

In a world where so many magazines have closed, it’s quite a feat that reading Cosmo remains a rite of passage for so many women.

To say that this glossy magazine changed lives — mine included — might sound grandiose but half a century ago, there really was nothing like it. In the UK, it was still too early for Elle, Marie Claire, Red, Glamour — and there were no celebrity magazines at all. We had upmarket Vogue and Harper’s Bazaar, the popular, not-at-all-glossy women’s weeklies, the sprightly Honey — nice but rarely naughty — and Nova, a supersmart, feminist magazine too rarefied to be mainstream.

The tagline for the TV ad that Saatchi and his crew came up with emphasised the defining preoccupation: ‘Cosmopolitan, the sensational new magazine for women who are interested in men, love, passion, food, men, travel, films, beauty, themselves . . . and men.’

No mention of sex, note, though the implication was obvious, spoken over the image of an attractive couple in bed, dressed in little more than satin sheets.

The first cover in March 1972 was an iconic 1970s glamour image, bold red on bold red, a model with big, blonde, stylised hair and maximum cleavage.

And the coverlines confirmed the rumours that sex-mad Cosmo, hot on our shores from America, where it was first published, was about to cause ‘morality’ campaigner Mary Whitehouse conniptions.

Take, for example, ‘I was a sleep around girl’. What young woman — or indeed man — could resist reading that? Or ‘How to turn a man on when he’s having problems in bed’. I mean, who even discussed such things in public?

Then there was the celebrity exclusive: ‘Michael Parkinson talks about his vasectomy’, cheekily billed as ‘the most beautiful thing a man can do for a woman’. 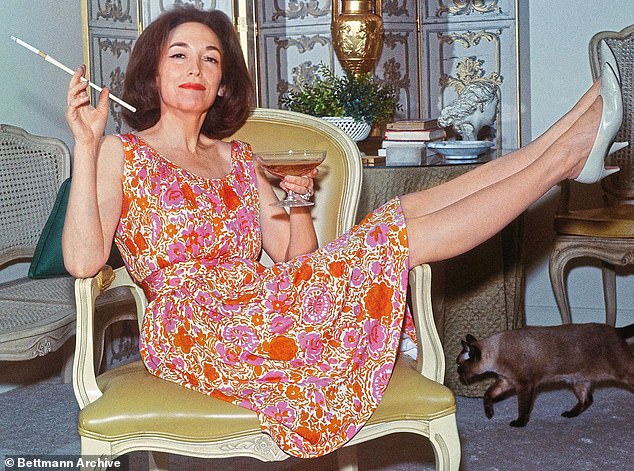 To cap it all, there was Jilly Cooper, already a household name as a columnist though not yet a best-selling author, deciding why men like actor David Niven and Roy Jenkins, then the decidedly unhunky deputy leader of Labour, are fantastic lovers. Had she personally road-tested them or was it mere speculation? You’d have to read the magazine to find out.

Over the ensuing decades, Cosmo’s content broadened significantly — campaigning for more female representation in Parliament and the workplace, encouraging women to become tech savvy and calling for domestic violence to be taken more seriously by police and the Government. But it was its sexual exuberance that defined it — and without it, Cosmo would have run out of steam.

If there is one person to thank for the worldwide phenomenon that Cosmopolitan became — with editions everywhere from India to Kazakhstan — it is infamous American editor Helen Gurley Brown. She had previously written the scandalous 1962 bestseller Sex And The Single Girl, which was made into a film starring Natalie Wood and Tony Curtis.

Helen once told me that if you were single and having sex in the early 1960s and there was no marriage proposal in sight, conventional wisdom was that ‘you might as well put your head in the oven’. She wanted to change all that — and she did.

‘Marriage is insurance for the worst years of your life,’ she said. ‘During your best years you don’t need a husband.’ Given that she remained happily married to her one husband for 51 years, before he died aged 93, this might seem disingenuous. But I think she meant that if you marry too young, you’ll miss out and may regret it.

Although Helen was the U.S. editor and we followed our own path, her ethos permeated every page. One phrase she coined that you will know is ‘Having It All’. For Helen it meant ‘love, sex and money’ — the money courtesy of a career (and possibly a rich man, too) — but kids were never mentioned. She didn’t want them, and they barely featured in Cosmo.

When later generations misconstrued Helen’s original notion and began to see ‘Having It All’ as incorporating a relationship, a career and children — and unsurprisingly found it all rather overwhelming — Helen got a lot of flak. The 1970s proved to be a landmark decade for women — and Cosmo was at the centre of it all, reporting on such defining moments as the passing of the Sex Discrimination and Equal Pay Acts. By the end of the decade we had our first woman prime minister in Mrs Thatcher.

At the same time the sexual revolution was hotting up with women huddling around mirrors at ‘getting to know your vagina’ classes. The first Ann Summers sex shop opened, primarily aimed at men, but quickly switched to target a neglected female market with crotchless knickers something of a speciality.

The Hite Report, a ground-breaking survey on women’s sexuality, told the world what women already knew but were embarrassed to admit — that penetrative sex doesn’t always end in orgasm. This, Cosmo felt, was important for men to understand. 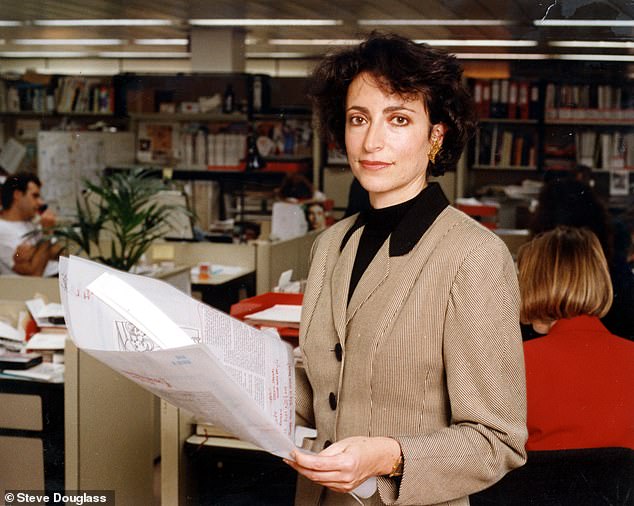 Linda (pictured) said some of her best times involved shaking up the Cosmo formula, like when she put Bob Geldof on the Christmas cover the year of Live Aid

Even when I was promoted to food and decorating editor, everything had a sexy slant. On one occasion I was sent to recreate Manet’s painting Le Déjeuner sur l’herbe in London’s Hyde Park, featuring two well-dressed men and a naked woman on a lunchtime picnic outing, recipes included. Soon after the photographer started shooting, the police turned up and shooed us away, but fortunately we had the image we needed.

Another new concept at the magazine was the naked male centrefold, a larky riposte to Playboy’s nude pin-ups. Burt Reynolds is probably Cosmo’s most famous male nude. Published in 1972, it was an image that was quintessential Burt: the moustache, the smile, the charm, a cigar — and a judicious use of shadow.

Our first British male centrefold, in the same year, was Welsh builder Paul du Feu, best known for his brief marriage to Germaine Greer. He joked that by appearing in the magazine, he was ‘striking a blow for male servitude’.

As Cosmo light-heartedly declared to shocked moralists: ‘We think the real reason why many girls are annoyed at being considered “sex objects” is that they weren’t, until recently, permitted to return the compliment.’ It was hard work persuading men to strip off in those days and we were never convinced readers cared much about seeing boys in the buff. Within a couple of years the centrefolds were dropped.

It was a couple of decades before they were reincarnated in conjunction with charities such as Everyman to raise awareness of testicular cancer. As a result Princess Anne’s son-in-law Mike Tindall, Alex James of Blur, Strictly’s Bruno Tonioli and dozens more all dared to bare.

Cosmo never encouraged promiscuity, despite being accused of it. What it said was that young women were as entitled to enjoy sex as young men, and say yes if they wanted to without being labelled a ‘slut’.

The female orgasm took centre stage with articles like ‘Orgasm — the most over-exposed sexual worry’, ‘Men fake orgasms, too’ and ‘Are those sex tips really necessary?’. When I became editor in 1985, the spectre of Aids loomed large, so I eased up on the sexual free-for-all.

The controversial cover line I was most proud of was ‘Smart girls carry condoms’. It was a way to encourage young, sexually active women to realise that being on the Pill might not offer the required protection.

Some of my best times involved shaking up the Cosmo formula, like when I put Bob Geldof on the Christmas cover the year of Live Aid, clutching his little daughter in his arms. Santa Bob we called him. Helen did not like it, but by this time Cosmo’s UK success meant she mostly left us to get on with it.

Each successive editor has been tasked with navigating the sexual mores of the times for a new generation of young women. When Marcelle d’Argy Smith succeeded me as editor in 1990, by which time Aids appeared less of a threat to the straight and careful, she declared, on the cover: ‘We’re all at it — Sex is back!’ She also appointed a political editor, combining smart and sexy.

I grew up in the era when a glossy magazine like Cosmo was a uniquely affordable treat. Young women couldn’t wait for the latest edition — though often you’d discover your boyfriend had nicked it to read himself. It was one of the ways we, and men, too, learnt about relationships.

Helen would probably turn in her grave at the current incarnation. Take the 2018 cover conceived by then editor Farrah Storr, featuring an obese, multiple-tattooed poster girl for body inclusivity. Helen was fattist in the extreme, barely ate and worked out all the time.

Meanwhile, glossy magazine sales have plummeted. I recognise that digital diversification is essential, but for me there’s nothing quite like curling up on the sofa with your brand new glossy magazine and a glass of wine.

That said, I can’t help wondering if it’s me who’s showing her age or if Cosmo has rather forgotten its mainstays — love, men and sex will always be topics we want to know more about.

For all the easily accessible info available on the internet, I think young women need as much — if not more — help navigating the tricky waters of relationships in 2022 as they did 50 years ago.