The nation’s big business lobby group is asking the government to extend paid parental leave and provide more generous childcare subsidies, commit to net zero carbon emissions by 2050 and spearhead a national deregulation agenda in a bid to boost the economic recovery.

The Business Council of Australia’s pre-budget submission released on Wednesday morning includes a swathe of policy suggestions to help lift workforce participation and improve the financial future of the nation following the coronavirus pandemic-induced recession, warning the government not to rely on the economy’s remarkable short-term recovery. 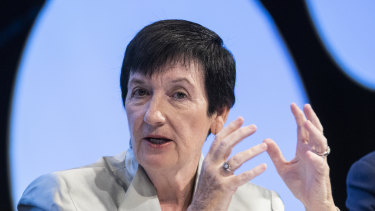 BCA chief executive Jennifer Westacott said expanding the economy by 1 per cent a year, or about $20 billion, would leave each Australian $770 better off annually and help boost employment. The industry group’s members include the chief executives of the nation’s 100 biggest corporates.

“[We] need to grow faster than the below 3 per cent growth rates we were experiencing prior to the pandemic,” Ms Westacott said. “Right now, we have a window to begin reshaping our economy to create new and better jobs, equip people with world-leading skills and pay higher wages.”

She acknowledged the upcoming budget, due to be handed down in May, couldn’t solve all the structural problems immediately but could help position the country for long-term growth. To get back to the pre-coronavirus trajectory the economy would need to grow at more than 4 per cent a year until 2023-24.

“Our focus is on four priorities: reopening the economy, putting in place the fiscal settings for recovery and growth, rebooting business investment and fine tuning a workforce recovery strategy,” she said.

A major focus for the business group and the federal government is reducing unemployment and improving workforce participation and productivity. The jobless rate surged during the pandemic to 7.5 per cent at the peak of restrictions put in place to stop the spread of the virus and has since fallen back to 6.4 per cent on the latest available official measure.

The recovery has been sharp but unemployment is still substantially above the 5 per cent recorded in January 2019 before the crisis.

In addition to more skills training and funding, the BCA specifically wants women’s workforce participation to be boosted, which currently lags 10 percentage points below men’s. Changing the childcare subsidy taper rates is one of the recommendations, including increasing the maximum amount available for low-income households to 95 per cent of the hourly rate. Increasing government paid parental leave to 26 weeks is also recommended, as well as an extra two weeks’ incentive for couples sharing leave.

Longer term reforms are also on the wish list, including for the government to “formalise its commitment to a net-zero emissions by 2050 target across the economy and progress work on defining a policy pathway to achieve this target”.

One of the concerns facing the federal government and the business community is the 28-year low of business investment as a share of the economy. The BCA wants to see a deregulation agenda driven through national cabinet, which was set up during the pandemic so state and territory leaders and the Prime Minister could meet to deal with national issues.

“Support is needed for the major projects with the big multiplier effects through the economy and ongoing investment incentives for energy projects,” Ms Westacott said. “We need to do everything we can to encourage big companies to make the large investments that will transform the economy and set us up for growth.”

She said the federal government was right not to extend JobKeeper, which is due to end later this month, but warned a stop-start opening and closing of the borders and shutdowns after small cases would stifle the employment recovery. The Business Council previously called for borders to open in line with the vaccine roll out.