Horrified critics slam foodie’s ‘pasta grazing table’ after she served spaghetti smothered in three sauces on tin-foil – so do you agree?

Elaborate grazing boards overflowing with cured meats and colourful fruit became a fixture in parks across Sydney during the city’s latest lockdown.

But one woman marked the end of almost four months of shutdown by serving her friends a grotesque take on the picnic trend – made entirely of pasta.

In a video posted to TikTok, the creative cook is seen covering a table with tin foil before dolloping spaghetti across it and smothering it with three kinds of sauce.

‘Yesterday’s pasta night with the girlies!’ she wrote in the caption. 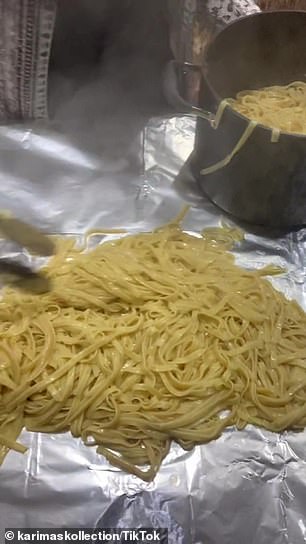 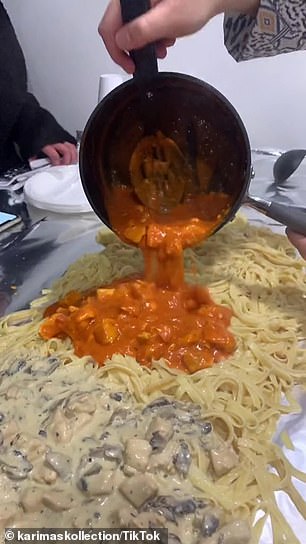 Do you approve of ‘pasta grazing boards’?

Do you approve of ‘pasta grazing boards’?

The now-viral clip, which has been viewed 319,000 times since it was uploaded online on Wednesday, sparked horrified responses, with disgusted viewers demanding to know where the inspiration had come from.

‘You literally could have just done that on your own plates. Put pasta on each plate, and everyone pick their own sauce,’ one woman wrote.

Another added: ‘Why not just put it in three big serving bowls, something classy?’

Others blasted the woman for mixing dishes that don’t go together.

‘Mmm, pasta mixed with different sauces and the taste of aluminum foil. Mmm!’ said one, while a second said: ‘But they’re touching?’

A third called it ‘simply unnecessary’.

But some were more concerned about an alleged food safety issue.

‘Acidic food and aluminum foil is a big NO. Aluminum is significantly more likely to leach into food,’ one woman wrote.

While it is true that some aluminum is absorbed into food when cooked in aluminum foil or with aluminum cookware, and that this is enhanced in acidic foods, it is not true this causes any health effects in healthy adults.

Your body absorbs less than 1 per cent of the background aluminum in food or drinking water, according to research from the European Food Safety Authority.