The Mumsnet thread was kickstarted when one UK-based woman explained she was suspicious of her friend’s boyfriend and thought he might be living a double life.

It prompted an outpouring of alarming stories from other people who knew men who had been caught deceiving their current partners while continuing a relationship – and sometimes having a family – with someone else.

One woman recalled how her husband’s uncle had a live-in girlfriend in the country he was working in for six years, while a second told how her dad had another family for several years without her mum knowing – until his secret lover turned up at the house with two kids. 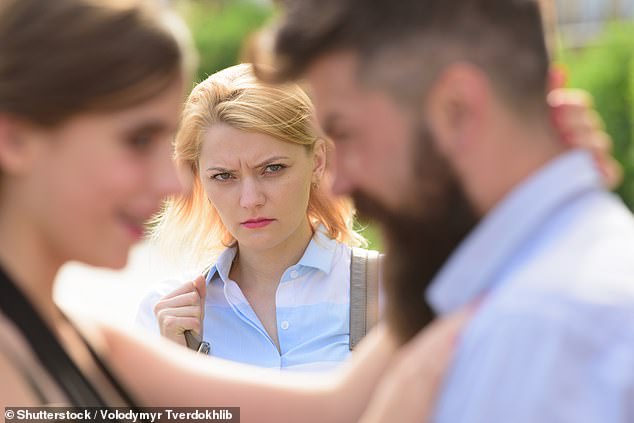 A woman, from the UK, who is suspicious of her friend’s boyfriend, has asked whether he could be leading a double life, prompting numerous revelations of secret families. Pictured, stock image 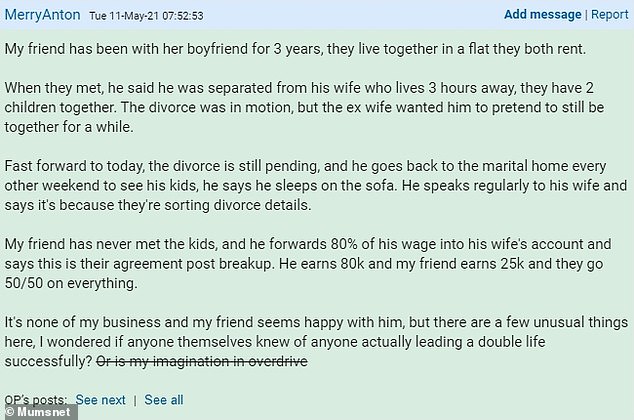 Posting anonymously on the UK parenting website Mumsnet, the woman, who goes by the name MerryAnton, said her friend had been with the man for three years and they lived together (pictured)

In the initial post, the woman penned: ‘My friend has been with her boyfriend for 3 years, they live together in a flat they both rent.

‘When they met, he said he was separated from his wife who lives 3 hours away, they have 2 children together. The divorce was in motion, but the ex wife wanted him to pretend to still be together for a while.

‘Fast forward to today, the divorce is still pending, and he goes back to the marital home every other weekend to see his kids, he says he sleeps on the sofa. He speaks regularly to his wife and says it’s because they’re sorting divorce details.’

She continued: ‘My friend has never met the kids, and he forwards 80% of his wage into his wife’s account and says this is their agreement post breakup. He earns 80k and my friend earns 25k and they go 50/50 on everything.

‘It’s none of my business and my friend seems happy with him, but there are a few unusual things here, I wondered if anyone themselves knew of anyone actually leading a double life successfully?’ 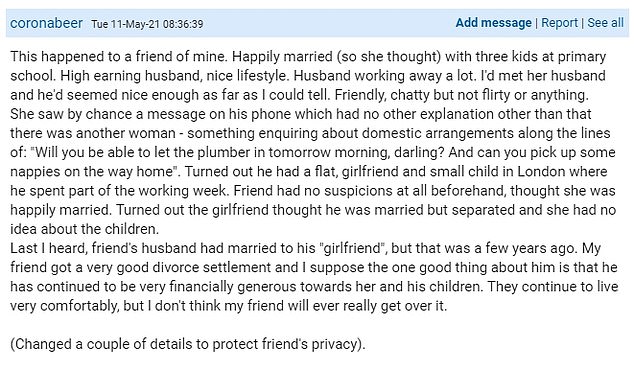 Many people shared their stories, with one adding that it might be ‘more common than we think’ for people to be leading double lives (pictured)

Many were in agreement with the woman’s theory, with one writing: ‘Your friend is very naive. …. or deliberately turning a blind eye.’

A second commented: ‘Dose your friend realise she is the other women ??’ (sic),’ while a third added that the woman’s friend was just ‘seeing what she wanted to.’

She went on to say her husband’s uncle had led a double life and penned: ‘That’s just very probably your friend being naive, has she met any of his friends and relatives? That’s her seeing what she wants to.

‘Aunt was at home with three children in a very beautiful house. Transpired he had a live in girlfriend in the country he was living in for almost six years. They divorced.’

Fellow users were quick to share their stories of similar situations, with many adding that those who led double lives often had children with other women.

One commented: ‘My uncle had a marriage and three kids to his wife and a girlfriend with two kids to her – nobody knew a thing.

‘They only found out about each other when the girlfriend put a picture of him and their kids in the local paper for a fathers day section.’

Fellow users were quick to share their stories of similar situations, with many adding that those who led double lives often had other children to other women (pictured)