Home » Lifestyle » Yes, a European cruise should be on your 2023 holiday wishlist

Yes, a European cruise should be on your 2023 holiday wishlist 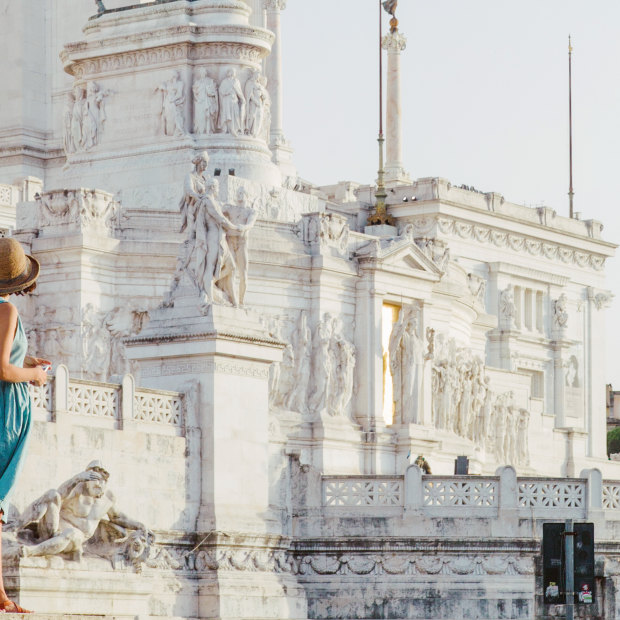 Ahead, seven varied itineraries that epitomise the delights of European cruising. Credit:Stocksy

Europe’s coastlines and rivers take you through thousands of years of history and culture and an exhilarating array of languages, cuisines and lifestyles. Landscapes range from glaciated fjords to sun-sparkling Mediterranean islands, and you’ll find an array of wonderful experiences in every port.

The cruise This 12-night round-trip from Southampton adroitly combines bucket-list sights with lesser-known but rewarding small ports, while days at sea encourage relaxation.

Highlights The sail into Lisbon, draped over hills and fronting the Tagus River, will have you pacing the deck, while the Portuguese capital’s tangle
of time-worn streets makes for great idle wandering. Pilgrim destination Santiago de Compostela, reached on an excursion from La Coruña, is a must.
Ashore Seville and Granada are superb, but if you’ve been there before the ports of Cadiz and Malaga are both charming cities with histories enhanced by vibrant local life. Cartagena is a hit, thanks to its magnificent Roman amphitheatre. On board The 2061-passenger Queen Victoria has old-fashioned style and sophistication that recalls the heyday of transatlantic liners: think afternoon teas, ballroom dancing and dressing for dinner. Pools, a spa, shops, daytime education programs and evening entertainment keep you amused.

The cruise This nine-day jaunt from Civitavecchia (Rome) to Trieste near Venice offers a lovely snapshot of some of the central Mediterranean’s key destinations, and takes in two other countries, Malta and Slovenia.

Highlights The approaches into Naples in Italy, with its island-scattered bay backed by Mount Vesuvius, and Malta’s Valletta, where houses and churches rise atop the magnificent sea fortifications. Dubrovnik in Croatia is another well-preserved fortified town. 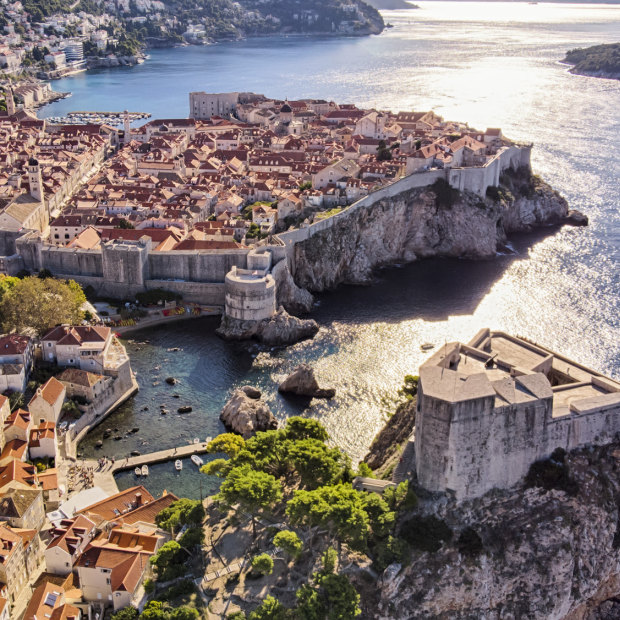 Ashore Get to know some lesser-visited but marvellous Italian cities. Ravenna was capital of the Western Roman Empire and is crammed with early Christian art, most notably stunning mosaic work. In Sicily, Palermo preserves glorious Norman-era architecture, while baroque Syracuse has impressive ancient Greek ruins.

On board Norwegian Viva, which can carry 3099 passengers, launches in July 2023 and boasts innovations such as Infinity Beach’s expansive pool decks, the outdoor sculpture garden in The Concourse, and a charcoal sauna. Abundant kids’ activities include waterslides, sports facilities, a flight simulator, speedway and Aqua Park.

The cruise This eight-day trip between Avignon and Lyon on France’s Rhône River is a short but sweet drift through medieval history, van Gogh’s art and vineyards.

Highlights Banished Popes put Avignon on the map and left behind
a whopping feudal palace and the superb Pont du Gard aqueduct nearby. The Rhône landscape is best at castle-crowned Tournon, from which Côtes du Rhône vineyards run up hillsides backed by the snowy French Alps.

Ashore Arles, with its pastel houses and golden sunlight, feels like strolling through a van Gogh canvas. The medieval pile of Viviers is topped by
an ancient cathedral, and Vienne has startling Roman remains. Make the most of Lyon, one of France’s prettiest cities and noted for its gastronomy. 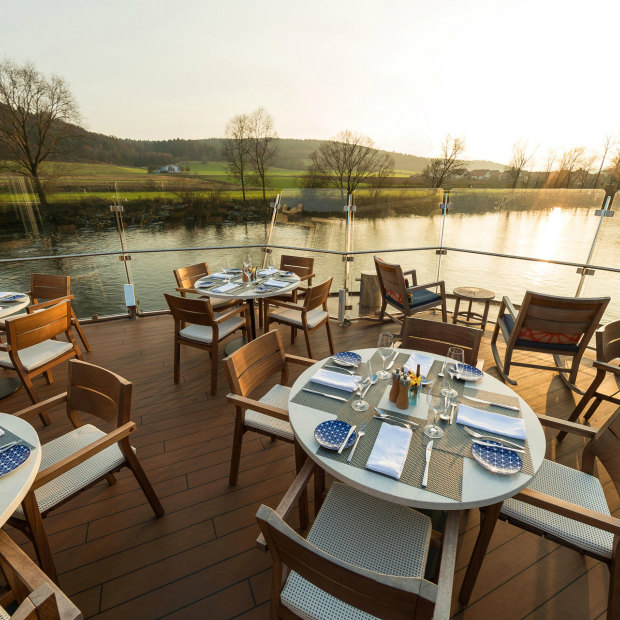 The Aquavit Terrace on the Viking’s Longship.

On board The 190-guest Viking Delling, Viking Heimdal or Viking Buri are near-identical, notable for swathes of viewing glass, sleek Nordic design and airy public areas. Muted décor and sophisticated lighting create the feel of a boutique hotel.

Sail away From $2995pp, with regular departures from March to November 2023; vikingrivercruises.com.au.

The cruise For those with limited time, this seven-night trip from Civitavecchia near Rome to Barcelona gives you a sample of three countries, two big cities and several small ports.

Highlights La Spezia isn’t outstanding as a port but places you right on the Cinque Terre, where a string of brightly-painted villages cling to the Ligurian coast and dip their toes in peacock waters; it’s also the jumping-off point for visits to Pisa or Florence. 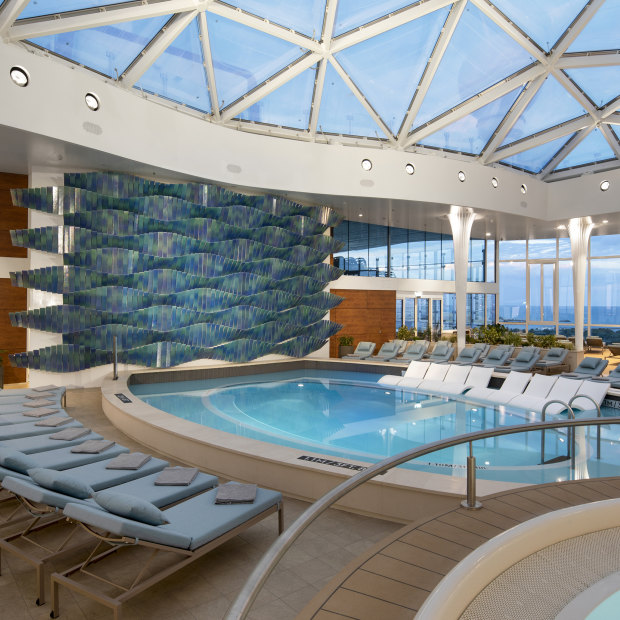 Ashore Cannes is an upmarket resort town to suit strollers and shoppers but also provides easy access to the other charms of the French Riviera. Palma on Mallorca has Arab-influenced architecture, a huge seafront cathedral and monasteries among olive and almond orchards in the island’s interior.

On board The 2900-passenger Celebrity Edge is a futuristic ship with the style and service of a luxury vessel and lots of on-board diversions without the rowdy atmosphere (or roller-coasters and water slides) of mega-ships. Among its standouts are a wellness area, a wide variety of restaurants and bars and an exclusive zone known as The Retreat.

Sail away From $1990pp, with regular departures from July to September, 2023; celebritycruises.com/au.

The cruise This 11-night journey from Amsterdam to Reykjavik sails through the Shetland and Faroe Islands and lingers in Iceland’s glorious landscapes.

Ashore Akureyri is a lively university town with good museums and a fine botanic garden. Stylishly modern Reykjavik has a rich cultural life, chic (though wincingly expensive) restaurants and great nightlife that continues until the still-sunlit wee hours. A terrific open-air museum at Arbaer allows a walk amid history.

On board The 694-passenger Azamara Journey is intimate and relaxed, with
a sociable buzz but no razzle-dazzle; the focus is firmly on the destinations. Azamara occupies a Goldilocks niche in cruising, with ships neither too
big nor small, and an upmarket feel matched with mid-budget price tag.

The cruise This 10-day trip meanders around the western Mediterranean, taking in both big and small ports in Spain, France, Monaco and Italy.

Highlights There’s no better start to a cruise than Monte Carlo’s elegant harbour, replete with billionaires’ yachts and overlooked by the palace and flamboyant casino. Portofino, too, oozes glamour: enjoy la dolce vita as you sip Aperol spritz by the harbour.

Ashore Rome, Pisa, Florence and St Tropez are all marvellous, but you’ll
be happily surprised by Marseille, with its revamped waterfront. Corsica’s capital, Ajaccio, is delightful, and take an excursion to Prunelli Gorges to appreciate the island’s rugged interior.

On board The 728-passenger Silver Nova promises a new ship layout for 2023 but Silversea devotees will rejoice at the return of dining venues La Dame (French), Kaiseki (pan-Asian) and Atlantide (steak and seafood).

Highlights Vienna (museums, palaces and coffee houses) and Budapest (glorious architecture at every turn) are the urban delights. The vineyard-draped Wachau Valley in Austria, dramatic 130-kilometre Djerdap Gorge (or Iron Gates) in Serbia and views of snow-capped peaks in Bulgaria provide outstanding scenery.

Ashore The small medieval towns of Regensburg and Passau are a delight to wander. Belgrade is a vibrant, gritty, interesting capital. Fortress-crowned Veliko Tarnovo in Bulgaria has a romantic hillside setting.

On board The 152-passenger SS Beatrice is elegant with its blond wood and blue-and-white finishes; only the marbled lobby veers towards the over-the-top decoration that pops your eyes on other Uniworld ships. The art, which includes Picasso sketches and Signoretto glass, is notable. Uniworld has top-quality nosh, so expect regional fine dining in the Mozart restaurant. Guests are well travelled, smart-casual and mostly American.

Sail away From $13,399pp, with regular departures between April and August 2023; uniworld.com/au.

The cruise This 14-day journey from Venice in Italy to Haifa in Israel is a glorious mosey through the western Adriatic, Greek islands and Turkish coast, with a stop at Paphos in Cyprus for good measure. 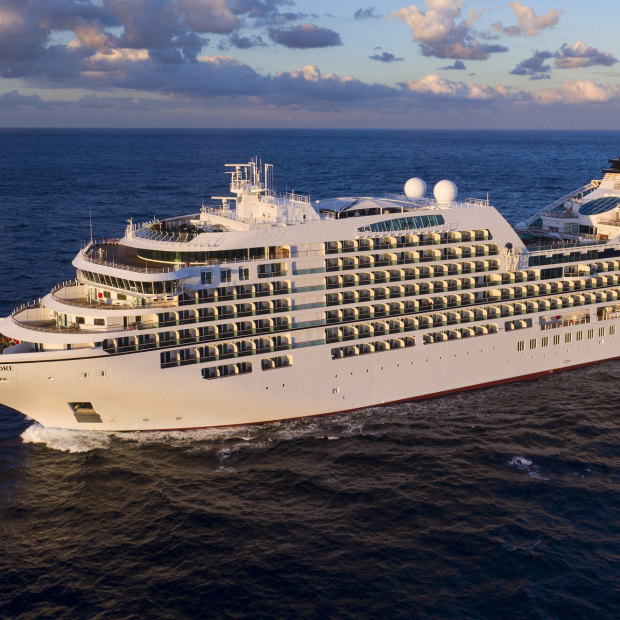 Ashore Vodice is a typical Dalmatian port of seaside promenades, wax-scented churches, Roman remains and red roofs. The islands of Corfu and Cephalonia have buxom forested landscapes and a distinctive culture influenced by Venetian, Italian and British occupation. Athens, Kusadasi (for Ephesus) and Rhodes provide lashings of history.

On board 600-passenger Seabourn Encore is an ultra-luxury vessel with marble-and-mahogany suites, an exclusive top-deck retreat with cabanas and hot tub, spiffy spa, and water-sports marina. Among dining options is The Grill, overseen by Michelin-starred American celebrity chef Thomas Keller.

The cruise This somewhat unusual 10-night return journey from Southampton stops at ports along the Atlantic west coast of France and northern Spain, with a notable focus on the Bordeaux region.

Highlights A lighthouse and sea-pounded fortifications announce Saint-Malo in Brittany, a maritime port layered with history, though many take the excursion to island abbey Mont Saint-Michel. Bordeaux is a fine city of Parisian-like architecture and bar-filled alleys; a two-day stopover provides time to visit limestone-golden wine town Saint-Émilion.

Ashore Naval port Brest has a fabulous aquarium, fishing port Lorient is a handsome town of lace shops and fish restaurants, and holiday town Biarritz is filled with elegant Napoleonic architecture. In Bilbao in Spain, admire the odd silvery angles of the Guggenheim Museum, a masterpiece of contemporary design.

On board 750-passenger Seven Seas Splendor, launched in 2020, offers some of the highest space-to-guest and staff-to-guest ratios afloat, and is a reminder that good service, elbow room and comfort trump glitzy amenities at sea. It’s all-balcony, all-suite and has top wellness and dining offerings, as well as a Culinary Arts Kitchen for aspiring chefs.

Make the most of your health, relationships, fitness and nutrition with our Live Well newsletter. Get it in your inbox every Monday.

Most Viewed in Lifestyle