Home » Sport » Basketball Players Who Are Too Tall for Their Own Good?

Basketball Players Who Are Too Tall for Their Own Good?

Seven years ago, Tacko Fall and Christ Koumadje were discovered by basketball scouts in a similar fashion.

They were hard to miss.

On the streets of Dakar, Senegal, the two 7-footers stood out. They were spotted by employees of the Flying Star Academy, a Senegalese training ground for several basketball players who have ended up on college teams in the United States. The employees chased after the teenagers, imploring them to try their enormous hands at the sport.

At the time, Koumadje, now a 7-foot-4 senior at Florida State, preferred soccer. Fall, now a 7-foot-6 senior at Central Florida, was more interested in devouring anime and manga series like “Naruto” and “Tokyo Ghoul.” Both were, at first, indifferent to basketball.

But their potential upside was difficult to ignore. To onlookers, they evoked thoughts of the next Hakeem Olajuwon or Yao Ming.

Today, their size offers less promise. They toiled to become giant forces in the paint, only to watch as basketball evolved from a game that coveted height into a more freewheeling, 3-point-centric game that deems their skill sets nearly as obsolete as a fax machine: nice to have, but no longer entirely necessary.

“What’s interesting about both, their advanced analytics, they play off the charts — well over 1 point per possession, and that’s really effective in college basketball,” said Steve Kyler, the editor and publisher of Basketball Insiders, which produces weekly N.B.A. mock drafts. “When you dig deeper, in situational-type things they grade really well, but the truth of the matter is the N.B.A. game isn’t played that way anymore. It’s all about stretch 5s, quickness.”

“I think they may get a look on the fringe based off their size,” Kyler added. “But a guy 7-foot-6 being the first overall pick or top five is pretty rare now.”

In the college game, where height can still create a tangible advantage, Fall and Koumadje — who are among the tallest players currently in Division I — will be crucial cogs in their teams’ N.C.A.A. tournament performance.

Beyond that, whether they can find a place and purpose in the N.B.A. — where the only active players who stand 7-foot-3 or taller are Dallas’s Kristaps Porzingis, who has a far more diverse skill set, and Philadelphia’s Boban Marjanovic — remains to be seen.

“Extending my range is something I definitely want to work on,” said Fall, who helped the Knights earn their first N.C.A.A. tournament berth since 2005 by averaging nearly 11 points and 7 rebounds a game. “I’m not going to go out there and shoot 3s like a lot of bigs do now, but pick my spots.

“But I feel like no matter how the game has changed, you still need somebody down low to do some damage.” 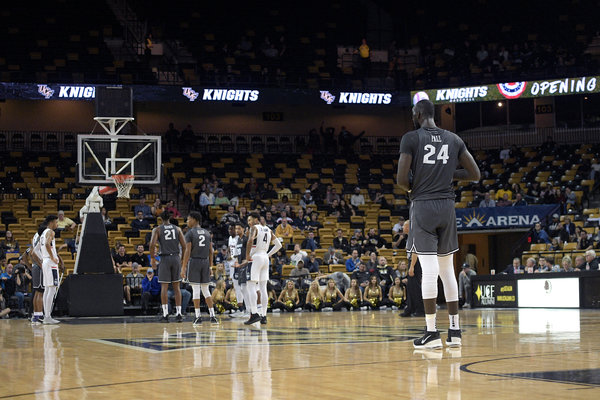 Basketball academies in Senegal like Flying Star now regularly send players abroad. After playing for a few months at the academy, Fall got a chance to join a high school team in the United States. His mother reluctantly let her son go, hoping he would receive a better education.

Extremely raw when he arrived at Liberty Christian Preparatory School in Tavares, Fla., Fall almost quit basketball. But he refined his game while playing on a travel team alongside Ben Simmons, now with the Philadelphia 76ers. Fall also trained in Houston with Olajuwon, a Hall of Famer who emphasized the importance of footwork for a center his size.

Occasionally, Fall watched Simmons at nearby Montverde Academy, where Koumadje landed after coming to the United States. Fall and Koumadje only briefly overlapped in Dakar — Koumadje is originally from Chad — but in high school they talked on the phone or via Facebook. Their discussions rarely veered into basketball. Instead, they commiserated about the difficulties of adjusting to life when you are over 7 feet tall and 4,500 miles from home.

Koumadje, like Fall, grasps the unlikelihood that he will develop into a free-shooting N.B.A. big man. Before his senior year in high school, he played pickup games at the University of Southern California with Andre Drummond of the Detroit Pistons. It was then, Koumadje said, that he realized he was more effective cemented in the post.

“The game is evolving and that’s what people want,” said Koumadje, a two-year starter who led the Seminoles in blocked shots this season. “But I play to my strength. That’s what I do.”

Fall’s turning point came after his sophomore season at Central Florida, when he contemplated entering the 2017 N.B.A. draft. Five teams told him he needed vast improvement adapting to the speed of the pros, particularly in guarding pick-and-rolls.

Central Florida Coach Johnny Dawkins — a former Duke guard who played with the towering centers Shawn Bradley and Manute Bol in the N.B.A. — was hired before Fall’s sophomore year, and created a three-year plan for him. Increasing mobility and stamina came first, followed by catching the ball down low and learning to work out of double and triple teams. This season, Dawkins has moved Fall farther out on the perimeter defensively.

Wherever he stands, Fall often forces opposing players to elevate more when they shoot, to get the ball over his arms.

“Our floaters have to be a little bit higher, and it probably screwed a couple of guys up,” Fran Dunphy, Temple’s coach at the time, said after a game against Central Florida on March 9.

Teams have tried less inventive strategies to bypass Fall’s 8-foot-4 wingspan. Fall, who is bulkier than Bol or Bradley, said that he had heard opposing coaches tell players to go after his knees.

Though he is all but assured of breaking the Division I record for career field-goal percentage — he currently shoots over 74 percent; the record is 67.8 — Fall converts only 36 percent of his free throws. Fall — whose hands are 10½ inches long — said that when he shoots free throws it feels as if he is holding a volleyball.

His shooting form, which involves using only his right hand while flinging his left arm in the air and then slouching, has drawn derisive comments on social media, where he is sometimes treated as a sideshow. After Fall had 13 points and 10 rebounds in a win over Houston that ended the Cougars' 33-game home winning streak, Fall got more attention for a GIF that showed him holding the ball over an opponent’s head like an older brother playing keep-away.

Fall and Koumadje are accustomed to stares in airports and snide remarks from opposing fans. While both harbor N.B.A. dreams — neither appears in most mock drafts — they also envision a life beyond basketball, when their height won’t dictate how others perceive them.

Koumadje said he would eventually like to work for the United Nations, helping refugees in Chad. Fall wants to become an engineer.